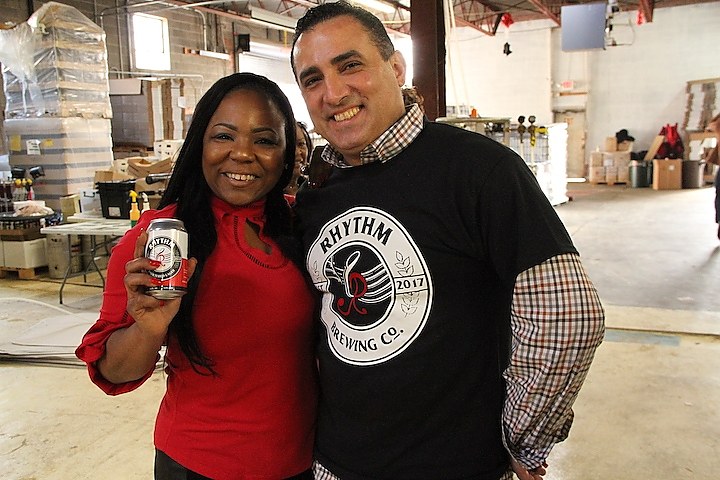 For Alisa Bowens-Mercado, a love affair with beer brewing didn’t start in the warm, hoppy air of Overshores Brewing Co. earlier this month.

It didn’t start at the brew festivals that she learned to frequent with her now-husband John, as their friendship bloomed into romance over summer lagers, pilsners, pumpkin ales, and the occasional cider.

It didn’t start when she looked around Westville, and realized that she wanted to own something more than her salsa studio now that it was almost two decades old.

Nope. It started on the toilet, with one potty-training Alisa and one upturned pony of Miller High-Life.

Bowens-Mercado brought that story to a recent episode of WNHH-LP’s “Kitchen Sync,” taking listeners through her transformation from curious toddler to owner of New Haven’s brand-new Rhythm Brewing Co., the first Black- and woman-owned brewing company in the state, and one of just a handful in the country. On Saturday March 10, the company will celebrate its official kickoff at Vanity Nightclub from 3 to 7 p.m.

Rhythm Brewing Co. is currently known for a single product: a small-batch unfiltered lager, brewed at Overshores Brewing Co. in East Haven. Bowens-Mercado said she chose the product because it was what she wanted to be drinking herself. Stouts and porters didn’t sit well with her. Imperial Pale Ales (IPAs) were too bitter. Even some wheat beers left her feeling weighed down.

“I was like ‘I know this is what you make, but I can’t drink that,’” she recalled telling craft brewers most familiar with IPAs. “So I was very selective with coming up with that taste.”

But it’s a love that goes way back. At just two years old, Bowens-Mercado was playing with an empty can of Miller beer when she took a seat on the toilet to work on her potty-training skills.

One of her parents—she can’t remember who—snapped a photo. The image went into an album, well-loved by family members as Bowens grew up, moved away from home, and opened her own business in New Haven. It lived largely out of view until a few years ago, when the image caught her eye on a visit to her parents’ home in Bethany.

“When I saw the photo, I was like: ‘This is gonna come to fruition one day,’” she said. She had already been thinking about starting a beer company in the city, ready to compete with a craft beer scene full of stouts, porters, Imperial Pale Ales (IPAs), and funky, sour beers. Inspired by the image, she moved forward.

It wasn’t out of left field. Born and raised in New Haven, Bowens-Mercado grew up watching the women in her life drink beer, trading stories and occasional gossip over sweating cans and bottles. She loved sitting with her grandmothers, listening to their life stories unravel over cool cans, the hops sweet on their breath.

“When I started getting into this beer thing, I’m like: ‘How do I pay my grandmothers some homage?” she said. “One beer festival later, that’s it.”

So Bowens-Mercado plunged headfirst into research. She discovered that the odds weren’t in her favor: In the United States, there are only “about eight or nine African-American brewers,” and only three of them are women (Bowen now makes the fourth). There weren’t any she could talk to for advice in New England; the closest, in New York City, was Harlem Brewing Co. owner Celeste Betty.

“It was just disproportionate, she added. “There was really no portion, so I wanted to introduce people of color [to beer]. Some of them, you know, they’re ashamed to ask: What’s craft beer?”

She knew that she wanted a lager—unfiltered, “with all the good stuff,” and none of the yeast stripped away—and started to reach out to potential partners three years ago. It took her a while to convince anyone on Connecticut’s craft beer scene that it was a worthy choice, she said. First, she went to “the IPA guys,” who shrugged her off.

“They were like ‘Ugh, a lager?’” she recalled. “It’s interesting because three years later, many of them have come out with a lager.”

But Overshores Brewing Co., just over the city line in East Haven, came into the conversation ready to listen. Known for some of the small-batch brewing that it does with the new-old Hull’s Export Lager, Overshores seemed to Bowens-Mercado like a tight fit. One moment, she said, they were confirming the ingredients that would give the beer the taste she wanted. The next, they had somehow arrived at canning day, and she was doing salsa in sneakers on the factory floor.

“It was really, honestly a collective effort of the beer industry family,” she said of the experience. Of Hull’s specifically, she added that “We help each other to build our brands. We’re New Haven—we’re out of New Haven. That’s important. We want people to support local. Not just support Connecticut, but support things that are coming out of the city.”

Now, she said she wants to spin that support into a conversation about making craft beer accessible. On an early distribution run—the beer is going to independent businesses and restaurants around the state first, before it hits big stores—a young guy stopped her outside of a store, and asked her what a craft beer is.

“I felt humbled and honored to open up that dialogue,” she said.