Chad Browne-Springer was airborne. Mouth kissing the mic. Arms slicing the air in front of him, then swinging like a marionette to the back. Barely attached to his feet, a pair of red sneakers landed on the stage, then lifted off again.

“Take me to the motherland” he crowed, his whole back bending with the words. In front of the stage, complete strangers turned into dance partners, bodies propelled by a pumping, persistent bass as they put down their drinks and picked up their feet.

That groove underscored Phat A$tronaut’s release party for The Fifth Dimension, the band’s inaugural EP, at The Acoustic in Bridgeport Saturday night. On a bill with Bridgeport’s The Telle, Brooklyn-based Wooly Mammals, and Sasco, the group played into the wee hours of the morning, keeping the crowd moving for its entire set. The Fifth Dimension follows last year’s album release of a live show, recorded at New Haven’s Pacific Standard Tavern.

Recorded between Gold Coast Recording, Blind Moose Studios and Mexican Summer, the seven-track release fuses spoken word, hip-hop, rap, rock, rhythm and blues, psychedelic funk and electronic. On lead vocals, Browne-Springer spins silk into song, pulling out whip-smart lyrics and a voice that is confident and muscled one moment, pleading and lovestruck in another.

Around him, an ever-growing band blooms into action: metal-raised Mark Lyon on guitar, a masterful Tim Walsh on drums (an equally virtuosic Travis Hall plays in the group, but Walsh is on the recording), Dylan McDonnell on flute and sax, Jeremiah Fuller holding it down on keys. It’s a sound that’s jammy but full-bodied and alive, with nods to South African mbaqanga, electronic, and Lucille Clifton in one song, and Kendrick, M&O, and George Clinton in another. Tracks are obsessively tight and polished, the kind of music that you can let yourself sink into completely.

“We’re gonna try to make great groove-based movement that is translatable, that is accessible everywhere,” said McDonnell before the show, noting that the EP was a collaborative effort—members of the group recorded in pieces, instead of together. “It’s been a really fun journey.”

That doesn’t just translate to their live performances—it expands there, buzzing with energy. To the drums and saxophone that announce “Front Row,” Browne-Springer came onto the stage Saturday wearing a huge, glittery motorcyclists’ helmet, made ready for space travel by mirror-like shards and red, gem-like stones around the edges. The disco ball at the center of the room didn’t stand a chance: it had already been eclipsed.

Seen your ass before/You come to shows/Front row/You get lost in the sound/The loud is pounding/Out of my tune/Out of my tuuuune Browne-Springer crooned as the helmet came off, sidling up to vocalists as his voice rode up the notes. Move your hands and sway/You’re breathing in, let it out/You got some stress from the world...

Around him, phones came out and started recording, bodies and arms swaying with the lyrics as the crowd multiplied, then multiplied again. The front row moved up toward a speaker. Browne-Springer rocked back and forth onstage, vocalists Anthony Moaton, Elizabeth Dellinger and Ruth Onyirimba dancing as they accompanied him. Acrobatic and grinning—Saturday also marked his 34th birthday—Lyon threw his whole body into his guitar. Behind him, Hall went to town, a smiling Anonymous, Inc. mask strapped to his face as sweat began to pool around the edges. 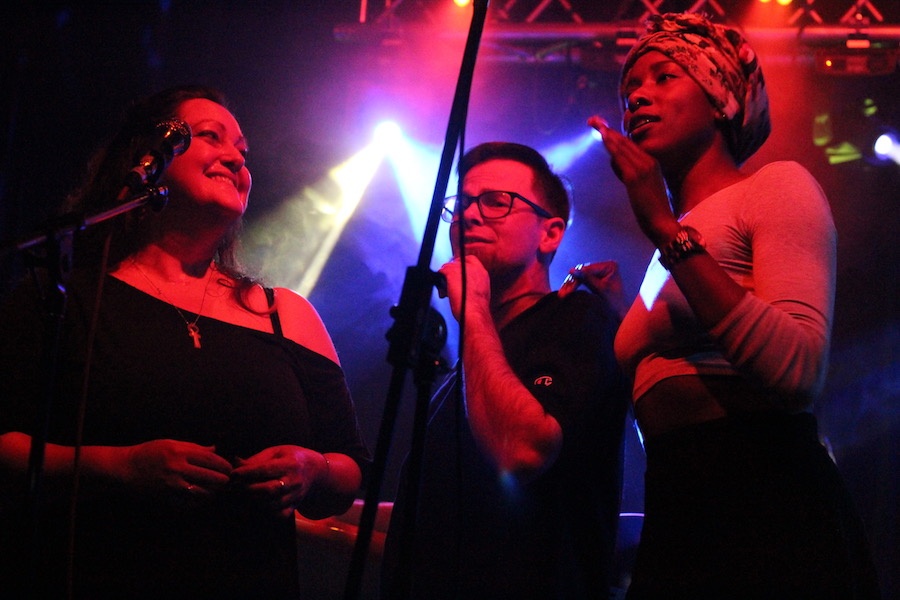 The group flowed into “Puppy Love,” Browne-Springer’s wordplay in full force as the band gave a disarmingly smooth beginning to the sharp-tongued ballad, where every sentence rolls out as a polished thought, and some come as a friendly promise. As green and pink light bent around musicians, band members jammed around the stage and in place, some orbiting each other while others swayed at their microphones.

They kept pulling out surprises, songs steeped in history (but completely their own) that doubled as open invitations to dance. Weaving in Ben E. King’s “Stand By Me” with Moaton and Onyirimba, Browne-Springer’s original “Motherland” came through as a cheeky and overdue sort of conversation with Paul Simon, Mike Knobloch getting particularly rhapsodic on percussion in his last show with the band. 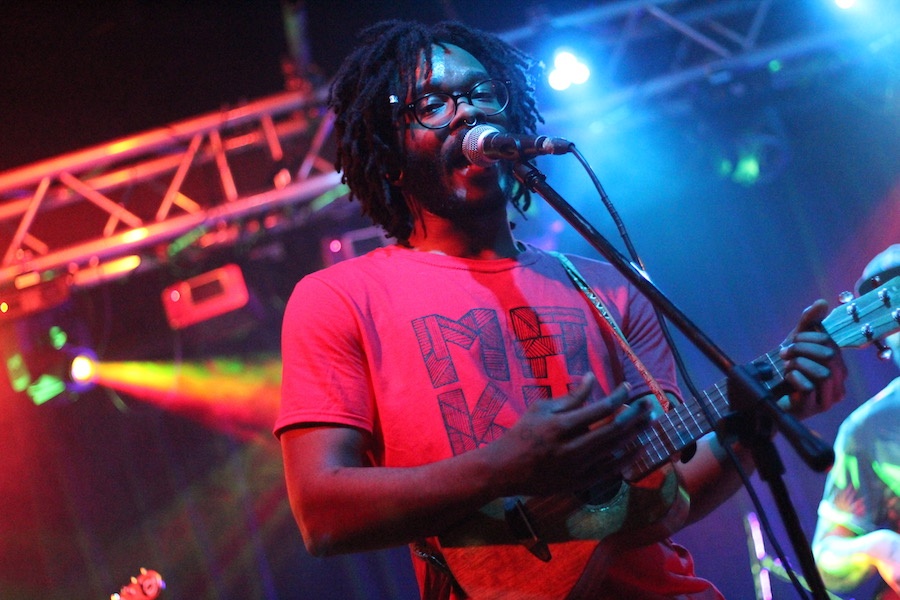 From the front to the back of The Acoustic, crowd members bobbed, some letting loose as the lyrics flooded the space. As they cheered in the end of the piece, the group gave them one last surprise: a rock cover of Cat Stevens’ “Wild World,” that had Browne-Springer literally lifting off of the stage.

“It was a long process to create and make, but the outcome of the collection of minds is beautiful,” he said after the show, cooling down on a sidewalk outside. “I think since the fusion of the band, the creation of the band, everything’s been happening organically. It just falls from the music.”

“We just keep going cause it just works!” he added. “Why not? We all love doing it, and we all love each other. We just want to keep creating. To love what you do—it seems like a reason to live, right?”