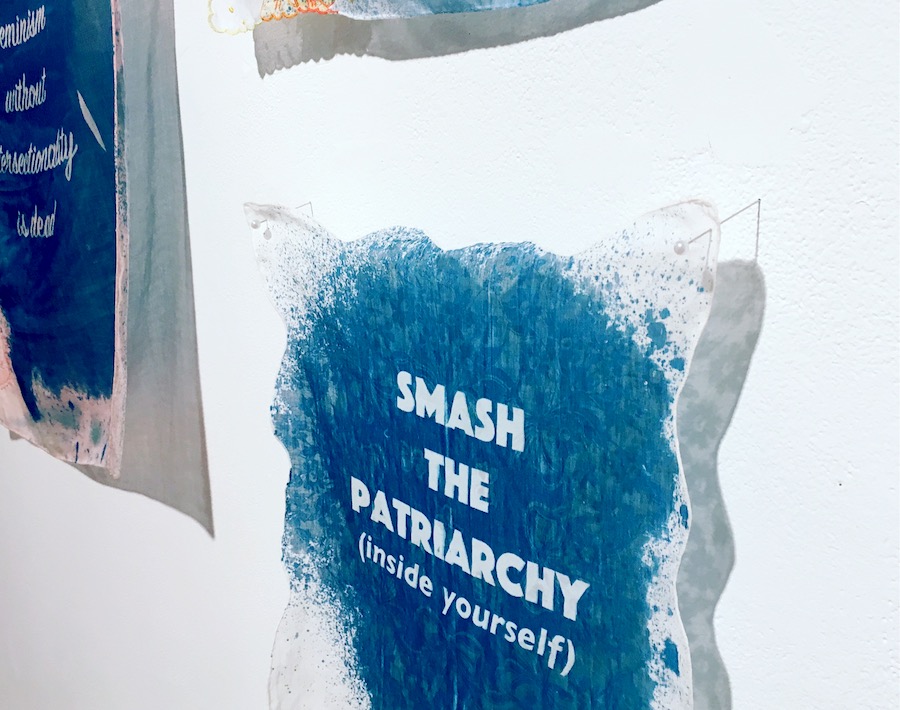 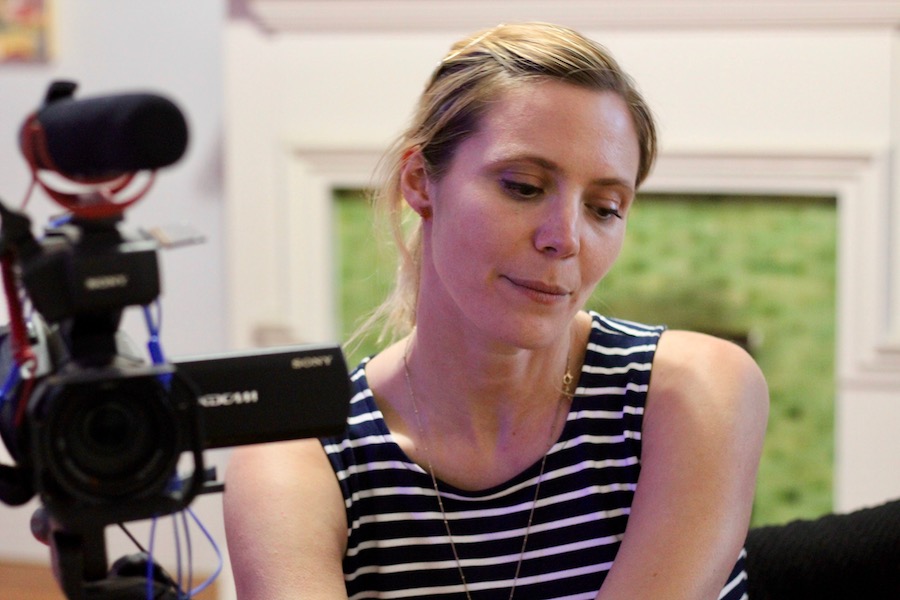 In the corner of a room, a camera sits at the ready, viewing window popped out and focused on a hard, folding plastic chair. Above is a sculpted hashtag, painted pink, with a smooth and nipple-like blob in the center. Elsewhere on the wall, a portrait of a woman shows her completely still. The chair waits eagerly, ready to be filled with a body, and a story of how it got there. 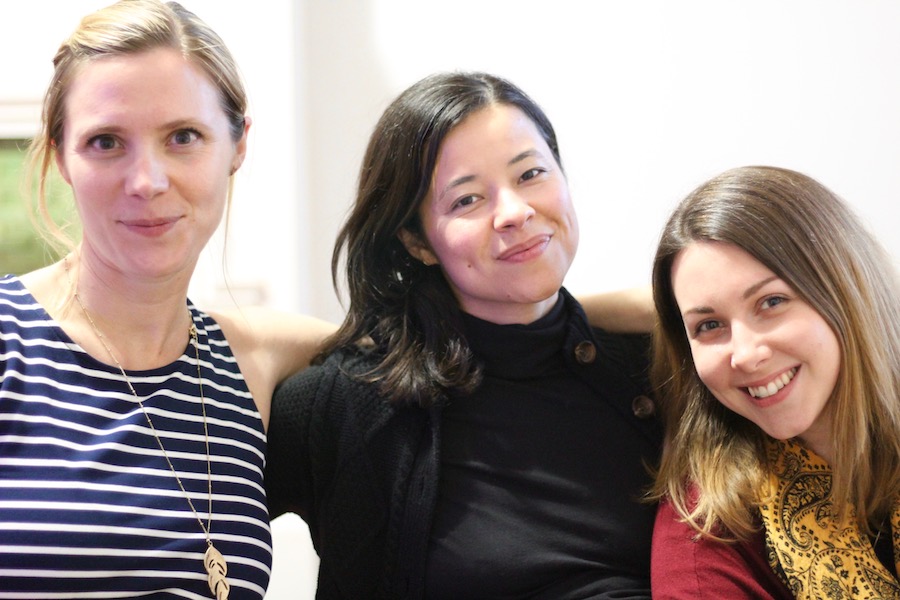 Louisa de Cossy, Lucy McClure and Abbie Kundishora, all . of whom are working on the project.

Participants hoping to tell their #MeToo stories have options: they can go fully on record, with video showing their face; they can record in silhouette; they can just do audio; they can write their testimony in a Nasty Women Testimonials journal; or they can submit to an anonymous google form.  McClure and de Cossy will continue collection this Saturday afternoon at the Ely Center. More information here.

“When it comes to the theme, it’s important to develop many types of platforms to collect those stories,” said McClure Thursday night, at the closing reception of Nasty Women Connecticut’s “Silence Breakers” exhibition. “We need to be sensitive to them, but at the same time we need to allow them an opportunity to not only feel safe, but to share their story.”

The project is funded by a $2,500 Neighborhood Cultural Vitality Grant, distributed by the mayor’s office earlier this year. Originally, it was set to run from March 24 through April 7, but only seven or eight testimonies have come in. Now, McClure said she is planning to keep the project going, and expand it to colleges and universities in the region, cities like Bridgeport and Ridgefield, and well as grassroots organizations like Unidad Latina en Acción.

Per the grant’s framework, Nasty Women Connecticut must present the testimonies, in oral and documentary form, before the end of the summer. McClure said she is shooting for late May, when they have a screening lined up at the Kehler Liddell Gallery in Westville. 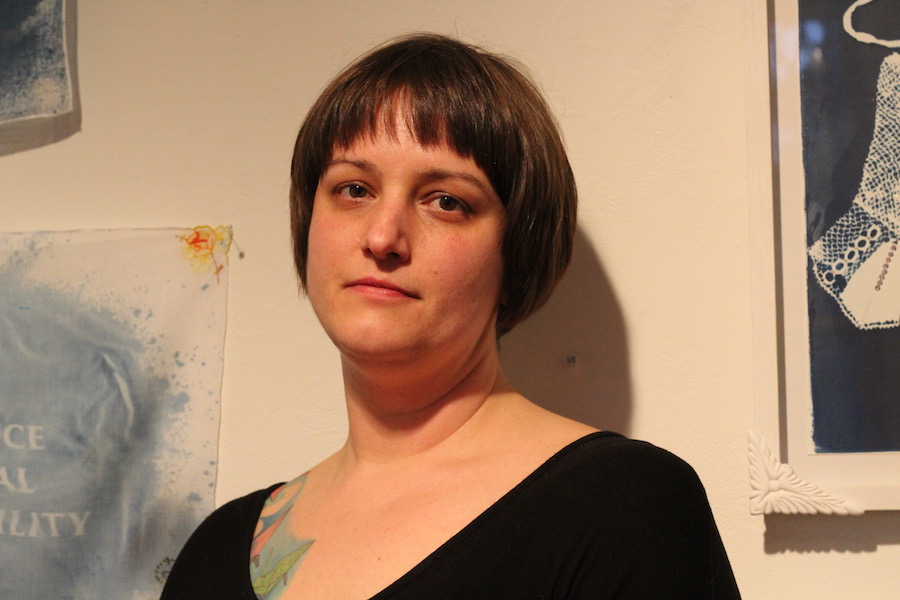 Maderson-Quinlog: “I’m sharing these super painful experiences in the hopes that someone can say: That happened to me too, and I know I’m not alone.”

She added that there’s been steady interest. Generally people call in advance, or message her via email or Facebook. Thursday night, new participants trickled in and out of the recording room, the dark wooden door closing behind them, then reopening several minutes later.

As the New Haven Resistance Choir broke into “The Sound of Silence” downstairs, artist Aly Maderson-Quinlog emerged from the room, her/their testimonial safely lodged in the camera’s memory card. She/they walked down a long hallway to her/their works, delicate, translucent handkerchiefs splattered with blue, bearing blocky white slogans like PRACTICE RADICAL VULNERABILITY and SMASH THE PATRIARCHY (inside yourself).

Maderson-Quinlog was sexually abused as a child, then raped in college. For years, she/they were silent about it, overwhelmed with “this impulse to just hide” because of the people she/they knew would not believe her.

“It took me a long time to feel comfortable doing that,” she/they said of the testimonial. “I was always doing that as an artist, but I wasn’t aware of it. Now, it’s just really frustrating because it’s in the news everywhere, but I think there’s still this fear.”

“I’m in recovery, so I know the power of sharing my story,” she/they continued. “I’m sharing these super painful experiences in the hopes that someone can say: That happened to me too, and I know I’m not alone.”

She/they said they have started thinking of a new art project, in which she/they write letters to their past selves.

“I’m thinking about what comes next,” she/they added. “Like, after we share our pain—how do we process it? I’ve just been with the #MeToo movement—which is an older movement—but there’s this kind of confessional thing that’s happened with social media. It’s like—after we confess these painful things, what are we doing about them next?”