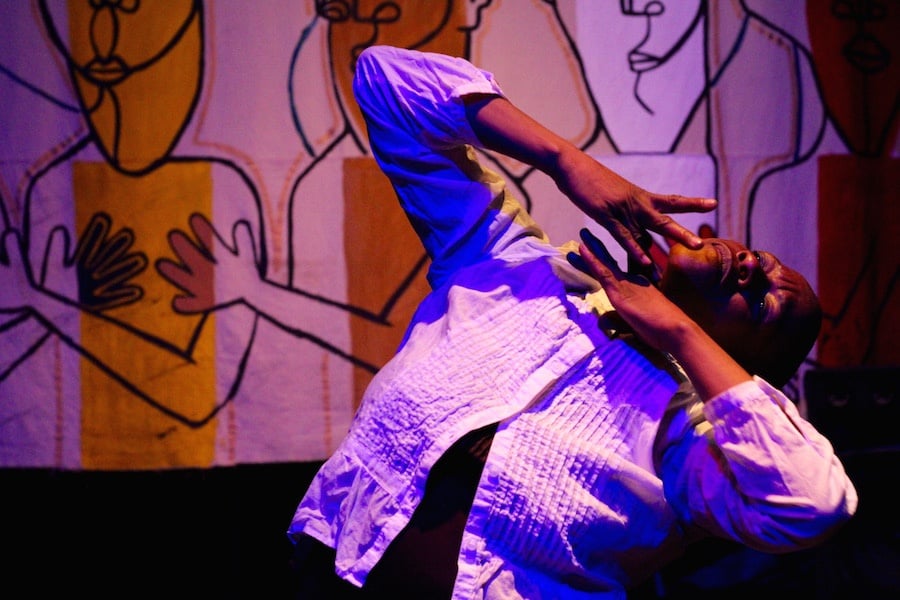 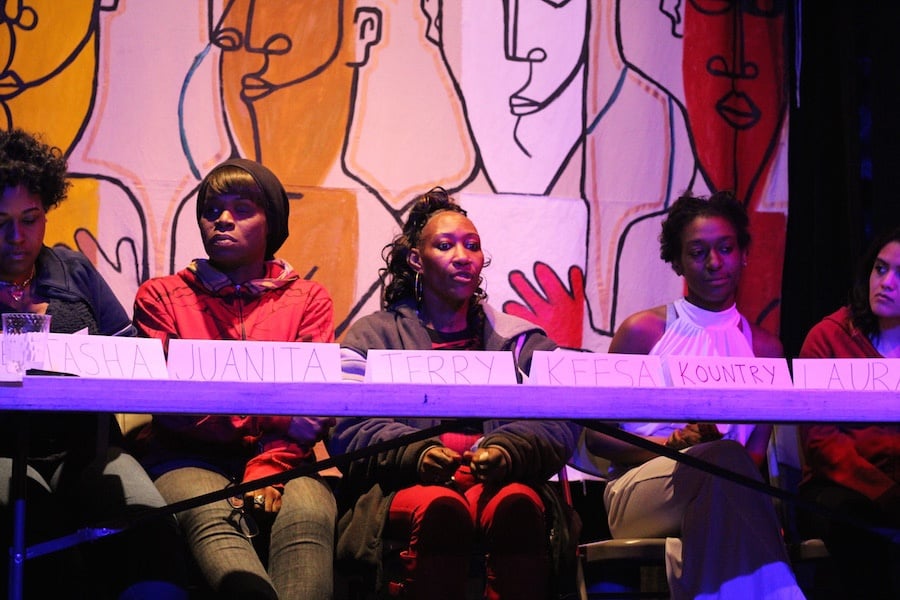 "I’d want women to know that they’re not alone," said panelist Keesa Figgs Desilva in an interview before the panel. During the panel, she added: "Let's bring these women home." Lucy Gellman Photos.

A mom whose paid bail meant that she got to spent Mother’s Day back with her kids and grandkids. A neice who gets to see her aunt not behind bars, but at the dinner table, where they could eat as slowly as they wanted. A daughter who “did one stupid thing,” and is now fighting a case to show that she’s changed her behavior.

Saturday evening, these women gathered with close to 150 people at Bregamos Community Theater for the Connecticut Bail Fund’s Mother’s Day Bail-Out, a fundraiser, letter-writing campaign and bail out effort inspired by the Black Mama’s Bail Out by Southerners on New Ground (SONG) last year. That bail out raised over $200,000 to bail out 65 women in time for Mother’s Day 2017. 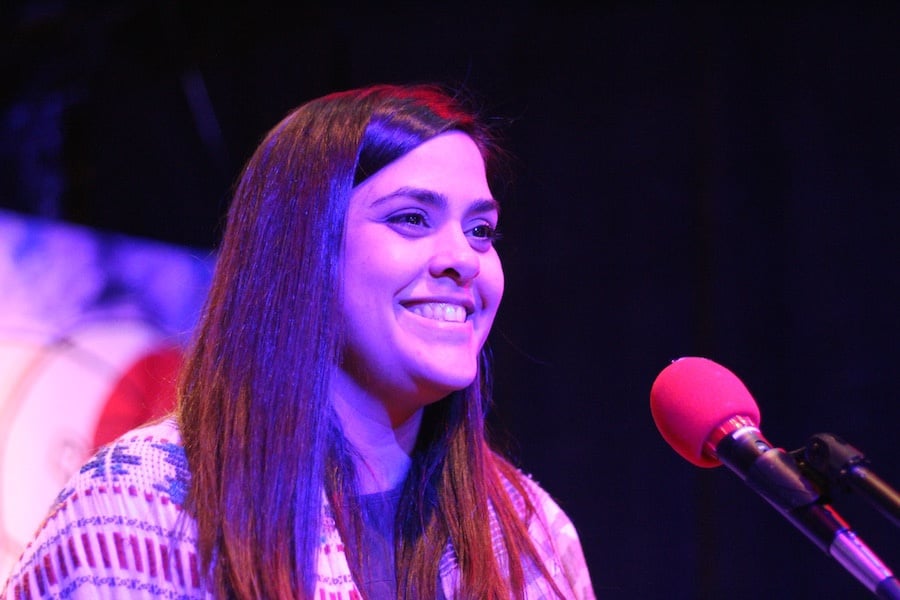 Ana María Rivera-Forastieri: "Every single day in the United States, over 500,000 people are caged due to poverty."

At the event, Bail Fund Co-Director Ana María Rivera-Forastieri said the goal is to raise at least $30,000 by Mother’s Day, which will allow the fund to pay bail for 30 women. She added that an anonymous donor has agreed to pitch in $10,000 when the Bail Fund reaches the first $10,000 mark.

In addition, the Bail Fund is seeking to “shed light to the abusive and inhumane conditions that women experience at York Correctional Institution,” the only state-run Connecticut prison for women. Currently, Rivera-Forastieri said, 300 of the over 900 women at York are awaiting charges, but unable to go home because they cannot pay their bail.

“Every single day in the United States, over 500,000 people are caged due to poverty,” said Rivera-Forastieri before a panel of women, moderated by SWAN Director Beatrice Codianni, took the stage. ”They have not been convicted of anything, but are rather there because they aren't able to pay bail.” 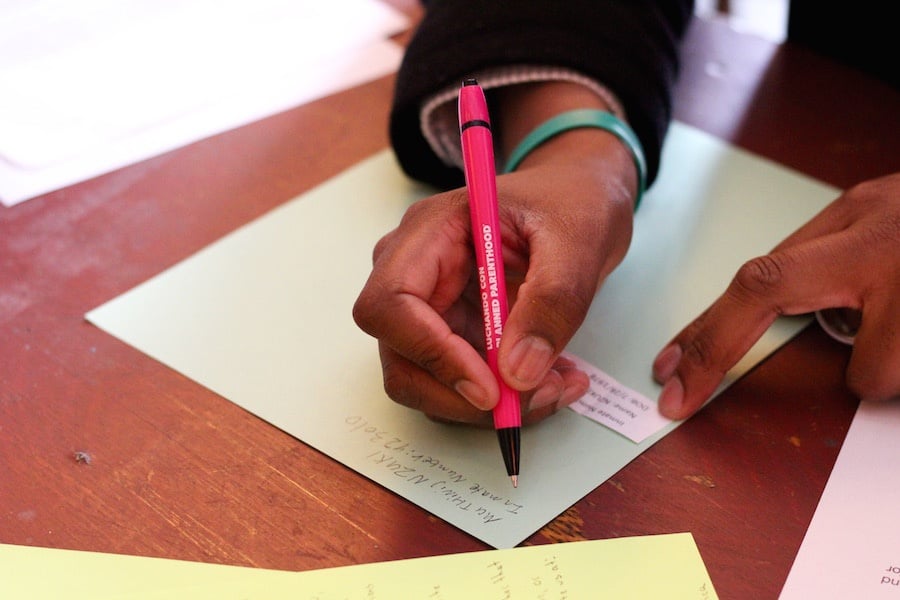 Hamden City Council Member Justin Farmer writes to one detainee at York Correctional. As he was writing, facilitator Monica Bunton spoke about the project. "The main point of this is just to give these women hope," she said. "To let them know that there are people thinking about them. I have never been incarcerated, but I can imagine it's very lonely ... especially at York, where the conditions are beyond inhumane."

As letter writing to detainees unfolded at the back, a panel of formerly incarcerated women assembled at the front, a full audience packing the space as they spoke. Here are some of their stories.

Nicole Kennedy ended the program with a rhapsodic and lyrical dance.

I gave birth in Rikers Island. And somewhere in the middle of giving birth, they shipped me to Bedford Hills. So I gave birth at Bedford Hills. I kept my daughter for a year in jail. The first year of her life. She’s still asking me: Why does everybody look the same? I said it was on sale at WalMart. Because we all had the same uniforms on.

My children were loved by women that will never ever see their children again. For the love of that, my children are blessed today. That they still hear from these women. They still write them. I don’t know if anyone’s heard the story of Judy Clark [Clark was sent to prison in 1983 with a minimum of 75 years]. She was a pro-activist, fighter. Judy was my daughter's babysitter in New York. Judy’s never coming home. But she knows my daughter Raquel.

I met a lot of beautiful women in my life during that time, that without them and their knowledge and their love, I wouldn’t be able to be sitting here today.

Life is what you make it. I made wrong choices. And I paid for that. So today, I live for that.

I’ve been there. Prostitution. Drugs. Addiction. I’ve been there. I’m not ashamed of that. What I’m ashamed of is that we need more people like you [to the crowd at the fundraiser] … to help us support to get more women out, to let them know that this is real. There’s women walking up and down Ferry Street right at this moment that don’t know there is hope.

In an interview before the panel, Kennedy had expanded on this point.

And my thing is this: If I can help another woman to avoid the trenches and the trials that I had to go through, I’m gonna support.

If I can do anything to help, I will. Incarceration is not the way to be. Praising him, loving yourself and realizing with the help of others—no one can stop you. And with this group right here … I believe that we are going to be able to make a change.

The one thing I hope to give other women is to let them know, they are not alone. If anything else, they are not alone. When they cry at night, and they think that they can’t make it—realize there’s another woman probably right next door to you who has the same tears. And together, we can fight this and overcome it. 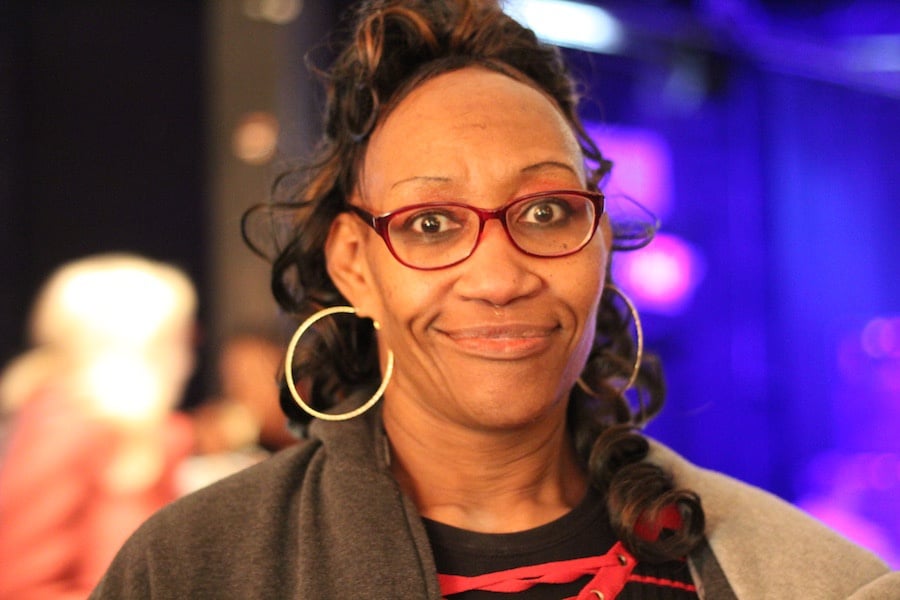 I lost my apartment and got arrested the same day. The judge, prosecutor and public defender wanted me to take six months to a year in jail for something I didn’t even do. I let a girl stay with me, and her and her boyfriend was robbing houses. I got caught with 39 different IDs, credit cards, debit cards, checkbooks.

But I was in the hospital the times that the robberies took place. I had a doctor’s alibi that backed me up. There was no way I could be in a coma and robbing houses at the same time.

But I lost my apartment. I got evicted, and then I was sleeping out in the streets, and the cops—New Haven police—target me for being in a park after dark. I got caught with all these [IDs] in my book bag that wasn’t even my book bag. They placed it in my kid’s book bag.

I was in jail for a week. I almost died in jail. I’m a diabetic, and my sugar dropped down to 22. I buzzed the CO [correctional officer] four times to tell him my sugar went too low. The CO never came to check on me. A nurse came by by chance, and noticed that my sugar was dropped. And he gave me eight glucose sticks to bring my sugar up. And it only came up to 100.

The next morning, [Bail Fund Co-Founder and Executive Director] Brett Davidson came. He said: Do you want me to bond you out? I thought he was a joke. I didn’t think that he was serious. I said: Yeah, bond me out. By the time I got back to my unit, they said: You’re bonded. And I said: What? This man was serious?

He went to every court case I had. I had six different court cases. Six court dates. He stuck right there with me. That was God, giving me another chance. And I’ve been working for him full time.

If I would have stayed in jail, I would have had no choice but to take what the court wanted to give me. And I would have pleaded guilty to anything so I could get out early. But because Brett bonded me out and I was able to fight my court case on the outside, I was able to win.

I’d want women to know that they’re not alone. This right here is to let all women know, incarcerated and out, that we are here for them. That we are going to fight and bring them home to be with their kids. 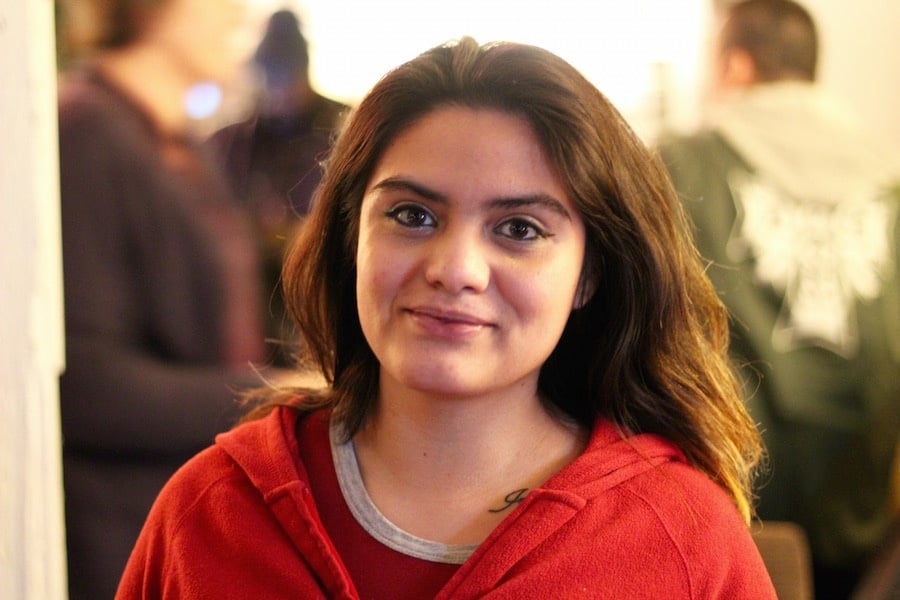 I was walking down the street when I got offered a ride. Later on, a lot of stuff started happening. The police came ... I ended up getting detained. I spent at least four months in there [prison] going back and forth in court, and never really getting hope to get out.

It was miserable. Nights were exactly like days. Time, honestly, it stops for someone in there. Not only do you feel lonely in there, but you go through so much depression. A lot of people have committed suicide. Just like there is suicide awareness out in the world, in there it should be a lot—people should look into it. In there, you want to kill yourself. I had those nights that I sat there. I wrote my suicide letter once. It got really bad.

And then—I don’t know how, I honestly don’t—I ended up trying to calm myself down. I had the letter right there, written. Saying goodbye to everyone including my 5-year-old son, all because I gave up hope. When I was in there, I had no one but my mom.

What I would hostly say to anyone, everyone that’s in there? Don’t give up hope. Keep strong. I know things are hard right no, but it will get better. I’m still fighting my case, and what scares me is the chance that I’m going to go back there. That chance, it’s still there. I stay home now. I don’t go out at all, unless it’s with my mom to the grocery store. Other than that, I’m home all the time. 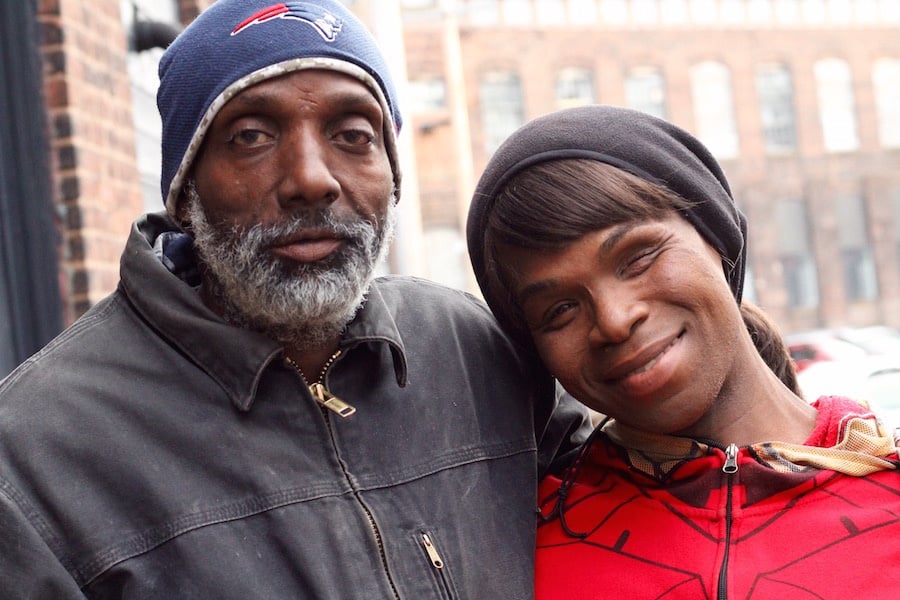 I was incarcerated at 16, I was released at 26. So I did a 10-year bid. It wasn’t pretty. I obtained some war wounds in there. I’ve experienced being sexually harassed by officers and things like that, but I made it. And I’m here to tell you that.

It’s time that somebody needs to speak out. And by me experiencing it myself, I look back and I say: If I’d had these people [the Bail Fund] out there when I went in, it would have been much better for me. But now, I can be here for somebody else as well, to speak out and to help the movement go further.

It’s very very important to have somebody there for you. I mean, you know, someone to talk to besides God—cause that’s the first person you talk to when you on the paddy wagon. But besides him, yes, you need that sense of comfort from a letter, a phone call, a visit—things that you would never cherish, you put everything into it. You can’t describe it. It’s just like darkness. Darkness with no light at all. No light at all.

But then when you get that visit or you make that phone call and you get contact—it’s like everything lights up again. It’s like the sun piercing through the building. All the walls just fall down. Nothing else matters but you and that person, or you and that letter.  It’s very important to stay in contact with these women, or your sons, or whomever it may be in this situation. Because that support could get them through a lot that they’re going through in there.

And it’s also a chance for them to tell you what’s going on in there, cause it’s not right inside those walls. Especially when you’e not getting no visits or you don’t have no visits. When nobody cares for you out there—they really treat you like a piece of shit. That’s when it al starts crumbling down. We don’t want that to happen to out people, our families, the ones we love. So let’s just keep that in mind, and help keep this program runnin.

During the panel, Terry also spoke at length about being transgender in prison. The video of the panel is below. To find out more about the Mother's Day Bail Out or donate, click here.