Immigrants Land On The Green 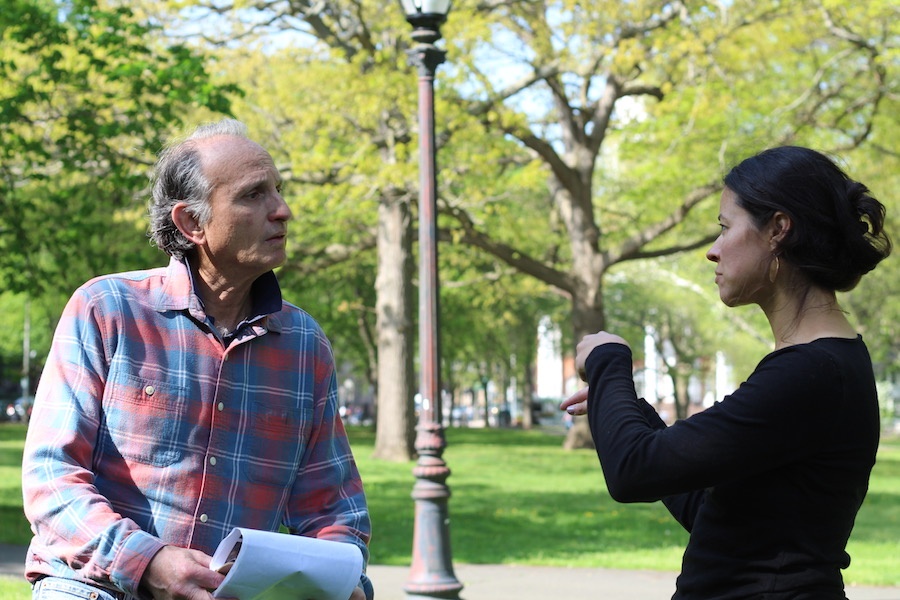 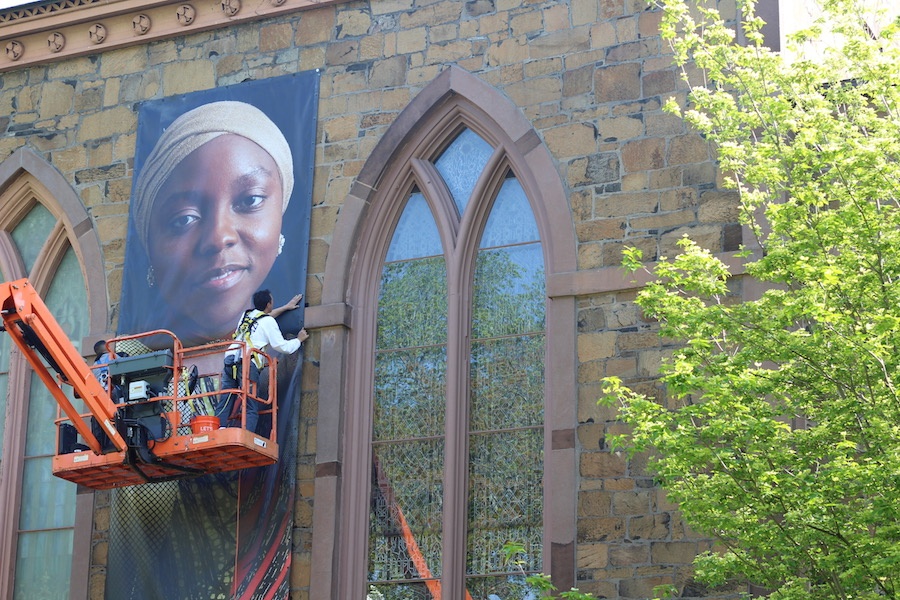 32 immigrants and refugees will arrive on the New Haven Green this week, and remain there through August. You won’t be able to ask them their stories though—that will require a literal closer look. Lucy Gellman Photos.

32 immigrants and refugees will arrive on the New Haven Green this week, and remain there through August. You won’t be able to ask them their stories though—that will require a literal closer look.

They mark the latest chapter in “WE ARE: A Nation of Immigrants,”  a new, large-scale photo installation covering the New Haven Green and the sides of Trinity, United, and Center Churches on the Green. Organized, shot and curated by photographer Joe Standart, the installation will ultimately feature 32 portraits of New Haven’s immigrant community, with QR codes by each image linking to audio and video stories. Installation began Monday afternoon.

The project, held in conjunction with the International Festival of Arts & Ideas, is a collaboration among Integrated Refugee and Immigrant Services (IRIS), Unidad Latina en Acción (ULA) and Junta for Progressive Action. While the formal kickoff of the exhibition is on June 8,  Standart and project manager Lucy McClure said they wanted to get the installation up before graduation ceremonies across the city this weekend. 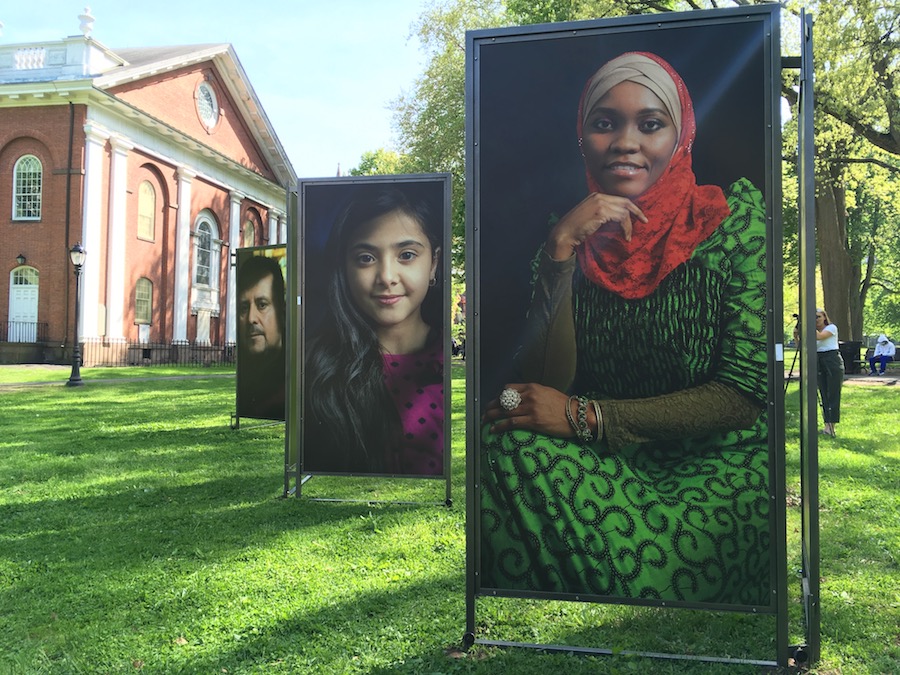 “I’m really excited,” said Standart, a map and clipboard in one hand as he moved from one sun-soaked patch to another across the green’s longest diagonal. “Really excited. It’s a whole new way of hanging a show.”

It’s a type of installation that he’s never done before—his first “Portraits of America” project in New London featured images on the sides of buildings, which requires different equipment. Printed on aluminum to protect from the elements, these portraits are loaded into 9 x 25 foot frames and then reinforced by a foundation that’s been drilled into the soil, with steel augurs driven 18 inches into the ground.

When finished, the installation will stretch from one end of the green to the other. Partner portraits hang on a banner at City Hall, and on the iconic Pirelli Building.

There is still no protocol in place for vandalism. In response to those concerns, Standart said that “I’ve never had anything graffitied so far … we just have to cross our fingers crossed that people don’t do anything.”

Watching the action unfold, New Havener Cornelius Green said he’d taken a moment to warm to the project. He’d been sitting on a bench with some friends when the install team drove in with a U-Haul truck around 2 p.m. Monday. He’d watched as forklifts arrived elsewhere on the green, and two long posters unfurled from the side of Trinity Church, then from United Church down the block. After half an hour, he approached McClure to ask about the project’s mission.

“I’ve been here for about 56 years and I’ve seen all sorts of events on the green,” he said. “When they had the tent city over there, I saw it. Or a few years ago, when George Bush came through. But I didn’t know anything about this.” 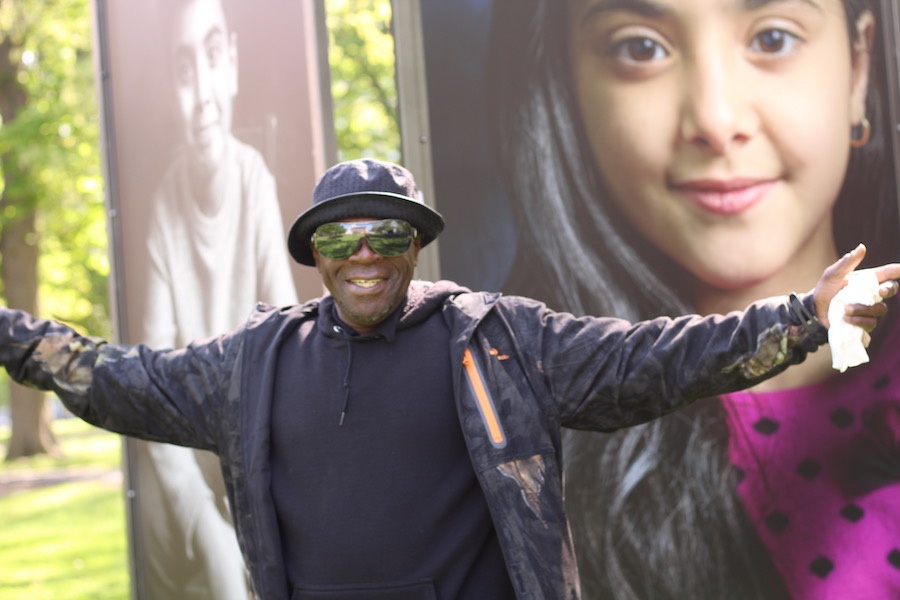 “I have no problem with it," said longtime New Havener Cornelius Green. "The Bible said God showed no favoritism to no man. Who does the world belong to? God. People are fighters, and we’re going to stand up and fight for what’s right.”

Green said he’s pro-immigration—that “people coming in, and all the languages changing” is part of living in a multicultural city like New Haven. But for him, the conversation gets more complicated when he hears about immigrants getting local employment, and then struggles to find a job. Having lived and worked in New Haven, West Haven, and Hamden, he said he thinks job preference should go to long-time locals, not newcomers to the U.S.

“They need to learn English,” he said. “Don’t let it put my bread and butter on the line.”

The art installation, he said, is less complicated—he likes having art on the green, because it makes it a nicer place to hang out. After talking to McClure, he said he also finds himself onboard with “WE ARE.”

“It’s a good thing!” he said. “I have no problem with it. The Bible said God showed no favoritism to no man. Who does the world belong to? God. People are fighters, and we’re going to stand up and fight for what’s right.” 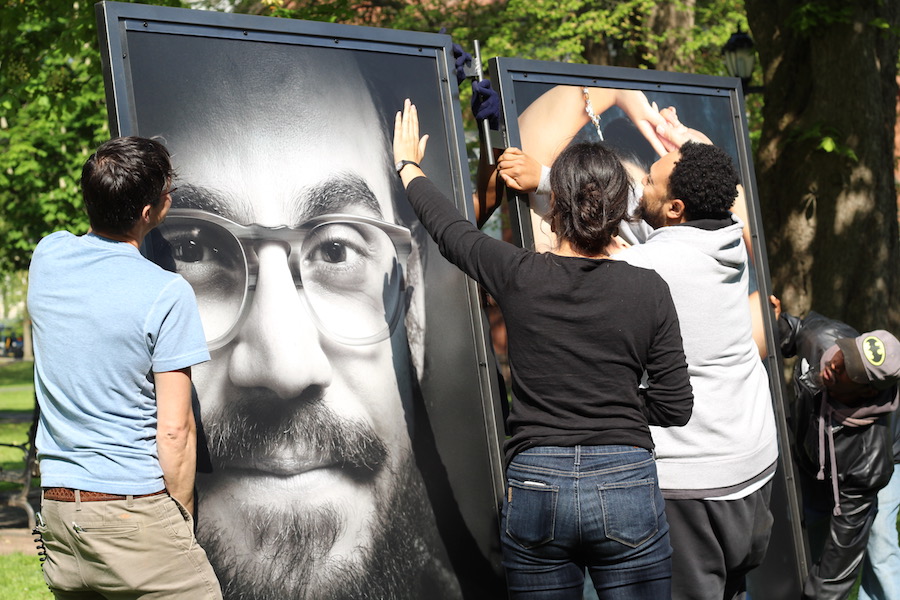 In a clearing just meters away, McClure watched as team members unloaded another suite of photographs from the truck.  As Alex Zinovenko, Jason Dockery, Guido Capuano and Mekiel Scott lifted the images onto their foundation, New Havener Sekou Kouyaté looked on from the nearby path.

An immigrant from Guinea, Kouyaté arrived in New Haven four years ago. Because he’s currently unemployed, he said he finds himself spending a lot of time on the green, or passing through the area on his bike.

“It’s kind of cool, this project,” he said, adding that he wishes he’d known about it earlier, when Standart was still photographing. “I think it’s a good thing.”

To listen to an episode of the WNHH Community Radio’s program “Kica’s Corner” with Joe Standart, click on or download the audio above.