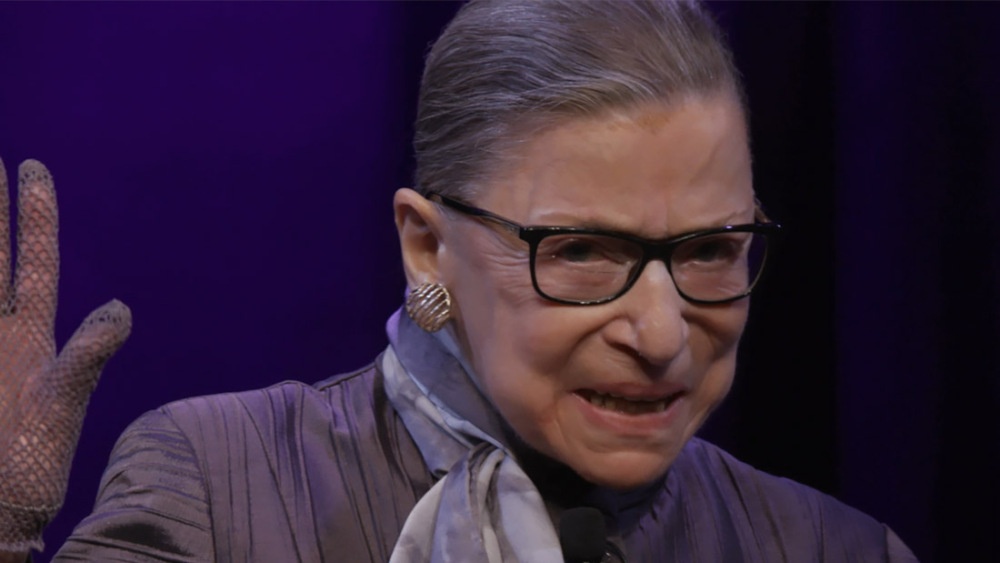 Ruth Bader Ginsburg is an icon of American history and pop culture, and deservedly so. The petite, octogenarian, opera-loving Supreme Court justice has that rare combination of towering professional success and unwavering moral clarity and humbling amiability and withering intelligence that leave onlookers not just impressed, but smitten. Try looking away from those oversized spectacles and that ornate, majestic collar. She is a philosopher queen.

For better and for worse, RBG, a new documentary about Ginsburg from directors Julie Cohen and Betsy West, knows all too well that it is dealing with a magnificent, larger-than-life creature. Which is a bit of a shame. Because the accomplished biography and delightful details that the movie unearths about Ginsburg’s life and career are more than enough to entertain and enlighten. Why stumble into hagiography when the person herself is already so great?

This is a woman who saw a need (i.e. to convince lawmakers and judges that legal sex discrimination exists and that it always hurts women more than it hurts men) and who set out to meet that need. She was and is the perfect fit, and there is something so satisfying and inspiring about watching her do that work.

In conventional biopic fashion, the movie starts at the beginning and ends at the end. Ginsburg was born in Brooklyn to Russian immigrants during the Great Depression. Archival photographs and talking head interviews, including archival footage of Ginsburg’s 1993 Supreme Court confirmation hearings that serves as a sort of voiceover narration for the justice’s pre-court life, offers a high-level overview of a quiet, beautiful, whipsmart young woman who wanted to become a lawyer when virtually no women were allowed in the profession.

Present-day Ginsburg offers a memory of advice from her mother, advice that serves as the throughline for the justice’s life: always be a lady (translated: don’t let anger get the best of you) and always be independent (translated: never find yourself entirely dependent on a man.)

This balance is on best display during the movie’s middle third, which is its most successful, when we get to see Ginsburg as a young academic, lawyer, and appeals court justice carving her way through a misogynistic legal system in the 1960s, 70s, and 80s, when women’s liberation truly was the next civil rights revolution.

Cohen and West interweave audio excerpts from landmark cases that Ginsburg argued before the Supreme Court, such as Frontiero v. Richardson (1973), in which she successfully argued that the U.S. military could not discriminate by sex in its distribution of spousal benefits, with interviews with the plaintiffs themselves with reflections by Ginsburg, her friends, and contemporary legal scholars on just how exceptional it was to have a small, quiet, forceful woman rendering these older male justices mute with her articulation of the rampant sexism baked into America’s legal system. The Supreme Court had never seen or heard anything like Ginsburg before, the legal voice of a generation of women who exposed sexist discrimination as not just an inconvenience, but a violation of the equal protection clause of the Constitution.

As counterpoint to every pathbreaking legal accomplishment is Ginsburg’s domestic stability and comfort, epitomized by her husband Marty, a prematurely balding tax attorney with a gregarious streak, a charming smile, and a self-deprecating dedication to his wife. The movie makes clear that Ginsburg would not have been able to achieve as much as she did, as happily as she did, without Marty, a buoyant booster and best friend who was always cracking jokes and always campaigning for his wife’s professional advancement, particularly as she was too soft-spoken to do the campaign work herself.

The movie never spends more than 5 or 6 minutes on any given court case, on any given individual accomplishment, but the supportive leitmotif of Marty in Ginsburg’s life offers a stabilizing foundation for understanding just how well-adjusted, just how comfortable Ginsburg seems to be in her own skin.

But RBG is not content with the mere life and personality and accomplishments of this peculiar justice. It is also interested in her mythology, in the transmogrification of a women’s rights hero into a cartoonified superhero. The movie isn’t entirely to blame, nor is this pop cultural apotheosis inherently a bad thing. It’s just a little strange, and sometimes a little frustrating.

The latter third of the movie sees Ginsburg evolve into the fabled RBG: the opera lover who actually guest stars in operas; the chastened Trump critic who fell asleep during one of Obama’s state of the union addresses. This section reveals some delightful details, like a look into her judicial wardrobe which shows a different decorative collar for basically every day of the week. Some of these details are inspiring, like her unlikely apolitical friendship with arch-conservative justice Antonin Scalia; some are hilarious, like Kate McKinnon's boisterous imitation of Ginsburg on Saturday Night Life; some are disconcerting, like a young female law student who eagerly announces that she has just purchased a whole lot of RBG merch.

All, unfortunately, are cursory, which seems to be the bane of hagiography. Not only does the person morph into the icon, but the look at the icon becomes fleeting.

As Ginsburg herself watches McKinnon bounce and rollick across the stage, she can’t help but smile and laugh, eagerly taking in the mythological version of herself. But when asked if she sees any of herself in the SNL parody, she admits that she doesn’t see a drop. Alas, by the time of RBG's apotheosis, it’s tough to see the person beneath the icon as well.