“Yoga In Our City” Flows Into Session 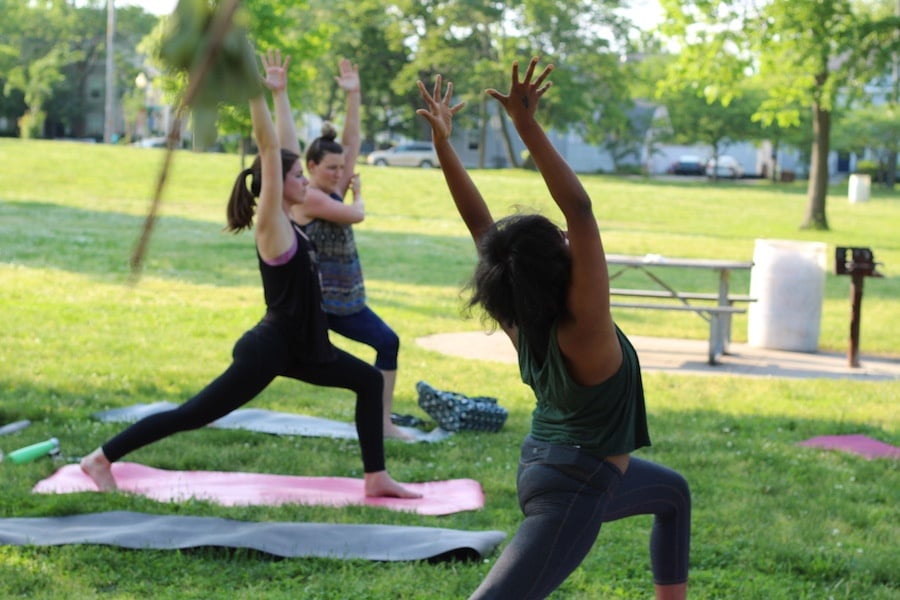 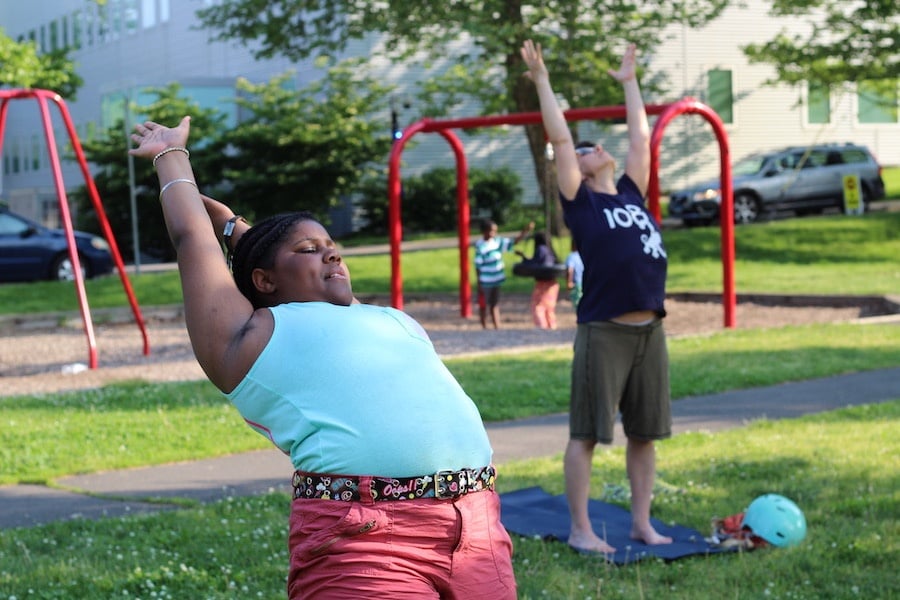 Stephannie Salters was one of the first to experience this year's new "Yoga In Our Cities" Initiative, a collaboration between 108 Monkeys and Breathing Room Yoga Center. In the background is 108 Monkeys Founder Peg Oliveira. Lucy Gellman Photos.

Nine-year-old Stephannie Salters didn’t have plans to stretch, bend, or curl up in the grass when she rolled into Scantlebury Park Tuesday afternoon. But an hour later, she was perfecting her first-ever downward-facing dog and cobra, feet sharing space with clover and overgrown summer grasses.

Tuesday afternoon, Salters was one of 10 to attend New Haven’s first “Yoga In Our City,” a new collaboration between 108 Monkeys and Breathing Room Yoga Center that offers free yoga at Ella B. Scantlebury Park each Tuesday at 5:30 p.m. On Thursdays at the same time, it migrates to Quinnipiac River Park, and Sundays it sets up in Edgewood Park at 11:30 a.m. After beginning May 29, the program runs through Sept. 2

Yoga In Our City is sponsored by Connecticare, AARP, Trinity Health, Civic Mind, CitySeed and the Connecticut Recreation and Parks Association. There are also chapters in Hartford, Bridgeport, and Waterbury that have existed for multiple years. It's designed for seasoned yogis, beginners, and the yoga-wary alike—and for people like Salters, who arrived at the park to play after school, and then wandered over to the class to see what was going on.

Michelle Morgan: “It’s not about doing the same pose that the person next to you is doing. You do you.” Her son Jack, pictured in the background, welcomed attendees as they trickled into the park.

“Our goal is to break down some of the barriers that exist,” said 108 Monkeys Founder and self-described “Street Bhodi” Peg Oliveira. ”There’s income inaccessibility, and getting to a studio—but we understand that the issue is bigger than that.”

There’s also a linguistic barrier, Oliveira said. Many of New Haven’s yoga classes unfold in a mix of English and Sanskrit, with complicated names and pretzel-like positions that can intimidate beginners. When Oliveira and her team bring yoga into public spaces, “We’re saying put your feet here and do this.”

“We want to remind people that they have a body and that they get to make choices with that body,” she  added.

On the grass, Salters worked to fold those words into her budding practice, stepping up to a black yoga mat in shorts and a tank top. As she came to the front of the mat, toes almost touching the grass, she fixed her eyes on teacher Michelle Morgan. Morgan surveyed the group, arranged in a semi-circle on their mats, and pressed her hands together in front of her sternum.

Other attendees included graduate students, young professionals, and new New Haveners hoping to get to know the area a little better.

Maybe in a different universe, she would have described this as the Anahata Chakra, heart center. Here, it was just a chance to begin a slow, sun-soaked afternoon yoga flow.

“Our whole reason for being is to bring yoga where you are,” she said to the group, pedaling her feet before going into the first round of stretches and rag-doll arm hangs. “It’s not about doing the same pose that the person next to you is doing. You do you.”

On her mat, Salters was all in. She bent at the waist, her arms clasped and hanging over polished toes as she rocked back and forth, then reached up again toward the sun. She greeted everything around her—storm clouds, sun, birds, the thick, honeyed smell of clover—with her fingertips facing the high-ceilinged sky.

She worked through her first plank, lowering into the snake-like cobra with her toes pointed carefully back, and up into a downward-facing dog. Around her, attendees moved through the movements at slightly different speeds, deep breaths and dank sweat smells wafting over the space. 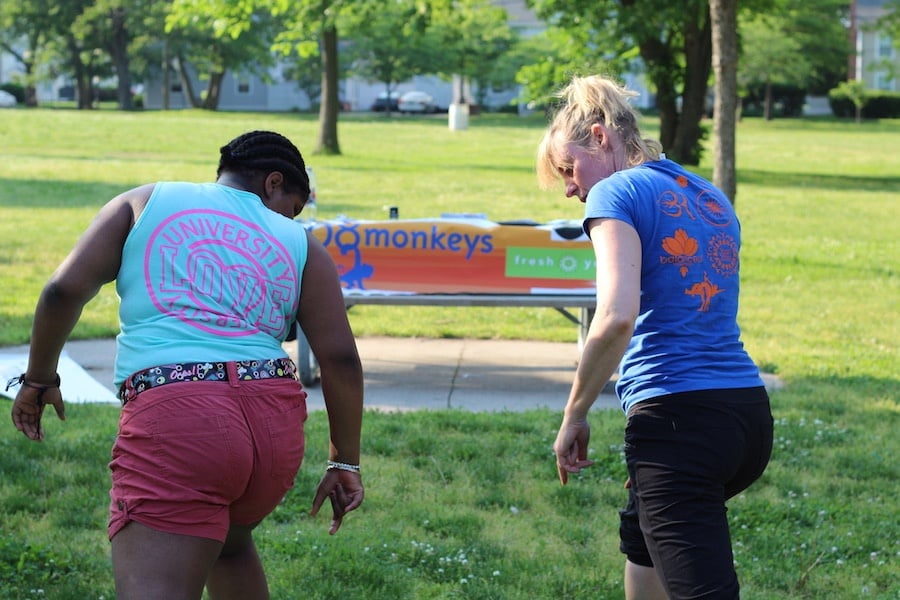 At a picnic table nearby, Salters’ grandmother Deborah looked on, eyes wide as her granddaughter moved through the poses for the first, second, then third time. Unable to do yoga because of chronic knee pain, she said that she was thrilled to have found the class, and would be returning with Stephannie in tow several times before September.

Back in the grass, Stephannie had already vowed to do the same. As she entered her first Warrior I—legs out in a high lunge, arms stretched on either side, eyes fixed on the horizon—Morgan came over to help her readjust, striking the pose in the dirt and grass beside her. As she mimed the movements to get in and out of the pose, she nodded enthusiastically. 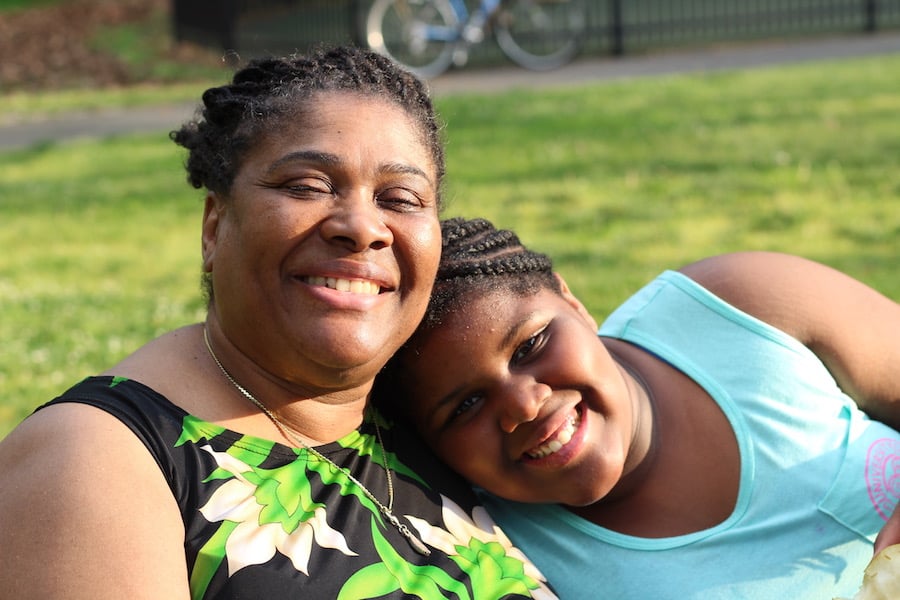 And Salters did. As some attendees (including this reporter) took a break to sweat it out in child’s pose, Salters worked on her balances, downward-facing dogs, exuberant sun salutations and graceful trees. She pinpointed a favorite new position—cobra—and worked to hone it, pressing up with her core instead of her back. As she did, she said she noticed things about the park that she hadn’t before—the sun, sky, fast-gathering gray clouds, flowers and small bugs populating the park.

“I think it was a great accident” she said of stumbling upon the class after it was over. She took a big bite into a white pear and filled her grandmother in on the lesson’s latest yoga news. “It’s cool—I’m meeting new people. I’m probably coming back.”

Yoga In Our Cities is offered from May 29 to Sept. 2 in New Haven, Bridgeport, Waterbury, and Hartford. A full schedule of statewide classes and activities is available here.