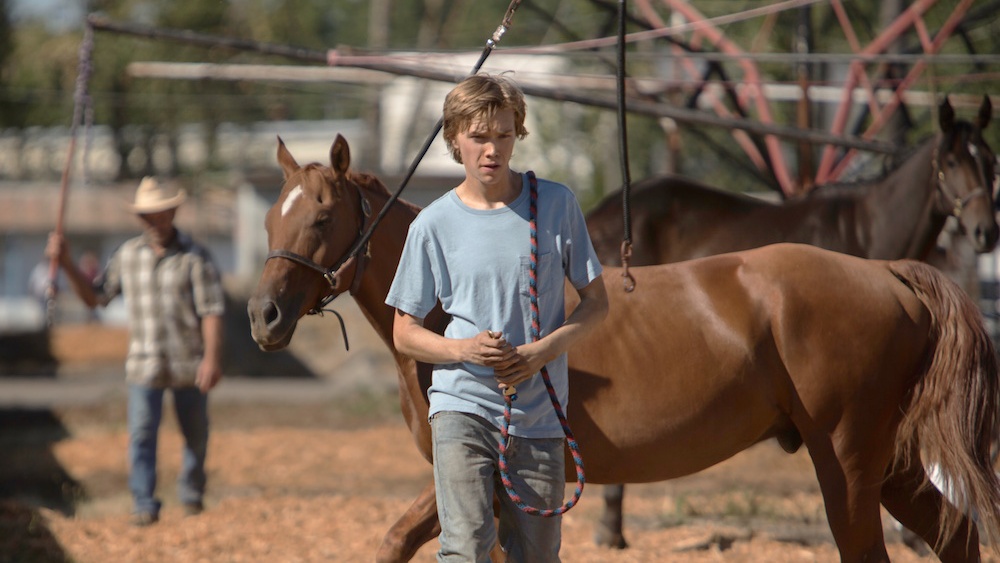 It’s rare to find a movie that truly aches with solitude, that looks with candor at how precarious and unforgiving life can be.

It’s even more rare to find those attributes in a movie about a 15-year-old boy and a horse, wandering the Pacific Northwest in search of a life more stable.

But such is Lean on Pete, Andrew Haigh’s new disarmingly unromantic coming-of-age movie about a lonely Portland teenager and a third-rate racehorse who embark on a thousand-mile odyssey from Oregon to Wyoming in search of the boy’s estranged aunt.

Charlie Plummer plays Charley Thompson, a scrawny, mild-mannered, resilient high schooler who runs the rural roads of outer Portland every morning to escape the inertia of life with his dad Ray, played by Travis Fimmel.

Ray clearly loves Charley, but is simply unwilling or unable to be a responsible a parent to him. The kitchen cupboards are empty nearly every morning; Charley spends most afternoons alone at home, slurping cereal in front of a portable television. When the two do share a rare moment alone together, Ray tries to impress Charley by telling him about his latest affair with a colleague, by offering the time-worn advice that waitresses make the best girlfriends.

Ray and Charley’s relationship is central to the movie, even after a sudden turn finds Charley spending more and more time with a sour but accommodating racehorse owner named Del (Steve Buscemi) and his overworked team of horses.

Charley’s chief inheritance from Ray, whose rakish charm and simmering sense of inadequacy contrast sharply with his son’s quiet durability, is an absolute faith in and commitment to one’s independence. Ray knows that the life he has crafted for him and Charley is inadequate and unstable, but it is their own.

After Charley finds himself leaving Oregon with one of Del’s older horses, named Lean on Pete (or Pete for short), Charley commits himself to the same determined self-sufficiency as his father: no matter how difficult his situation, no matter how much he suffers or how much he needs the help of someone else, Charley would rather take his pains in silent anonymity then draw attention to himself as someone who cannot carry his own weight in this world.

Lean on Pete time and time again tests the bounds of Charley’s solitary endurance and the wisdom of his decision to strike out on his own, with no one but Pete to walk beside him.

Haigh, who’s previously directorial credits include the stellar but similarly heart-weary dramas Weekend and 45 Years, is not a flashy filmmaker, and yet every frame of Lean on Pete seems to be filled with a kind of sneaky, subtle grandeur.

The few horse races in the movie transpire in a blink, and yet to Charley, they are feats of wonder, not a fantastical escape from the humdrum of his life but rather an opportunity to be proud of and inspired by creatures that always, indomitably, propel themselves forward.

True to the movie’s defiant realism and resistance to romanticizing Charley’s relationship with Pete, the movie’s most evocative camerawork comes during the race sequences, but does not focus on the horses themselves. Instead, the camera quickly gliding through the crowd or rushing past the starting line to watch the horses kick dust into the air always trains its eye on Charley: this is his movie, his journey, his persistence and despair and decision to continue on in his journey east to find his aunt.

In situating the movie in the arid scrubland and distant mountains of Oregon, Idaho and Wyoming, Haigh taps into an inevitable contract between the smallness of any one person and the inescapable vastness of the environment that person inhabits that Kelly Reichardt has explored in every one of her Northwest movies, from Wendy and Lucie to Night Moves to Meek’s Cutoff.

This varied and domineering and beatific landscape is a perfect analog to the world that Charley is committed to surviving in: a world that is beautiful and traumatic, a world that is unforgiving but that allows for one to live on one’s own.

Lean on Pete may look at first glance like a heartwarming story about a boy and a horse. But Haigh is not interested in solace through friendship; he’s interested in the physical and emotional bruises we endure in our quest to become totally independent, self-sufficient beings. There is little nobility in this quest, the movie seems to suggest, and even less reward a life lived entirely alone. Solitude may be an inevitable part of the human experience, but companionship and trust, vulnerability and selflessness, are key too in crafting a life that will last longer than adolescence.