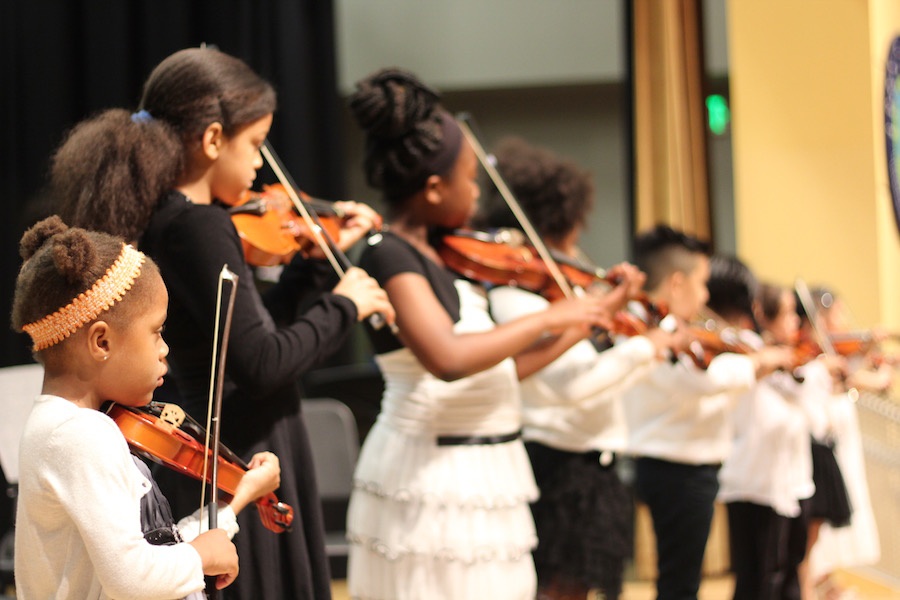 Six Music Haven students won’t be returning to their string instruments, practice stands, and studio lessons in Erector Square next year—and for the first time in its existence, the organization is okay with that. Thrilled, in fact.

Members of the "Discovery Orchestra" take the stage for the first time. Lucy Gellman Photos.

They took advantage of it, a parade of pint-sized players queuing up on the side of the auditorium, and taking the stage with tidy bows and saucer-sized eyes to the audience. Cradling their new violins, members of Patrick Doane’s “Discovery Orchestra” brought on the first applause of the night, launching into a variation on “Twinkle Twinkle Little Star” that caught audiences with a fake-out ending, then gave one more minute of twinkly strings. 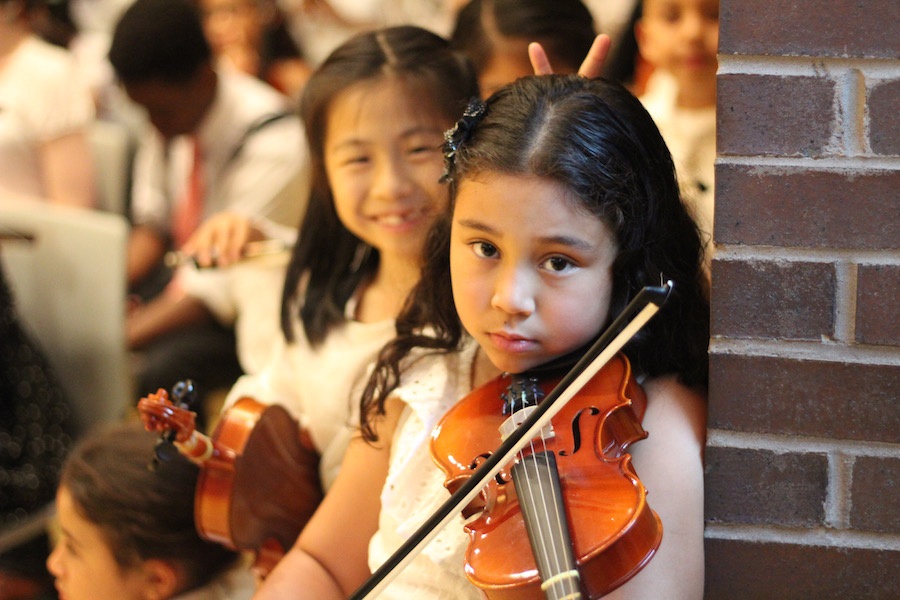 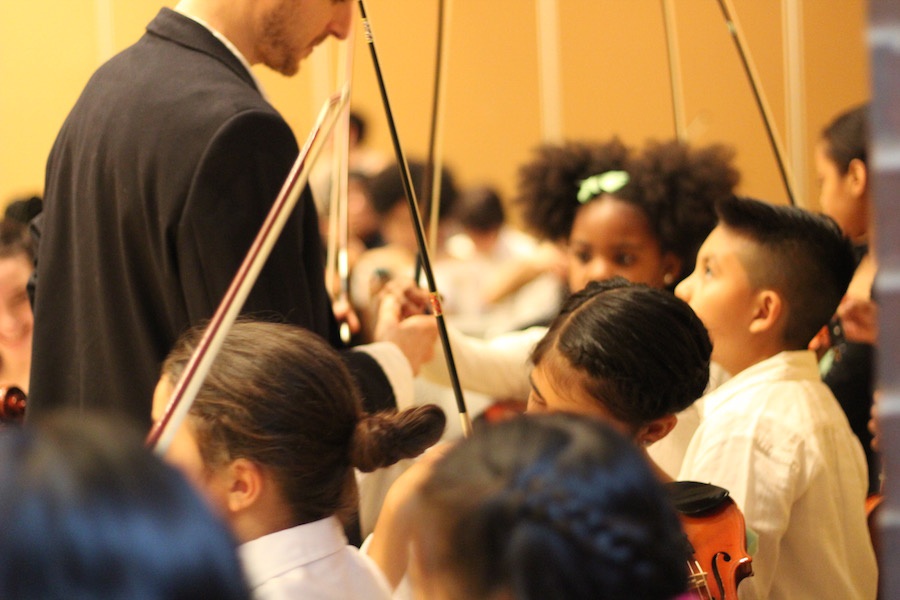 They welcomed their peers from the organization’s ongoing “Music Bridge” program, which teaches music to refugee students. A barrage of strings followed: a mostly smooth rendition of “Sadly/Row/Lightly Row” from a “Mostly Viola Studio,” a thrilling mashup of classical music and the slick Batman theme, a rousing cello rendition of Ben King’s “Stand By Me.”

But the graduating seniors, and their soon-to-follow peers, stole the show. Joined by teachers Gregory Tompkins and Annalisa Boerner, Oakley and Galvan launched into Arcangelo Corelli’s  “Largo a la Festiva,” a winding piece in which violin and viola talk past each other, and then figure out how to reconcile.

With the group’s “Muse Quartet” (Audrey Rivetta, Sofia Galvan, Isabel Melchinger, Tompkins filling in for Noel Mitchell), Galvan returned to the stage for Beethoven’s “Op. 59, No. 1, Movement 1,” a sort of dizzying dance as strings orbit each other excitedly. 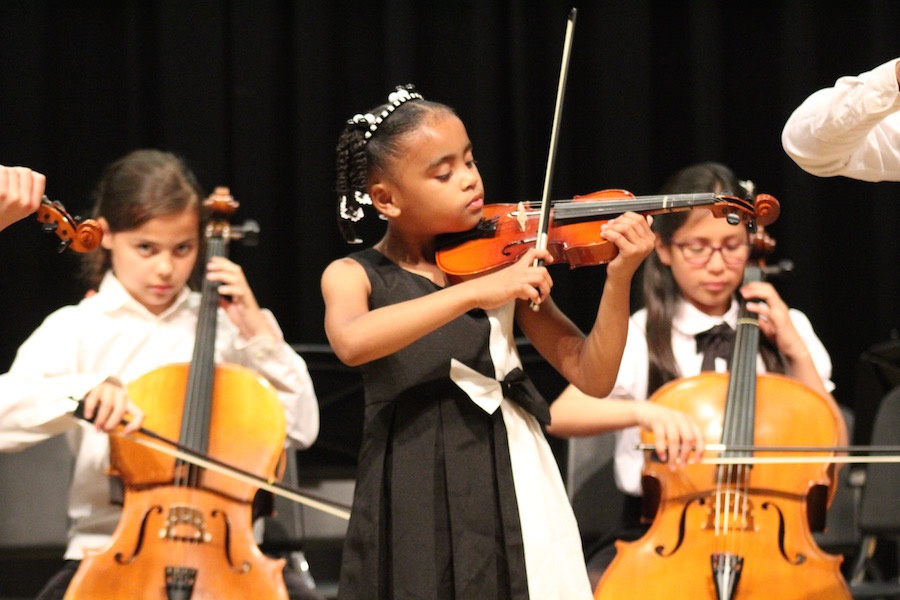 So too with the aptly-named CJZJ Quartet (Cristofer Zunun, Justin Zlabys, Jordan Brown; Z’Kiiya Crawford), a group of middle and high schoolers who took on Hayden’s “Op. 33, No. 3, Movement I,” and showed that Music Haven is in strong and nimble hands as the seniors pass the baton. Already, several of the organization’s earliest students have become teaching apprentices, with students like Melchinger taking on tiny cello pupils of her own.

It was enough for Galvan, Oakley, Moore, Harris, and Salahuddin to look a little teary-eyed when they took the stage one last time, to perform “Dona Nobis Pacem” with all of the organization’s  80-some students. As sections joined in one by one, the room filled with sound, parents leaning in with their phones and cameras to record.

For many of the seniors, the performance marks coming full circle in more ways than one. Headed to UConn for degree in art education, Galvan began her time with Music Haven 12 years ago, when the organization was a budding after-school program operating out of John C. Daniels and Wexler Grant elementary schools (it was formally incorporated as a nonprofit in 2006). 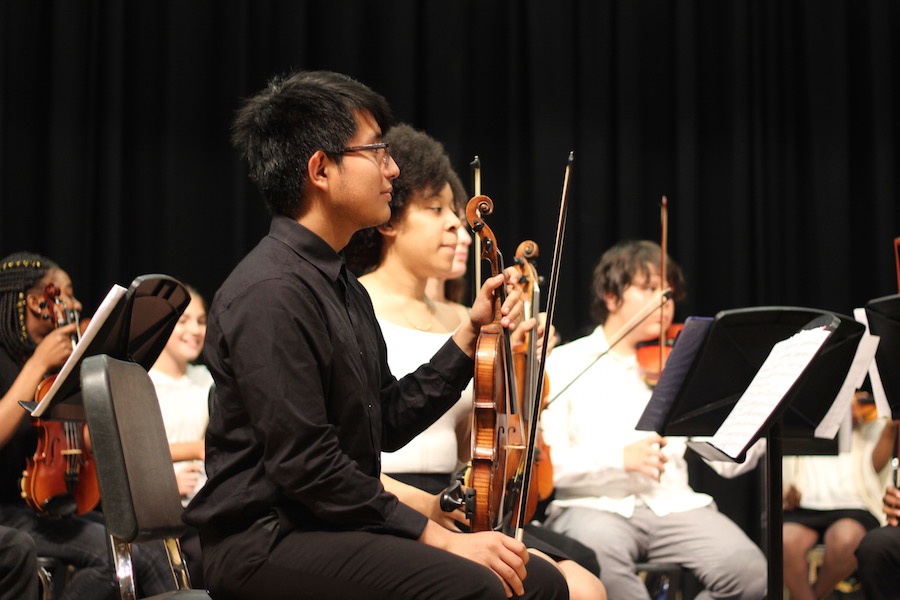 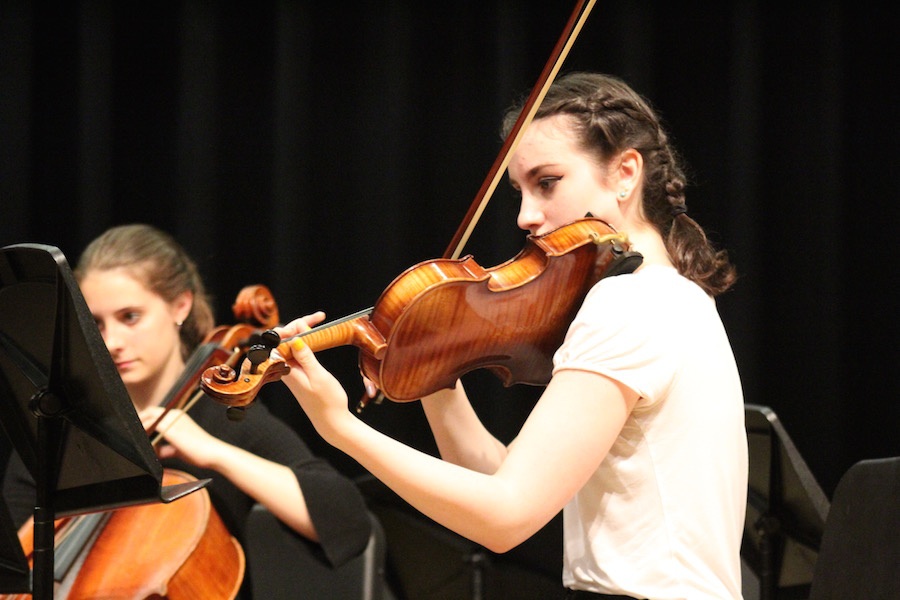 Long before the group’s Whalley Avenue and Erector Square locations, Galvan recalled practicing at Daniels, trying to figure out what a string instrument was and how to make it sound right. She watched as two cycles of teachers came and went, and the organization changed leadership, then moved  from a former auto-garage on Whalley to Fair Haven.

“Music Haven helped me figure out what I want to do,” she said, biting into a chip-studded cookie after the performance “I don’t want to be a music teacher, but I want to be an art teacher because … well, when I teach some of my practice students and they get through a song, I’m like ‘Wow! I helped with that.’ I think it would be even better if I was an adult doing that. I think it would be fun for me.”

“It goes by really fast,” she added. “I think that music is going to be pushed back a bit, but I want to keep music in my life. Spending 12 years of my life doing something is, like, the greatest thing ever. Music has really opened a lot of opportunities and doors—and if I keep it in my future, it’s going to be something that I can enjoy. I feel like it can just get better from here.” 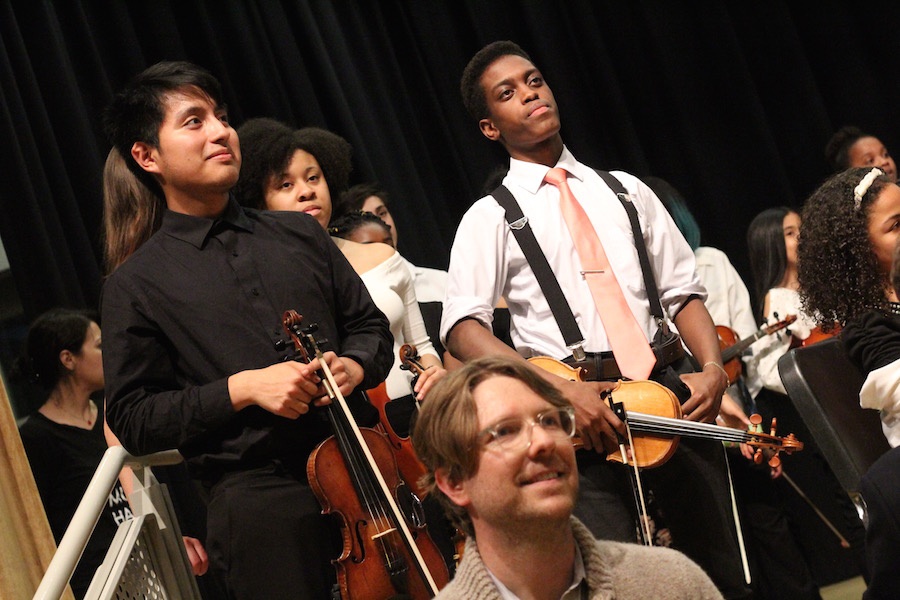 Damani Salahuddin (pictured second in to the right, with Cris Zunun): “There are times that I’ve wanted to quit. But I kind of stuck to my guns and stuck with this over the time. It’s made my skills more broad." Lucy Gellman Photos.

Salahuddin also began early in the organization’s life, in 2008. A saxophone player who picked up violin, he said that the organization has instilled in him a dedication to music he wasn’t expecting, and plans to continue building at the Berklee College of Music.

“There are times that I’ve wanted to quit,” he said. “But I kind of stuck to my guns and stuck with this over the time. It’s made my skills more broad—I play primarily jazz, but through this, I’ve learned a lot about classical, and different genres and styles.”

Joking with Zunun and Oakley, 10-year Music Haven violin veteran Moore said she is also going to miss the organization—but is excited for what’s ahead at Central Connecticut State. As a kid, Moore took lessons at Wexler Grant on Wednesdays and Fridays, watching as the organization expanded, and then expanded again. 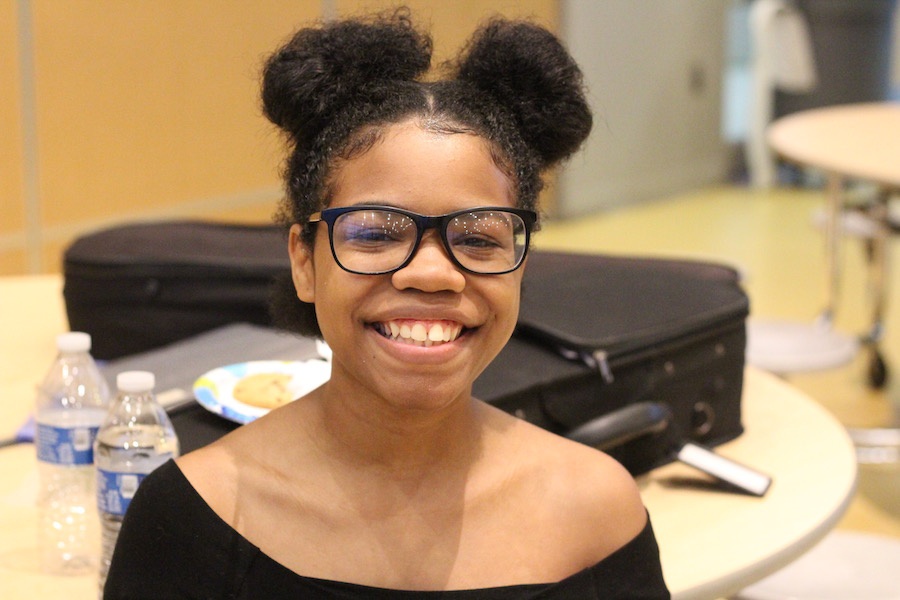 While she’s now headed straight for a technical theater major, she said she hopes to continue both playing, and using the patience she’s learned to excel in the school’s choir and her academic classes alike.

“I hope I continue to do music!” she said. “It went by really fast. It takes me forever to do things, and I don’t always have the patience to try and succeed. But there was a lot of inspiration and a lot of encouragement that went along with the process of learning.”