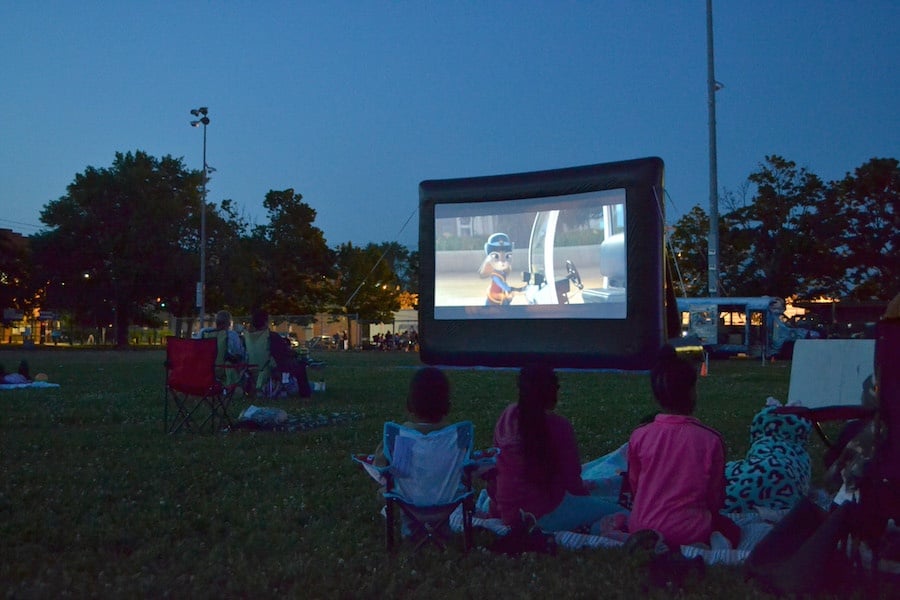 Criscuolo Park was bustling about an hour before sunset. One of the city’s iconic Fun Buses was parked in a field not far from a busy playground and full basketball court. Kids rolled past chattering on scooters and bikes, and staffers from New Haven’s Department of Parks, Recreation & Trees worked to transform the riverside park into a makeshift open-air movie theater.

Friday marked the first installation of the city’s Friday Flicks film series, back for a fourth year. For the next 10 weeks, the city will host a free, family-friendly film screening in a different New Haven park each Friday evening, from Edgewood to East Shore. Upcoming titles include Despicable Me 3, Hidden Figures and Up. Friday, the series opened with  Byron Howard and Rich Moore’s Zootopia.

Kenyena Amiker and Rodney Wilkerson were the first to set up a picnic in a prime viewing location. With a blanket, pizza, and two young children, the couple came out from their home in Westville to start their weekend off right.

“It’s a nice event to come to with the family on a summer night,” Amiker said, as her one-year-old Yariah’s eyes widened while watching a giant screen grow skyward from folds of plastic.

Once fully inflated, the screen stood taller than the playground itself, and instantly drew the attention of children from across the field.

“It brings the community out—and kids,” Amiker added, as her daughter greeted a young boy who’d wandered over from the playground, lured by the curious theater set up.

Nearby, Tynay King laid out a blanket with her son, daughter, and their cousins. Bubbly as he spoke, her son Chase shared that he’s five and a half, his sister is one and a half, and this wouldn’t be his first time watching Zootopia on a big screen. He first saw the film when it came out in theaters and it’s one of his favorite movie. He added that Friday did mark his first time watching it outdoors.

While passing out little blue and red bags of Doritos, King echoed the sentiments of her picnicking neighbors.

“I think it’s really good for the kids, especially in summer time,” she said, smiling as her son ran up to another group of children before she could finish passing out the snacks. “It keeps all the kids together.”

Not far behind them, another set of moviegoers settled in with picnic salads.

Clare Dignan started dropping hints for date night when she saw the Friday Flicks schedule posted on the Facebook page of the Department of Parks, Recreation & Trees. Her boyfriend Jamil Perez took the hint when he found a copy of the summer movie schedule slipped into his bag. The couple decided to bring a picnic dinner, and Dignan said she still felt invited even though she’d planted the idea.

“Being new to New Haven, I want to feel like I’m part of the city,” Dignan said. She added that coming out for the Friday Flicks event made her feel like more of a New Havener. 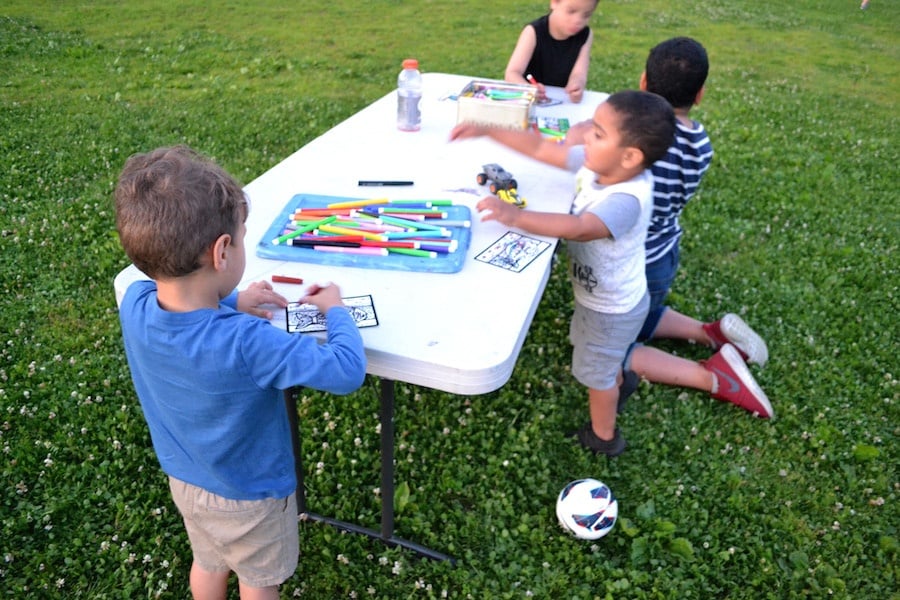 According to William Dixon, deputy director of recreation at the New Haven Department of Parks, Recreation & Trees, the department invested between $10,000 and $15,000 in the equipment several years ago.

“It gives families an opportunity to come out on Friday night and enjoy the park,” Dixon said, adding that this season’s movies were chosen by a public poll and are all family oriented.

As twilight set in, the event staff announced a 10-minute countdown to show time. A cluster of children gathered around the Fun Bus craft table scrambled to replace marker caps and finish coloring in fuzzy velvet postcards.

Kendall Shanklin, program specialist with the Department of Parks, Recreation & Trees and an art teacher at St. Rita School in Hamden, playfully chatted with kids he recognized from other stops on his summer Fun Bus route.

“There’s something about having the city provide recreation to the public—it’s amazing,” Shanklin said.

He explained how the city used to screen free movies on the New Haven Green, but people weren’t always able to make it downtown. Now in its fourth year as a multi-location program, Friday Flicks gives families the opportunity to connect with their neighborhood community and enjoy their local park without worrying about travel.

“I tell teens it’s the cheapest date you’ll ever have,” Shanklin added.

Shanklin and the Fun Bus will accompany the mobile theater for each of the summer screenings, offering crafts, coloring, and other creative activities for kids, in addition to its regular summer schedule. For six weeks over the summer, the city’s two Fun Buses will make stops in different parts of New Haven, visiting two parks a day, five days a week.

“Kids need to come out and be kids,” Shanklin said, mentioning the importance of providing children with the chance to express their creativity. “I find kids who have difficulty in school I have no problem with over the summer.”

He added that there’s a lot of slime making in school these days, and they even make slime on the bus—by the bucketful.

By the time the movie started, the Q Bridge was glowing blue behind us, and more than a dozen groups had hunkered down for the show. Teens canoodled on a blanket adorned with bright yellow cartoon Minions. Kids who arrived late helped their adults spread blankets and assemble chairs. Everyone kicked off their shoes.

As Judy Hopps, the movie’s star cartoon bunny, appeared on the big screen for the first time, one little boy jumped up from his lawn chair—the same little boy who danced along to every song that played throughout the movie.

Dixon said that the Friday Flicks series is one of many free, public activities the city hosts over the summer, little things they’ve created over the years to make summers fun for families.