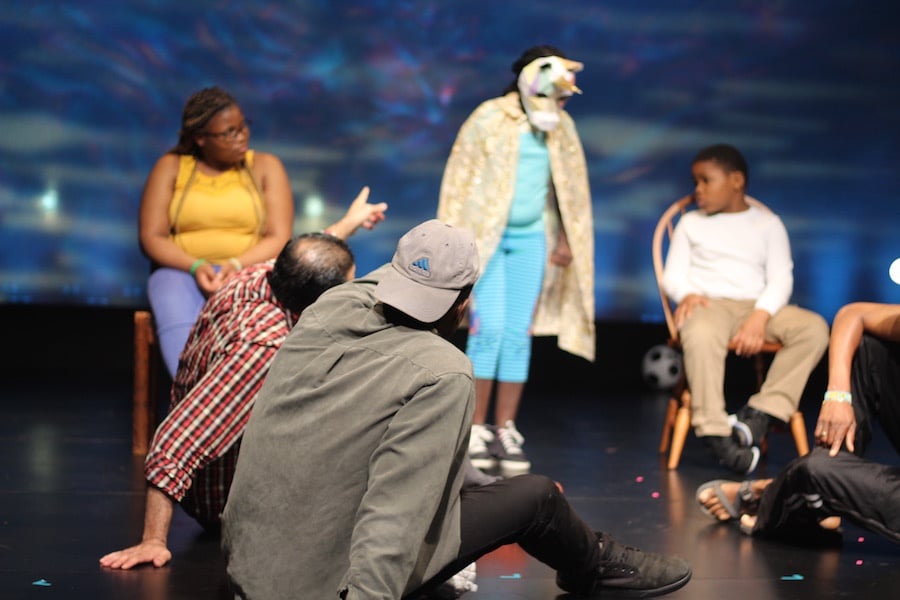 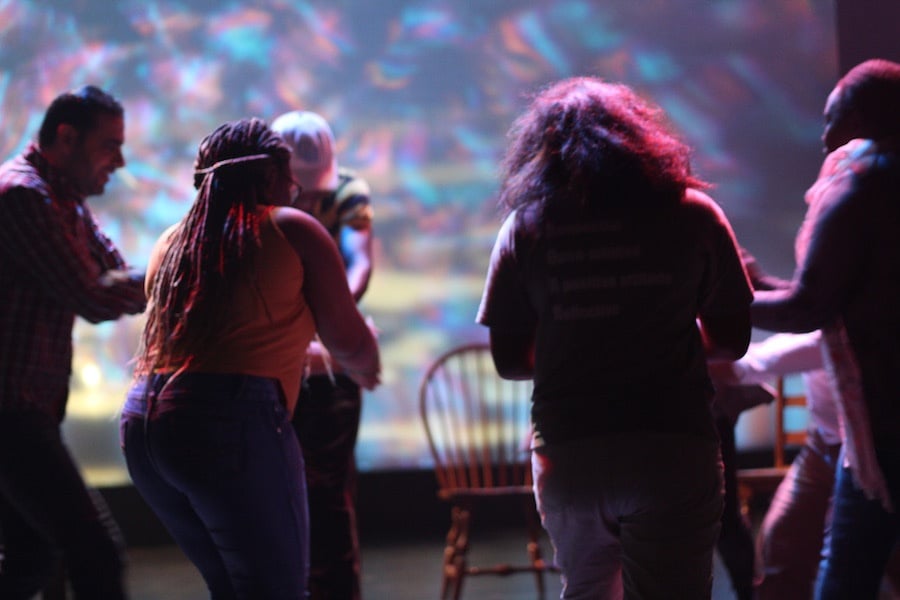 "In Africa, we dance for nothing!" Joseph Kazadi exclaimed at one point in the show, ushering in dancing to Shakira's "Waka Waka." Lucy Gellman Photos.

Eight bodies moved in almost-unison. Hips rocked gently. Hands met mid-clap. Feet lifted from the stage toes first, then went airborne. Shakira belted Tsamina mina eh eh/ Waka waka eh eh and at the center a unicorn bobbed its silver head, cape shimmering behind it. One foot hit the ground and the other bounced up.

And then, out of nowhere, an explosion rocked the space. Warm blue light to black. Bodies scattered. And the audience was left to wonder: was this the new normal?

So unfolded The American Unicorn Friday night at Long Wharf Theatre, the culmination of a years-long collaboration between Long Wharf and Integrated Refugee and Immigrant Services (IRIS) called the Newcomer Play Project. Written and created by Azhar and Lames Ahmed, Mohamad Chaghlil, Ruben Kwigwasa, Joseph Kazadi and his children Mariame, Drysile, and Joe, the show brought in over 400 audience members for its one-night-only performance. It was directed by Long Wharf Community Engagement Manager Elizabeth Nearing and Resident Community Engagement Associate Aurelia Clunie. 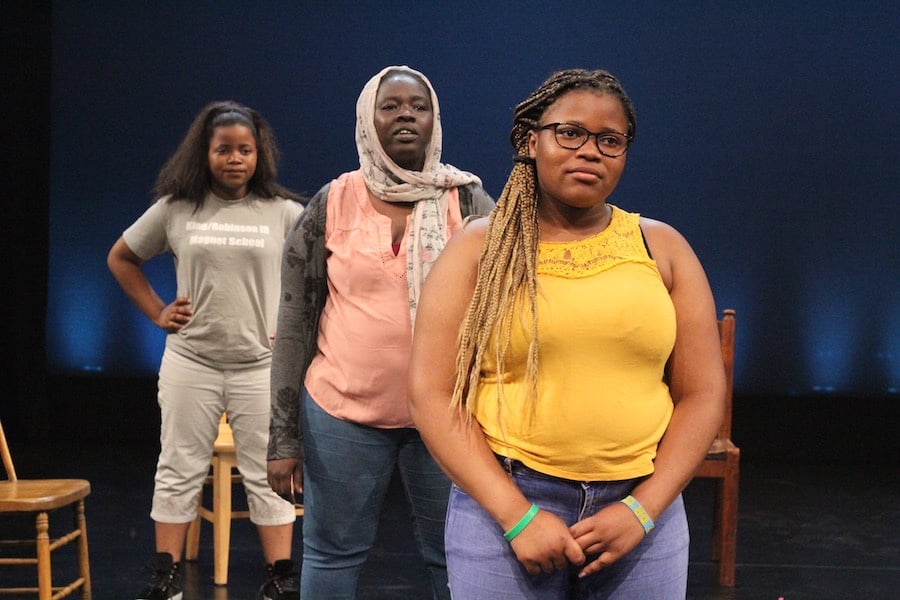 Mariame Kazadi, Azhar Ahmed, and Drysile Kazadi at the beginning of the show.

Half-storytelling and half-magic, The American Unicorn began Friday with a simple premise: our power and our shared humanity live in our stories. The eight writer-narrators behind the work are all refugees who have been resettled in New Haven: the Ahmeds from Sudan by way of Egypt; Chaghlil from Syria; Kwigwasa from Mozambique and then Congo by way of South Africa; and Kazadi and his children from the Democratic Republic of Congo. They have been in the United States for varied periods of time, from as short as a year and a half to as long as six years.

And they all have stories to tell—of migration and displacement, but also of the lives they lived in their home countries, as asylum-seekers and refugees in limbo, and as new arrivals to the United States. Stories that go, as Warsan Shire writes in her poem “Home,” into the mouth of the shark, but do not specifically start there.

These stories originate, as Lames Ahmed proclaimed in the first few moments of the show, “back home,” a place where memory collides with myth, and shapes the solid ground on which they still stand.

Behind Ahmed on stage, seven triangulated bodies turned “back home” into a rhythmic, jubilant call-and-response (“Back Home“/”Back Home!”/“In my country”/“In my country!”), nearly melodic as it opened the play. Back home—hard to pinpoint, but it seemed like the early 2000s—was a time of greater normalcy. 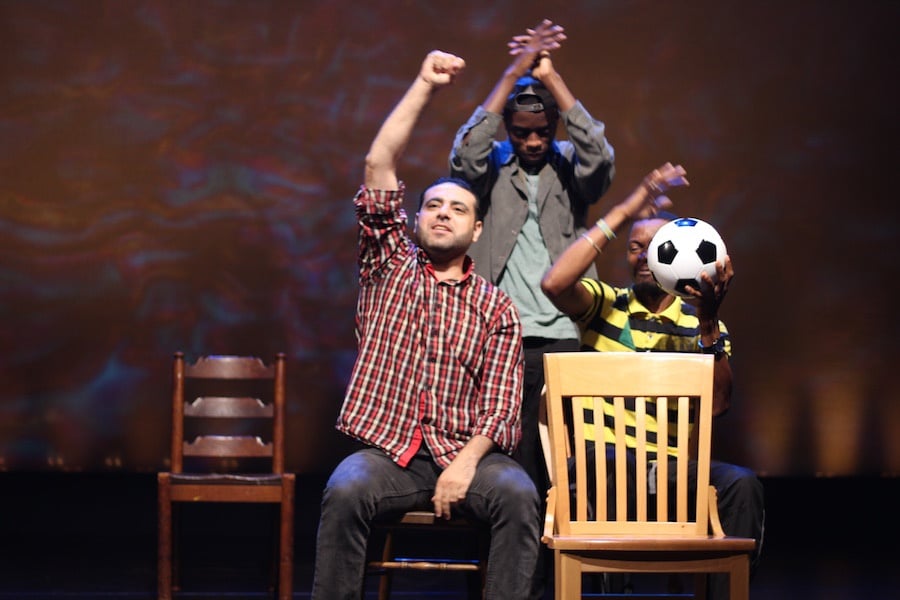 Scenes flashed across the stage. It was a time when hard decisions meant choosing between the hot beach and the cool mountain for a free afternoon with friends. A time of pickup soccer games, plastic-and-twine sports equipment, gleeful sing-alongs in Arabic, of dancing for almost no reason. A time that was not without conflict, but also not without joy.

And of unicorns, which Lames described to both Joe Kazadi and the audience as magical, horned creatures that poop rainbows, and exude “hope and love and sometimes even harmony.”

No sooner had she described unicorns to the audience than one (also Lames, in costume) began to appear in a boxy, silver face mask and gilded cape, weaving through bodies with a series of head nods and swaying arms. She staked her territory: deliberate but unhurried, sometimes noticed and sometimes not.

As Joseph Kazadi watched his father, a judge, shake a colonel’s hand, she was there. As Azhar Ahmed befriended the goose that her family owned, sparing its life time and time again, the unicorn sauntered through. As the group came together to dance jubilantly, she was front and center, cape glittering around her shoulders. As if to say, everything’s going to be just fine. As if to say: Remember that? You can have it again, I promise. 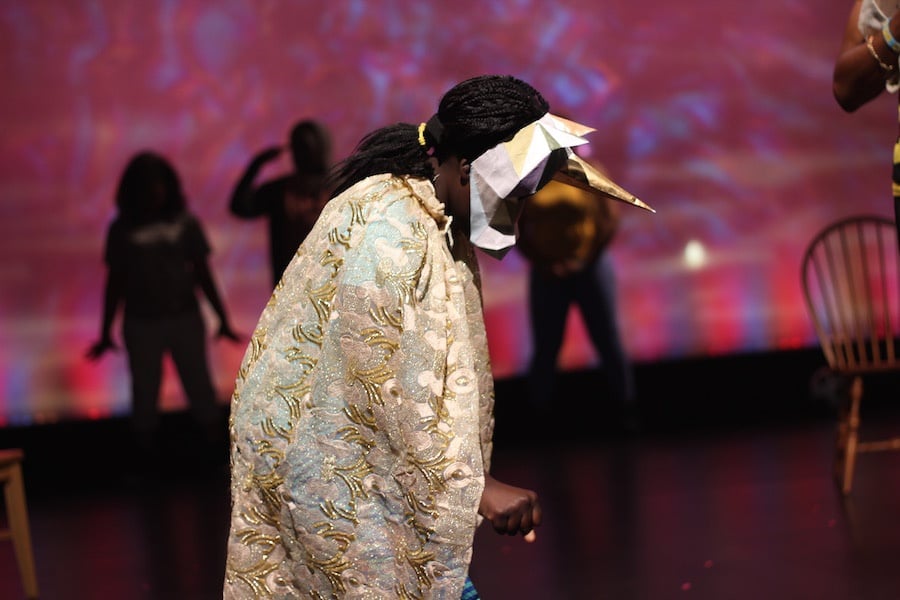 But where there are unicorns, there are also medusas—social, governmental, and human evils that rear their snake-filled heads, turning their countrymen to stone in their wake. In one vignette, Chaghlil set a harrowing scene for the audience, transforming the stage as he walked. He was not on the Long Wharf stage but in Damascus, 2011, as he listened to a rash of bombs explode around his home. The stage’s blue backdrop turned to a pulsing red.

“I hear the loudest sound since I was in the military,” he recalled, looking out at the audience and then back to the microphone he was holding. “We never expected bombs. We never had them … my city turned into a medusa.”

There were medusas everywhere. Approaching a music stand and microphone, Mariame Kazadi recalled the last time she saw her brother and uncle, as they headed off to a church service around Christmas day years ago. At first when they didn’t return, the family thought they’d been delayed. Years later, they remain unsure of what happened, and whether they should count them among the missing or the dead. 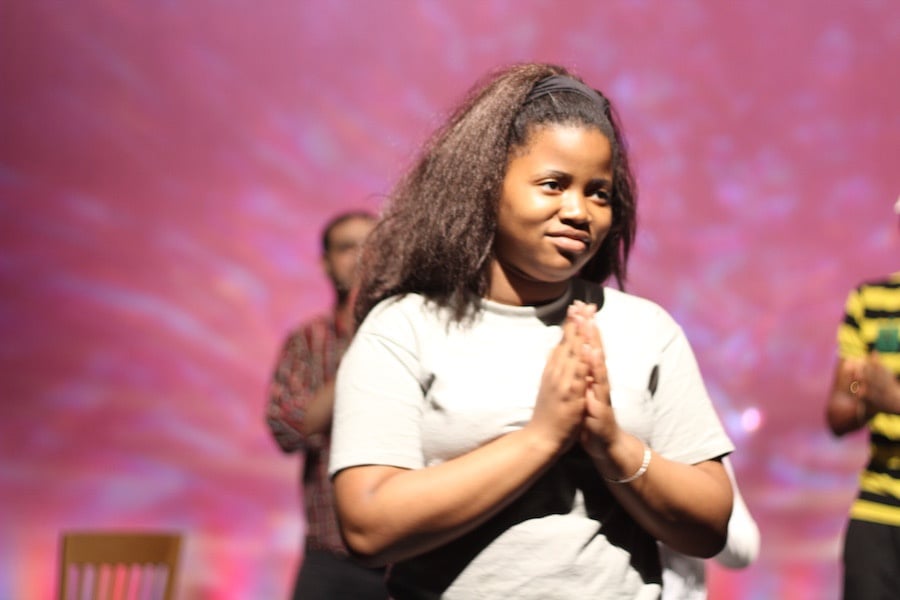 “I have waited all my life for the day for my uncle and brother to come back,” she told the audience, her voice cracking as she took a deep breath and continued. Someone at the right of the stage burst into audible sobs.

The medusas multiplied. Taking a moment before the audience, Azhar recalled watching as Egyptian security forces opened fire on protesters in Mustapha Mahmoud Park, killing a child who stood just feet from her. In South Africa, they raised their heads and threatened Kwigwasa and his family, a phone call in the middle of the night early turning them to stone.

They were there in Nairobi, Kenya, as attacks on the Westgate Mall prompted calls from officials to close refugee camps across the country. And Damascus, as insurgent fighters brought the city to its knees.  No land was immune to them—not even America, ostensible nation of unicorns.

“It’s like you can’t see. You can’t hear. You can’t vote … it’s hard to climb up again,” Chaghlil said of his first months in the U.S. He recalled his experience walking into a cell phone store in downtown New Haven, where he’d been told the employees spoke Arabic. Instead, they spoke a fast English that was jumbled to his ears.

He wasn’t alone—Kwigwasa likened America to “licking a bar of soap”—beautiful and appetizing until you realize that it’s poison, a salty white foam on your tongue. Azhar Ahmed remembered a trip to Stop & Shop that ended with the emergency alarm going off, and all of the shoppers staring at her with wide eyes and pointed fingers. Was there a medusa in the parking lot, too?

These are questions that anchored the play because we should be asking them in our own lives. Where are the medusas hiding? What will slay the medusa? How will the unicorn make its rainbow-pooping return? In one particularly stunning sequence, the cast embodied their own conflicted feelings about the country, dancing out onto the stage to Childish Gambino’s “This Is America.” 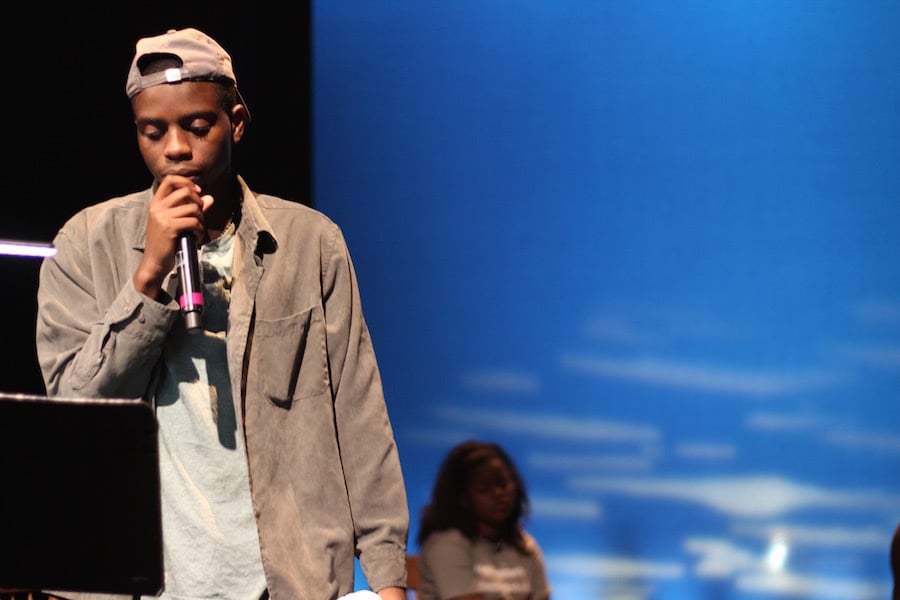 Ruben Kwigwasa, who ended on a high note with a love poem he'd written for the show.

Maybe the conclusion, cast members reasoned, is that “this country has medusas. But it has a unicorn too.” In the play and in real life, that majestic beast looks different for each cast member: a new baby born at a friend’s house, the sheer emotion of watching bodies fill the streets in support, a love poem that finally has room to take root. In a sublime blend of activism, political advocacy and theater, Joe Kazadi and Lames Ahmed brought the house down with chants of "The people/United/Will never be defeated!" and "No ban! No fear! Refugees are welcome here!"

The message resonates on a local level—it’s on the audience to walk away with a renewed sense of responsibility to New Haven’s newest citizens—but also a global one. It is a distinctly human kind of gut check: what are you doing to both fight for refugees, and make sure they are welcome in your neighborhoods and cities? Are you listening? Are you listening even more?

It’s also a lesson in kindness and experiment that is exactly the kind of play the Long Wharf should be doing as it charts its next steps forward. The members of the cast are world-builders and teachers, with lessons that extend beyond borders or bans. They remind us and each other that it is, in the words of the play, okay to be scared. That everything does not need to be alright.

That the mouth of the shark is real, and it is constantly gnashing its teeth, and it is our job to look at it straight on, and measure a muzzle.