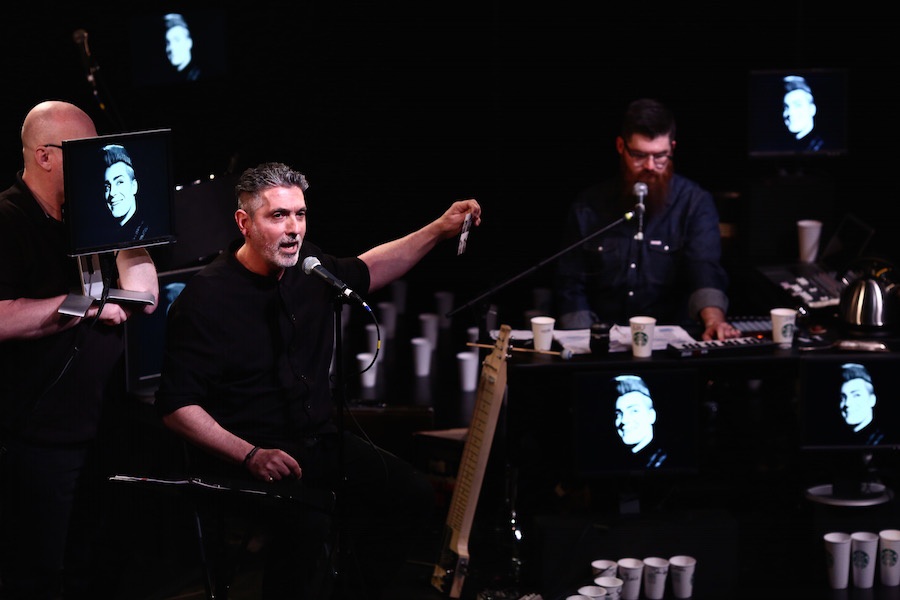 John Sex is dancing across all 13 screens. Red jacket, maybe crushed velvet. He’s too far away to tell for sure. Crown gleaming on his head. His hair, once a shellacked horn the height of someone’s stiletto, has become a polite blonde nest. He is exquisite. He is entirely himself. Nobody knows that he has two performances left before he dies of complications from AIDS.

Sex—or rather, the intimate weight of his memory—is part of Ain Gordon’s Radicals in Miniature, which opened Tuesday night at the Iseman Theatre on Chapel Street. The first ticketed event of the International Festival of Arts & Ideas, the show has one more performance Wednesday night. More information and tickets are available here.

On its surface, Radicals in Miniature is a work about who gets to call the shots on memory in the digital age. Is it Google, with its post-1991 bias and use of search engine optimization? Or real life humans, who rely on oral tradition and the visual and written records? Who care, as Gordon does, about what and who were lost as New York City gentrified, and people realized you could turn a profit on counterculture?

It’s a quick and heart-rending march to the answer. With Sō Percussion’s Josh Quillen and longtime stage manager Ed Fitzgerald, Gordon takes the stage among 13 monitors and a small, tidy ocean of Starbucks cups, his nostalgia-drenched body caught in the trappings of tech and corporate culture. Voices chatter quietly in the background, a sort of spectral loop that quiets the audience as Gordon gets things underway.

Then, we are tunneling through his memory. Onstage, he is dressed in the black-on-black of directors, stage managers, prop masters—that which absents him from the show. His mind is somewhere that disappeared decades ago. His fingers work back and forth, doing a sort of frenetic dance as he launches into the life of John Sex, his first radical.

New York, 1960s. Sex is 22. Gordon is just 16. There is a club that doesn’t exist anymore, attendees soaked in sound as they move their bodies back and forth in the low light. We feel it all: Gordon’s heart expanding and constricting inside his chest, the warmth of the space, the palpable, roaring fear that will come with the next decade, as the AIDS epidemic seizes New York City. In the audience, we wait for the next sentence with bated breath.

Gordon takes on this role—storyteller, monologist—with profound responsibility. From the outset his language is clipped and economical, whole sentences coming out as pure poetry. He throws his voice only to reel it back in, then dance along its sharp edge for a while. Beneath him, Quillen comes in with the miscellany that builds a memory: phone numbers, repeated phrases, snippets of music that crawl into the corners of one’s brain and take root there. At one point in the show, he takes over narration, a whole Ohio town unspooling from his lips.

This is the performance of remembrance as it feels it was always supposed to be. Not maudlin or too sweet, but full of heart, each radical in miniature a sort of prayer. In an artistically brilliant move, Gordon and Fitzgerald have tied in the history of small-scale portraiture and photography, paying homage to the modern “miniatures” that have been forgotten.

In this delicate matrix are full, richly lived lives that Gordon and Quillen will us not to forget. They are radicals because they make them so: forgotten counterculture icon John Sex, Gordon’s family’s taxman Lou, a music producer and sometimes performer named David Hahn, a football player who lived on the other side of a town’s train tracks. The list goes on, punctuated with the insistent tick-tick-ticking of a life’s internal clock.

What sets it apart from a heartfelt obituary is the immense artistry of the show. There is not a moment when Gordon is not moving, his hands as emotive as his voice and wide, forward-facing eyes. It is a verbal, tightly timed tour de force, where breath, whisper, and sucking one's teeth all take on added significance. So too words and phrases that are used on loop, the stage becoming a sort of pantoum to those who have come and gone. On percussion and synthesizer, Quillen fills in the empty spaces, song filling the room like a long-lost friend.

For those familiar with Gordon’s work—he is an out, queer artist who has made work specifically about queer lives in the past year—it is not surprising that he holds up several figures in the LGBTQ+ community. But its impact, particularly during a Pride Month the White House has chosen not to recognize, is still momentous: these are shoulders of a movement, or many movements, on which we still stand, and too often forget to pay homage. (The festival’s brochure, curiously, omits both the words “LGBT” and “AIDS Crisis” from its synopsis for the show).

It’s a sort of magnificent kaddish—a chance to speak people back onto the record, to restore dignity where Google has left little trace of it. Throughout, Gordon has embedded a sharp critique of the decades that have come since: the corporatization of counterculture and weirdness, the gentrified spaces that now occupy the neighborhoods of his youth, the sharp, unwieldy ladder that comes from artistic ambition.

But it’s a critique that is wonderfully self-aware: the very thing that has allowed him to criticize the ladder is the fact that he has climbed enough of it to have this show.

It’s a process, in many ways, that extends beyond the stage. Several years ago, the artist (and then Radicals cast and crew members) started using the names of the dead on their Starbucks orders, the house of memory literally rebuilt in a corporate coffee shop, with white and green cups and magic marker. At that magic moment a barista shouted out an order, a body was spun back into being.

In the end, that’s what we are left to grapple with. We ask ourselves: how am I remembering? How am I being remembered? What have I forgotten, and what is the internet letting me forget? Am I on the ladder or under it? What does the ladder even mean anymore?

Back on stage, Gordon reaches his last radical, a childhood babysitter named Elaine who lived in the gig economy before it was ever called the gig economy.

As he speaks, photographs of her flash across the screen. Elaine in his mother’s old dress. Elaine in a yellow leotard she probably found at a thrift store. Elaine across the floorboards of a long-gone apartment, facing away from the camera as her robe trails behind her. She is beautiful. She doesn’t ask anything of you. But by now, you know: her body is a prayer. There's only one thing you have to do.

Say her name. Say all their names.