Are They Not A Jew? 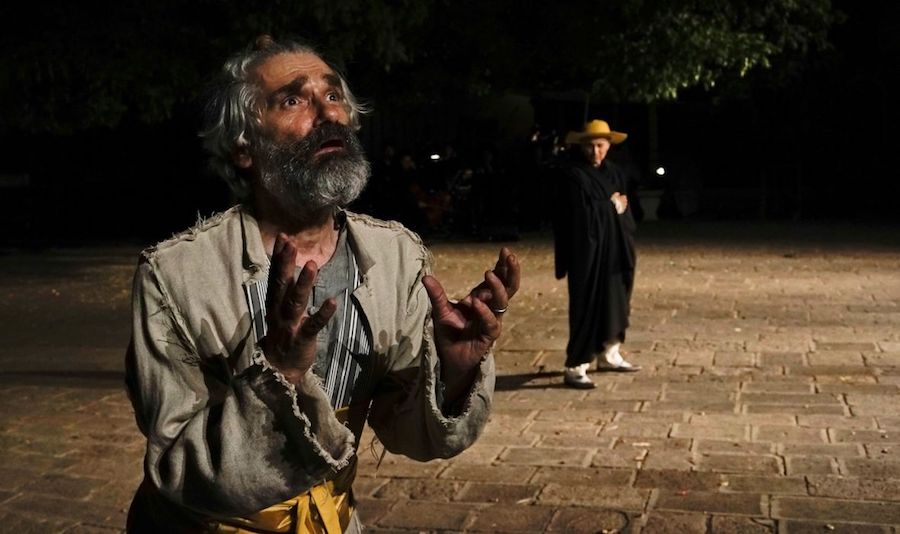 Courtesy of The International Festival of Arts & Ideas.

Bassanio and Shylock weave around each other in full sentences. Bassanio needs money. Shylock needs his word that a loan will come back repaid in full. He’s played this game before and gotten burned. He raises the stakes. A pound of human flesh.

It’s a story we’ve seen before, maybe many times. Or is it?

So unfolds Compagnia de' Colombari’s adaptation of Shakespeare’s The Merchant of Venice, which opened Tuesday night in the Yale Law School’s outdoor courtyard. Part of the International Festival of Arts & Ideas, the work runs through Saturday night. More information and tickets are available here.

Set largely in Venice’s Jewish ghetto, this Merchant of Venice starts on familiar footing: Bassanio (Titus Tompkins) needs money to pursue his great love, the rich Portia of Belmont (Linda Powell), and looks to his friend Antonio (Sandro Isaack) for help. Antonio doesn’t have the dough though—he’s a serial entrepreneur without a lot of extra disposable income—but he’s willing to do anything for his friend. So Bassanio seeks out Shylock, a loanshark who must live in the city’s Jewish ghetto by 16th century law. They make a deal to which Antonio, as guarantor, agrees. A pound of Antonio’s human flesh if the loan goes unpaid.

Parallel narratives race by: Lorenzo (Paul Spera) captures the heart of Shylock’s daughter Jessica (Michelle Uranowitz) and so too her person, as she slips away with him in the night and leaves the Jewish ghetto behind. Shylock becomes an embittered and vengeful man, cursing the Christians that have taken his child and his dignity. And his losses just pile from there, as other characters make a mockery of that which is not familiar to them.

But this production is and is not the Merchant to which we are accustomed. While the language of the show remains largely unchanged, the world of Venice shifts around it, becoming much more diverse and layered in its telling of the story. It’s a rich cast, with exciting faces often not seen (and certainly not seen in Early Modern times) in the delivery of this text.

As a troupe of musicians heads toward the stage from an archway in the Law School’s courtyard, they signify not just the beginning of the show but the start of a boisterous Carnival season, in which characters can be at once themselves and not themselves. A spray of animal sounds rise up in the falling darkness, distinctly not human as they set this world into motion. Sections are delivered in Italian, tantalizing if for a moment of disorientation.

It’s a mellifluous foundation for the play’s biggest shift: there are five Shylocks (in order, they are played by Sorab Wadia; Frank Rodriguez, Trezana Beverley; Michael Rodgers; John Rothman), adding new racial, religious, and gendered dimensions to the original character. It’s a change we can only notice overtime, as they shape-shift while delivering the lines—and bearing the accusations—that have marked the character as villainous for hundreds of years.

The Shylocks hold weight. As they appear—apart and together, in the courtyard’s faux-cobblestone walkways and on the stage, among characters and severed from them—they are marked by deep, clinched yellow sashes that are reminiscent of another yellow marking pinned on Jews during the Second World War. Over two hours, they complicate a character that history, stereotype, and the visual record has not been particularly kind to.

This is a play that wants—and deserves—to be loved for a lot of reasons. For one, the quintupling of a central character magnifies Shylock’s every line: it amplifies his rage, but also the sense of great injustice that has been brought upon him. In character, Trezana Beverley and John Rothman are particularly moving as they bellow Shylock’s lines and scream into a great void, pained to the core.

The addition of cast vocals and musicians—which feels like more of a return to the Bard’s tradition than move away from it—adds luscious texture to the show. As scenes unfold and characters are introduced, musicians (no doubt under Coonrod’s sharp eye) take careful cue, launching into bombastic and doo-wop-esque melodies that match Portia’s suitors, or the frivolous debauchery of carnival. They do a significant amount of heavy lifting, playing to an ominous carnival sequence that ends in a long, blood-curdling scream.

Their presence fits into a whole sensory experience of being outdoors. As violin, cello and trumpet travel over the courtyard, they join the rising and falling of birdsong, crunch of pine needles and whisper of feet on stone. As epithets are hurled at Shylock, the rustling of branches strangely rises to meet them.

In perhaps the show’s most stunning sequence, the audience and stage are bathed in bright red light as musicians announce Shylock’s trial. On stage, audience members become part of the play, horn filling the space as they don red shoulder sashes join the jury. On opening night, musicians had a sort of accompaniment that could not have been more perfect (and indeed, chilling): the high-pitched wail of a nearby cop car as it drove downtown.

The result is a piece that, in its strongest moments, feels heartrendingly timely. In Merchant’s multiple Shylocks emerge a portrait of someone hardened by the designation of “other” and the massive intervention of state-sanctioned borders on his life. We are brought to our knees as the final Shylock (John Rothman) delivers the play’s memorable “I am a Jew” speech, delivered as judgements on his life, possessions, and religion are leveled all around him.

There’s a great pointlessness to the ghetto’s walls, uneasy parallels with our policed society emerging as Shylock is scrutinized, called “dog” and “alien” in the streets and to his face, and suffers unfathomable losses to those who hold power. Yes, we think—he is villainous, but who among us would not be when faced with the same set of circumstances?

More poignant to this New Haven performance is another aspect of our Shylocks—that they are unable to recover as their child disappears from their life. The resounding slap of that loss is fresh and unrelenting; it should make us think about the lengths to which we would go to protect the tiny and not-so-tiny humans in our own lives. And indeed, the lengths to which we should be going to fight for the Shylocks in our own universes.

And yet, Merchant of Venice ultimately doesn’t pack the punch it seems to so desperately want to. First, there’s the issue of the show’s staging in the Law School’s courtyard. We get the message: we are supposed to think about what it is to be in this enclosed, ostensibly old setting where justice is taught and served, the rights of man scrutinized and argued.

Actors do use the space strategically, running up and down its uneven walkways, ducking in stone archways, leaning out of a second-story window at one point. But unlike the show’s original productions in Venice’s Jewish ghetto and the Padova Prison, the Law School feels cheesy and artificial, a gimmicky stand-in for the spaces where history lives and breathes.

It's an adaptation about ditching borders in a courtyard built by a multinational corporation, with an extra $45-$65 paywall to get in. Sitting around the stage in rows and rows of chairs, several members of Tuesday’s audience spent the show grumbling and standing intermittently, complaining that they could not see the play from their seats.

But more off-putting is the show’s central argument: that more Shylocks, with more literal diversity, will render this work of high art accessible for the masses. The cast’s richness, still seldom seen in large ensemble productions, is an asset to this play. Indeed, in some ways, it alone is a radical statement of inclusion, and breaking down borders that are ultimately arbitrary.

But what it seems to forget in the process is that Shakespeare has always been accessible to the masses. It’s not snooty or removed; the language doesn’t shut listeners out if they give themselves time to ease into it. Shylock, despite some raging antisemitism that we could all do without, has never not been complex. He is a character whose feelings are deeply felt, the injustices he bears more than the butt of a Jew joke.

But this is not Sarah Mantell’s Everything That Never Happened, taking on the question of Jessica’s agency, or Shylock’s relationship with his daughter—we don’t see the full complexity of the character, just more of him.

In part, the disconnect is owing to the show’s company. As Portia and her lady-in-waiting Nerissa, Linda Powell and Sofia Jean Gomez are dynamic, turning the stage and surrounding space into their playground for the course of the show. Powell, in particular, fills the whole courtyard with her presence, centuries-old words easy and spirited on her tongue as she schemes a momentary escape from her biological circumstances. Francesca Sarah Toich is thrilling and dynamic as Lancilloto, throwing her voice in ways that the audience can’t imagine until they hear it.

But the rest of the cast doesn’t quite sell it. They have the mannerisms and the words, but lack the conviction. Three of our Shylocks shout and strain to get out their lines, their mastery of the text technically perfect, but not particularly emotive. Antonio speaks at points as if he too knows that the show runs over two hours, and there is no room for a bathroom break. Bassanio capitulates too easily.

Even as it ends, the projection of the word MERCY across a brick wall seals the work’s fate: the director doesn’t trust you enough to understand that it’s about forgiveness and humanity. Audience members, perhaps, should exercise both: it’s strong but flawed, still evolving as it navigates the current landscape. But aren’t they, too?

Compagnia de' Colombari’s The Merchant of Venice runs through Saturday June 23, at the Yale Law School. For more about tickets, visit the International Festival of Arts & Ideas' website.