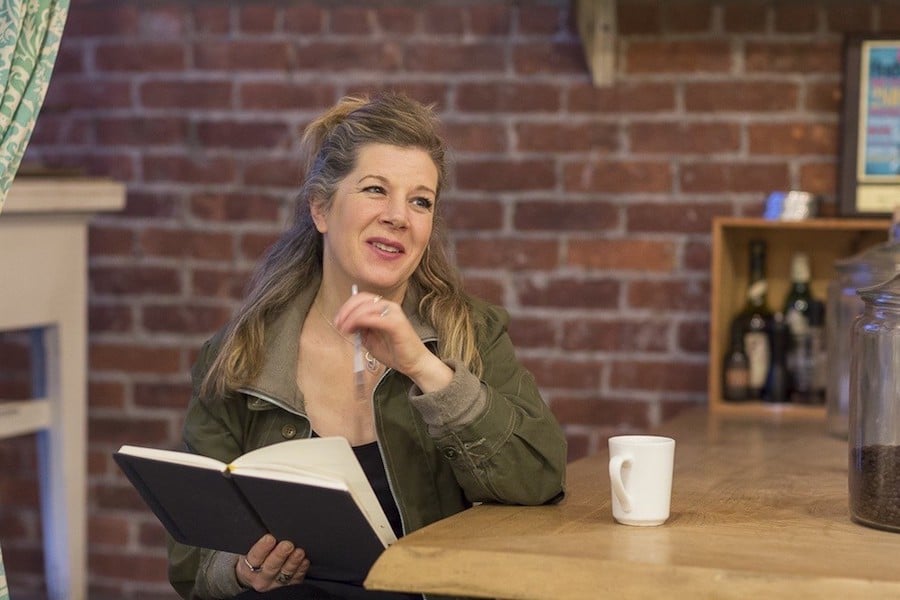 Dar Williams on her book tour. “I grew up with a downtown and a lot of people grew up with a downtown, and there are all sorts of economic arguments for why it’s so important to have that collection of stores who sponsor little leagues, have apprentices," she said in her talk last Sunday. Photo Courtesy of the artist and her website .

When musician Dar Williams took the stage in the lecture hall at the at the Yale University Art Gallery this past Sunday, it was clear that she had done her homework.

She was there to deliver a talk titled “How to Make Your Town Somewhere Everyone Wants to Live” for the International Festival of Arts & Ideas. The theme comes from her most recent book, What I Found in a Thousand Towns: A Traveling Musician’s Guide to Rebuilding America’s Communities—One Coffee Shop, Dog Run, and Open-Mike Night at a Time.

An acclaimed folk musician with a career spanning multiple decades, Williams began by singing “The Hudson,” a track from her 2005 album My Better Self.

“This is a song from my river to yours,” she said, alluding to the Hudson in New York and the Quinnipiac and Connecticut in Connecticut.

From that point on, the artist held the audience’s attention in an unassuming, down-to-earth way, punctuating her talk with selections from her broad catalog of music. Her voice was soft and powerful, simple and emotive, like your best friend sitting down to sing you a song. From her, a story of travel and towns—and what her own brand of democracy looks like— unraveled through personal anecdote.

Williams began touring in the mid-nineties. She noticed a distressing commonality among the towns she visited: empty storefronts and downtowns with lots of boarded-up windows. Her manager told her it was because of the big boxes.

“And I said, ‘What’s a big box?’” she recalled. The audience joined her in a knowing chuckle.

Williams explained how, with the advent of big box stores, malls, and online shopping, “all this life went out of the downtowns” across America, often in concert with sudden downturns caused by the loss of a mill, factory or mine.

But, she added, “At the same time that I was starting to despair, I saw life coming back.”

“What these towns were building,” Williams read from her book, was something that she called “positive proximity.”

“Positive proximity is a state of being where living side by side with other people is experienced as beneficial,” she read. “I have been seeing this phenomenon of town-building for more than 20 years.”

Over the course of her talk, Williams highlighted specific “mechanisms that jump-start positive proximity and sustain it.” For her, these include creating community spaces, organizing identity-building projects and mastering the skills of “translation,” which she defines in part as sharing skills, forming partnerships, communicating effectively, and reaching out to the margins of society to create points of access for as many people as possible. She was clear that this work is not partisan— the towns she studied for the book vary in their political leanings.

“What I’ve found in towns that have high positive proximity is that they are looking to the perimeter” and are interested in fighting poverty and racism, Williams said. “They are looking to be inclusive, to find the bridges, so that there is a kind of prosperity for all, a quality of life for all.” She added, “I encourage everyone, in their own way, to think in bridges.”

Many in the audience seemed to respond warmly to her ideas. One person described Whitneyville Cultural Commons on the New Haven-Hamden line as an “everything happens here” center where “everyone is welcome.” Williams’ face lit up in recognition as she described similar center in Seattle whose founders intentionally reached out to ensure that everyone in the neighborhood would feel ownership of the space.

Williams took a break to play an up-beat tune from her second album Mortal City called “Southern California Wants To Be Western New York.” She said the song was a “way-finding point” in her understanding of the ways towns build their own identities and both celebrate and grapple with their own histories.

“Tempe, Arizona thinks the Everglades are greener and wetter/ Yeah, and Washington, D.C. thinks that Atlanta integrated better,” she sang. “But I think that southern California has more pain that we can say/'Cause it wants to travel back in time, but it just can't leave L.A.”

Another audience member had to know: what if a town hasn’t hit the skids? Where, then, is the motivation to make change?

Williams recalled Wilmington, Delaware, a town she said faced—and still faces—wealth disparity and racial division. The town poured resources into a riverfront park in the middle of the city that all citizens could enjoy. Though the project didn’t fix everything, it did increase positive proximity.

She described how Chappaqua, New York founded an interfaith organization to build connections between congregations. She mentioned Easton, Maryland, that, while not “down on its luck,” still revitalized a theater downtown and created a “café culture” that “allowed people to sit and talk to each other,” stimulating community conversation and spurring other projects.

Williams points out the fact that wealth can buy privacy, which can lead to isolation. The spaces she illustrated “have allowed people to remember and to see that they want to be around each other.” If there is already affluence, Williams suggested, the appeal of culture might draw people out more than a sense of obligation will.

“Coming into the public square on your own terms is essential for affluent communities. It’s not out of a sense of guilt, it’s out of a sense of generosity and beauty,  she said. She pointed out the beneficial changes that can be made when philanthropy turns its focus downtown instead of towards national organizations.

Williams stressed joining forces and proposed holding a contest for groups collaborating to design safe havens in the city. She cited NXTHVN, a supportive community arts space in development in Dixwell founded by Yale alumni Titus Kaphar and Jonathan Brand. She  suggested “anything that is going well in New Haven that is not of the campus” as a starting point to seek collaboration.

She also referenced the many locked gates on the Yale campus.

“How can we dream towards open gates in the future?” she saked. “Just living in our imaginations: maybe that’s how we start.” She added that where there is a social contract in place—where trust is offered— “trust begets trust.”

In addition to her observations while touring, Williams said her own experiences at Wesleyan University in Middletown, Conn. have molded her perception of “town and gown” relationships that exist in college towns across the country.

She talked about moving beyond a service mentality, suggesting that schools and communities do best when they are actively seeking to build authentic relationships with each other. She suggested that getting off campus and involved in the wider community can broaden students’ set of role models, helping them make a healthy adjustment to adult life after college.

“A college education can get very rarified,” she said. But towns—and the diverse people in them—can teach you more authentically about who you are and who you will be.

She added that education is an important social contract, a safe haven created specifically for learning. To illustrate her point, she sang “After All” from her 2001 album The Green World, an intensely emotional song about overcoming depression.

“I started to unravel at Wesleyan,” she recalled before playing the piece, “and when I started to fall, someone was there to catch me.”

Towards the end of the talk, one questioner expressed doubt regarding Williams’ distinctly positive messages about our future as a nation. With all that is going on in the world today, “are you really that optimistic?” she asked.

Williams said she gets that question a lot. “People say, ‘So, wait a minute. You’re saying that one of the ways that we can create more access and go into the 21stt century more harmoniously in terms of diversity and accessibility is…like…a garlic festival?’”

“And I’m like ‘kind of,’” she said with a little laugh at how simple it sounds.

“The towns that have high positive proximity are the ones that are looking to the frontiers of social justice,” she added. “A lot of towns now are building up their toolboxes of communication and it is leading them in the direction of the true, strong, proud democracy that we aspire to be.”