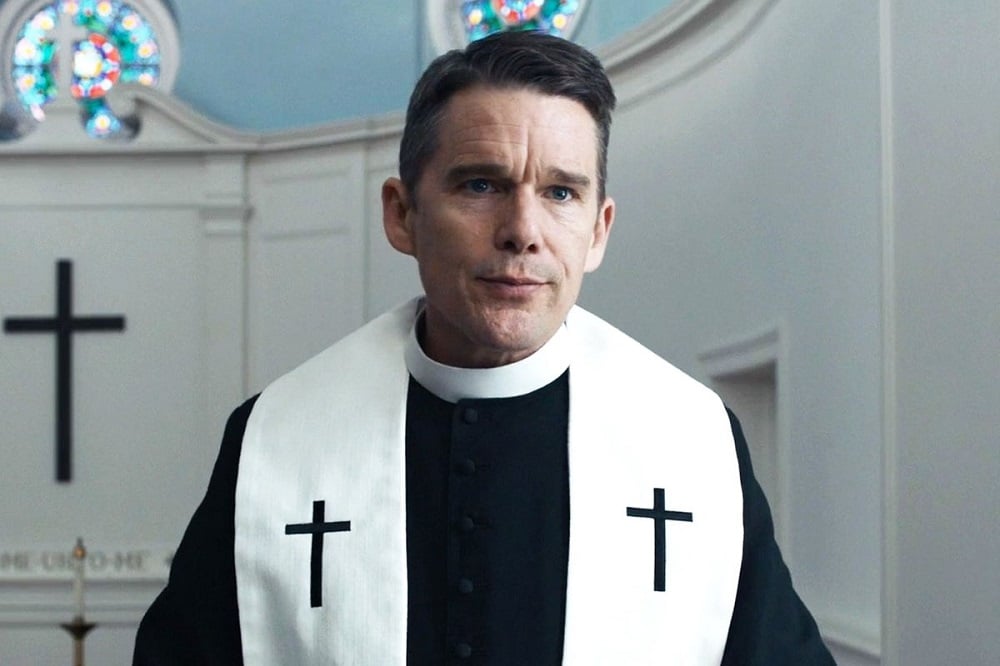 Wisdom is the ability to hold two contradictory truths in one’s head at the same time and not go crazy.

So opines the small-town minister at the center of writer-director Paul Schrader’s new crisis-of-faith drama First Reformed, a movie that is riveted in both character and story and cinematic style by the serene promises and self-defying challenges of finding balance between two seemingly irreconcilable ideas.

In the eyes and pen of Reverend Toller (Ethan Hawke), the two contradictory truths that define existence are hope and despair. For most of the movie, he and Schrader almost trick the audience into thinking that Toller is capable of finding some kind of equanimity between the two. But this man of God is an extremist at heart, and extremism has no truck with moderation.

First: despair. Toller is the minister of a small, historic church in upstate New York, and the crushing monotony of his life is defined by an almost outrageous Protestant austerity, if willful self-negation can ever justifiably be called outrageous.

Toller preaches every week to a handful of congregants at a church that many in town view as more of a historic souvenir shop than a functioning place of worship. He lives in a nearly unfurnished home decorated with bare lightbulbs and a solitary wooden chair, where he spends most nights hunched over his writing desk, pouring himself glass after glass of whiskey as he documents the mundane plodding of his life in a diary that he vows to destroy after a year of determined self-reflection.

The diary serves as the point of entry for the film’s primary and most subtly impressive stylistic device: a voice-over narration that corresponds word-for-word with Toller’s writing and, by extension, word-for-word with the solitary minister’s perspective on his life.

Through his diary, and his narration, Toller yearns to communicate with God through a means more direct, and perhaps more unflinchingly honest than prayer. But he struggles. He sees no purpose or redemption in his life. The diary is a catalog of a slow, steady self-immolation, a chronicle of , to quote Toller quoting Kierkegaard, the  “sickness unto death” that is this minister's utter hopelessness.

Hawke brings to his performance a dutiful impassivity. His lips pursed, his brow furrowed, her plays Toller as man trying to understand God through better understanding himself. He tries his mightiest to keep any illusions he might have at bay. Like his spiritual idol, the Trappist monk and prolific writer Thomas Merton, Hawke's Toller aspires to silence and simplicity.

Second: hope. The plot of the movie hinges on two key disruptions to Toller’s life.

A young, pregnant congregant named Mary (Amanda Seyfried) asks him to counsel her husband, an avid environmentalist recently released from prison who is in the throes of his own despair over the prospect of bringing a new child into a world on the brink of climate disaster.

The purposeful mentorship Toller seeks to find in his relationship with Mary’s husband, and then with Mary, provide the shape and motivation necessary to act on his rising discontent with a 250th anniversary reconsecration of his church, planned by the pastor of a successful nearby megachurch and bankrolled by a local paper industry magnate who’s business is one of the top polluters in the country.

As the man who literally wrote the book on slow, spiritual cinema in his 1972 study Transcendental Style in Film, Schrader’s camera, like that of his cinematic icons Yasujiro Ozu and Robert Bresson, is still, precise, and patient.

Internal suffering and repressed hopelessness is not the easiest sentiment to externalize in a way that cinema, a medium so contingent upon visual expression, demands. And yet Schrader achieves just that, his camera patiently waiting at a distance as Toller, clearly defined in sunlight and shadow, descends into his routine. The camera remains in its patient place, occasionally coming a bit closer to reveal Toller’s sallow, impassive face, ss the story that Toller commits to in his head and on paper slowly fracture from the reality the audience sees play out on screen.

Broken only by brief respites of liberating physical activity and ecstatic, delirious connection, the style matches the seeming inevitability of Toller’s life: fixed, inescapable, an attempt at blankness that is a feeble mask for a profound, roiling inner discontent.

If Schrader’s admiration for the austere, reverential, bare-bones aesthetics of Ozu and Bresson are felt in every frame of First Reformed, so too is his decades-long filmic exploration of violent alienation, epitomized by his 1976 screenplay for Martin Scorcese’s Taxi Driver.

There’s more than a little Travis Bickle in Toller’s long-suffering man of God. The two share a similar disgust of other people for their venality, materialism, and exploitative lust for profit and please pleasure. Spurned by the world around them, they turn inwards, inconsolably, delusionaly, fantasizing about a connection with an impossibly pure idealized figure who will help relieve them of their loneliness.

Violence, they believe, is the only outlet for their righteous indignation, the only catalyst for some kind of spiritual redemption for themselves and the sinful world around them.

Here is the heart of despair, that angry aloneness that decays Toller without him even noticing, notwithstanding his fervid attempts to know himself through writing, prayer, and faith. But also the edge of a delusional, naïve hope: that he is the savior, that he has found the one, simple solution to his and the world’s problems.

By the end of the movie, Toller finds himself at the furthest reaches of hope and despair, no bridge possible between the two.

The two contradictory truths tear him asunder, completely divorcing him from the mundane groundedness of everything he hoped to achieve through his journal, leaving him in the unsteady, delirious hands of fantasy.

Click on the audio player below to listen to a recent discussion of First Reformed on WNHH's "Deep Focus" program.