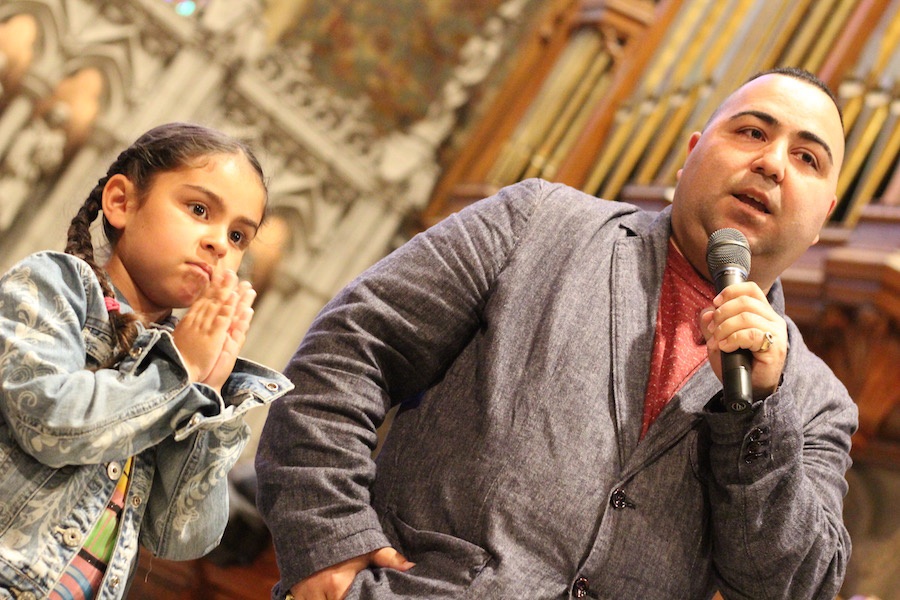 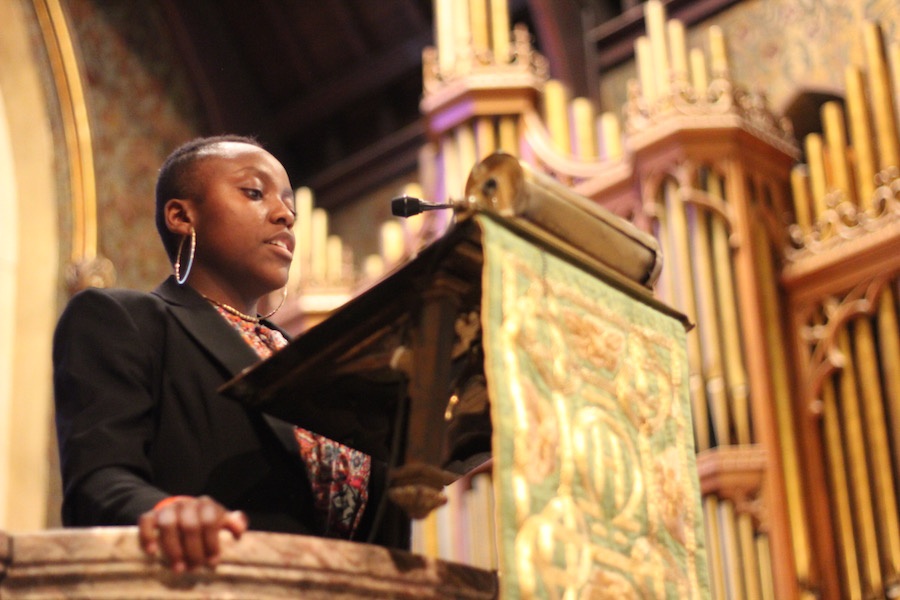 Gladys Mwilelo: “Tearing families apart is like switching off a light on someone who is looking for direction at night." Lucy Gellman Photos.

Gladys Mwilelo spent the first 15 years of her life fleeing civil war. Now, she is using her experience—and her voice—to advocate for immigrant families separated and incarcerated at the border.

Mwilelo, 19, is a refugee from the Democratic Republic of Congo. Saturday afternoon, Mwilelo joined a packed lineup of speakers at a statewide “Rally for Humanity,” held at Trinity Episcopal Church on the Green. Hosted by Integrated Refugee and Immigrant Services (IRIS) in honor of World Refugee Day, the three-hour event featured a full lineup of speakers and concert from musical artist Thabisa, herself an immigrant from South Africa. Over 300 attended.

Originally, Saturday’s festivities—a “world cuisine tasting” from CitySeed’s Sanctuary Kitchen and world music concert from the artist Thabisa— were intended to double as a fundraiser for IRIS. In the months since an initial “Trump bump” in financial support, Director of Community Engagement Ann O’Brien said that donations to IRIS have dropped off. She attributed it to a rising number of human rights organizations that are under attack from the current administration. 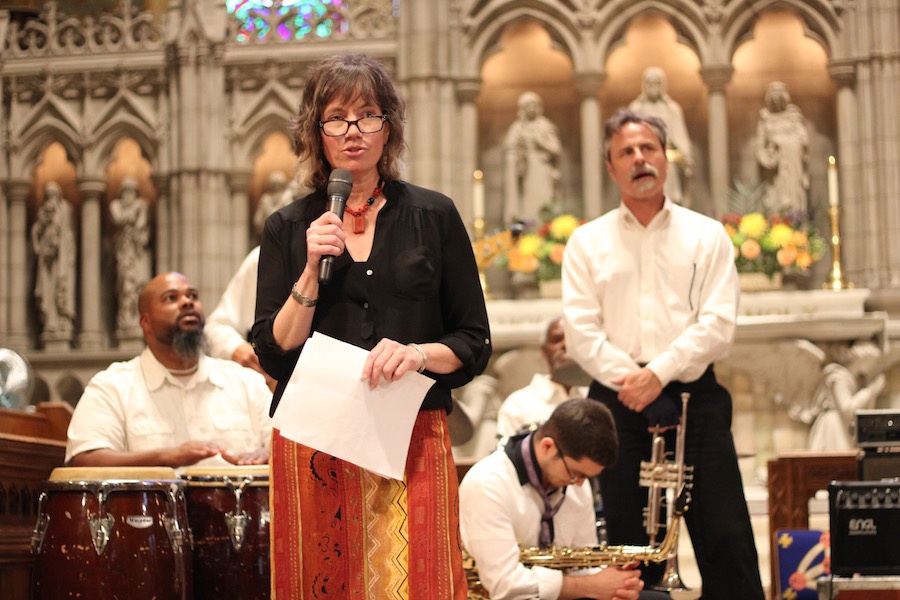 But when staff members began reading about how President Donald Trump’s “zero tolerance policy” was separating families at the border, they decided to use the celebration as a rallying cry aligned with their message of refugee resettlement and acculturation.

On Wednesday, when Trump signed an executive order announcing the administration would no longer separate families but detain them together, for what could be indefinite periods of time, they doubled down and ironed out final details. Then they opened to the public, put a donation table in the lobby of the church, and hoped for the best.

“We needed this to be a fundraiser,” said O’Brien after the event. “But this was too important.”

Among the rally’s speakers, several addressed the psychological and legal cost of separating children from their parents, as well as incarcerating families. Clinical psychologist Megan Goslin, associate research scientist at the Yale Child Study Center, stressed the importance of reuniting children with their families as soon as possible, describing the trauma that children experience when separated from their parents. 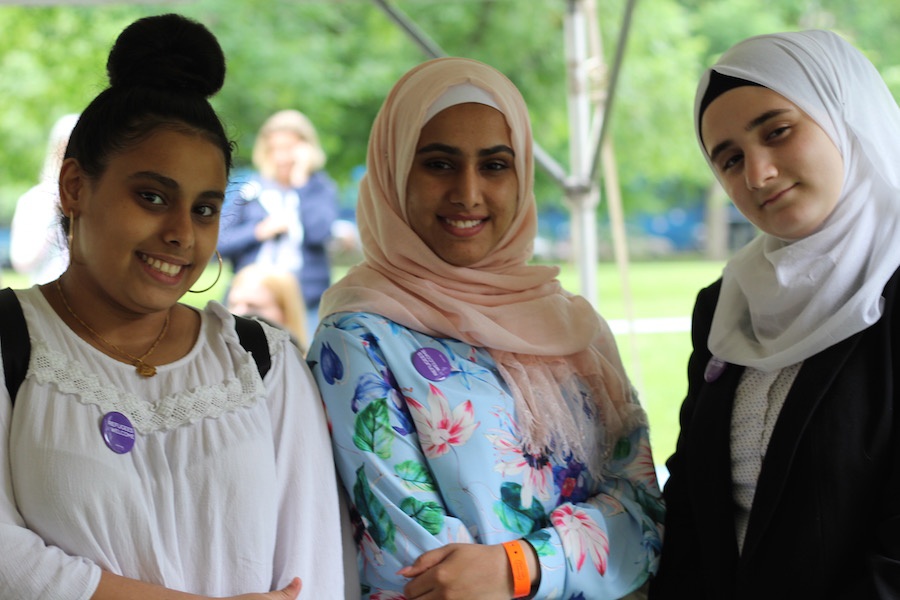 She recalled seeing kids in her own work in the Child Development-Community Policing program who had been torn from their parents through violence, unable to communicate as their bodies “shut down” to manage the shock of what they’d been through. The first step, she told the audience, is “reuniting them with their families whenever possible. She spoke about her excitement to cast a progressive vote in the midterm elections—but conviction that Trump’s policy must change long before then.

Dorothy Tegeler, co-founder and co-director of the Asylum Seeker Advocacy Project (ASAP), spoke to attendees about the legal implications of the polices currently in place at the border. Zeroing in on Trump’s executive order earlier this week to detain families together, she urged attendees to “not be fooled” into thinking the order represented a policy that was any better—or legally sound. 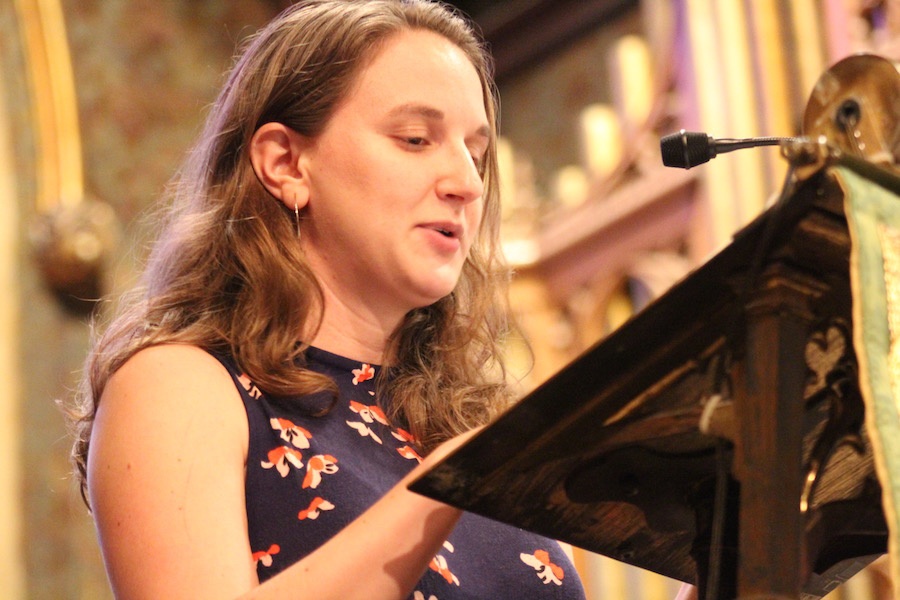 Dorothy Tegeler: “Imprisoning kids for long periods of time is not only horrific, it’s also illegal."

“Imprisoning kids for long periods of time is not only horrific, it’s also illegal,” she said, her voice emotional but steady as it reverberated through the church. “Family separation and family detention are two sides of the same coin. They are both abuses of human rights, and we should push for all families to be together and free.”

Tegeler also addressed Attorney General Jeff Sessions’ decision earlier this month in Matter of A-B-, effectively barring victims of domestic, sexual, and gang violence from pleading their cases as grounds for political asylum. Calling the decision “terrible,” Tegler said that she and members of ASAP are currently “in communication with over 2,000 asylum seeking moms,” encouraging them to keep fighting their cases.

She urged attendees to fight against the policies by recognizing that “this decision does not end asylum for survivors of domestic and gang violence,” and using that knowledge to help those who may need it.

There representing U.S. Sen. Richard Blumenthal, Joe Rodriguez addressed the audience with his young daughter in tow. "We as a community will not stand by and watch this happen," he said.

“My message to you is you can still fight,” she said, directly addressing potential asylum seekers and friends of asylum seekers in the audience. “You should go to your court date or your interview date and try to find a lawyer and keep fighting.”

But the rally’s most affecting moments came as speakers turned to personal anecdote, and spoke from the heart. Welcoming the audience into Trinity—his house, O’Brien joked—Rev. Luke De Volder recalled how emotional it has been for him to watch Trump’s policies unfold as an immigrant who is still seeking American citizenship. Originally from the French city Clermont-Ferrand, De Volder invoked scripture, denouncing Sessions’s version of Christianity as profoundly unfaithful to its roots.

“The founders of our religion—Abraham, Isaac, and Jacob—were refugees,” he said. “Jesus, Mary and Joseph were in exile … every family is holy, and should not be separated. We are here to honor every human being.” 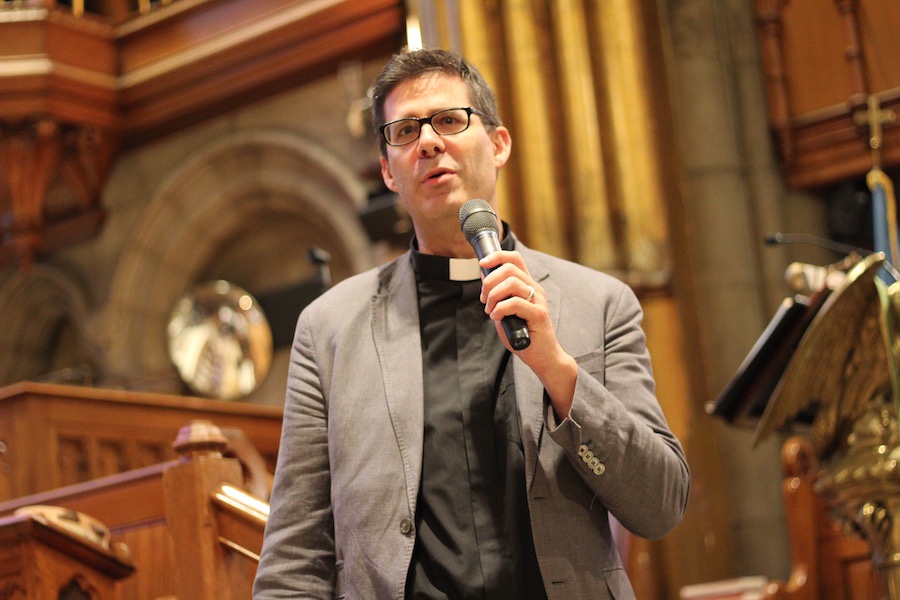 Taking not the pulpit but the front steps to be closer to the audience, State Rep. Robyn Porter told attendees that she has been watching the news from the border unfold not just as an elected official, but as a mother and grandmother.

“It’s a heartache and a bellyache to think that we have come to a point where we’re going backwards in time,” she said. “This is not okay. It is not okay to separate children, babies and toddlers and youth and teenagers from their parents. Because as a mom I can tell you, there would have to be something really terrible going on for me to take my kids in tow to a country I know nothing about in the hope of having a better life, but also realizing that that trip could cost us our lives.”

“These are not illegals,” she said. “These are refugees seeking asylum. Seeking a better life and an opportunity to live and not die.”

Calling the separation of families clear “child abuse and torture,” she recalled a moment years ago, when she was a new mom and lost her young son for five minutes in a busy shopping mall. In the time between their separation and reunification, she said thoughts raced through her mind. Had he been kidnapped? Was he scared? Was someone hurting him? Would she find him again, and would he be safe when she did? 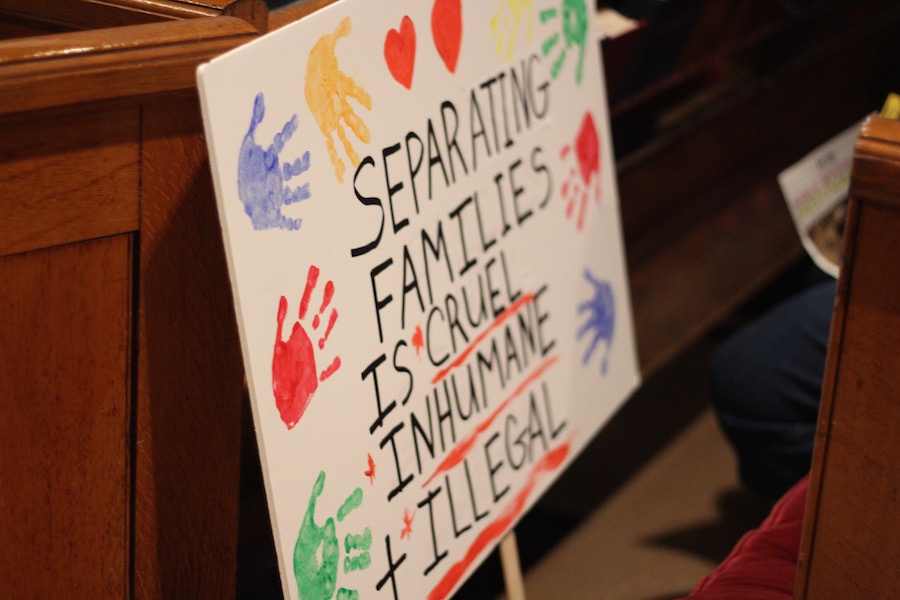 From that experience and her time as a community organizer, family member, and politician, she assured the audience that she would continue fighting with whatever legislative power she has. She added that this year, she is getting the best birthday gift she could have asked for—a trip to San Diego “doing what needs to be done on the front lines with these babies” on July 2, just one day after her birthday.

“We have to take action,” she said before leaving the stage. “We can no longer stand on the sidelines and act like this is not happening and this is not America. This is America, and this is happening. My question is: what are we going to do about it?”

The audience exploded into applause. Later in the rally, they would add shouts, whoops, and cries of “Sí se puede!” and “El pueblo unido jamás será vencido!” inspired by speakers Leonela Cruz-Ahuatl, Project Rescue program manager at the Connecticut Institute for Refugees and Immigrants (CIRI), and Professor David Pettigrew, a professor of history and philosophy who drew parallels with the Holocaust. 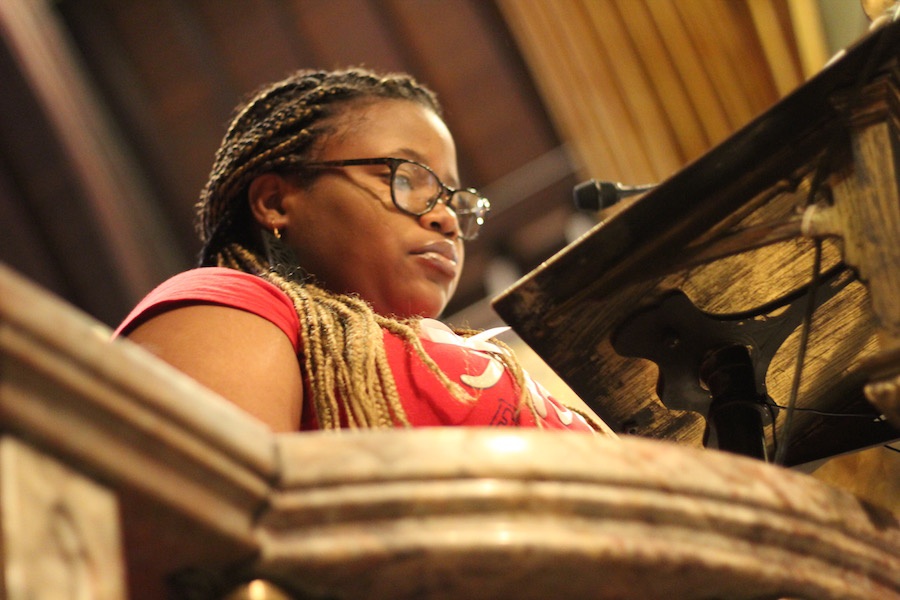 Throughout, IRIS’ own speakers—several refugees from the organization’s Young Leaders program—drew parallels between their own experience fleeing war and violence and the current fight for families at the border. Taking the stage to talk about a summer Civil Rights road trip she and other refugees are taking, Mariame Kazadi recalled fleeing civil war in Congo with her father and siblings. Having lived it, there’s not the option not to fight.

Nestled in the church’s second pew with her friend Nour Al-Zouabi, Mwilelo said she also had fighting words for Trump and Sessions. As a child, Mwilelo was forced to flee home in the Democratic Republic of Congo at two years old. Her family traveled to Burundi, where every family member who could work did, beginning from scratch.

She watched as her father found a lawyer and pleaded the family’s case to the United Nations, his application turned down over three times. And then in 2013, it was approved. The family came to the U.S., and started all over again. She graduated from high school and went on to Central Connecticut State University, where she is studying communications and journalism. Five years and a new political administration later, she said that World Refugee Day has taken on a bittersweet meaning. 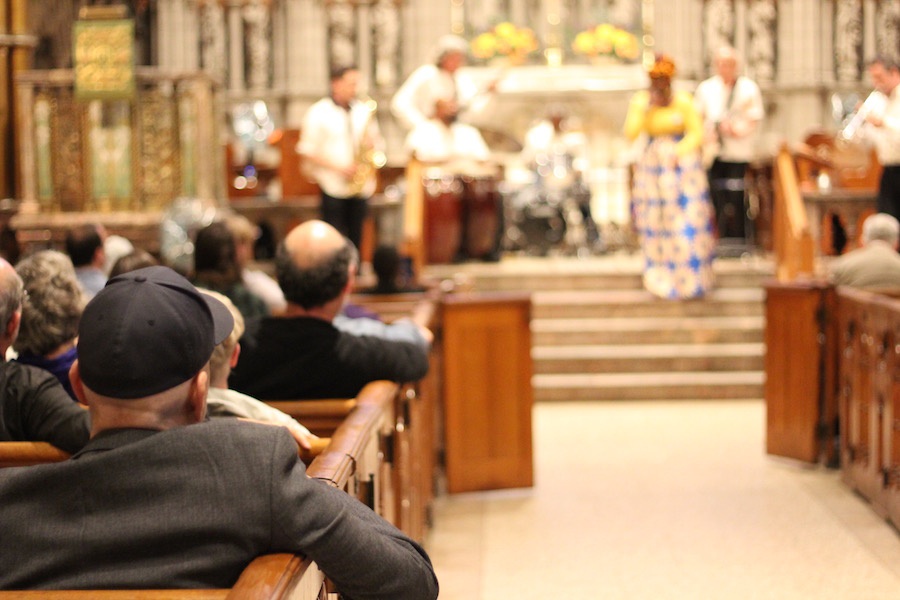 “As someone who crossed the ocean to be here, acceptance would be best shown by keeping families together, and hearing their cases,” she said to a burst of applause. “Every individual has a right to be here … I came here because another country gave me the right to go to court and defend my cause.”

“Tearing families apart is like switching off a light on someone who is looking for direction at night,” she continued. “Can he see where he wants to be going? The answer is no.”

As speakers wound down, Westville-via-South Africa musician Thabisa took the stage, dancing down the aisles and in the front of the church with her son as she invoked Miriam Makeba, then sang in both English and her native Xhosa. With a full band onstage, she rocked the house, getting attendees shimmying, snapping, head bopping, and occasionally dabbing in their pews. In the church’s upstairs choir lofts, Miriame’s father Joseph Kazadi stood and danced with his other two kids. 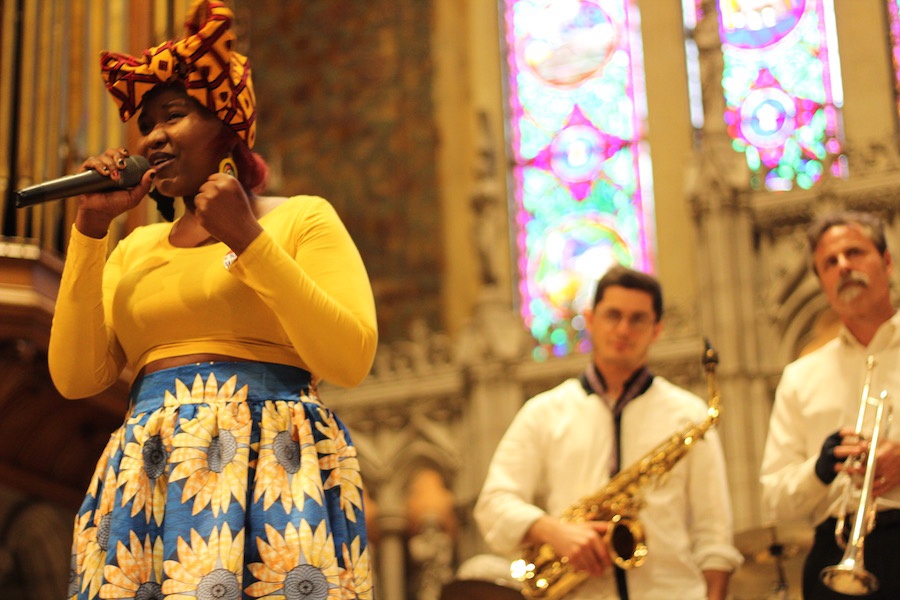 Then she slowed it down, speaking into the mic as if she was about to deliver a benediction.

“We have to fight collectively,” she said, her eyes glinting as she looked out into the church. “That’s what this is, the struggle. So don’t give up. America will be truly, truly back again, humane again.”