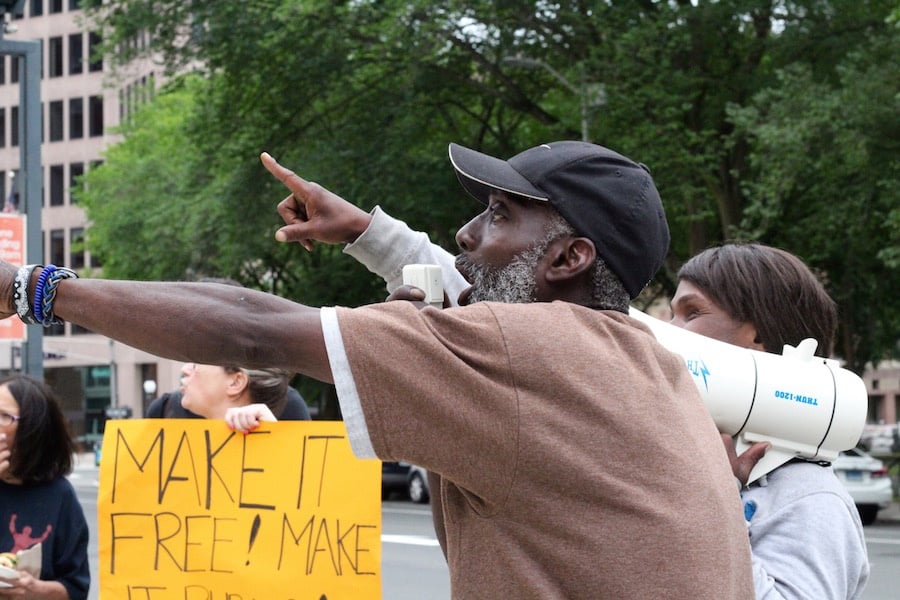 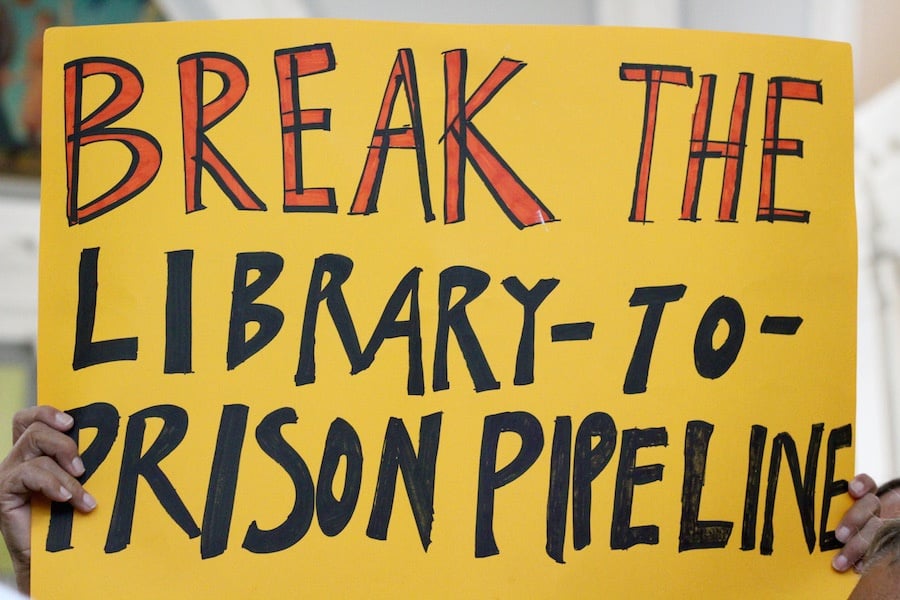 Is the New Haven Free Public Library still a beacon of democracy to all who walk through its doors? Or is it pushing out some of its longest-term and most vulnerable patrons to turn a profit?

Those two interpretations of the library clashed Wednesday at the NHFPL’s main branch, as protesters crashed the grand opening and ribbon cutting of “Ives Squared,” a new high-tech innovation commons and cafe on the library’s first floors. Over 250 attended the event, including 35 protesters and eight police officers.

The action started just before 5 p.m., as a small lineup of speakers gathered at one end of Ives Squared, and New Haven Police Chief Anthony Campbell stood at the other, blocking around 35 protesters from entering. Several held up signs reading “Break The Library-to-Prison Pipeline,” “Build Shelter Not Cafe,” “Housing Not Jails” and “Make Public Spaces Public.” From the protest line, trans activist Chardonnay Merlot, raised a video camera high and started rolling. 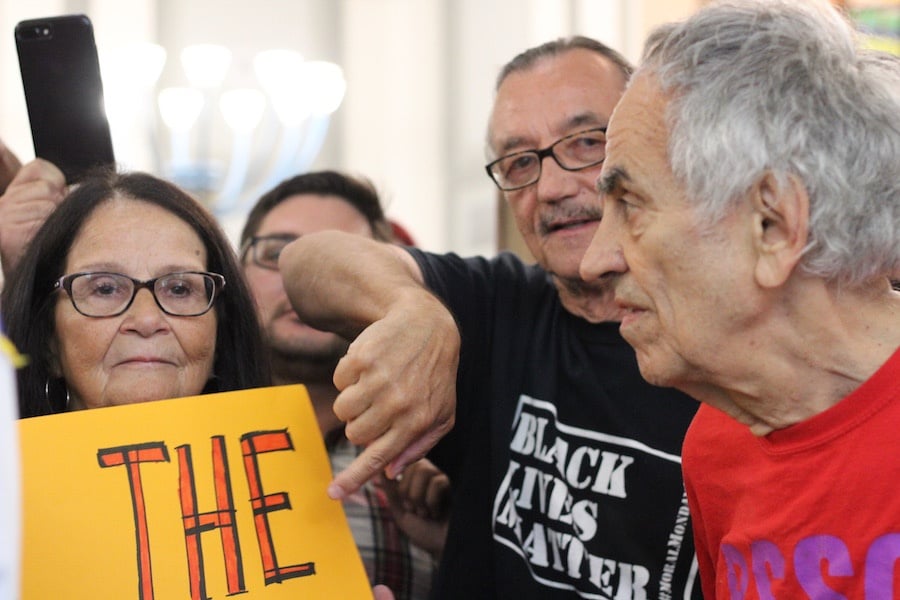 Around the space, attendees who had arrived earlier in the afternoon milled around, unaware of any commotion. It was only as Elm City Innovation Collaborative (ECIC) Chair Michael Harris welcomed the crowd with his first few remarks and police moved aside to let protesters in that the two groups began to acknowledge each other, police ushering protesters to a specific area of the room as remarks began.

“This is an amazing juxtaposition,” Hamden City Council Member Justin Farmer said as he entered, turning his head to look at protesters in one section of the room and attendees, board members, designers, donors and longtime library patrons in another. Posters broke up the majority white room as they continued trickling in. “Amazing!”

At the heart of that juxtaposition is the 5,820-square-foot space, and question of who gets to use it. Advertised as free and open to the public, Ives Squared comprises a digital “switchboard” or reference desk, nonprofit networking space, and techie tinker lab, as well as cafe and patio for patrons operated by Whole G Cafe and Bakery (read previous coverage here). The project began two years ago, when the library scored $150,000 in funding from CT Next, distributed through the the Elm City Innovation Collaborative (ECIC). Another $970,000, which included a match for ECIC funds, came from the city. 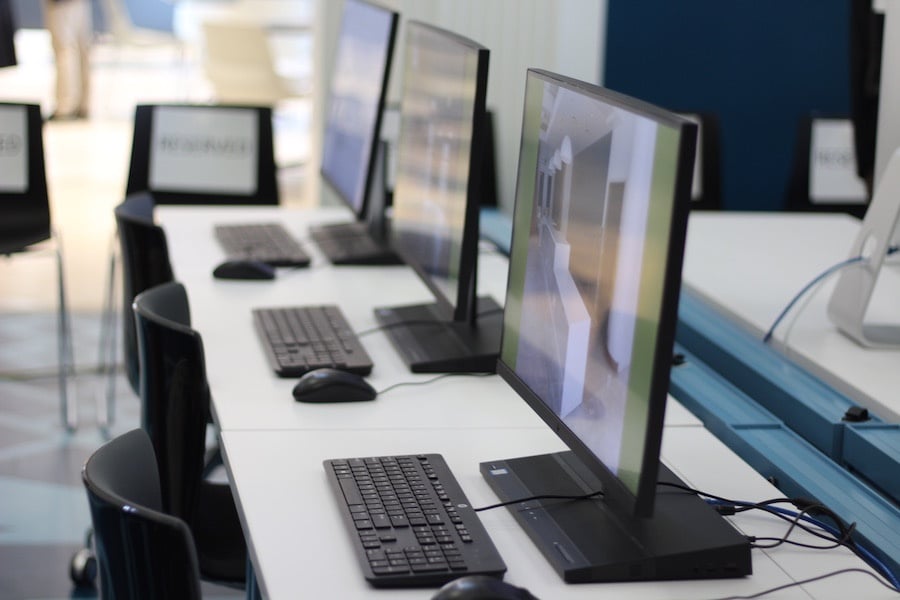 From its first phases of construction to opening Wednesday, City Librarian Martha Brogan has maintained that it is a free resource for all NHFPL members, including a large houseless population that the library sees each year. In an interview earlier this month, she said she envisions the space as adding to the free computer classes, tax filing services, passport and visa assistance, English as a Second Language (ESL) classes and sessions with Liberty Community Services that the library offers throughout the year.

In the new space, both she and Harris stressed, members of the public can receive assistance from Collab, another ECIC beneficiary that has prioritized refugees, women, and young entrepreneurs of color as it teaches entrepreneurship in the city.

But Farmer and other protesters said they’re concerned that Ives Squared may displace houseless library patrons while policing their poverty, forcibly removing them from the space for simply being homeless. In particular, he and others said they are concerned about the cafe, which replaces a reading room with a neat, wood-and-tile room that will charge patrons for coffee, pastries and food. 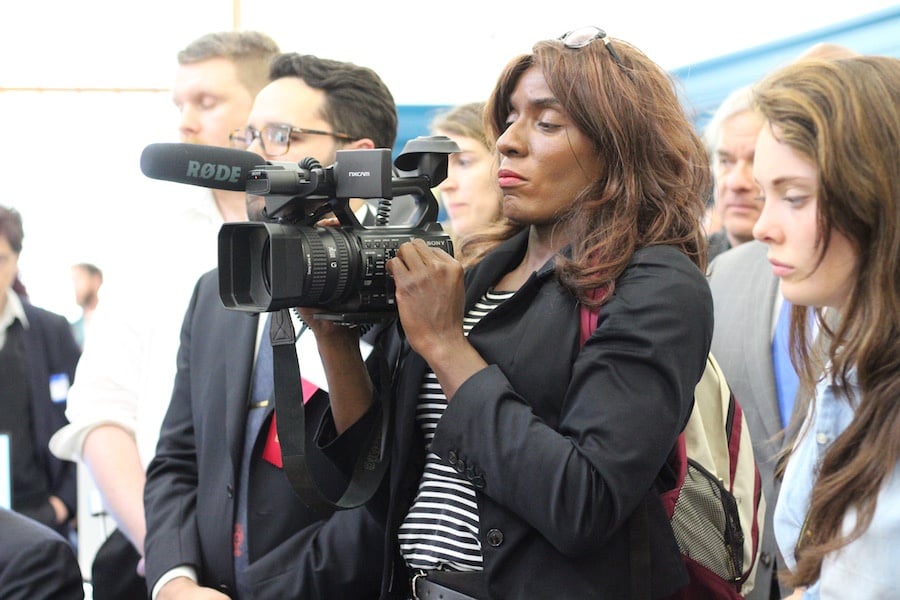 “I think the intention is to have people use the library and interact with it as a community,” Farmer said as city officials prepared to make their first remarks. “The essence of the free public library has always been access. As New Haven’s being gentrified, folks are having a harder time—on top of budget cuts, teachers being laid off. There’s so many ways that we can build community. This cafe doesn’t do that.”

City officials defended the space, many breaking with their prepared remarks to address the protesters directly. In his introductory remarks, Harris drew a parallel between the NHFPL and historic Library of Alexandria, calling Ives Squared the next chapter of civic engagement and discovery for New Haven. Taking the mic to loud boos and chants of “Shame! Shame! Shame!” from one side of the room, Mayor Toni Harp quickly departed from her script, eyes locked on the 35 protesters who had entered, and were now held back by a loose web of police.

“This is the one place where everyone, no matter your income, can have access to technology,” she said. “You can have it here. I want to say that I am not ashamed of New Haven. We are the only city in the state of Connecticut that provides over a million dollars in our budget to serve the homeless. We are the only city. And so I am not ashamed of that.” 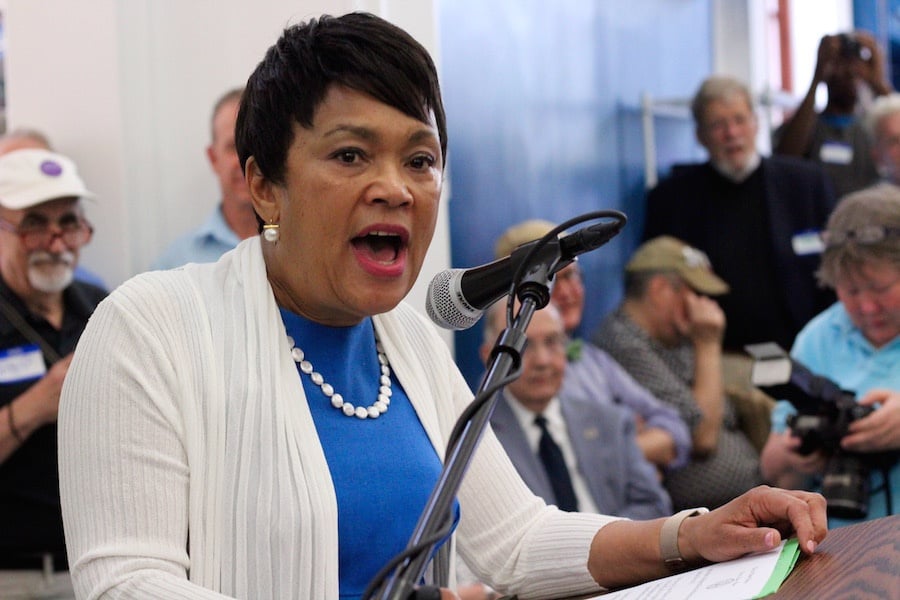 City Librarian Martha Brogan also addressed the group, greeting them as she approached the podium to cries of “People over profits! People over profits!” She heard them loud and clear, she assured protesters—and she respected their right to gather and voice their opinions.

“I would encourage you to think productively about how we might use this space to think about people who are experiencing houselessness,” she said. “They find a home in the library. But to work on houselessness, they can use our 3D printers, we can start building prototypes. You can laugh, but this in fact is happening in other countries…” 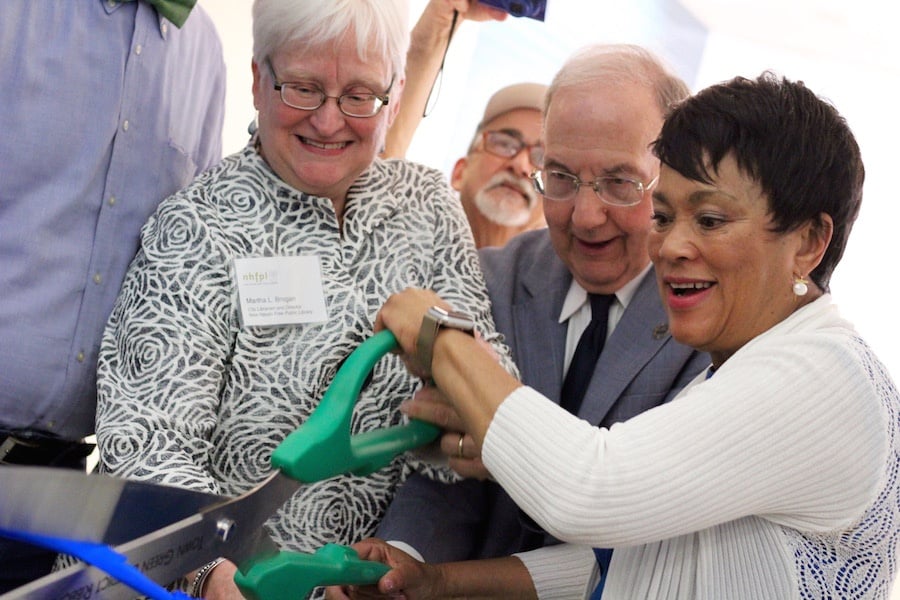 “They’re banned!” shouted Vanessa Suarez, alluding to a handful of "banned" patrons still outside the library, who were suspended for violating the library’s code of conduct. “Could you let those outside that are banned right now? Could you let them in?”

Brogan continued. “So come on New Haven,” she said. “Come and use our space.”

As city officials cut a massive blue ribbon, a different conversation had begun among protesters and police, not far from where the digital “switchboard” will soon be fully operational. Beside Chief Anthony Campbell, local activist Kerry Ellington asked why a report on Jerome Richardson’s violent assault and arrest on the New Haven Green had not yet been made publicly accessible. Campbell told her it was still under investigation (read more about that case and exchange in the New Haven Independent). 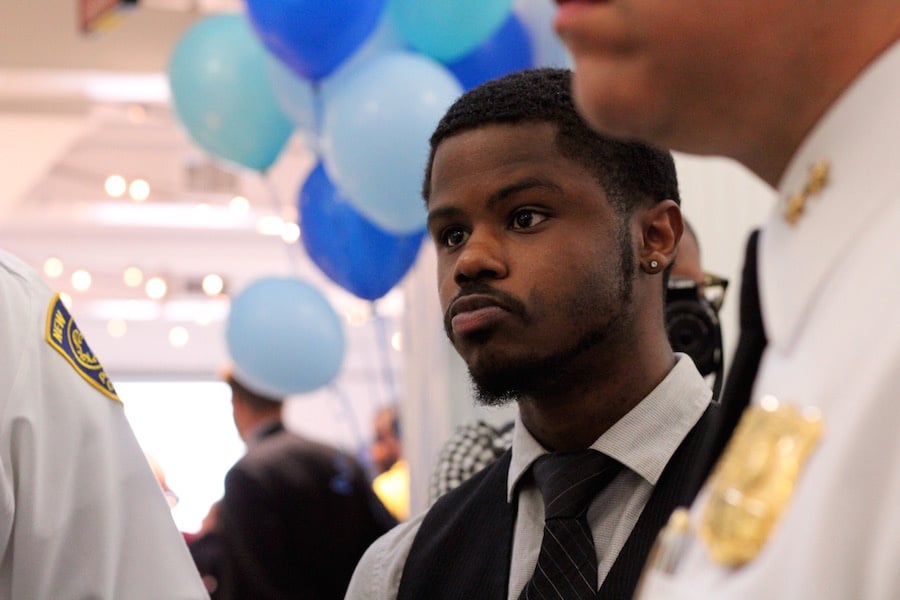 “The same thing that happened to me could happen to them,” said Richardson (pictured above). At Ellington’s urging, he turned his face toward the light to reveal a scar.  A few feet away, District One Manager Lt. Mark O’Neill was describing what the library’s code of conduct actually is. “This is a public library, but if somebody breaks the law, they can be asked to leave,” he said. “If there are numerous times, they will be suspended. They’re never banned forever.”

During a reception that followed the ribbon cutting, Brogan said the protesters had not come as a complete surprise. For months, the team working on Ives Squared had been hearing murmurs of discontent with the space, particularly the cafe. Then earlier this week, she said staff members saw a few posts suggesting a protest or action on social media.

“We’re one of the few public spaces where people are able to come and voice their opinions like that,” she said, adding that she is open to town hall-style meetings around the issue in the months to come. “And I consider this a community issue.”

Inside, so did visitors like Teila Chappel and Seth McDonald, friends who had heard about the space and decided to check it out. An aspiring restaurateur, Chappel said that she’d almost missed the opening because of her shift at B Natural Cafe. So when she got off, she headed straight for the library, and made a beeline for the space’s new button maker. 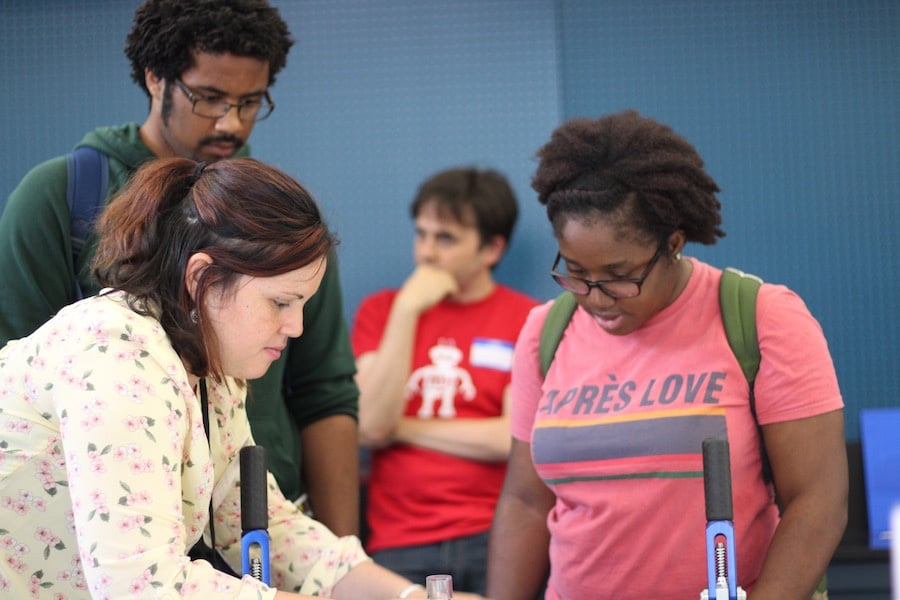 That was also true for Loria Jones, a self-described “Granny Nanny” who spends days looking after her young grandson while her daughter balances school and full-time work. Crouching over a “Bot Maze” with two downtown officers, she said that she’s excited to have the new space, and will be returning as often as she can.

“This is an awesome space,” she said. “The library is evolving with time—and trying to elevate the community.” She smiled a little, motioning over to Technology Librarian Kyle Litscher as he taught two cops how to use a 3D printer.

In the cafe serving small bites and desserts, Whole G Owner Andrea Corazzini said that he, too, is envisioning Ives Squared—cafe included—as a community space, and that he doesn’t plan on turning anyone away. 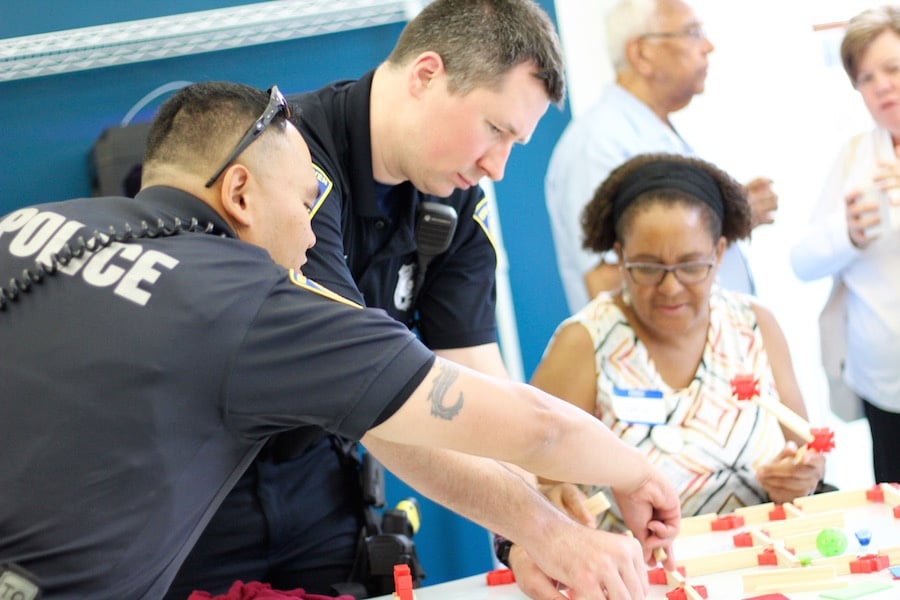 “If somebody is here and we have warm food, we’ll accommodate them,” he said. “New Haven is a town. You help people. What are we going to say? You can’t come in?”

But protesters weren’t swayed. Holding a sign after the protest, ULA member and cofounder Megan Fountain said she will believe the message when she sees it in action.

“I just want the library to be free,” she said. “I heard them talk a lot about innovation today. I’d like them to innovate no arrests, free housing and healthcare for all.”

Outside, suspended library patron Bealton Dumas held up a megaphone beside his wife.