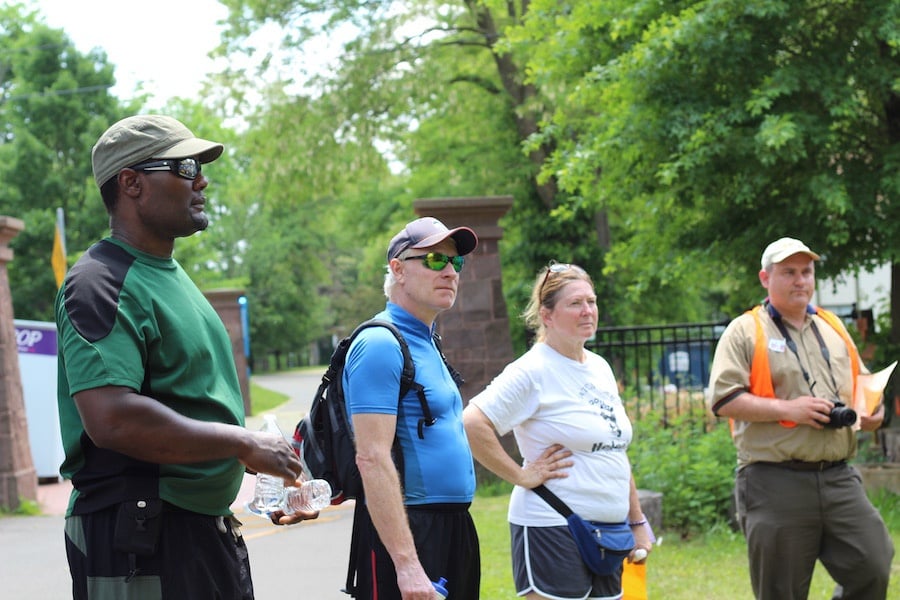 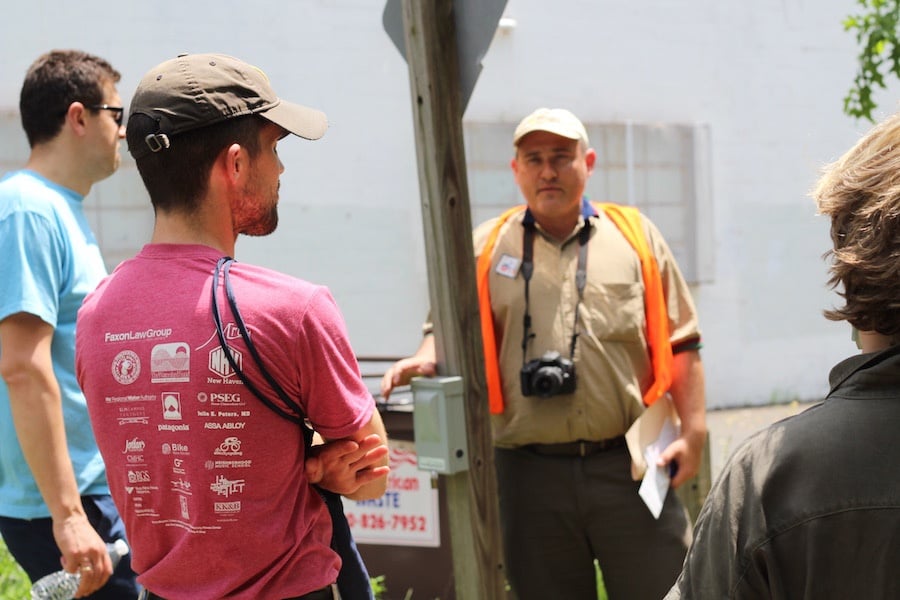 While both National Trails Day and its smaller Connecticut arm have taken place since 1993, this is the first year for the Newhallville Learning Corridor to participate in CT Trails Day. The event was sponsored by New Haven Friends of the Farmington Canal Greenway. Lucy Gellman Photos.

Newhallville’s section of the Farmington Canal Heritage Trail may not look like New York City’s High-Line yet—but it may start to if the community gets more runners, bikers, recreational walkers, and public artists on the path.

Saturday morning, that call for increased usage underscored the first CT Trails Day along the Newhallville Learning Corridor, where the Farmington Canal Heritage Trail intersects with Starr Street, Hazel Street, and Shelton Avenue. From morning to mid-afternoon, close to 40 walkers and bikers from across the region came out for the festivities, which included bike rides and guided tours of the area.

While both National Trails Day and its smaller Connecticut arm have taken place since 1993, this is the first year for the neighborhood to participate. The event was sponsored by New Haven Friends of the Farmington Canal Greenway. 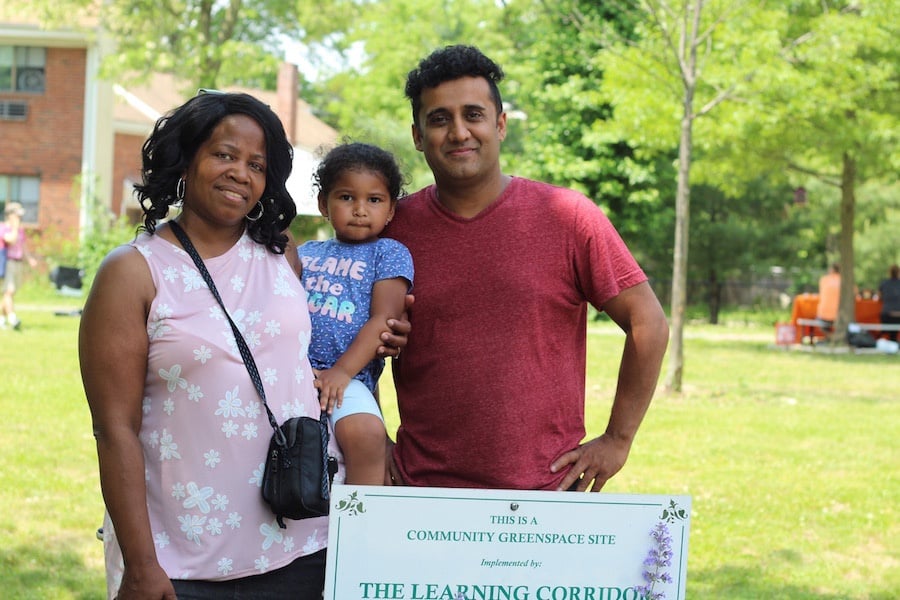 “This is to showcase the Learning Corridor to a diverse group,” said Community Placemaking and Engagement Network (CPEN) Founder Doreen Abubakar, who began coordinating the event months ago. By an hour into activities, she said she’d already noticed a new audience—a number of white people who’d come out to use the trail, and weren’t aware of the city’s bike share station at nearby Lincoln-Bassett School.

“I’ve seen a lot of people who would not otherwise know about the trail,” she said, mentioning a woman from Stratford who had never been to the site before. “It’s the connection that the learning corridor has.”

Walking around the area with her granddaughter Maddie, Abubakar said that she sees the area’s beautification efforts—a blooming pollinator garden and urban oasis with leafy green trees and bright, fragrant flowers—as one incentive to visit the trail. She’s careful to keep volunteers, walkers, and neighborhood kids away from the back of the oasis, where a spray of poison ivy has sprung up.

Could this be the next High Line? Aaron Goode lays out his case.

Like usage of the trail, she said the project has relied on collaboration and growing community support. Five years ago, she brought that approach to Imran Khan, owner of Cerda's Market on Shelton Avenue. She was starting her pollinator garden, and found that “you can’t have a garden without water.” There weren’t ant public pumps or fountains in the area. So she made a simple request: she would use water from Cerda's, and the market could charge her at the end of each month.

Khan never billed her for the water. Instead, he began asking what he could do to help, providing snacks and cool drinks to volunteers on days when their work stretched on for hours. He’s begun to talk to her about rehabbing the store, bringing more fresh produce into the neighborhood. The two plan to help each other make it happen, Abubakar said.

“More customers, more people in the neighborhood, more people on the trail,” Khan said, doing a quick tour of the pollinator garden before heading back into the market Saturday. 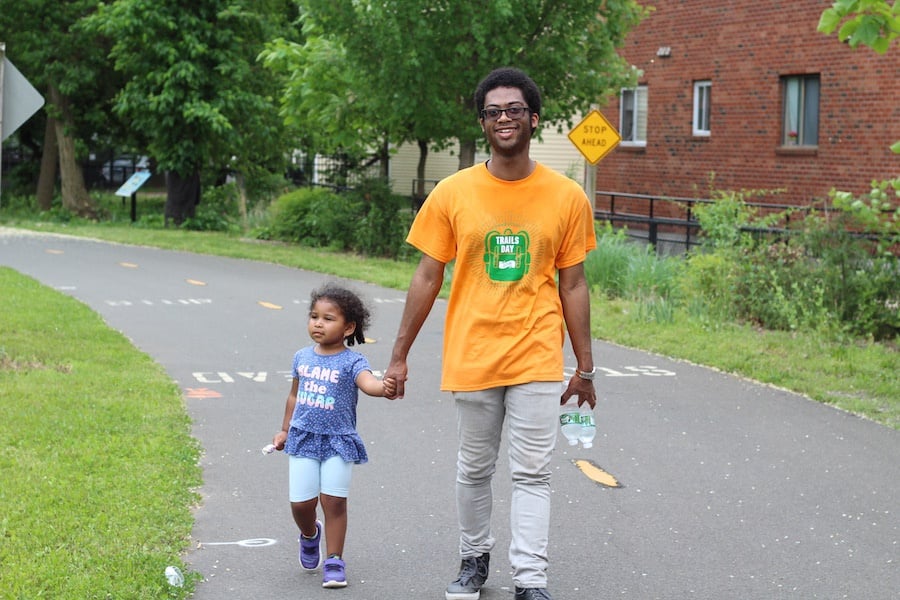 Trails Day volunteer Jonathan De Los Santos hangs out with Maddie. A resident of Shelton, he said he enjoyed getting to know the trail a little bit through his volunteer efforts, and would be back.

Back on Hazel Street, Friends of the Farmington Canal Greenway Founder Aaron Goode had gathered a small group to walk a section of the trail, heading from Hazel Street across Shelton Avenue, and toward Starr. Crossing the road carefully, he stopped by a small metal box that held an infrared sensor, placing one arm over the top.

As the group huddled in around him, Goode explained that the sensor is triggered by heat each time a body passes, as part of an ongoing effort to measure usage on the trail. In the past year, Goode said that the sensor has tracked about 100,000 uses, giving trail and nature advocates hard “trail census” data to advocate for snow removal, grass cutting, and maintenance efforts along the learning corridor.

He motioned onward, attendees gathering at Kwadwo Adae’s 2016 “Em City Footraces” mural. They took in the design: six brightly dressed, three-legged runners, sporting musical instruments, bright leggings, soccer jerseys and flowers as they run, the city’s skyline reaching upward in the background. In the just-recessed space behind them, brightly painted grasses and flowers sway, their centers emblazoned with the names of supporting organizations. 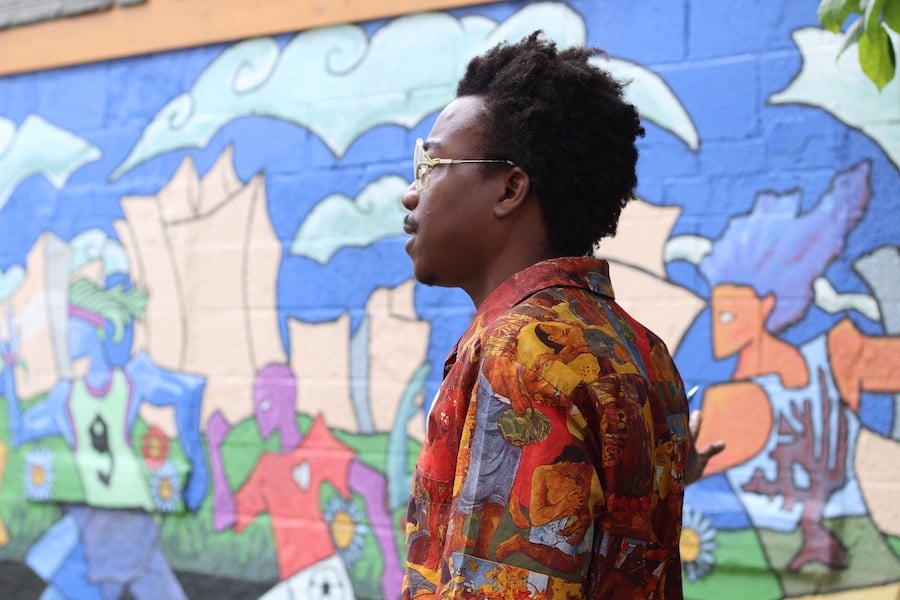 Kwadwo Adae:  “If I can bring enough people together, then they can be as emotionally invested in the artwork as I am. This is ours . Not mine.”

Adae stepped forward, motioning to the bright wall as he spoke. He recalled the joy of painting with trail enthusiasts and members of the neighborhood two summers ago, learning about Newhallville’s history as longtime residents and neighborhood youngsters pitched in. It’s a joy he said he intends to recreate this summer, as he embarks on a “Women’s Empowerment Mural” on Goodrich Street this June.

Attendee David Joyner, an avid cyclist and New Haven Bike Month advocate, cocked his head to the side just a little. “I like that they’re all different colors,” he said, motioning to the purple, orange, and blue skin of the mural’s runners. “It really stands for unity to me.”

“Unifying people to create something is what it’s about,” Adae said. His button-down, patterned with Paul Gauguin vignettes, flapped in the breeze. “If I can bring enough people together, then they can be as emotionally invested in the artwork as I am. This is ours. Not mine.”

Goode added that it’s part of a “holistic experience” that Friends of the Farmington Canal Greenway and the Farmington Canal-to-Rail Association are envisioning for users on the trail. Invoking New York City’s elevated High Line, he said that he wants to see both more use of the trail, and more art on its blank walls, buildings. and garages. 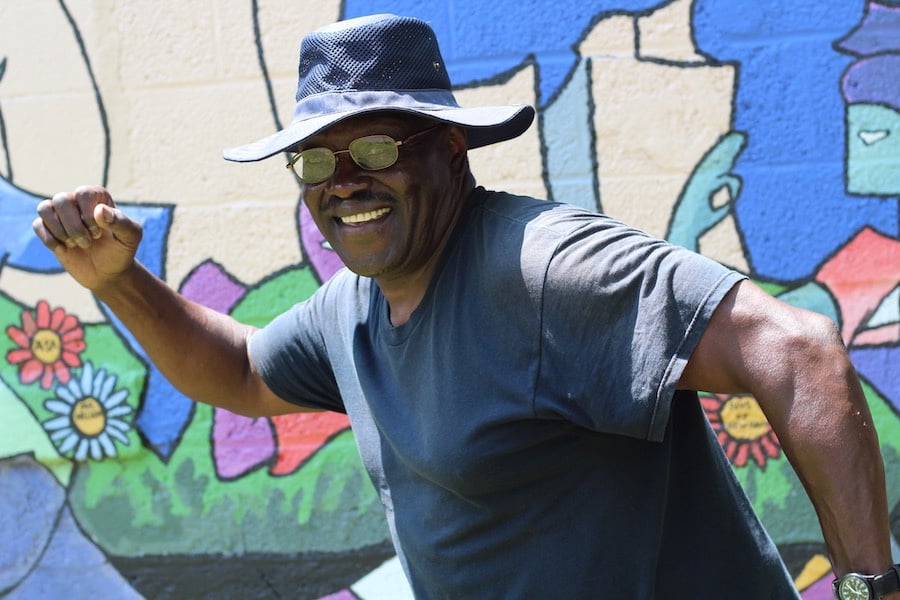 “From morning to night, I hear people on the trail” Calvin Nelson said. The Elm City Footraces mural is on the side of his garage. “I love it.”

From the adjacent house, Newhallvillian Calvin Nelson hooked around the side of the building, to see who was chatting at his garage. He embraced Adae, then struck a funny position, as if he was running with the runners.

“From morning to night, I hear people on the trail” he said, adding that he would like to see increased foot traffic. “I love it.”