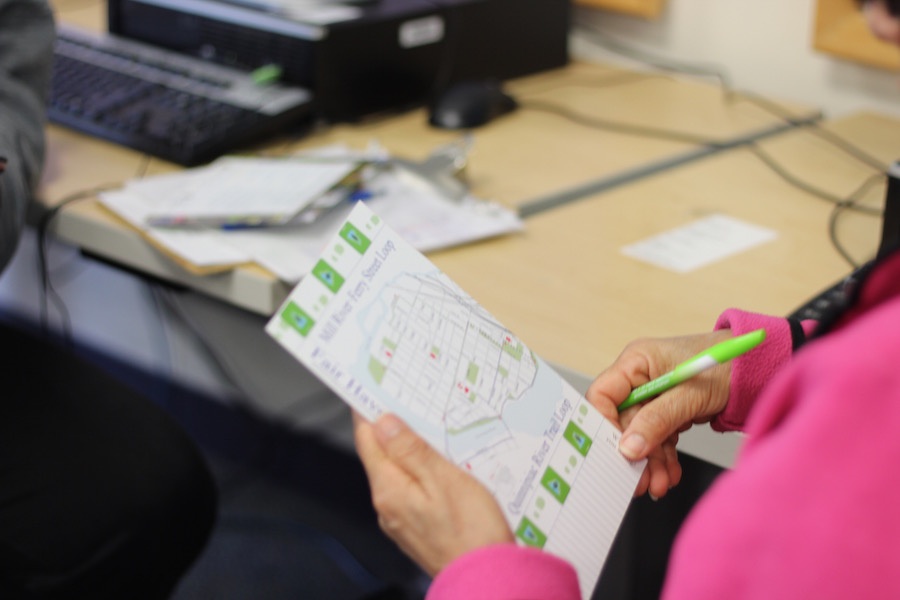 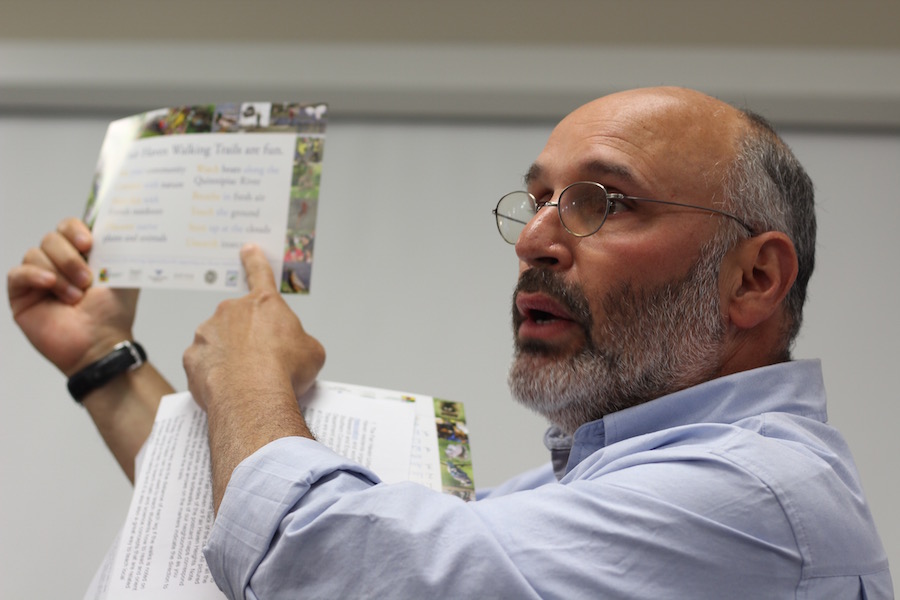 “You couldn’t get more Fair Haven if you paid for it,” Cruz said to a few chuckles from staff. “Which we did." Lucy Gellman Photo.

You’re a teacher in Fair Haven, looking for an outdoor activity for your students. There are a few ideas that you’ve collected, but there’s no master list, no place to find a walkable layout of the area. And without it, you just aren’t sure where to start.

The school is his first stop on a tour that will include Fair Haven schools, community management team meetings, health centers, and even stops with realtors selling property in Fair Haven. He said that the Chatham Square Neighborhood Association (CSNA) has printed 20,000 for distribution in the coming months, with another 500 that read "Fair Haven Walking Trails Are Fun" specifically for students. 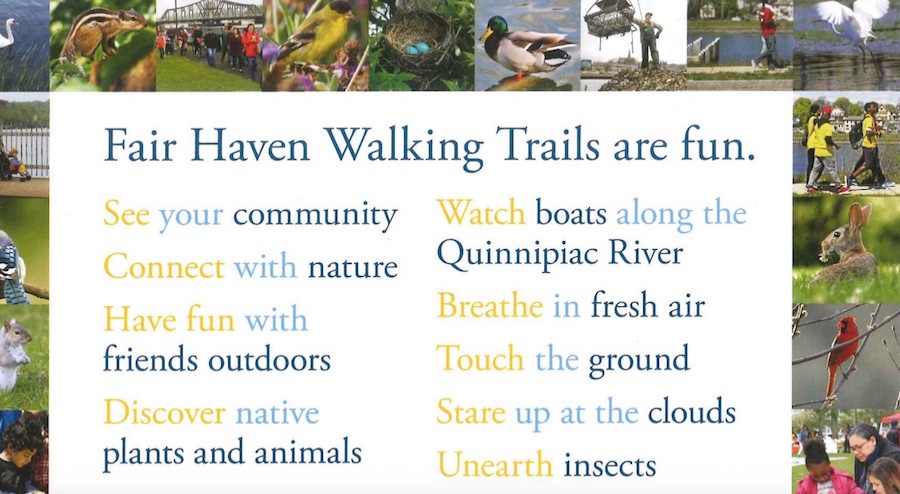 One of the postcards designed specifically for students, giving them suggestions for the trail. Courtesy CSNA.

A brainchild of the CSNA, Yale-New Haven Hospital, Mary Wade Home, Fair Haven Community Health Center, CARE New Haven, New Haven Department of Parks, Recreation, and Trees, and The Community Foundation for Greater New Haven, the card is part of a community-wide effort to get the neighborhood moving. It was conceived and designed earlier this year by Fair Haven resident and architect Kathleen Flynn, and printed at Phoenix Press on James Street.

“You couldn’t get more Fair Haven if you paid for it,” Cruz said to a few chuckles from staff. “Which we did.”

On one side, the card features a map with close to six miles of walking trails (5.8 miles is currently the official count). They reach around the neighborhood, criss-crossing it at the Mill and Quinnipiac Rivers, venturing into Criscuolo Park, and ambling down Ferry and Chapel Streets. In part, Cruz said, they’re segmented so kids can measure distances, like a two-and-a-half mile loop that hooks around Chapel, Ferry and Lombard Streets and John Murphy Drive.

As the trails span out across the map, six red stars denote the placement of actual, real-life trail markers that are graffiti-resistant, intended to last for 20 years at a time. Another set of blue-green squares and rectangles show walkers where to turn to stay on the trail. Next to the map, a “notes” section encourages students to write down the animals that they see along the trail.

“The more people we have walking in the neighborhood, the healthier we will be, and the safer we will be,” he added later in the presentation. “And the more ideas you think of to use this card, the more useful it will be.” 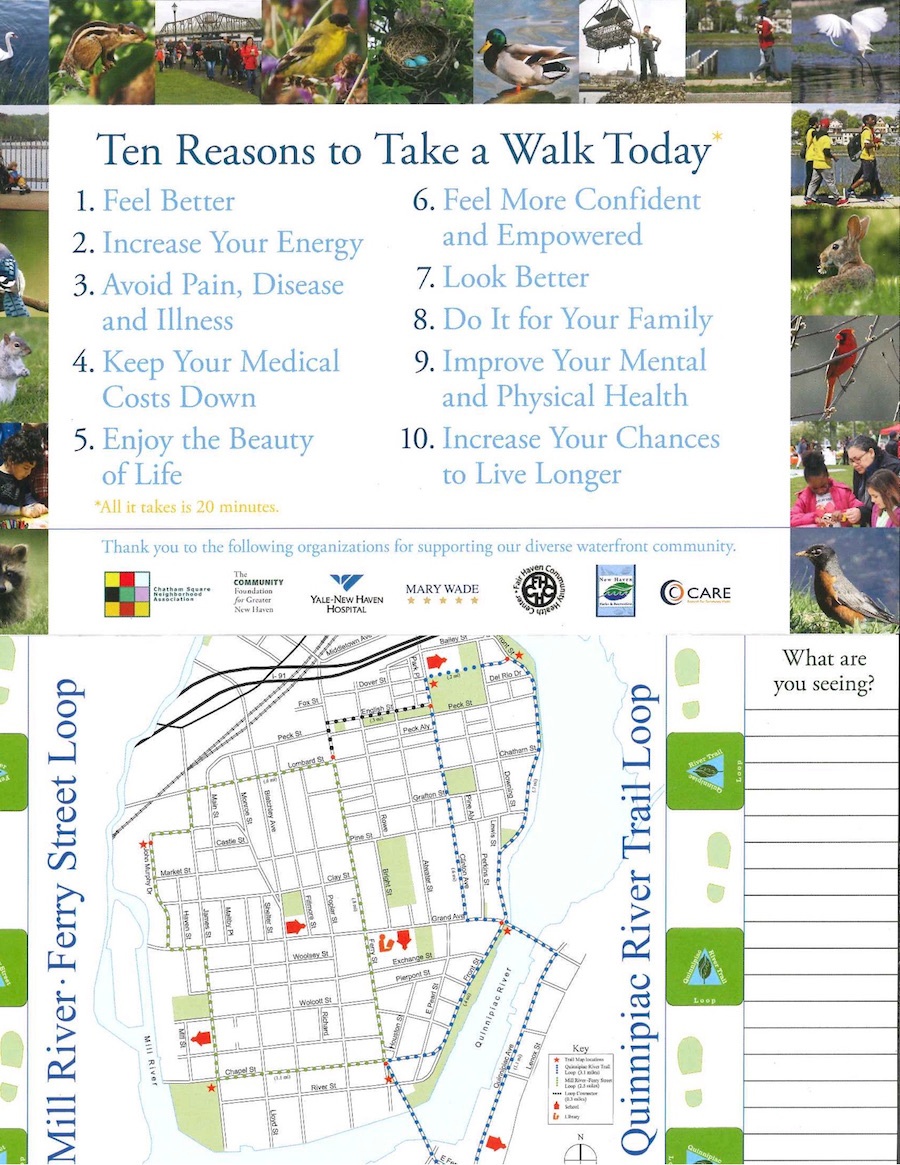 Cruz flipped the map to the other side, running his index finger around the perimeter. There, 19 thumbnail-sized photographs of animals peeked out, each forming one data point on a scavenger hunt. A raccoon here. A blue jay there. A fisherman with his nets a few faces away. Beneath them, a list read “Ten Reasons to Take A Walk Today.”

If students—and their families—use the trails, Cruz suggested that they’d have one other added benefit: picking up Fair Haven trivia. For instance, he asked teachers, did their students know how the neighborhood brought together the histories of George Washington, the Louisiana Purchase, and Black history around the Civil War? Or the importance of a statue on the far end of Criscuolo Park? What about the birds that frequented the Quinnipiac River in the spring, instead of in the fall?

“We thought about this a lot in terms of using it as an educational tool,” Cruz said. “There are probably 100 ways to use this card we haven’t heard of, and we would welcome hearing your ideas about how to use this.”

Teacher Julie Bacher said she’d already tried the walking map out with her students, who’d had a lot of fun scoping out the neighborhood and discovering its hidden gems. At the front of the room, Literacy Coach Irene Logan had a different proposal: would Cruz be willing to lead a few walks for students.