Murphy Holds The Line On SNAP 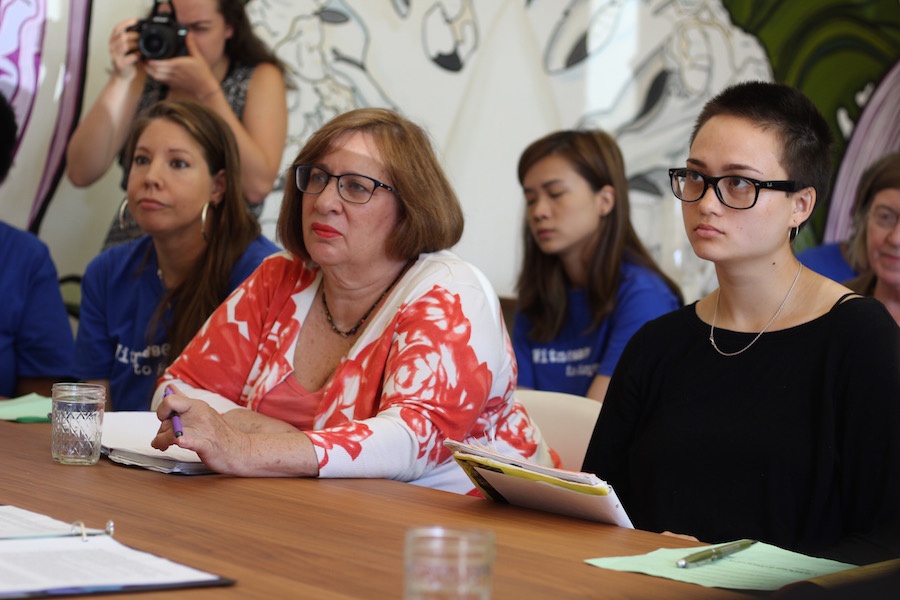 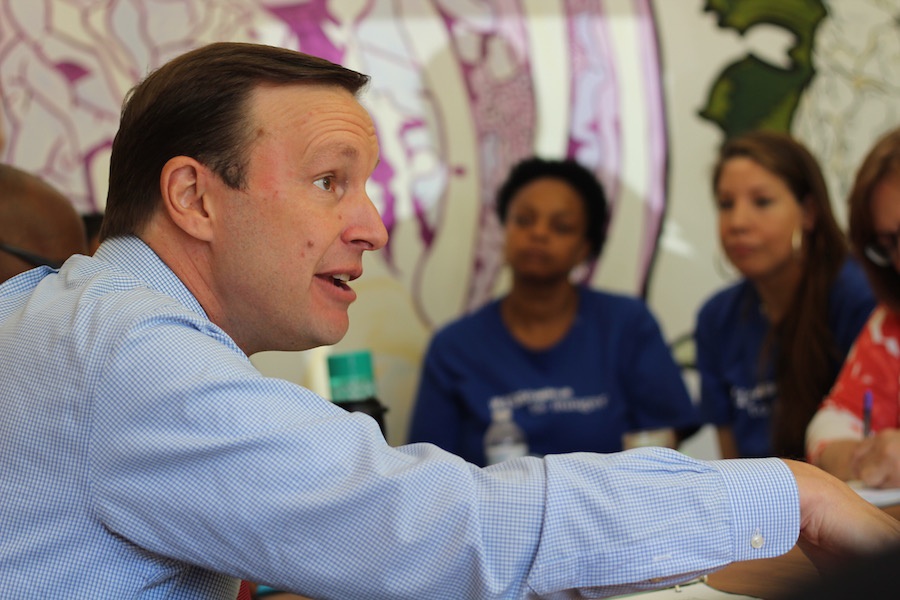 Chris Murphy: “We have a big fight ahead of us." Lucy Gellman Photos.

Show up to meetings, and tell people your stories about being hungry. Be active on social media. Spread awareness about food insecurity on Facebook, Twitter, and Snapchat. And keep protesting. Two million people risk losing their food stamps if Republicans don’t get the message.

U.S. Sen. Chris Murphy gave that advice to Kim Hart and members of Witnesses To Hunger Monday, as he stopped at CitySeed’s packed Grand Avenue offices to catch New Haveners up on the latest proposed versions of the U.S. House and Senate Farm Bills. Both, the contrast between which Murphy said “couldn’t be bigger, clearer, and more important,” passed by slim margins at the end of last month.

Fresh off his annual walk across Connecticut, Murphy said he wanted to reaffirm his support for Supplemental Nutrition Assistance Program (SNAP) benefits—more commonly referred to as food stamps or EBT—as he prepares for a fight to protect them in the Agricultural Improvement Act of 2018, also called the Farm Bill. In addition to Witnesses To Hunger, he addressed representatives from Focus Act Connect Everyday (F.A.C.E.) New Haven, Mothers for Justice, End Hunger CT, the Connecticut Food Bank, New Haven Food Policy Council, and New Haven’s Downtown Evening Soup Kitchen and Community Soup Kitchen.

Murphy’s visit comes at an already squeezed time for food security and SNAP assistance: 12.2 percent of Connecticut homes (that’s 437,530 people) are food insecure, according to the Connecticut Food Bank. That’s higher in cities like New Haven, where it’s reported at 22 percent. And it could get worse, the senator told attendees, if the House’s version of the Farm Bill advances instead of the Senate’s.

Attendees included Mothers for Justice Advocacy and Education Director Merryl Eaton (in pink and white sweater). Witnesses to Hunger Member Tammy Imre is on her left.

On June 28, the U.S. Senate passed its version of the Farm Bill, preparing to work with a divided House of Representatives that had passed its version by a two-vote margin just a week earlier after failing to do so in May. While Murphy told attendees that the Senate’s version of the bill is “just holding the line” on current, need-based nutrition assistance programs across the country, he warned that the House Bill penalizes poor citizens, with new nationwide work requirements for SNAP eligibility.

Under those new requirements, current and potential SNAP recipients would need to certify that they are working at least 20 hours a week every 30 days. There are only two exceptions to the work requirements: long-term federal disability, or raising a child under six years of age. If they are out of work after starting the program, recipients not only lose eligibility at that moment, but for an entire year.

“The people who voted for this bill in the house hate poor people so much that they decided to make you ineligible for food stamps for one to three years if you are out of work for a short period of time, and you are what they call an able-bodied adult,” he said. “That’s unfair. And it underscores just how unconscionable these provisions are.”

“We have a big fight ahead of us, and the danger is always that you end up somewhere in the middle,” he continued. “The place in the middle … is not good. It’s not good. And so we’ve gotta hold the line, and say that this if this bill gets watered down, it’s not good enough. And it shouldn’t be good enough for anybody that cares about nutrition, that cares about families in this country.” 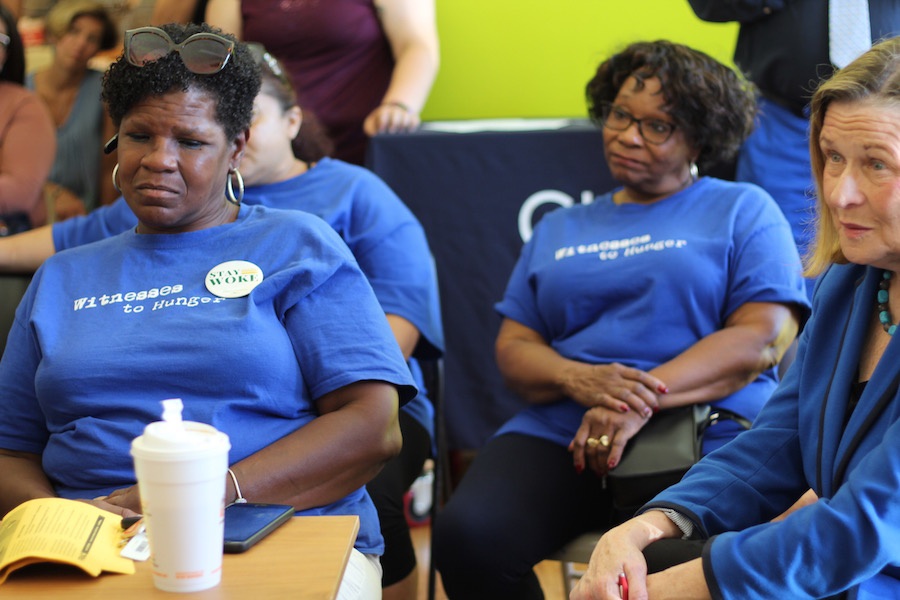 Hart, with other members of Witnesses to Hunger. "Do we have to go to Washington in our t-shirts?" she said.

He added that in the Senate Bill, there are “small but meaningful improvements” (view a more complete list of them here) to what is currently is in place. States would be allowed to do automatic SNAP certification for elderly and disabled households, allowing recipients to skip physically re-enrolling each year. Farmers could blanket enroll their products as SNAP eligible, a step they currently have to take market-by-market. And there are new provisions for retail food stores to offer incentives for buying fresh, healthy foods that comply with the Dietary Guidelines for Americans.

Those improvements—and continued SNAP support—are what Connecticut needs, said CitySeed Director Amelia Reese Masterson. Noting that “SNAP recipients are speaking out,” she said that in the last year, Connecticut farmers’ markets that take SNAP and EBT have seen $23,000 in revenue from recipients, meaning more families are using the program to buy and consume fresh produce.

Murphy greeted the news enthusiastically—but he also said that he recognizes the scale of the fight before him to get “a bill that looks like the Senate’s” as much as possible in the next 30 to 60 days. He recalled meeting a man (Tommy O’Neill, whose story you can read here) Sunday on the New Haven Green who was concerned not just for his own SNAP benefits, but for recipients living in more rural areas of the country, who don’t have access to the same social services that exist in New Haven.

He spoke about someone he’d met on the North End of Hartford, who ends one part time job at K.F.C. 2 a.m., begins another at a bakery 8 a.m., and still struggles to pay rent working between 60 and 70 hours a week. He recalled trying to live on a SNAP budget five years ago, and getting to know a kind of hunger that doesn’t go away. 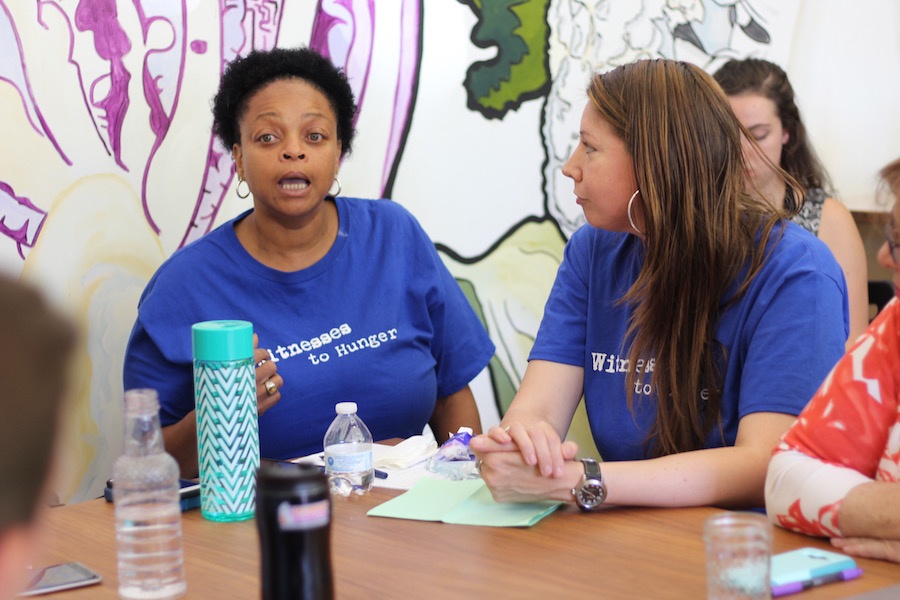 Melissa Driffin: “I’ve still got a red tape over me in my file that says ‘We don’t want her.’”

Other attendees had questions for Murphy. Piping up from her place at CitySeed’s long table, Witnesses To Hunger member Melissa Driffin asked Murphy: What if you can’t even get a job in the first place? She told the group that she has been looking for the past eight years, but is often bypassed because of a previous conviction and history of substance abuse. She said she feels as if “I’ve still got a red tape over me in my file that says ‘We don’t want her.’”

“You know, I went to college, I’m a leader in my community,” she said, tearing up as she spoke. “I have a 16-year old daughter at home and I live in affordable housing. However, I want better for my child. I want to give her an example that she can be proud of.”

Murphy listened intently, cutting it with “it’s alright, it’s alright” as she began to cry harder.

“This is what we have to tell people—that you are locking people into a place that they can never ever get out of,” he said. “All of these folks who have criminal records who have been handing in 10 applications a week and then getting rejected, they drop out of the work force. That’s what we’ve done to people over the years. And this bill continues to do it.”

The questions tumbled forward from members of the group. F.A.C.E. New Haven member Mark Griffin recalled talking to single mothers in the city’s Dwight neighborhood who aren’t able to feed their families on the WIC benefits that they have. Artist Do Walker wanted to know what would happen to those who found themselves in a state of temporary unemployment, suddenly unable to qualify for benefits. Mother and Witnesses to Hunger member Bridgett Williamson recalled doing everything she could to get out of a system of poverty—only to find that her Yale job still didn’t cover rent, medication and food at the end of the month. 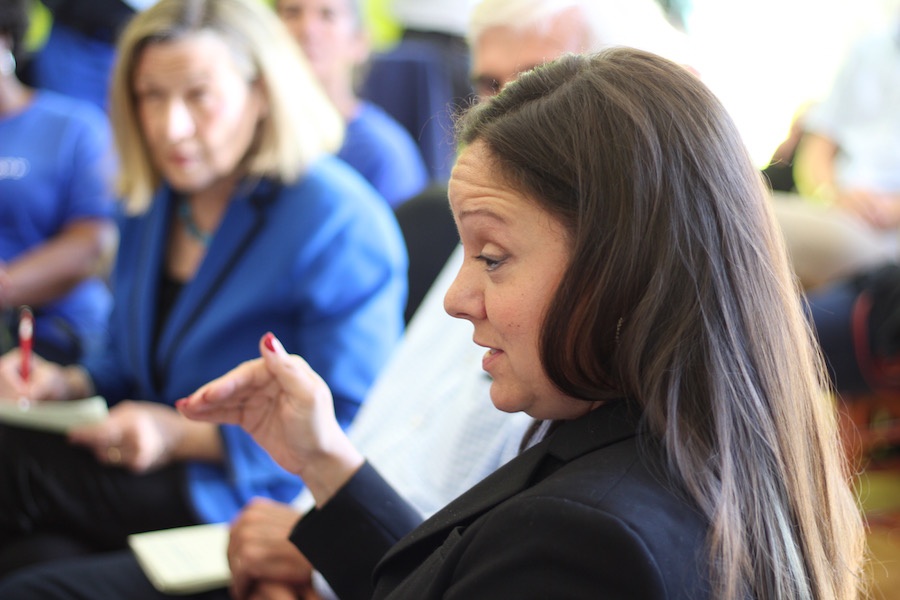 In her blue “Witnesses To Hunger” t-shirt, Hart raised her hand from one end of a long table. She noted a rally on the New Haven Green last week, which had spilled into Murphy’s walk on Sunday and brought 13 members to CitySeed Monday.

“Do we have to go to Washington D.C. in our t-shirts?” she added to laughs from the group.

“Sometimes people in Connecticut wish they lived in Maine or Kentucky … somewhere where you had somebody who disagreed with you. I think you just need to keep doing what you’re doing. Because it allows us—me and Rosa [DeLauro] and Dick [Blumenthal] to come back to Washington and say: Le me tell you somebody’s story. Let me tell you how activated people are about this.”

“I want to make sure that the delegation understands that we are not going to accept middle grounds,” he added. “We need the Senate bill in order for our votes to be attached to this.”