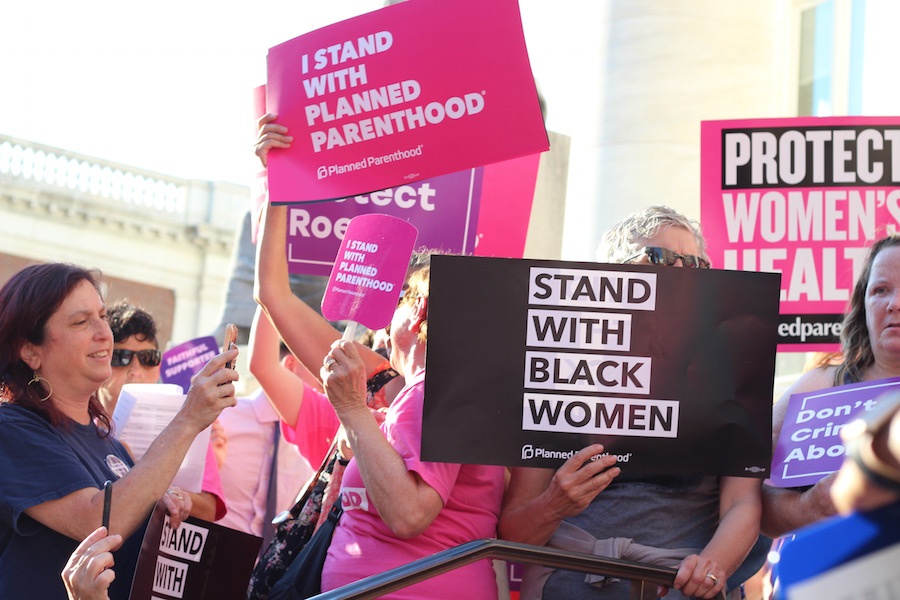 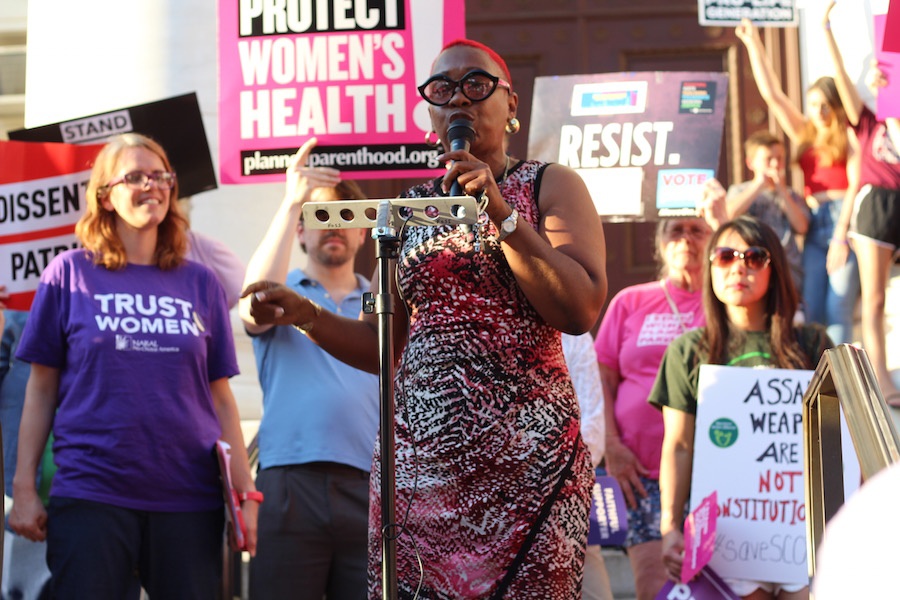 One woman turned out because political fear is keeping her up at night. Another made sure to talk to her 7-year-old son about the reasons one might end a pregnancy. A third could remember a time when abortion was illegal in her home state—and friends and relatives were dying because of it.

Tuesday evening, 100 advocates of reproductive healthcare, immigrant rights and racial justice gathered on the steps of New Haven’s Elm Street courthouse to rally against President Donald Trump’s nomination of Brett Kavanaugh to the Supreme Court of the United States, announced Monday in the wake of Justice Anthony Kennedy's retirement. Organized by NARAL Pro-Choice Connecticut with Planned Parenthood of Southern Connecticut (PPSNE), the New Haven Pride Center (NHPC), CTCORE-Organize Now!, Women’s March CT and nine other organizations, the rally marked the local chapter of a national action to protest the nomination and #SaveSCOTUS. 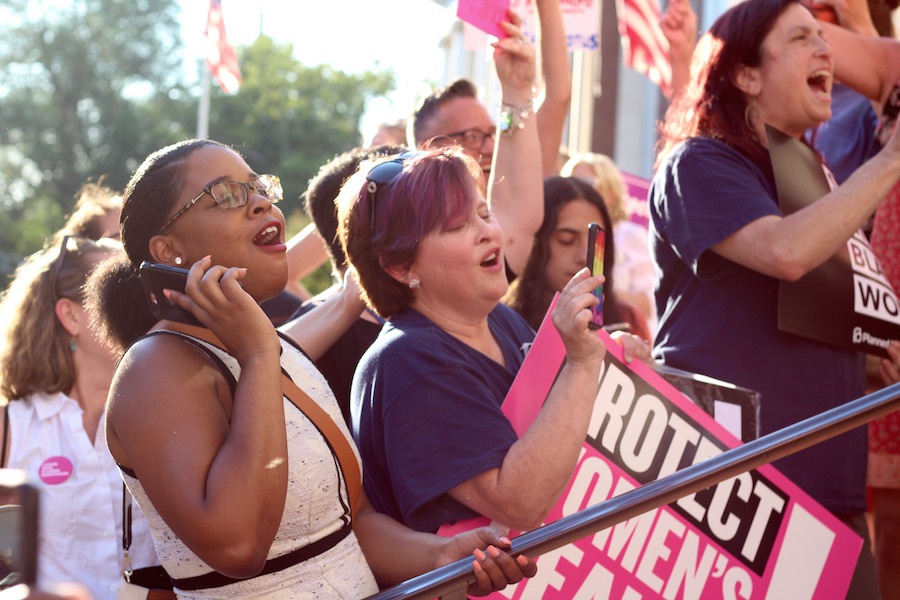 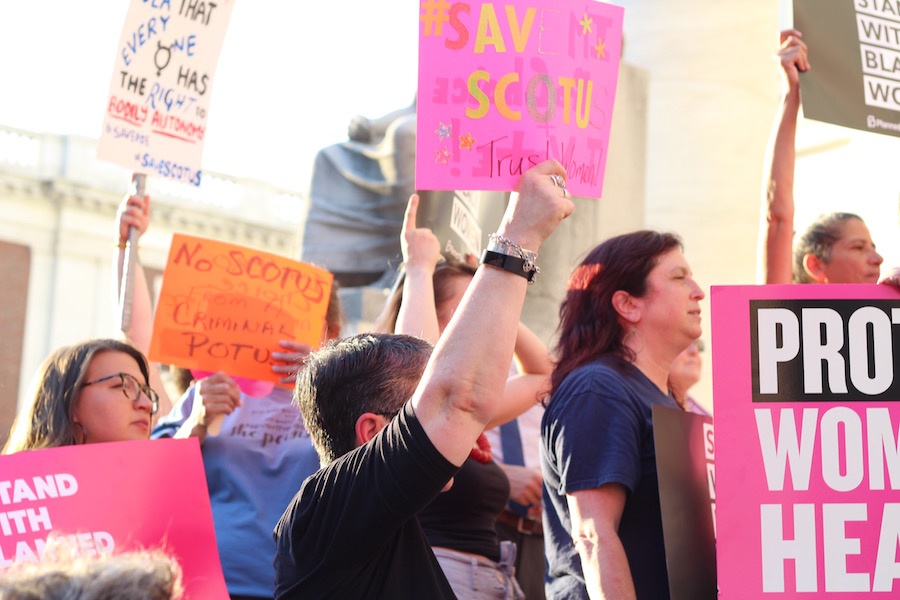 Both nationwide and local opponents of the nomination have said that Kavanaugh’s appointment could result in the reversal of 1973’s Roe v. Wade decision that legalized abortion across the country, effectively outlawing it in states that vote to close their clinics. In addition, they have said that the appointment stands to undo Kennedy's rulings on same-sex marriage and LGBTQ+ rights, and roll back rights for immigrants, people of color, and organized labor.

In addition to reproductive healthcare, speakers took the mic on immigrant rights, racial justice, gun legislation, and organized labor—all constitutional freedoms that they said could be rolled back under Kavanaugh’s watch.

Raising their voices over a handful of counter protesters who yelled “But what about the babies’ rights?” a packed lineup of speakers urged attendees to call their legislators, speak out with their own stories, and fight the Kavanaugh nomination as hard as possible in the coming weeks. Among representatives of NARAL Pro-Choice, CAIR-CT, PPSNE and others, several reproductive healthcare providers spoke out on behalf of their patients.

“Abortion is medical care,” said Dr. Aileen Gariepy, a specialist in reproductive health and family planning at Yale-New Haven Hospital. “Because women deserve care. And this medical care has been protected for the last 45 years by the Supreme Court of the United States. And even though it has been chipped away and chipped away, that right is still there, and it is now at risk.”

Between comments, speakers led the crowd in chants of “We trust women! We trust women!” and “When abortion rights are under attack, what do we do?/Stand up fight back!” they advocated for an intersectional approach, where advocates of one cause hold the line on a constellation of like causes.

In the crowd, attendees—mostly women, but also a handful of men and young kids—lifted handmade signs, bright posterboards and pink, purple and black posters from PPSNE over their heads. The steps transformed into a sea of bobbing pink bodies, punctuated by signs reading “Stand With Black Women” and “Faithful Supporter.” Here are some of their stories. 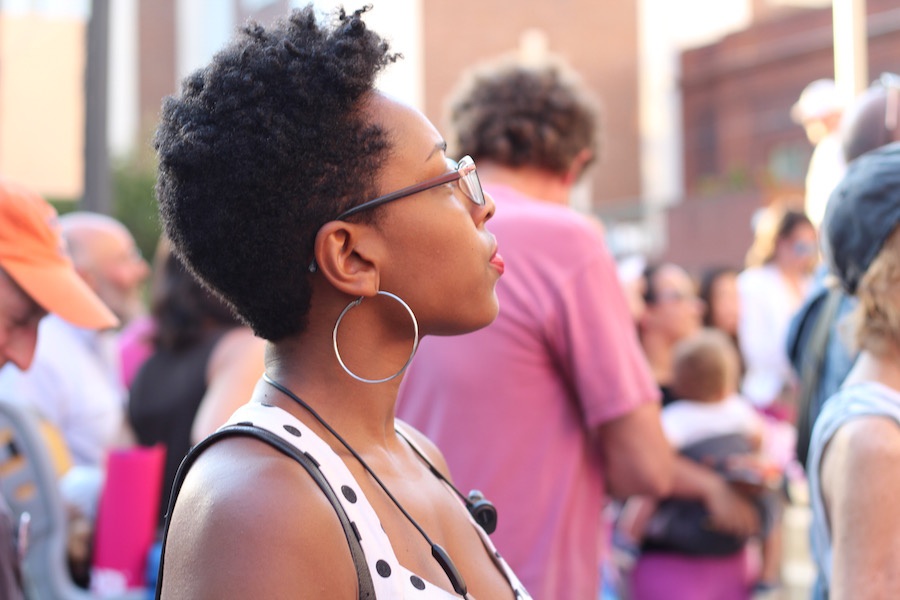 Tysha Vulcain, 23, Educator at the National Academy of Advanced Teacher Education. She was in New Haven for work, and stopped by the rally before heading back to New York.

The same way you can’t sleep at night—I can’t sleep because my life and my body is in fear, all the time. That’s how I feel kind of on the day in and day out. And it’s impossible not to feel that way when politics are not built for me and the people who are in congress and making the decisions don’t look like me.

I went to Mount Holyoke College, which is a historically all-women institution. So a lot of our values have to with women’s rights, and the ability to have control over your own body. It’s irritating that most people in congress are men, white men, and yet they’re making all the decisions about something that has nothing to do with them. When you’re in environments that are so built on being strong for marginalized identities—and I’m talking about queer students, women, the whole spectrum … that’s when you realize how much your voice has to matter in situations like this. 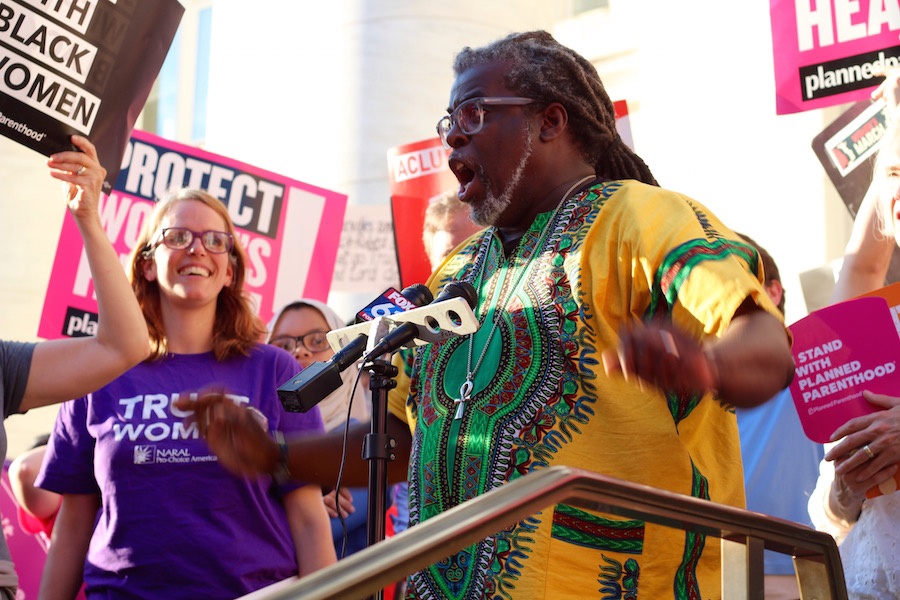 First off, I am a due. So I’m limited in what I should be saying. What I am clear about in this moment, that even when others would voice their side, we already won. We already won So now what we have to do is stand clear. Stand clear, and be resolved. What is happening now has happened before. Right? So therefore, it’s up to us not to be moved by the moment, but to be moved with the spirit of the movement.

The movement is clear. Women have the right to do whatever they think is right for themselves. And I am one voice of God that says it very clearly. I have no other responsibility than to come alongside women and to claim with them, they have their right to choose. It doesn’t really matter what the Supreme Court has to say in this moment, I think we gonna hold the line. And I’m gonna work with other faith leaders across this country and in this state to ensure that we hold the line with Roe v. Wade. 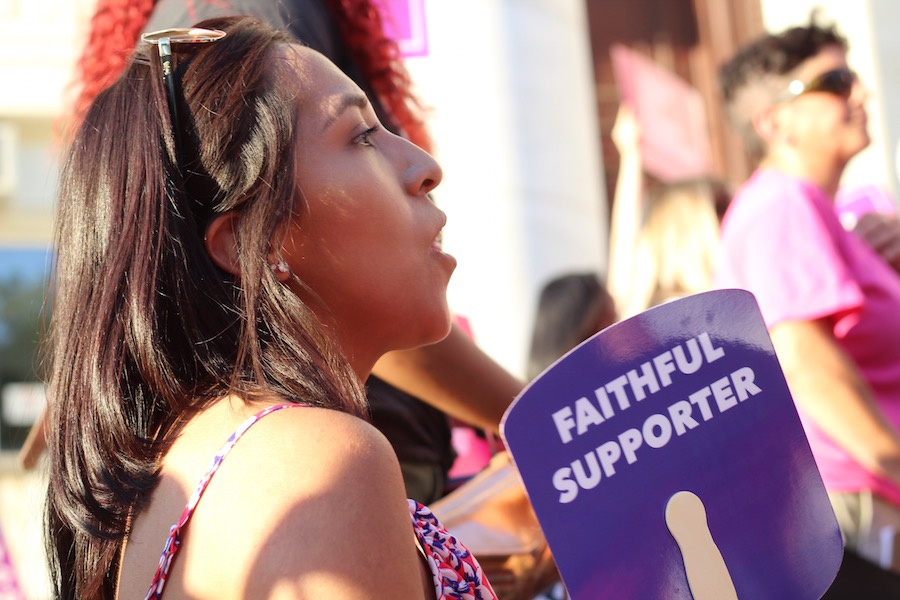 We shouldn’t have to be here fighting for this. Roe v. Wade should already be safe. It’s frustrating that we have to continue to fight for this. You know, Row v. Wade is not just an issue affecting women’s rights, but also immigrant rights too. Undocumented immigrants already don’t have access to health care, and Planed Parenthood has funding to be able to further help undocumented immigrants have access to birth control and all the other sort of stuff.

I just feel like the world is trying to take us backwards. My birthday is April 3 [1973]—it’s right in the timing [after Roe v. Wade was passed]. I was talking to my mom about that. Like, what were you thinking? Were you thinking you didn’t have a choice? Was I born because you didn’t have a choice?  It’s interesting, the year that I was born. And how significant it is to me, personally.

I just want to support African-Americans and Latinos, the Latinx community. I want to support the gay community, the transgender community. This nomination is really just taking us back to slavery. That’s really what I feel like. I feel like there’s already such a divide that’s happening that this nomination is just putting the nail in the coffin for all people who are minorities in this country, not just  for African-Americans and Latinos, but for everyone. 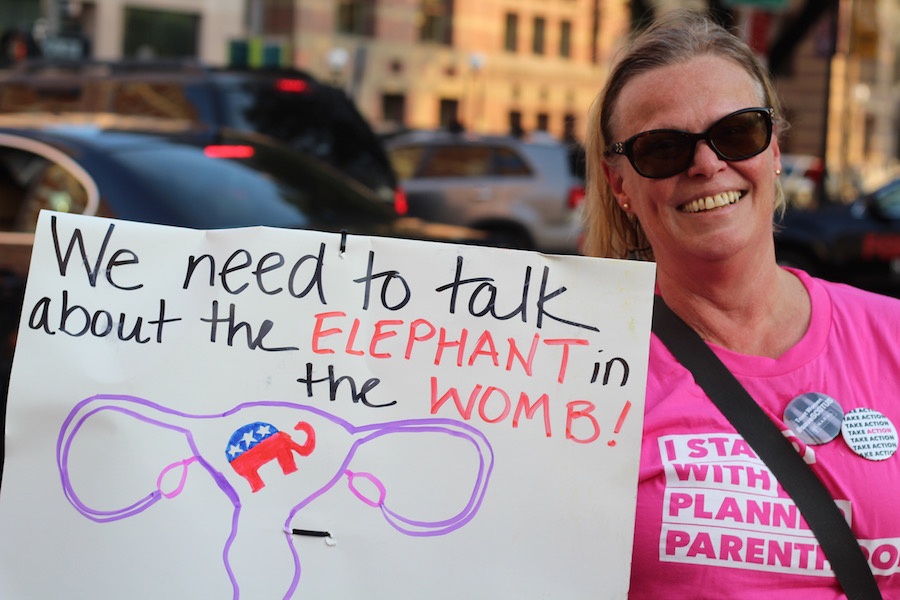 I graduated from high school the year before it [Roe v. Wade] passed. So I knew girls in high school who went to the Berlin Turnpike and had illegal abortions. I knew that they couldn’t have children afterwards. I didn’t know anyone, fortunately, who died. But I have been talking about this for years.

Particularly when I held up this “Elephant in the Womb” sign and the hanger, people came up to me and said “Oh. My aunt died. My cousin died. Another friend was seriously injured.”

Some of the girls protesting this are so young. They didn’t grow up knowing that that was the reality. And they don’t know what it’s like to be forced with a decision that you will take … go have something illegal and have substandard healthcare. This is outlawing abortion. It’s not going to end abortion. It’s going to end safe abortion. If you don’t have that in context, you don’t know what that means. It’s a horrible, horrible thing for women.

[Republican U.S. Sen.] Susan Collins said she believes that the Republican party stands for personal responsibility and individual choice. Now, how do they do that and then shove illegal abortion down your throat? How does that leave you with individual choice? How do libertarians feel that they don’t want government in your business until it’s in your uterus? 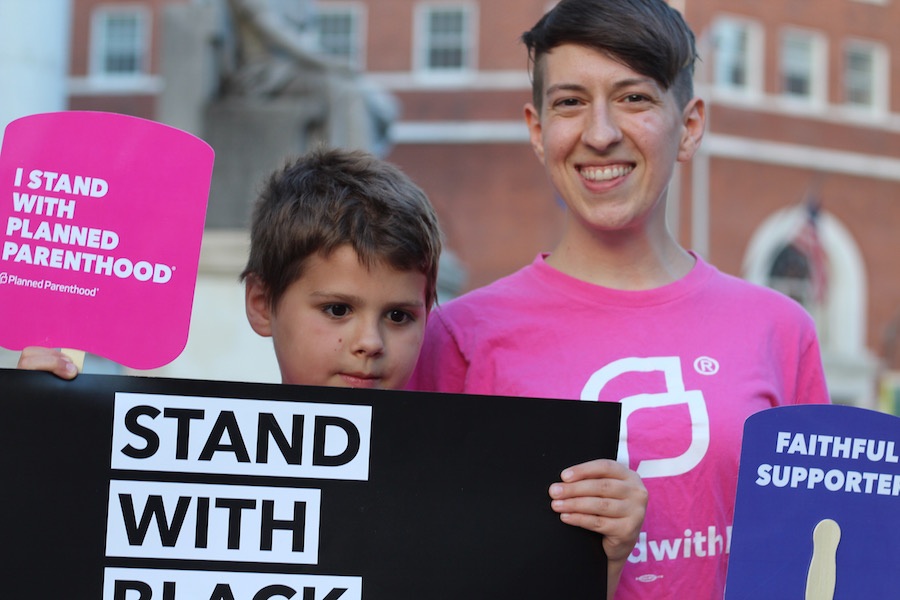 Terry and Logan Roberts, 31 and 7, Organizer for PPSNE and Son

Terry: It’s important to me that we have those rights and expand those rights, rather than taking them away. The idea that Roe could be overturned is just horrifying.

Logan: People should be able to make their own choices about being pregnant and not being pregnant. But the president, Mr. Trump … how should I put this? He’s really moved around the system.

This is an installment in our "Vox Populi" series, in which we report out the voices that make our cultural and creative ecosystem what it is. If you have ideas for the series, reach out to lucy@newhavenarts.org. To watch the full video from the event, click below.