Puerto Ricans Fête An Artist Of Their Own 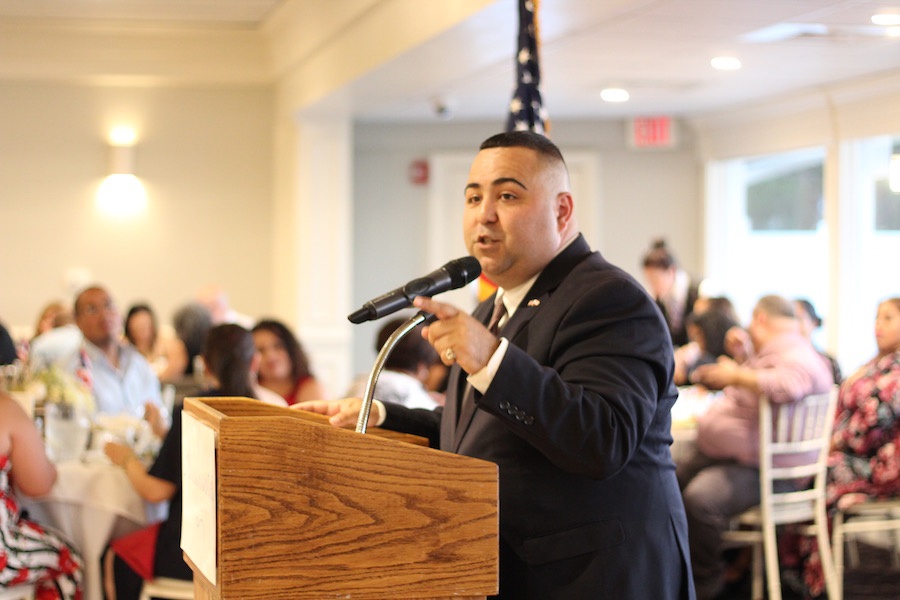 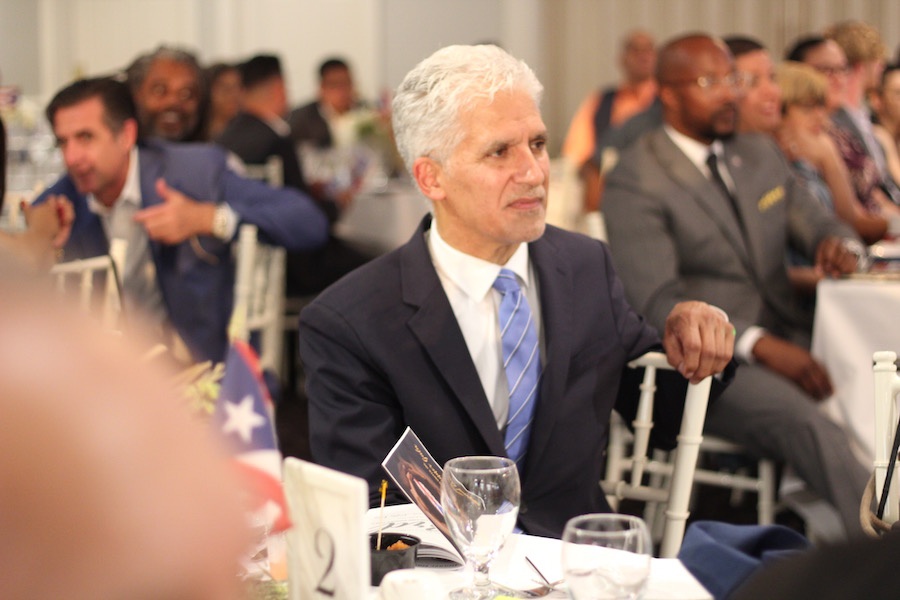 "One of those silent heroes." Lucy Gellman Photos.

A New Haven artist, educator, and cultural hero is once more getting his due—this time for giving back to the community he came from.

That artist is David Sepulveda, a 66-year-old retired art teacher, reporter, and serial volunteer for several of New Haven’s cultural institutions. Thursday night, he was one of three honored at Puerto Rican United Inc.’s third annual dinner gala, a fundraiser and awards ceremony for the organization. Over 200 gathered for the event, held at Amarante’s Sea Cliff in Morris Cove. The crowd included local and state elected officials, U.S. Rep. Rosa DeLauro, and a brief stopover from gubernatorial candidate Ned Lamont.

“This year is unique because of all that’s happening in our community,” said PRU President and co-founder Joseph Rodriguez during a cocktail hour, looking out over a serene Long Island Sound. “Both on the island of Puerto Rico as well as in communities across Connecticut.”

Joseph Rodriguez: “My goal is that we celebrate our rich culture, all while understanding that the fight is not over."

He added that PRU saw the evening as a chance to both reflect on New Haven’s vibrant Puerto Rican community, and identify the help that the island still needs after Hurricane Maria devastated it last September, killing thousands and prompting mass evacuations in its wake. In the 10 months since, Connecticut has resettled between 13,000 and 15,000 of those evacuees.

“My goal is that we celebrate our rich culture, all while understanding that the fight is not over,” he said. “So if I can get folks to get out here and enjoy our rich culture with their family—great. But even better, if I can get them to come out here and join us in an effort to fight for Puerto Rico … you can define it however you want, but we cannot sit and fight for the island.”

He referenced Zayas’ involvement in New Haven for Puerto Rico, a collaboration with Arte, Inc. that raised over $130,000 for relief efforts, and resulted in four trips to the island. He praised Junta for its role as a relief center.

Then he added that Sepulveda is a unique case—“one of those silent heroes” that has amplified New Haven’s Puerto Rican community through his reporting for the New Haven Independent, and turned his painting skills into cultural advocacy each year, as he designs and paints the backdrop for the annual Festival Puertorriqueño de New Haven, now in its third year. 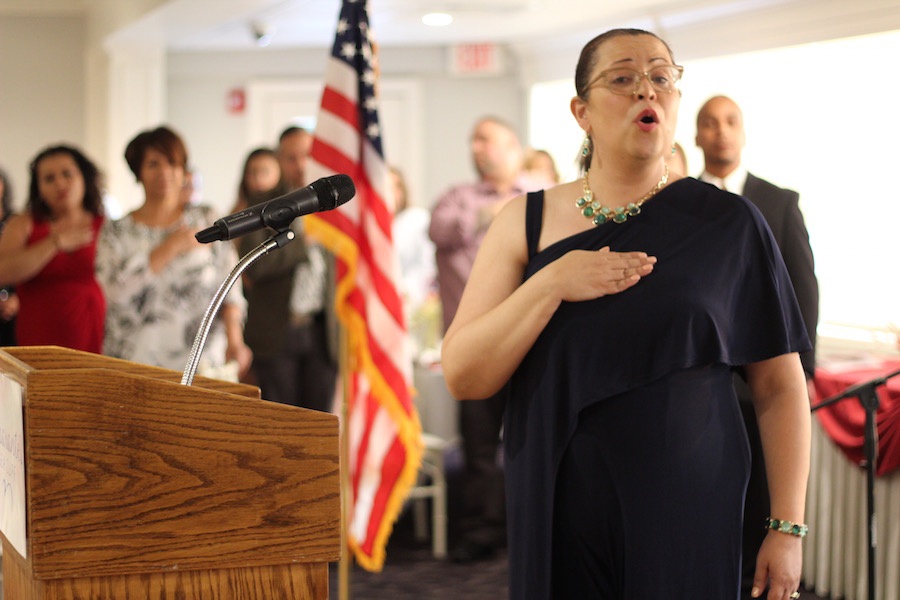 But Sepulveda’s eye towards the visual arts goes way back, to the New Haven of his youth. Born and raised on the west side of the city, Sepulveda learned to share things early, the second oldest of five brothers. His parents Irma and Victor, to whom he dedicated Thursday’s award, both left Puerto Rico in the 1940s, during a wave of migration that followed the Second World War. Spanish was his first language, English his second.

The family was, by his own estimation, “fairly poor.” Sepulveda spent the first several years of his life in the Rockview and Brookside public housing projects, which have since been demolished and rebuilt. He and his brothers didn’t ask for expensive things. But when Sepulveda was 13, he found himself taken with the idea of studying at the Famous Artists School in Westport, Conn. There was only one problem: a single course was $500, a small fortune for the family of seven.

“I don’t know how my parents scraped together the money,” he said—but they did. Sepulveda doubled down on his practice, careful to bring the school’s books with him as he learned.

It paid off. Even before he’d finished middle school at Mauro Sheridan, Sepulveda had started selling paintings to the neighborhood. “It wasn’t like a steady thing,” he joked. “I was just learning the craft.” 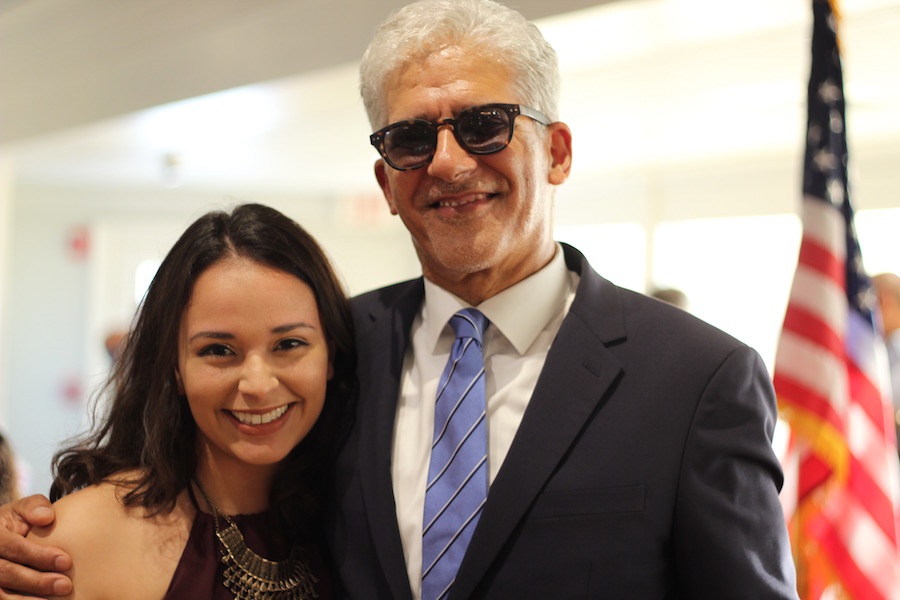 Sepulveda with his daughter, Kara. When asked if she too caught the art bug, she gave an enthusiastic "oh, no." Instead, she is studying public health.

He continued to study visual arts at Hillhouse High School, and then at Southern Connecticut State University, where he ultimately declared a major in art education. At the time—“a pivotal moment” during college orientation, he said—he realized that art education was more likely to land him a job.

He was right.  By the time he graduated, he had a job offer from the Stamford Public Schools (SPS), a sunlit room at Cloonan Middle School with a view of a river, his own kiln, and “a lot of autonomy.” It became Sepulveda’s first and last job: he stayed at Cloonan, teaching thousands of visual art students, for 36 years.

“It’s always the kids,” he said when asked his favorite part of the job, getting a little choked up. “Seeing the kids grow and succeed. With social media now, I get letters from students all the time, saying these wonderful things. It’s always gratifying to see that they themselves have made the leap into the arts—whether as graphic designers or full-time painters, artists, whatever.”

“Just instilling in the students the sense that they can become an artist, that they can achieve,” he added. “A lot of them didn’t know that they had that skill. And it’s wonderful when they find it. It makes all the difference.” 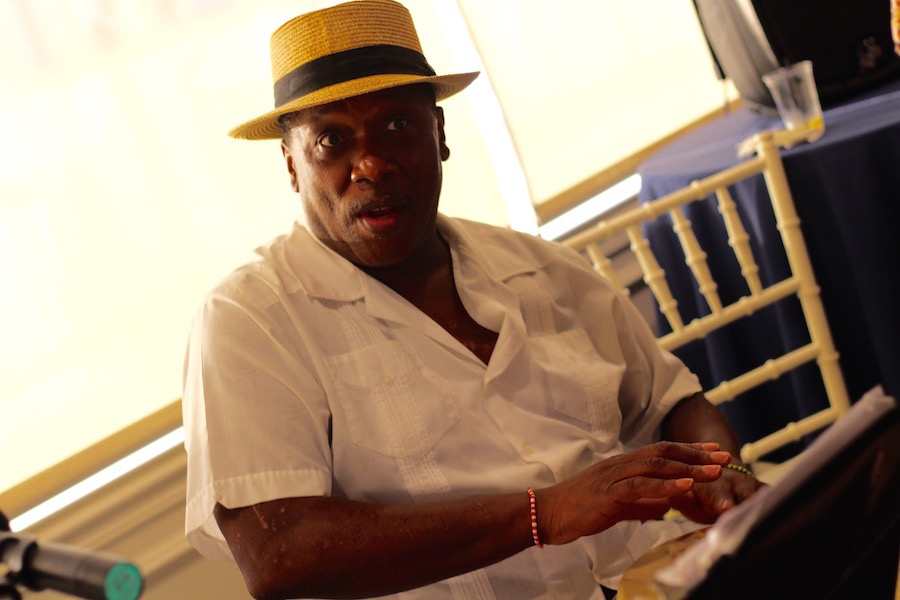 As Sepulveda taught, he honed his own practice at a new home in New Haven’s Westville neighborhood, becoming a husband and father, then leader in the community. He found himself drawn in by  “the contagious nature of volunteerism,” teaching art classes in mobile-making and wire figures at Westville’s early Artwalk celebrations. The arts, he realized, doubled as a creative and economic engine that needed help—a point he said he's continued to drive home whenever he speaks about arts education.

He learned about other artists who needed a hand—Sharece Sellem, who led him to Bregamos Community Theater—and jumped in with his paintbrush. That list has since grown: set design and painting for Collective Consciousness Theatre, PRU's Festival Puertorriqueño, Junta for Progressive Action, and most recently Toto Kisaku’s Requiem for an Electric Chair.

Artspace Director Helen Kauder recalled meeting Sepulveda in 2010, when he offered to become a tour guide for the annual City-Wide Open Studios. There was a bus shuttling attendees around the city. Sepulveda hopped on to let them know where they were going—and changed their entire outlook on the city.

“He knew everything,” she said. “Wherever the bus went, he had stories to share, and he regaled people on the bus, most of whom had come from outside of New Haven. He was so charming, and that just represents everything about him. So much joy. So much love. So much art appreciation.” 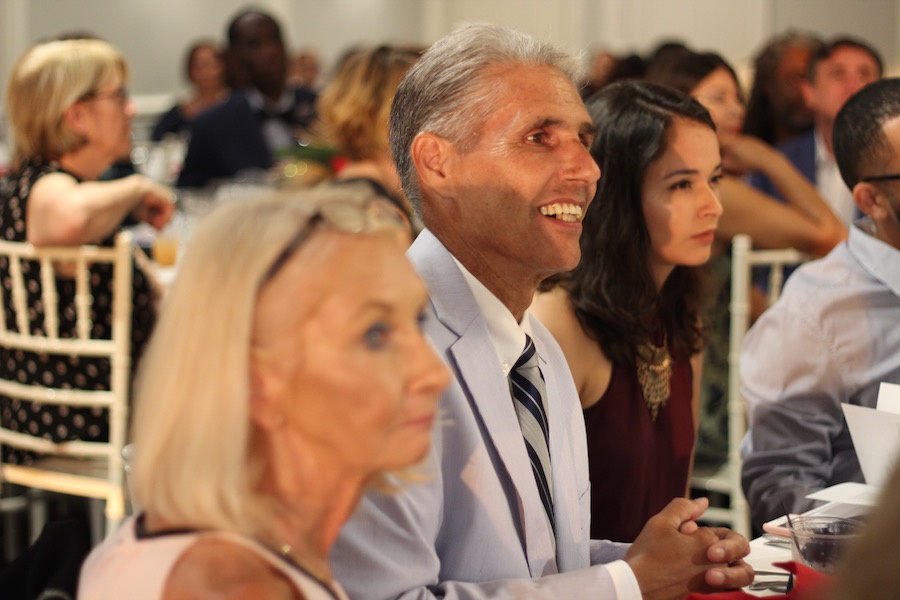 “What David has is a way that’s super relaxed and jovial,” she added. “There is just nothing but joy to what he does.”

Kauder said that that infectious joy carries over to Sepulveda’s coverage for the New Haven Independent, for which he’s often spotted carrying a massive camera around town. Nine years ago, Sepulveda also became an “accidental reporter” for the online outlet, for which he still does arts coverage. After a trip with his wife and daughter to see Barack Obama speak in New Hampshire, he proposed sending some of the photos to editor Paul Bass.

Bass had him write an article instead. It became one of the paper’s first comment wars about Obama. Nine years of coverage and a dismissed case with the New Haven Police Department later, he hasn't stopped. 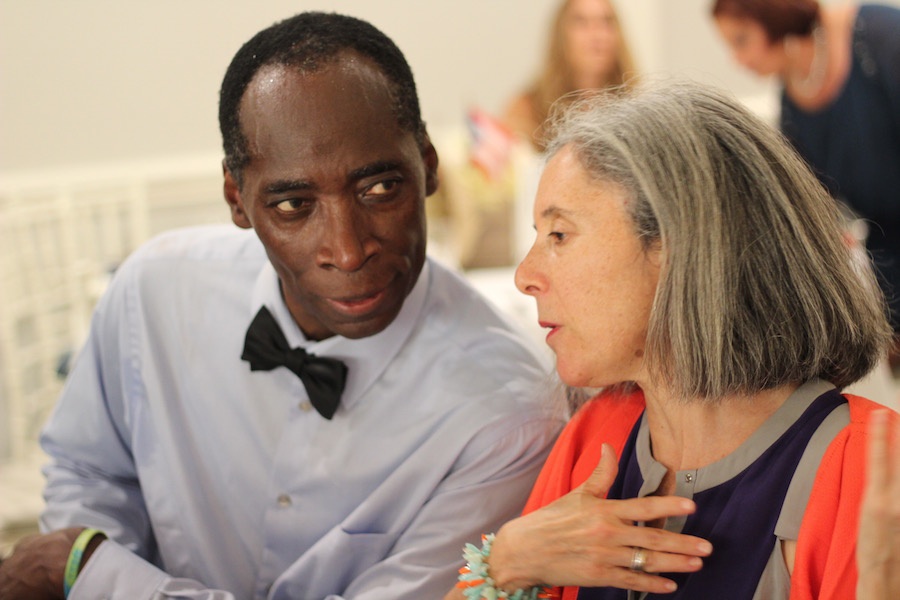 Dikoko and Kauder, both at the official Sepulveda fan table.

Sitting at a Sepulveda fan table, Westville artist and architect Semi Semi-Dikoko said that Sepulveda hasn’t just been a mentor for him—he has literally changed his life. The two met decades ago, when Sepulveda’s daughter Kara and Dikoko’s late nephew were in the same grade at school, and doing community service together during their extracurricular time.

“He’s the kind of guy you can always depend on,” said Dikoko. “It doesn’t matter what he’s doing. Whether you’re fighting cancer, or overcoming it, or in a tragedy, he’s always there. He’s a true community leader.”

“He’s been a great teacher for me,” Dikoko continued. “One of my great mentors. So the friendship and the mentorship is just priceless … I can speak about him all evening long.”