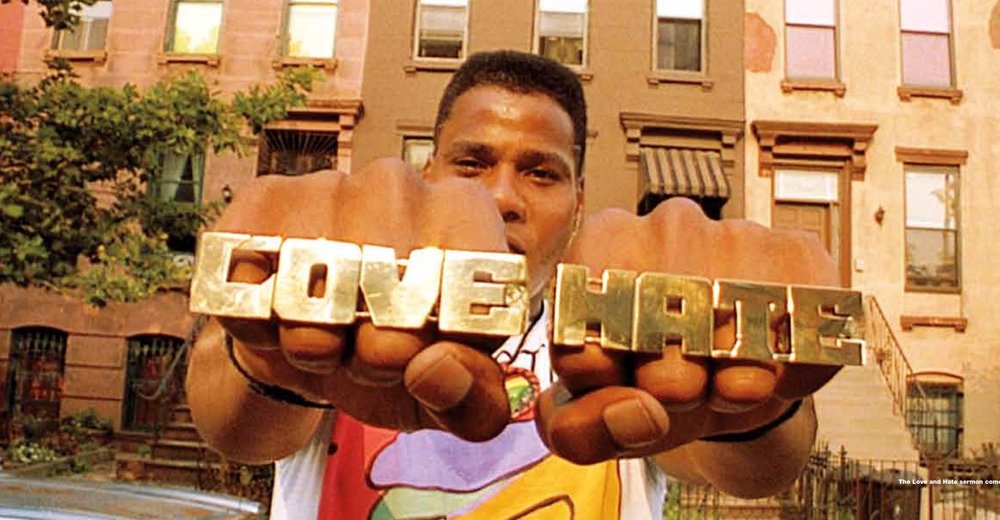 A still from Do The Right Thing .

There are many, many online lists of movie recommendations for the Fourth of July. A good number of these lists are couched in the theme of patriotism, featuring movies that reflect both positively and negatively, with both jingoism and circumspection, on the merits of calling oneself an American. What is this country’s history, its virtues, its sins?

There are a limited number of titles that appear again and again on these lists. Some, like Forrest Gump, blithely celebrate American ingenuity and simplicity; others, like Born on the Fourth of July, offer a scathing critique of the country’s masculine-militaristic infatuations; still others, like Independence Day, promise death-defying feats of charming bravery and unapologetic encouragement to pick up a flag and shout with joy.

This Fourth of July movie list is not about patriotism and its discontents. This list is about an idea, and an ideal, even more central to the American project: freedom. How has American freedom, and unfreedom, been portrayed on screen over the decades? How have movies handled this country’s founding contradictions of constitutionally mandated liberties and legal, barbaric discrimination?

Most importantly: what is freedom? A political right to vote, work, organize, think without fear of legal punishment or extralegal terror? A personal right to pursue one’s own hopes and desires and the bounds of ones own identity according to one’s own will and determination?

And what business do movies have dealing with any of this stuff?

Some tackle this subject head on. Some embody this dilemma without being directly about it. All, I would argue, have something profound to say about American liberty. And do so in pretty artful and entertaining ways.

The 13th amendment to the U.S. constitution, coming at the end of the Cvil War in 1865, ended American slavery and involuntary servitude once and for all. Except, the amendment defers, as punishment for those convicted of a crime.

In the 2016 documentary 13th, director Ava DuVernay presents a rough adaptation of Michelle Alexander’s 2010 book The New Jim Crow in her argument that the racial discrimination against African Americans imposed by slavery didn’t end in this country in 1865. Instead it morphed into convict leasing, mob lynchings, Jim Crow, and, thanks to that exception built into the 13th amendment, mass incarceration, each of which represents a slightly different manifestation of the same phenomenon: a racially charged system of control weighted with the economic and political power of white supremacy used to abuse black and brown people in the United States.

As University of Connecticut professor Jelani Cobb says halfway through the movie, the struggle of Black people in America has always been to achieve a wider recognition of their full, common humanity. Mass incarceration, this movie contends, is just the latest system of social control used to counteract that claim to humanity.

And yet, through the very substance and form of her documentary, DuVernay creates a movie that pushes back on the racialized unfreedom she so convincingly describes. The word CRIMINAL flashes across the screen at every mention, an instrument of oppression rather than a descriptor of who someone actually is. Archival footage of lynchings and excerpts from D.W. Griffith’s Birth of a Nation reveal how the history of American cinema and modern American visual entertainment have encouraged, rather than simply reflected, violent racial prejudice.

And the interviews themselves, with primarily Black and Brown politicians, civil rights activists, historians, and the formerly incarcerated, present these subjects with majesty, bathed in light and shown head on or in profile, images of wisdom and, perhaps, a promise of future freedom through understanding.

Dazed and Confused: Freedom to Move.

Dating back to his 1990 directorial debut Slacker, Richard Linklater’s movies have always been light on action, big on character, and awash in hours of fascinating, mystifying, free form conversation. His characters are on constant paths of meandering self-discovery, but always collectively. Even his most individual-focused entry, Boyhood, shows how a person’s life is shaped as much by people who surround him as by anything intrinsic to his nature.

Linklater’s 1993 slice-of-Texas-high-school-life comedy Dazed and Confused may be the most perfectly realized example of his collective self-discovery style. Nothing more than a summer day in the life of a dozen high schoolers in central Texas in 1976, Dazed and Confused in its gentle, free floating style and generous attention to the most intimate and idiosyncratic concerns of a diversity of characters demonstrates American intellectual freedom at its best: decentralized but never isolated; defiant of all authority figures but never 100 percent certain in any one action; individual but not selfish; concerned with quality of life in the present and a better life in the future; unhindered and un-self-conscious to push the bounds of the most mundane and the most philosophical of topics. And truly democratic with a lower case “d”: each of these characters, no matter where they fall on the social totem pole, is free to talk, roam, and dream of a better future.

In its very title, 1985’s Rocky IV is a little ridiculous. The fourth entry in a seven-and-counting series about a working class Italian American boxer from Philadelphia, Rocky IV, directed by the franchise’s star Sylvester Stallone, finds Rocky at the height of his wealth, fame, and success. A heavyweight champion, living in a mansion with a loving family and friends and even a talking robot, Rocky soon finds himself shuttled off to the heart of the austere, unforgiving Siberian hinterland of the Soviet Union, fighting against the lab-made aryan superboxer Ivan Drago.

Rocky IV is the cinematic apogee of American excess: freedom to indulge in wealth, romance, material comfort, gratuitous masculinity, body building, fighting, desperation, emotional effusiveness, and unfettered idealism. Rocky and, even more so, Carl Weathers’s Apollo Creed, see fighting as so much more than fighting: how they fight is who they are, and their personal capacity to push their physical and emotional limits equate to a certain vain of American freedom, to keep doing and doing and doing until you can do no more. Either you die in the ring, or your fighting prowess single handedly wins the Cold War and brings world peace.

Until he decides to break it all. To risk his career, his family, his life, even the potential safety of the fellow countryman he so longs to protect, by exposing for the world the detailed operations of his government’s illegal activity.

Snowden is a freedom fighter who selflessly risks his own freedom for what he hopes will lead to the liberation of his countrymen from needless, constant governmental observation and control. He is driven near mad with paranoia, greeted by an equally healthy skepticism and defiance of authority by journalists Glenn Greenwald and Laura Poitras. He is the embodiment of the tortured freedom of a patriot who feels he must speak critically of his country in order to push it closer to its highest ideals.

Do The Right Thing: Freedom Of Public Spaces.

In 1989’s Do the Right Thing, Spike Lee’s breathtaking movie about a hot summer day in Bed-Stuy, Brooklyn, Lee looks at the long simmering fight over just who is free to use and occupy public space in an integrated society racked by a history of violent segregation and racial prejudice.

Like Dazed and Confused, Do the Right Thing follows an ensemble of characters in a specific location over a specific time period to describe a unique community of individuals, their desires, loves, longings and discontents.

The conflict centers around Sal’s Pizzeria, an Italian American pizza joint in a community that has become almost entirely African American. The people who eat at Sal’s want pictures of Black men and women on the pizzeria’s wall of fame; Sal and his sons hold defiantly to their prerogative to put up pictures of whomever they want, and they want to see Italian Americans.

Sal’s may be a privately owned restaurant, but in the context of the movie, it’s a de facto public space: where friends and family meet, talk, learn, plan, and eat. There is a shame and an anger felt amongst members of the Black community in feeling excluded from decision making in this place so critical their day to day life. There is a virulent resistance and resentment from the owners of the pizzeria, who feel their ownership and momentary place of privilege entitle them to call all of the shots at the expense of the community that they serve.

Do the Right Thing ultimately engulfs in a thoroughly American freedom to rebel, to fight verifiable injustice with righteous and even excessive furor. The result is exhilarating but costly. The question remains: does the action leave the community any closer to free?