A Hamlet For (Just About) Anybody 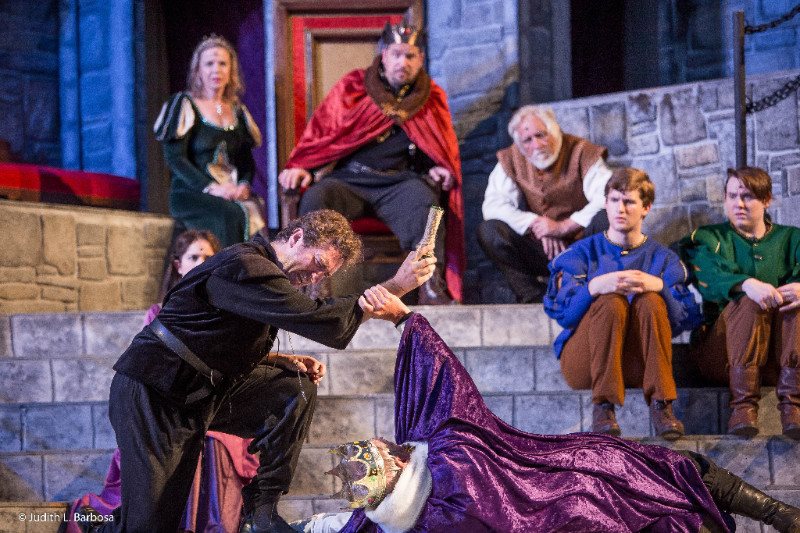 The cast of Hamlet , performances for which run on the Guilford Green through Sunday. Judith L. Barbosa Photo.

The scene is set. A portrait of a new king looms over the stage. It watches over his recently acquired throne with careful eyes. All seems like it’s in place. But as the court enters with the guise of civility, we get the feeling that there’s something rotten in the state of Denmark.

That was the scene Wednesday night, as the Shoreline Arts Alliance opened the its 17th annual “Shakespeare on the Shoreline” with a production of Hamlet from the Branford-based Legacy Theatre. Held on the historic Guilford Green, festival performances run each night through Sunday. In keeping with the festival’s mission of accessibility, each is completely free and open to the public.

If there’s a trend in theater to reinvent Shakespeare, imagining his plays in different times and places, director Keely Baisden Knudsen rejects it. This production of Hamlet values clarity over concept. She sets the play in medieval Denmark, just as Shakespeare wrote when he spun the prince into being at the beginning of the 17th century. The actors, wearing period-appropriate costumes designed by Katya Vetrov, run up and down staircases to different levels of a stunning castle on the Guilford Green. The stone walls mirror the exterior of the Episcopalian church across the street.

Around that stage, the performance is a casual affair. Attendees bring their own chairs. Kids can move around. There’s free bug spray. The organization has worked hard to make sure as many people can attend. They have assisted listening devices, braille and large print programs, and an American Sign Language interpreter at two performances.

Just as the alliance has tried to make the performance accessible to all, Knudsen has made the notoriously difficult Shakespearean language accessible as well. The actors deliver their lines clearly and slowly. Knudsen has cut extraneous plots like the Prince of Norway’s looming invasion of Denmark and trimmed the rest of the script substantially. Only the most essential parts of the plot remain.

Hamlet (The Harpers' founder Jeremy Funke), the prince of Denmark, returns home for the funeral of his father (also named Hamlet) only to find that his mother has married his uncle Claudius (Josiah Rowe). When the ghost of his father reveals that Claudius murdered him to steal the throne, Hamlet vows to avenge his father. He succeeds, but not before a set of schemes leaves most of the court dead. It is a Shakespearean tragedy, after all.

It’s clear from Knudsen’s director’s note and interviews that she wants to highlight the universality of the play and adhere to a traditional representation of the text. In the program, she writes that “my hope is that you are reminded of how similar the human experience is.”

But Shakespeare is known for his ambiguous, complex themes. In trying to emphasize all of the themes and their applicability to all times and all people, Knudsen loses some of the joy of a specific, coherent interpretation of a text. The generality feels limiting—actors stick to the script, but glimmers of interpretation are few and far between, trading experiment for a faithfulness to the text that isn’t that compelling.

The most captivating moment in the production is its most creative—Knudsen has added a moment to the play without adding any lines. In the text, Hamlet’s mother Gertrude (Barbara Hentschel) simply tells her son that Ophelia (Melanie Martyn) has drowned herself. But Knudsen departs from traditional staging and imaginatively depicts the suicide.

Ophelia appears on top of the battlement, dressed in a ghostly, white nightgown and flower wreath. A sheet illuminated by blue light billows in front of her like waves. As Gertrude tells Hamlet that Ophelia’s soaking clothes dragged her under the water, the sheet envelopes Ophelia and pulls her below the tower wall. This moment is visually striking, emotionally moving, and embodies the story like no other moment in the show.

But Knudsen’s other bold choice, casting James Roday to record the ghost of Hamlet’s lines, is less successful. The gimmick doesn’t seem to serve any purpose besides to feature Roday, who stars on the TV show Psych and went to school with Knudsen, according to her program note. The choice is a disservice to Funke, who has to act with a pre-recorded voice that couldn’t react to him.

During Wednesday’s opening night performance, the voiceover didn’t seem to phase Funke, who is charismatic and surprisingly funny in the titular tragic role. It is particularly enjoyable to watch him slip between Hamlet’s natural, pensive state and the “antic disposition” he puts on around others. Sometimes his rapid shifts between moods made serious scenes seem silly. In one scene, after Hamlet accidentally kills Polonius (Charles Merlis), a counsellor to the king, the audience laughed as Funke delivered a cheeky “Good night, mother” while dragging the body offstage. What’s so funny about murder?

In the final scene, Laertes challenges Hamlet to a swordfight to avenge the death of his father, Polonius. He plans to use a poisoned blade so even the slightest scratch will kill Hamlet. Again, Knudsen makes the usually-tense scene funny. Hamlet “steals” Laertes’ nose and pokes his butt with his sword. Their ridiculous fight suggests that a kid-friendly Hamlet is possible. But we soon learn that it’s not. The play is fundamentally a tragedy.

The scene quickly shifts in mood and the body count grows. Laertes strikes Hamlet with the poisoned blade. After the two switch swords in a scuffle, Hamlet wounds Laertes with the same poisoned sword. Gertrude wails as poison intended for Hamlet forces her to the ground. Seeing this, Hamlet takes her poisoned cup and forces the contents into a screaming and struggling Claudius’ mouth. By the end, all four lie crumpled on the ground. It’s downright gruesome.

The ending is captivating—although the audience’s youngest members may prefer Shoreline’s Hamlet Abridged!, a 40-minute version with modern dialogue meant just for them. Despite the cars driving by Wednesday, the Guilford Green seemed silent except for the moving farewell from Horatio (Sam Plattus).

Speaking to his dying best friend, he bade farewell with the words “Good night, sweet prince.” It was a sort of reminder to the audience that its good night on the Green was also coming to an end. And after the lights dimmed, everyone in the audience seemed to remember to breathe again.

Hamlet runs Aug. 1-5 on the Historic Guilford Green, starting each night at 7:30 p.m. Performances feature both a pre-show talk an hour before the show and post-show talk back with Shoreline Arts Alliance's Chief Executive Director, Eric Dillner, and Legacy Theatre's Knudsen. For more information on the production and the Shoreline Arts Alliance, click here.