When New Haven’s Present Is Its Future 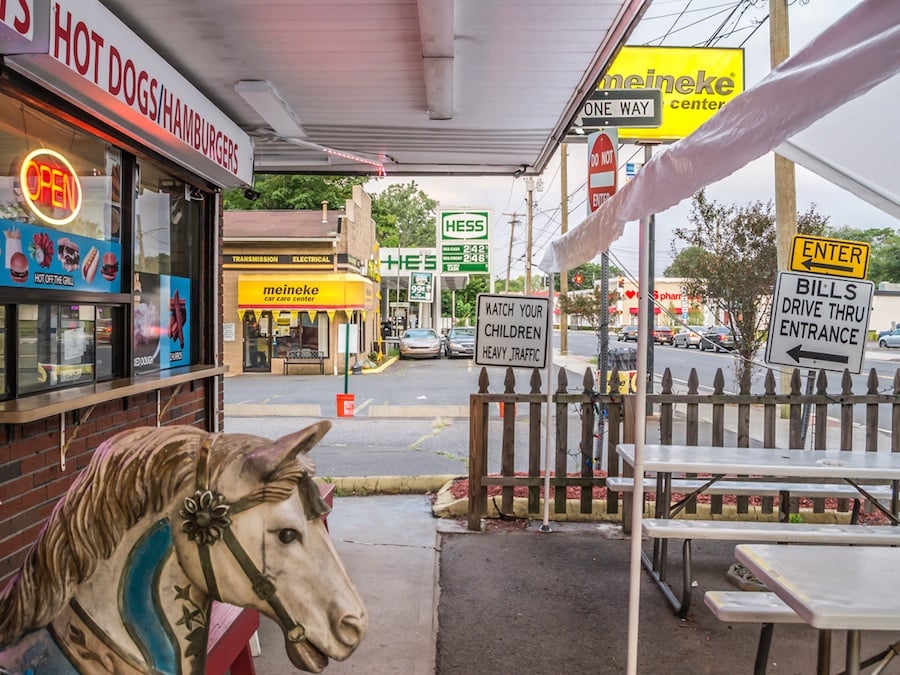 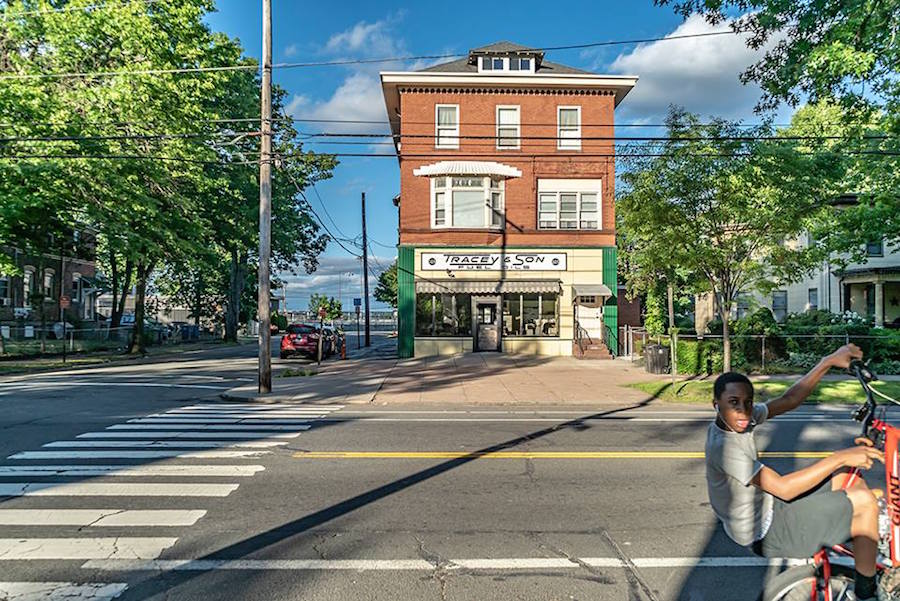 At first, you think it’s just another portrait of a building. Green paint on white stucco. Wood against red brick. Howard Avenue stretches out under high-hanging blue sky, grey-fringed clouds. But there he is, in the lower righthand corner: a kid, no more than 12 or 13, popping a wheelie as his bike gleams beneath him. Handlebars up. earbuds in. Mouth open, tongue on its way to sticking out. The sunlight soaks his skin. This is summer, exactly as it’s meant to be.

The image is one of several in New Haven Photographs: A Future History, a new body of work, book, and exhibition from the artist Daniel Eugene and Lunch Money Print co-founders Chris O'Flaherty and Mark Donne. A months-long undertaking, the show runs at Hull’s Second Story Gallery this Friday through Sunday, and then continues online at Lunch Money Print’s website. 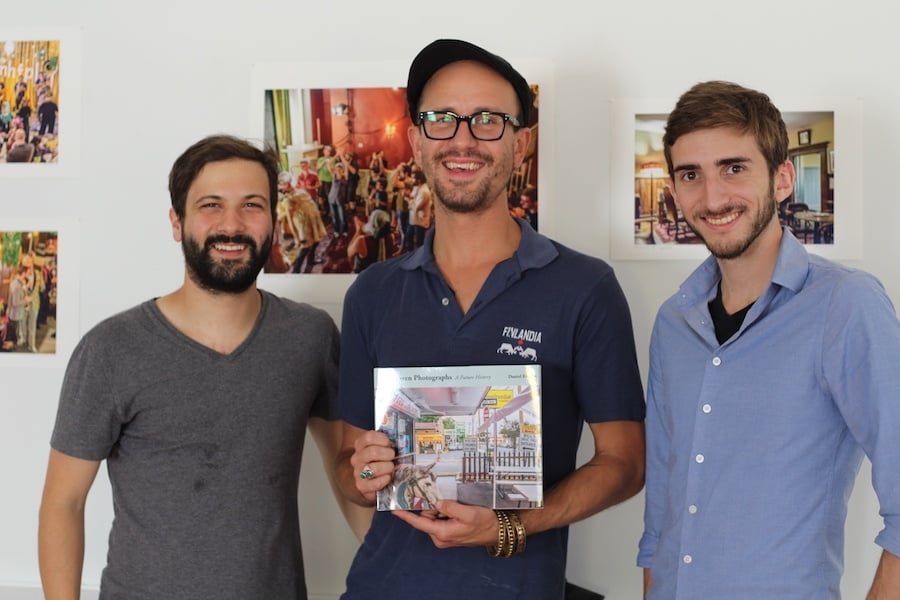 New Haven Photographs: A Future History originated early last year, as Eugene began documenting the city’s drag queens in performances at Partners, 168 York Street Cafe, and Gotham Nightclub for a project called #NHVDrag. As he grew that series, he realized that he wanted something even bigger—snapshots of New Haven at a specific moment in time, told with care and compassion. He saw friends and colleagues growing tired of the city, unable to see it with new eyes.

“It is essential that we exercise our power to see the world anew with vision unclouded by over-exposure or cynicism or helplessness,” he writes in an artist’s statement for the show. “To look around you and know that it is in your power to see beauty and find inspiration in commonly overlooked and unlikely places as well as revelations in the familiar.”

“Future history is a way of seeing,” he added Thursday, as he, O’Flaherty and Donne installed the show. “It’s a way of directing you to the right now—you see the present with a deeper meaning. You can have a greater perspective of today, today.”

The result is a love letter to the city, warts and all. It is hung carefully over two rooms, with an introductory text and vistas on New Haven that are a literal welcome to the city. This isn’t a show with an agenda, like Tom Burr’s inglorious homecoming at the Pirelli Building last year. It does not wish to throw New Haven under the bus, as the Yale University Art Gallery was keen to last year with Robert Goldberg and Donovan Wylie’s Candy/A Good And Spacious Land last summer. 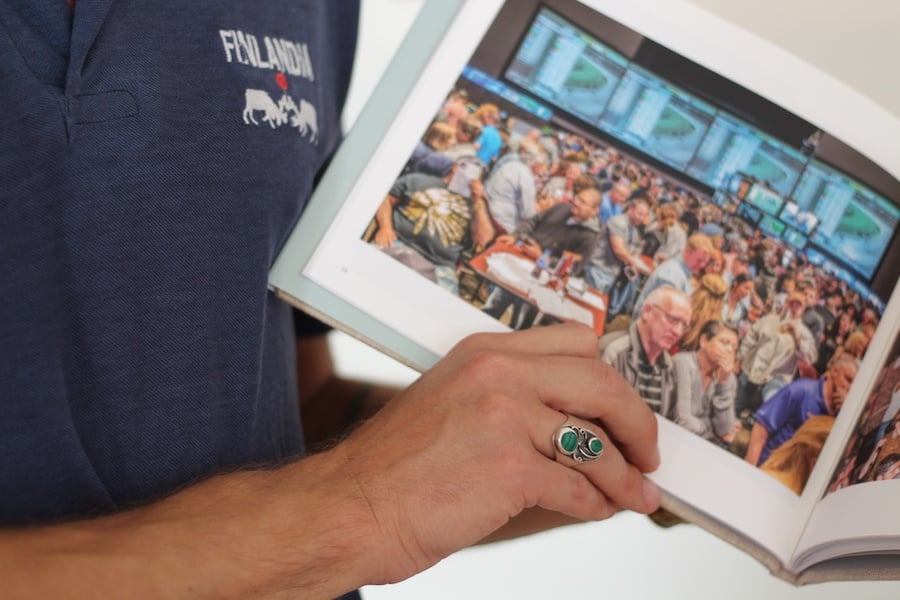 Instead, it’s a celebration of Eugene’s New Haven as it is right now, and an invitation to join it. On the first wall, the Q Bridge beckons; cars come off the highway and into the city; a red-and-chrome Metro North train pulls into union station. You want to be in New Haven, because it seems that’s where all the cool kids are going.

From that moment, you are sucked into the city, discovering its nooks and crannies right along with the artist. In images that might seem foreign amidst the city’s sidewalks, streets, and wide, pothole-plagued avenues, Eugene reminds viewers that New Haven is a city on the water. The artist has been working with local historian Joe Taylor, and wanted to capture the city’s history of oystering before that too disappeared. Shots of the Quinnipiac river populate one section, with bone-white oyster shells heaped on top of each other like piles of salt.

If you are a New Havener—maybe you weren’t born here, but you say it’s where you’re from now when people ask—it’s a massively fun game of eye-spy. All around the gallery, images are presented in deep, brilliant color, packed with enough visual information to warrant a second, third, and fourth look. There are easy giveaways: the fragrant counter at Caseus’ cheese shop (though it’s now a historical relic); a shot of Miya’s on Howe Street; the geometric glass ceiling of Book Trader Cafe downtown and even an homage to Hull’s, shot from across the street on Chapel. 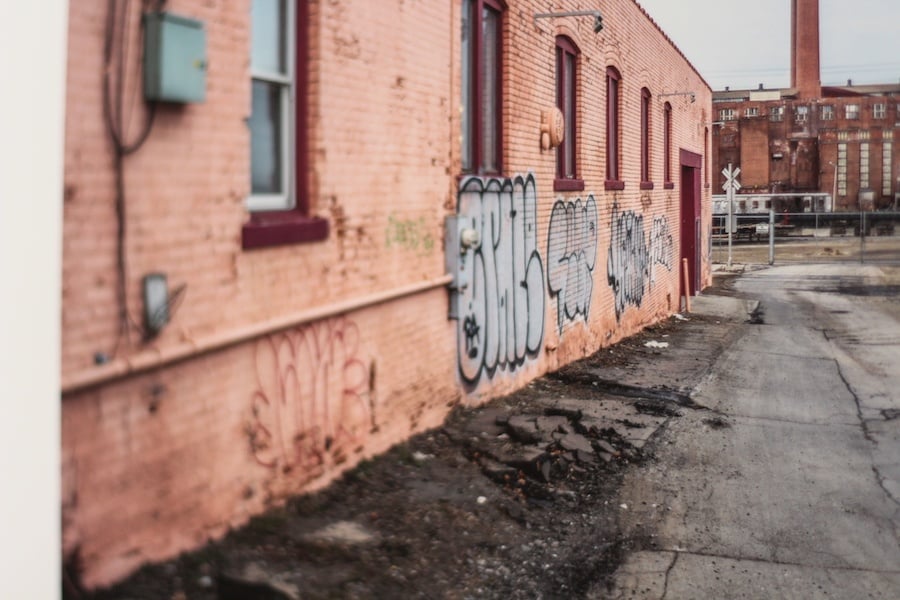 But much more exciting are the city’s lesser-frequented destinations, the ones that are just stops on a drive, walk, bus, or bike ride home. There’s the shot of Howard Avenue you can look at for hours, teasing out every detail of an old building before turning to the young cyclist. There are markets on Chapel and Whalley, with signs you find you never paid enough attention to—if you’ve walked by those corner stores at all. Theres brackish water that you want to sidle up close to anyway, to smell the fish and oil and salt that built this city when Long Wharf was still a long wharf, and not a sea of concrete.

Stay for a while, they encourage viewers. Get to know us.

There are old buildings made new here, like Bill’s Carousel on upper Whalley Avenue. Eugene gives us all the information we need to find the space—the car repair center and gas station nearby, a CVS Pharmacy with its signature red-and-white exterior, the cars whooshing past outside. But the frame is clipped—we don’t see Whalley, but a plastic pony, plastic picnic tables, and signs that direct traffic. It’s a totally new way of seeing the shop.

Or a church on Kimberly Avenue, regal and straight-backed. The front of a truck, severed from its body, obscures part of the exterior. The rest is framed in perfect right angles. You look ever closer.

To Eugene’s credit, none of these shots are plagued by nostalgia—there is perhaps nothing more dangerous than a white man’s nostalgia, and he knows it—so much as a masterful sense of recent history. It’s the impulse to create an archive before someone’s even thought about it. In one shot, dancers from Elm City Dance Collective (ECDC) link hands during New Haven’s participation in this year’s “National Water Dance,” transforming Lighthouse Point Park into something other-worldly for just a moment. Just feet away, a sort of lawlessness breaks out inside Sports Haven, where a bright, flashing wall of televisions broadcast the Kentucky Derby results.

Another constellation of shots, and drag queens make their way onto Partners’ stage and into its dressing rooms, lighting up queer nightlife in New Haven. A kind of wonderful, grainy noise makes it into the photographs, and suddenly you are feeling the darkness of the bar. You smell rum and coke and sweat, you hear pumping bass and pop music, you see people who you may know or you may not.

In this way, it’s political without ever trying to be—Eugene depicts May Day celebrations, queer nightlife, gamblers, and gentrifying neighborhoods as not trademarks of counterculture and vice, but an integral part of the city’s history.  In keeping with the theme, he closes the show with two strong images, one right on top of the other.

In the first, a piece of graffiti that was up for less than 24 hours, someone has sprayed “FUCK TRUMP” on the side of a building. Black paint obscures a faded mural that Josef Albers did during his time at the Yale School of Art, and you’re left to wonder—who did this? Did Yale clean it up, or did the city? Was it a Yale student, or a New Havener?

The other suggests that it doesn’t matter so much, as long as it was there, and made someone see the city with New eyes. In the shot, a cork board has been completely covered in white paper, printed with neat black text. The setting is Yale: the cork board outside Durfee’s and the Elm Street post office, framed against rough red brick and a neat flower pot. But the message, Eugene seems to say as he captures the shot, is universal.