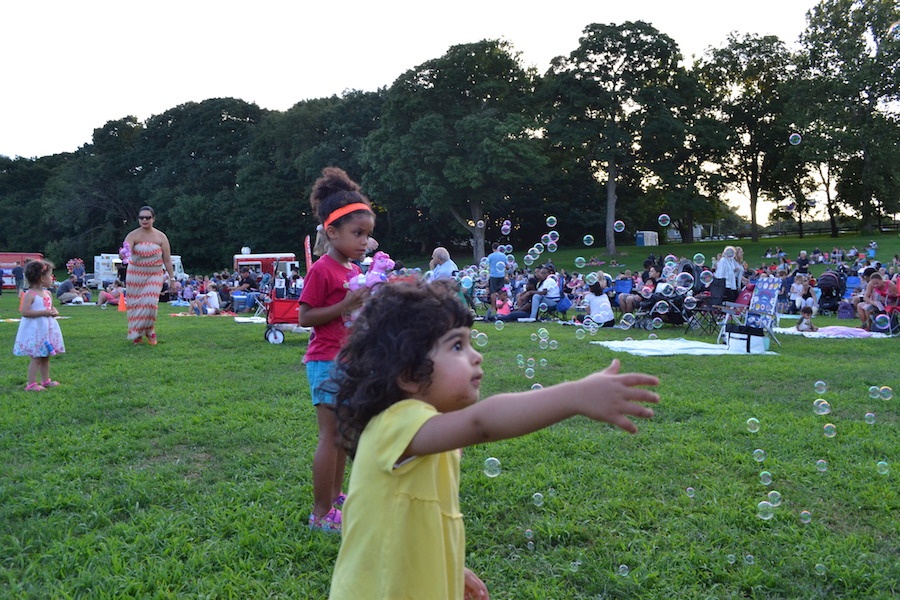 A gaggle of children bounced and swayed on stage at Hamden Town Center Park while a crew hurried to inflate a giant outdoor movie screen before sunset. Top 40 tunes rang out over the field as more families arrived, hauling wagons filled with colorful blankets and coolers, nudging their children to join those on stage for the chance to dance and win prizes.

The impromptu dance contest was a fitting prelude to Friday night’s screening of Disney Pixar’s Coco, the first of four free movie nights scheduled through the month of August at Hamden Town Center Park. For more information on the series, which runs through Aug. 24, click here.

Set in a small Mexican village, Coco follows the story of 12-year-old Miguel, determined to become a musician in spite of his family’s generations-old boycott against music. It is personal for the family: his grandmother Coco is the child of a father who left to pursue music, leaving her and her mother in the lurch decades before. 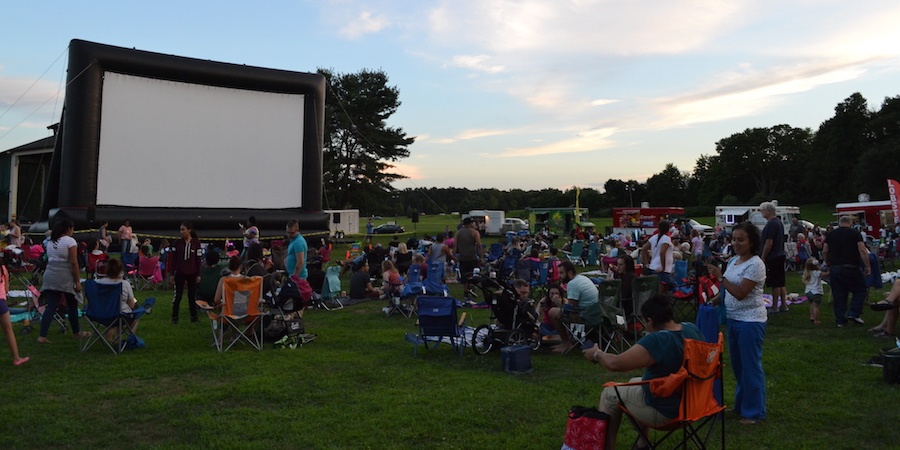 When Miguel defies his family’s musical ban on Día de los Muertos (Day of the Dead), a Mexican holiday dedicated to remembering the deceased, he finds himself uncovering a family mystery in the Land of the Dead with help from his deceased relatives. In the film, those relatives are able to visit the world of the living during Día de los Muertos as long as their photo is displayed by the living, and memories of them are preserved.

“I think it’s important to have kids understand the true meaning of things that we celebrate and observe,” said Hamdenite Michelle Perez, adding that after watching Coco for the first time, her 5-year-old daughter Charlotte Martinez put her picture up around the house to make sure she’d never disappear. “She understood the actual meaning and she’s only five, so that was really nice.”

Perez came to the event with her daughter, mother, sister, niece, and family friends. Martinez and her 3-year-old cousin Isabella Maddelena ran around us as we spoke, surrounding us in a cloud of bubbles shot from hot pink bubble guns. Their mothers agreed that Coco’s emphasis on multi-generational family and tradition is a message they are glad to see celebrated in a children’s film.

“We don’t celebrate it in Puerto Rico,” said Yasmin Perez, “but it’s a beautiful tradition… It’s all about honoring, remembering, and cherishing. I think it gives the whole Halloween thing a different meaning.”

Nearby, food trucks dished out a variety of treats ranging from deep-fried Oreos to Italian ice, cinnamon buns to cupcakes, as part of a special Dessert Fest food truck event hosted in conjunction with the screening.

“Without events here, what we had was a really pretty vacant lot in the center of town,” Fitch said, adding that the commission’s grand plan involves a lot of infrastructure including splash pads and playgrounds. In the interim, the movies are are easier to pull off because they don’t cost very much.

Fitch added that all this summer’s movies were nominated by the commission and voted on by the public through Facebook—except for one. They decided to screen the movie Holes on Aug. 17 to tie in with a book being read by the Fly Guys Book Club. The book club is a program of Fixing Fathers, a local organization dedicated to helping fathers strengthen relationships with their families.

Josefine and her dad Alex Bottiglio.

The book club will attend on Aug. 17 as the Commission’s special guests. Other upcoming movies include Jumanji on August 10, and The Goonies on August 24.

“The importance of these events is to provide opportunities for the community to come together and learn about each other in safe and welcoming environments,” said Alisha Martindale, assistant director at the Hamden Department of Arts and Culture.

Back by the stage, a toddler in a floral jumper and bright blue Crocs reached for the confetti cupcake she’s earned from the Sugar cupcake truck, a prize awarded to all the children who took to the stage for the dance off. Her father, Alex Bottiglio, said he and his family came out to give 3-year-old Josefine the chance to socialize with other local children. 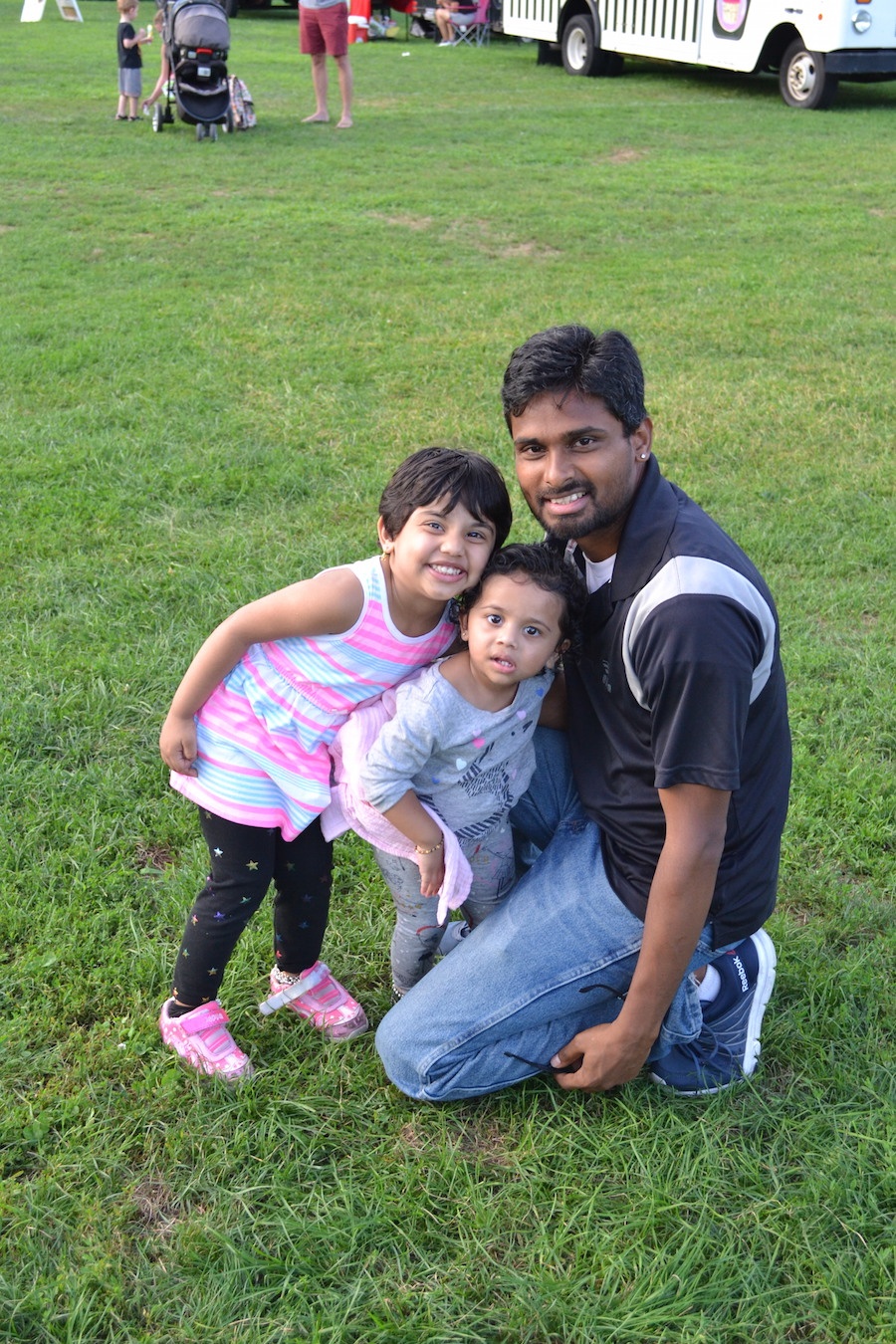 “It’s important for kids to see each other outside the context of school or daycare,” he said. He added that it’s only his family’s second summer living in Hamden, but the regular free outdoor events have been great for meeting other families and kids.

Coco was the first movie 3-year-old Sloka Sirasani saw in theaters. She continued dancing close to the stage even after eating her earned cupcake. Her father, Gopal Sirasani, said they live close by and come to the park every day, and weren’t expecting to stumble upon the event.

“It’s fun for the kids,” Sirasani said, “They meet other kids and they play. That’s how they become socialized.”

Valerie Horsley, a democrat running for State Senate in Connecticut’s 17th district, took a night off from campaign work to spend time relaxing in the park with her family—though she was still sporting a campaign button shortly before the movie began.

“I knocked on doors earlier so I could do this,” she said, lounging with her boyfriend and daughters alongside Hamden Democratic Representative Jody Clouse and her wife and daughters.

“Not only are we diverse ethnically, but we are also really diverse socioeconomically,” said Clouse, speaking about the importance of hosting free outdoor events that bring residents out of their neighborhoods and foster community. “It really does bring everybody together in one spot.”