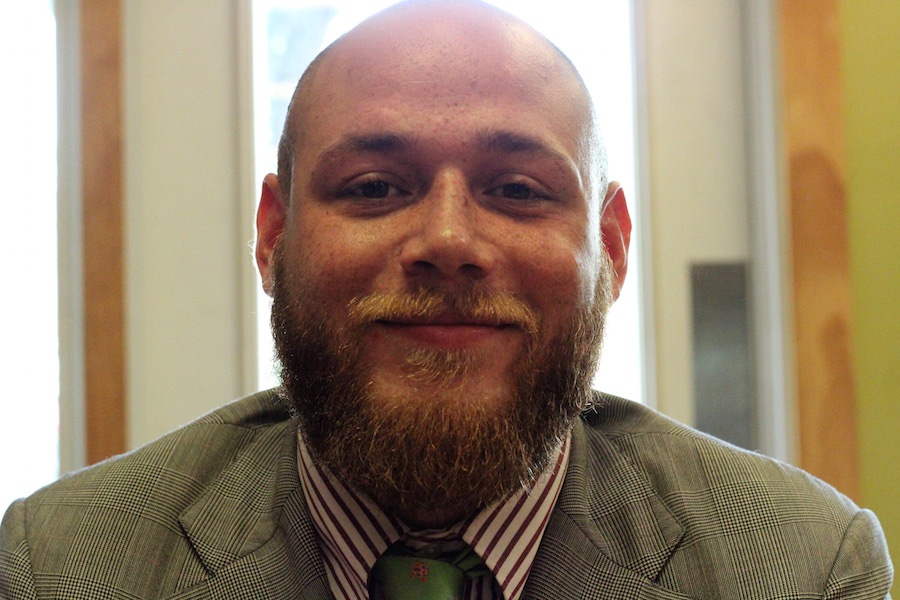 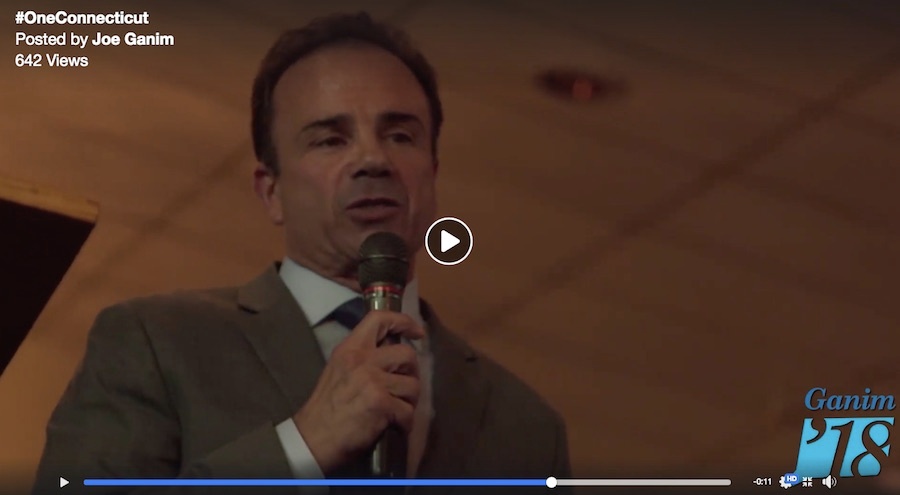 This is the third piece on the role of arts—rhetoric, photography, film, and media—on the gubernatorial campaign trail. For the previous pieces, click here, here and here.

Joe Ganim is standing on a table or stage—you can't quite tell which—in the dusky yellow light of an old building. The ceiling above him is tile, studded with low lights. He’s looking up and out into a crowd, eyes fixed on some point in the distance. Symphonic strings build under him.

“One. Connecticut,” he declares on a staccato beat. And the scene is tumbling forward, Ganim’s voice coasting over each vignette as the camera works to convince you: really, this is your guy. You want him in office.

The eye behind that video is 30-year-old Clyde Ramos, a lifelong New Havener who has spent the past eight months traveling the state as Ganim’s director of digital communications. As the gubernatorial campaign enters its final days before the Aug. 14 primary, Ramos is hoping his videos will double as a secret weapon, leading voters to the polls with an image of Ganim as someone who can win in November, and turn Connecticut’s economy around.

“I’m just trying to help them see my candidate the way I see my candidate,” he said in an interview Tuesday, grinning over a 24-ounce coffee at The Coffee Pedaler in East Rock. “Especially when you’re talking about Joe Ganim. My job is to take my point of view about who Joe is, what he’s about, let people see Joe in the way that I see Joe. Literally from my point of view—the camera’s where my eyes are.”

That verve wasn’t born on the campaign trail, but watching artists and skateboarders navigate their way through New York City eight years ago, when Ramos was in his early 20s and took a break from New Haven. Living  on the city’s Lower East Side, the young videographer befriended several artists and “real authentic characters,” shooting alongside them as they practiced their craft and zigzagged through the streets on boards. He went on to study at New York Film Academy, landing video and editing work for the designer Zach Posen, the National Basketball Association, and Monica Watkins’ nonprofits Beauty For Freedom and Art In Motion after he finished.

But as he climbed a corporate ladder, Ramos felt himself falling out of love with the craft. By the time he returned to New Haven last year to start a family, he’d placed videography on the back burner, working as a field organizer for Toni Harp’s 2017 mayoral campaign. He found that politics were addictive: he loved re-learning New Haven’s neighborhoods as he knocked on doors and coordinated volunteers across the city, and found himself pulled in by talking to people about the issues that drove them to vote. 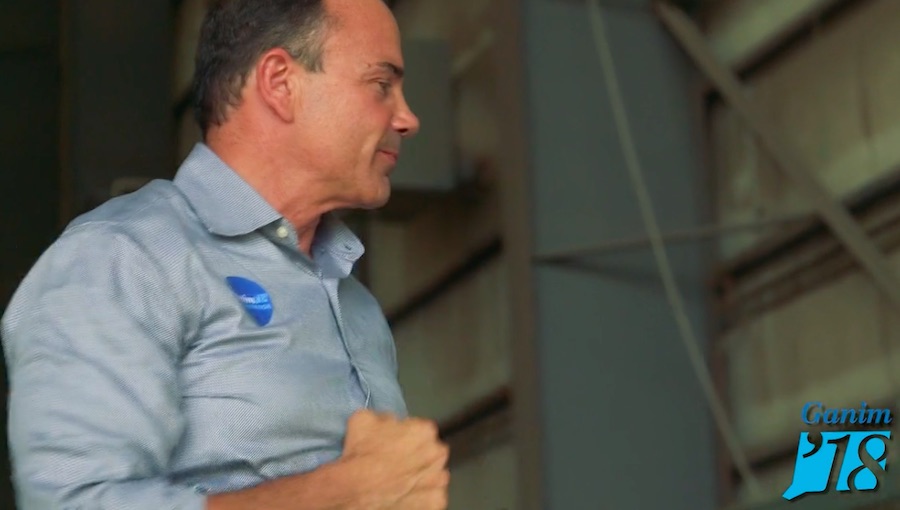 “Everybody who you’re meeting cares about something, and is passionate about something,” he said. “There’s no better thrill than running around at breakneck speed … it’s almost a luxury. For people to let you into their lives, into their thoughts, into the things that they care most passionately about and to have those discussions.”

Ramos joined the Ganim campaign in January, hired to do quick turnaround videos and eye-catching posts for Vimeo, Instagram, Twitter and Facebook that could complement Ganim’s television spots by Marlin Strategies and Castle Gate Media, and reach out to millennial voters. He’d heard about the position from Campaign Manager Jackie James, former chair of the New Haven Democratic Town Committee and its short-lived small business chief.

For both of them, Ganim seemed like an unlikely hometown hero who could win both a primary and a general election. He’d “been knocked down and come back from it,” reelected to the same mayoral office that had seen his fall from grace. Ramos liked the work that Ganim was doing in Bridgeport. He knew it would be a challenge to get voters to see the same Joe that he did—and so he began traveling the state with the candidate, his camera and zoom lens never out of reach.

From the beginning, Ramos said he honed in on the intimate, day-to-day interactions that made him feel like Ganim could lead. Instead of capturing the candidate solo—as Putnam Partners later did in three ads for Democratic hopeful Ned Lamont—he looked for moments that had Ganim out in public, shaking hands and talking to constituents and prospective voters.

He learned when it was important to stand close to the candidate and when it was important to hang back, keeping his lens ready for those tracking shots. He worked to edit on sharp deadlines, deciding what he would cut and keep as he was filming. The goal, he said, is to show viewers a Ganim that is ready to take charge—not the felon who spent seven years in federal prison on corruption charges, but a candidate who can lead the state.

“When you watch my videos, he’s the governor already,” he said. “He’s a leader. He’s up there, he’s connecting with people, he’s speaking from deep inside his heart … which is very hard for other politicians to do who maybe haven’t had some of the ups and downs as a Joe Ganim has. I think that he’s able to connect with a vulnerable place within himself that allows him to connect with voters.”

“He’s not standing, or sitting at a desk, or sitting in a diner, or driving in a car,” he added, directly referencing Lamont’s campaign ads behind the steering wheel, sipping coffee alone in a packed diner, and talking to the camera in an otherwise empty boardroom. “He’s out with the people.”

He recalled showing up at Bridgeport’s Derecktor Shipyards in late July, where Ganim was scheduled to receive an endorsement from the International Brotherhood of Electrical Workers (Local 488 of Monroe), the International Union of Operating Engineers (Local 30 in North Stonington), the International Union of Operating Engineers (Local 478 in Hamden), and the United Association (Local 777 Plumbers and Pipefitters in Meriden). Ramos got there early, and set up his gear by the podium where Ganim was supposed to speak. He saw union members trickling in. But no Ganim.

Then he heard a familiar voice—Ganim had hopped up into a truck bed in the middle of the crowd, shaking hands as he took a cordless mic and looked over the crowd. Ramos raced over(in the raw footage, he said he can see the camera’s sharp pivot) and began shooting from a low angle, trying to fit everything in one take. There was Ganim shaking hands with grinning plumbers and pipe fitters. Ganim pressing his hand to his heart in a tight-fitting navy blue polo. A close crop of Ganim thanking the crowd for coming out with just weeks before the primary.

“He went on to give a speech that I wanted to make sure that everybody heard,” said Ramos. “People need to see Joe. Not just read about Joe. Not just do a quick google of Joe and form an opinion. You gotta see the guy in action. You gotta meet the guy, you gotta hear him out.”

Earlier this week, he saw that character emerge again in New Haven, where Ganim was speaking at Trinity Temple Church Of God in Christ on Dixwell Avenue. After taking another long cut—Ganim on a stage, speaking to attendees about the importance of a Connecticut united—he raced home to make a video titled “One Connecticut,” framing Ganim’s Trinity Temple appearance with vignettes from public festivals and voter one-on-ones.

As the primary looms, he said his goal is to get voters to the polls with the same conviction that moves him to do his job each day.

“I’ve already cast my vote when I decided to work for the campaign,” he said. “All that’s left to do is just strengthen my resolve that this is my candidate.”

Representatives from fellow Democrat Ned Lamont’s campaign, which is running a number of digital-only videos under the hashtag #TeamNed, did not respond to requests for comment on its digital communications strategy.