He'll Sing For Your Vote 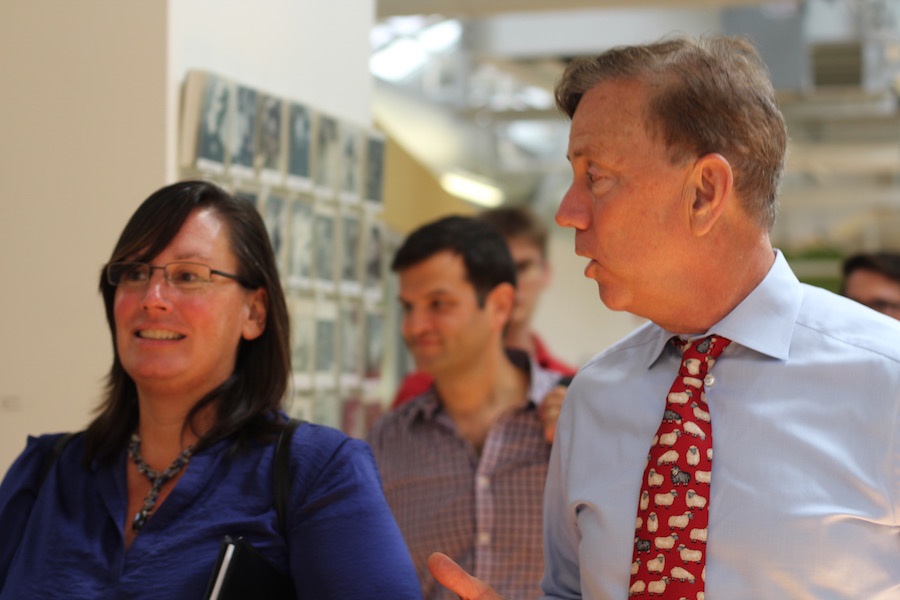 nomic development. But could he also be the governor who sings?

The Democratic hopeful and party-endorsed candidate raised that question inadvertently Wednesday, as he received endorsements from Yale unions UNITE HERE Locals 34 and 35 in New Haven’s Scantlebury Park. A

s he neared the end of his remarks, he leaned on the words of revolutionary Bob Marley, invoking a song first recorded 45 years ago.

“I need you to stand up,” he shouted to the crowd as rain began to fall. “We got a primary in a few days, and more importantly we have a general election in November. You gotta talk to your family, friends and neighbors. You gotta tell ‘em how important, what a difference we can make if you get up stand up, stand up for your rights. Get up stand up, don’t give up the fight!”

The move channeled politicians who have used song as a rhetorical device, including Barack Obama’s scene-shattering “Amazing Grace” in 2015. From the front of Wednesday’s crowd, labor organizer Scott Marks began clapping and cheering loudly, yelling “Ned! Ned” over a smattering of applause. Lamont brought it home with a tremulous, beaming finish before handing the mic off to Shawn Wooden, candidate for State Treasurer.

It was a spontaneous move, said campaign spokesman Rob Blanchard. Reached by phone after the endorsement, he recalled that Lamont had spent the ride to Scantlebury Park debating what to say "to get the crowd fired up." The candidate recalled the fire of Yale's unions in the 1980s, when their rallying cry had been "Boola boola give us the moola!" He thought of pulling that quote back out for some of the unions' older members. But something changed as he marched with the unions and then took the mic—a sense that a political fight needed stronger words.

"Honestly I believe that the Bob Marley just came over him, hearing what UNITE HERE stands for," Blanchard said. He referenced the song's roots, which stem back to Marley's tour of Haiti. While there, the artist was bowled over by the island's immense poverty, and moved to write the piece.

"There's some similarities where people are standing up and saying 'enough is enough,'" Blanchard said. "We want jobs, opportunities for youth, no more violence in our streets ... he really did feel like we are in a revolution here, statewide and nationwide."

Lamont has a longstanding affinity for music that started with a band called “Flower Pot” in middle and high school, and has continued with informal piano playing at stops on the campaign trail. After Lamont snagged the party endorsement at the state's Democratic Convention in May, Blanchard recalled that he serenaded campaign staff at an afterparty. More recently, he found himself speaking with students at the Connecticut Center for Arts and Technology (ConnCAT) about his soft spot for Motown, counting Stevie Wonder and Diana Ross among personal favorites.

“It’s a lot cheaper than a psychiatrist, much more therapeutic,” the candidate joked on an arts-focused tour of New Haven last week. “And I play sometimes on the campaign trail as I go around. I go to senior centers—they don’t necessarily want to hear about Medicare reimbursements. Sometimes people just want to see who you are. Play a little piano. Sing a little ‘Summertime.’”

"Everyone has an uncle or their dad that will break into song," said Blanchard. "That's Ned."

For more from this year’s the gubernatorial campaign trail, click here, here, here and here. To read about Lamont's recent union endorsements from our colleagues at the New Haven Independent, click here.