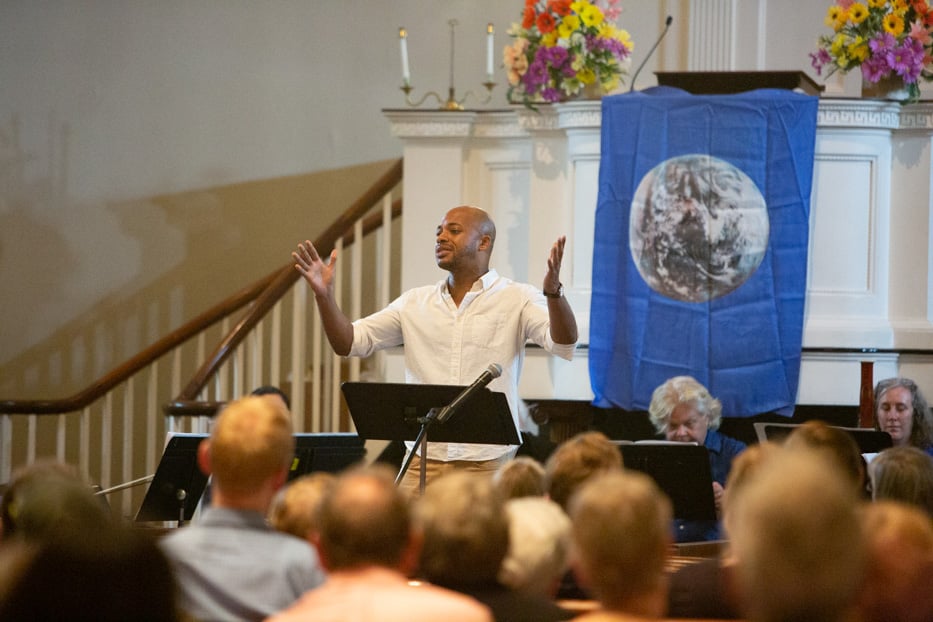 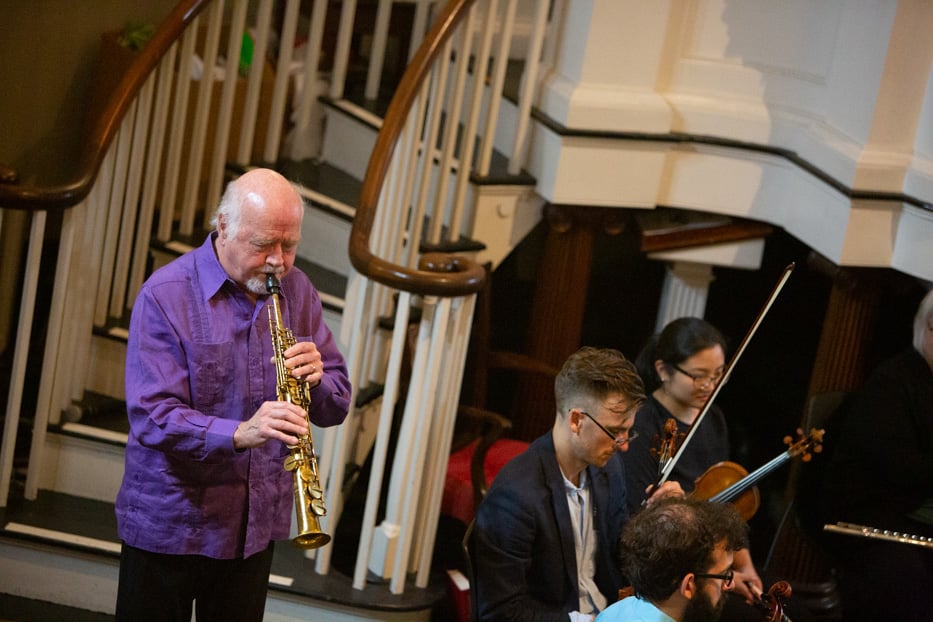 Somewhere at the front of United Church on the Green, musician Paul Winter had Johann Sebastian Bach walking into a knot of birdsong. Winter’s saxophone rose, and a common wood thrush called out his response. The instrument crested, and the thrush delivered on a note that was equally-full lunged. A crescendo, and Bach walked further into the woods.

Back in the church, Winter had dozens of people following along.

Wednesday night, Winter was one of several performers at Simple Gifts for Mother Earth, a concert and speaking program designed to raise awareness of a growing climate crisis and the global climate strike planned for Sept. 20 through 27. Local chapters of the strike are planned for New Haven and Hartford that Friday, with a noon rally scheduled in front of the State Capitol.

"What we are doing here is a good thing [for mother earth],” said Tiokasin Ghosthorse, founder and producer of First Voices Indigenous Radio, early in the evening. “We are gathering for her. We must hold her in our arms from now on, because she's cared for us without, unconditional, anything. She just cares for us every day.” 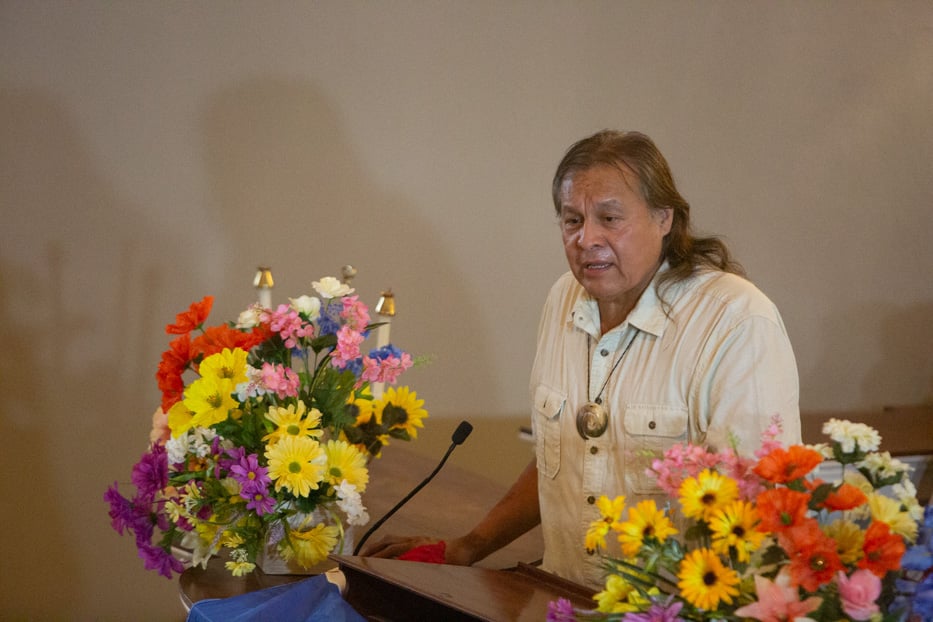 In an interview before the event, Tucker suggested that “we wanted to have this conversation to engage more people,” and particularly to bridge disparate movements in climate activism, climate justice, climate science, and the arts. Before the concert and again during the program, she described the evening as a chance to bridge town and gown and young and old, dedicating Simple Gifts For Mother Earth to “youth of today and tomorrow,” so many of whom have made climate justice their mission.

“We are called to seize the moment, to give our all,” she said Wednesday, speaking to attendees as if she were giving a sermon. And it very much was—just one where the words of Pope Francis and the youth-led Extinction Rebellion held the same weight. 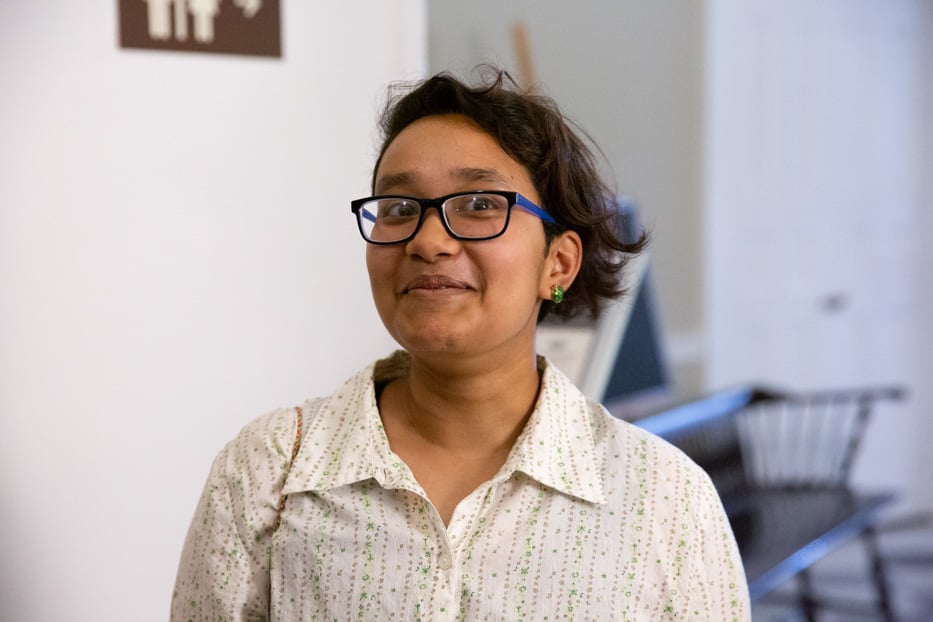 Over the course of the evening, speakers delivered that message again and again. Near the beginning of the program, UCG Rev. Jocelyn B. Gardner Spencer urged attendees to “care of this planet as not only a moral imperative but as a spiritual necessity,” priming them for statements that yoked political responsibility, economic justice, public health, animal welfare, food security and renewable energy.

In a city where asthma rates are through the roof for kids in poor, largely Black and Brown communities, where food insecurity and redlining share similar data maps, where failing public transit is a civil rights issue, those statements felt right on time. Bridging town and gown, Metropolitan Business Academy student Adrian Adara Huq described the emergency climate resolution just passed by the city’s Board of Alders, a statement that garnered loud applause.

Under the resolution, the city has been tasked with the creation of a new Climate Emergency Mobilization Task Force to significantly reduce New Haven’s greenhouse gas emissions by 2030.

A longtime member of 350 CT, which was founded in 2008, New Havener Melinda Tuhus described the move toward intersectional climate education in the state, where the group’s actions have more recently focused on climate change and labor, climate change and women, and climate justice in a move toward renewable energy, green jobs, and a more sustainable economy. She praised the number of youth now joining and even spearheading chapters of the movement, many of whom shared the lectern with her during the evening .

“I can’t tell you how inspiring this is to me, as I have been focused on climate issues for the past decade or so,” she said. “That’s a whole generation in this rapidly expanding climate movement.” 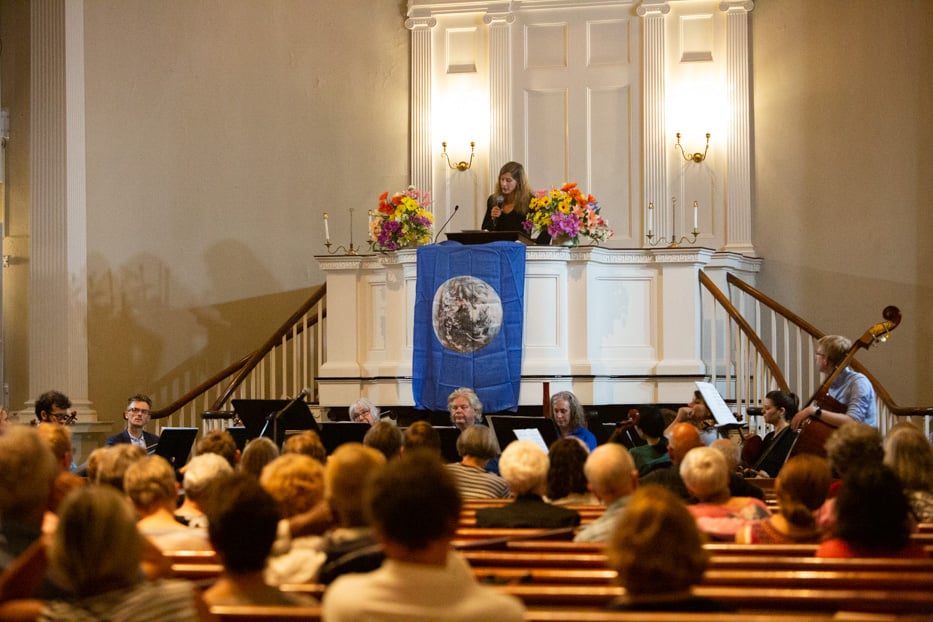 But perhaps the most galvanizing moments of the evening were those that came with few words, or no words at all. After opening the evening with the Shaker hymn “Simple Gifts,” musicians transitioned into a selection from Aaron Copland’s 1944 Appalachian Spring, which conjures a sort of hard-to-pinpoint nostalgia for open landscape, propulsive rolling hills and the possibility that each of them holds.

The piece is a sort of artistic nesting doll: Copland originally wrote it as a score for the dancer Martha Graham, inspired more by her movement and a smattering of folkloric elements (including “Simple Gifts”) than the actual people and stories of Appalachia. In fact, Graham was the one who titled it, riffing on a piece by the poet Hart Crane. And the ballet that springs from the music isn’t about rural nature, so much as love that blooms in that clean, not-totally-tamed place within in it.

But listening, it’s almost impossible not to enter a flow state that evokes the grandeur of a natural landscape, and perhaps the human interventions on it. A curtain of strings lift, and in one's mind, sun rises and mist rolls over blankets of green. It picks up, and one might feel like they're in a climactic land, where anything is possible.

It feels a little like looking at one of Frederic Edwin Church’s landscape paintings, full of reverence and idealism, but also an acute pain at what manifest destiny has so spectacularly ruined. It’s a listening experience, indeed, punctured by the realities of surface mining and profound poverty, enough to make one want to turn back the clock when the instruments have finally died down for the night. 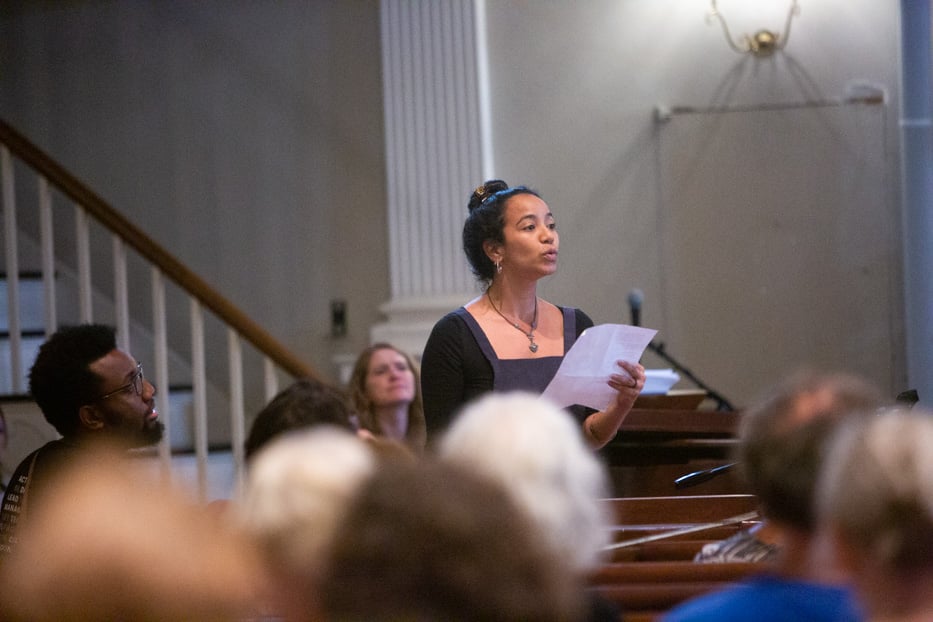 So too for Winter, who has paired music with nature-raising consciousness for decades. As he transitioned from his work “Sunset” to a second piece from J.S. Bach, he brought the audience back to Northwest Connecticut, circa late 1970s. Walking through the woods in those years, he recalled, he was enchanted by the call of the common wood thrush. He delighted in hearing it on his daily walks. But then the calls began to fade.

“And I found over the years that I have to each year walk much further,” he said. “Because they’re not making it back from their winter in Costa Rica for all the reasons we’ve heard about—lost habitat, hunting, and climate change.”

"I’ve had the thought that if enough people could hear the beauty of this song, and come to value it as a treasure of the earth … to know that the only way their children and their grandchildren will ever know this treasure will be if we find a way to turn around this downward spiral of destruction.”

From somewhere in the church came a chorus of tweets, to which Winter knowingly raised his soprano sax and began to play. A rising wail from the instrument, and a bird seemed to answer right on time. Then they would disappear for a moment, and return with a grace and mercy on the human ear.

Other performances spoke volumes, pulling from the language of the past to speak right to the present. Performing from Anton Chekhov’s 1898 Uncle Vanya Yale School of Drama student Manu Kumasi transformed into the character Astrov, spinning words from over a century ago into a cautionary message for climate deniers and fossil fuel enthusiasts of today.

In the play, Astrov is living in 1890s Russia, about a century after the Industrial Revolution has swept the world and started the meter on climate change. But his words are so stinging, they could have been written at the turn of the 21st century, rather than the 20th.

“The woods of Russia are trembling under the blows of the ax,” Kumasi announced, his voice filling the church. “Millions of trees have perished. The homes of the wild animals and the birds have been laid desolate; the rivers are shrinking, and many beautiful landscapes are gone forever. “And why? Because men are too lazy and short-sighted to stoop and pick their fuel from the ground. Am I not right? Who but a senseless barbarian could burn so much beauty in his stove and destroy what he cannot create himself?”

The concert and Sept. 20 strike could not come, perhaps, at a more critical time. The year has felt like a climate siren on full-blast: in the spring, surging rivers upended rural communities in the Midwest, crippling farm and ranching economies in a preview of food and water shortages that have already hit other parts of the globe. Just weeks later, climate scientists reported the hottest June and July on record, with heat levels that were not predicted to arrive until closer to 2050.

There have been unprecedented forest fires in California, in Europe and perhaps most notoriously in the Amazon Rainforest. India, already subject to an unpredictable monsoon season, saw has seen some of its most severe flooding in 100 years. This month, Hurricane Dorian ravaged the Bahamas in a pattern of extreme weather than has become increasingly common (in the near future, climate scientists have predicted a worsening pattern, including up to six climate disasters taking place at the same time). 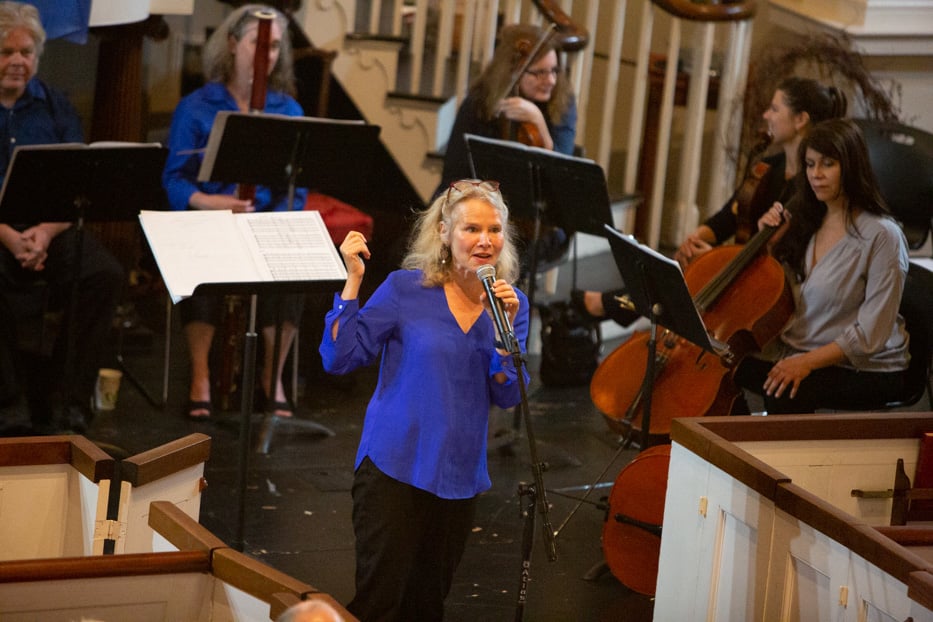 That’s the short list. On a longer one, cities in the U.S. and across the globe are sinking as sea levels rise, just one of the factors prompting mass shifts in global migration amid governments unready and unwilling to absorb those shifts. Last year, Tucker noted, Chubb Insurance Chairman and CEO Evan Greeberg declared climate change a “global existential threat,” noting the sheer amount of capital involved (and lost) in insuring properties that are increasingly more susceptible to extreme weather events.

Since 2007, the U.S. Department of Defense has listed climate change as a national security issue, citing rising sea levels as a direct and imminent threat to naval bases across the country and the globe. Why is that fact not front and center in the media, asked Tucker Wednesday.

It wasn’t meant as a rhetorical question. The sheer scale of the climate fight came full circle at the end of the evening, as Kuzma urged attendees to join in a second singing of “Simple Gifts” before ending the program on another selection from Appalachian Spring.

Before leading attendees in the hymn, she suggested that the song double as a call-to-arms, a reminder that “every voice counts, every voice matters.”

"So I encourage you to use that voice,” she continued, adding that activism could include showing up at a rally, flying less, or giving up meat once a week. “It’s up to you to go out there.”

The Global Climate Strike begins September 20. To find out more or get involved, visit its website. Find out more on the Yale Forum on Religion and Ecology here.