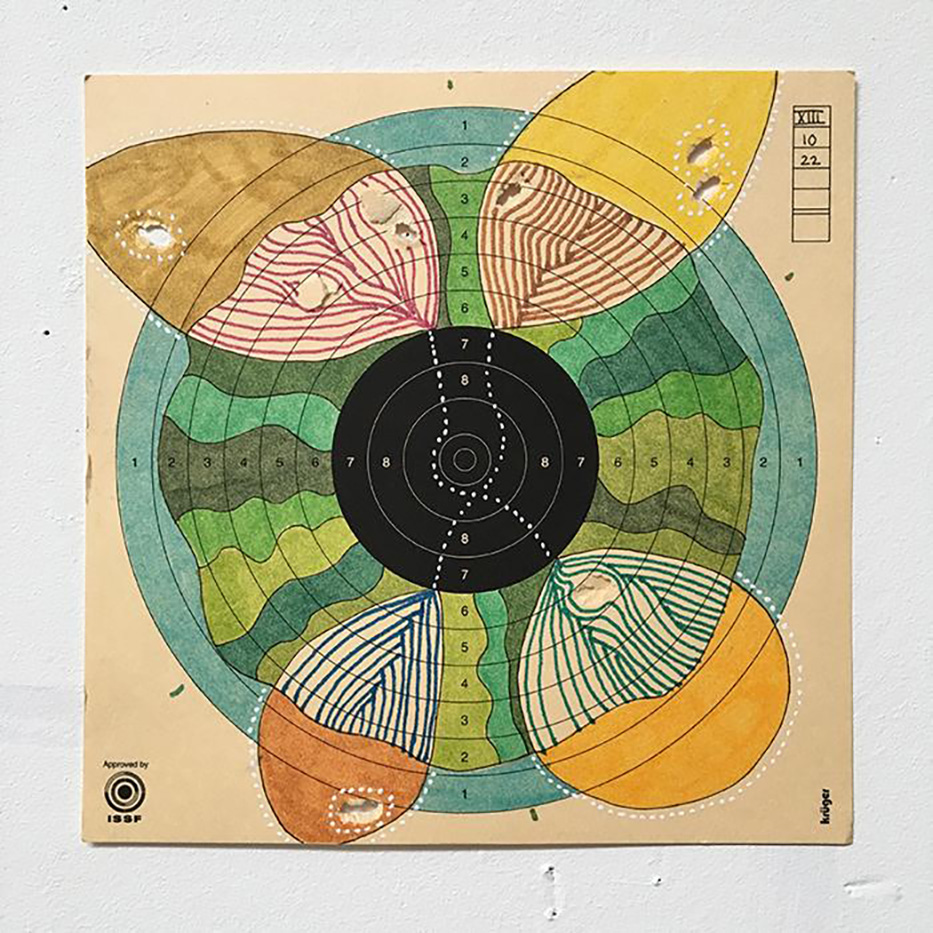 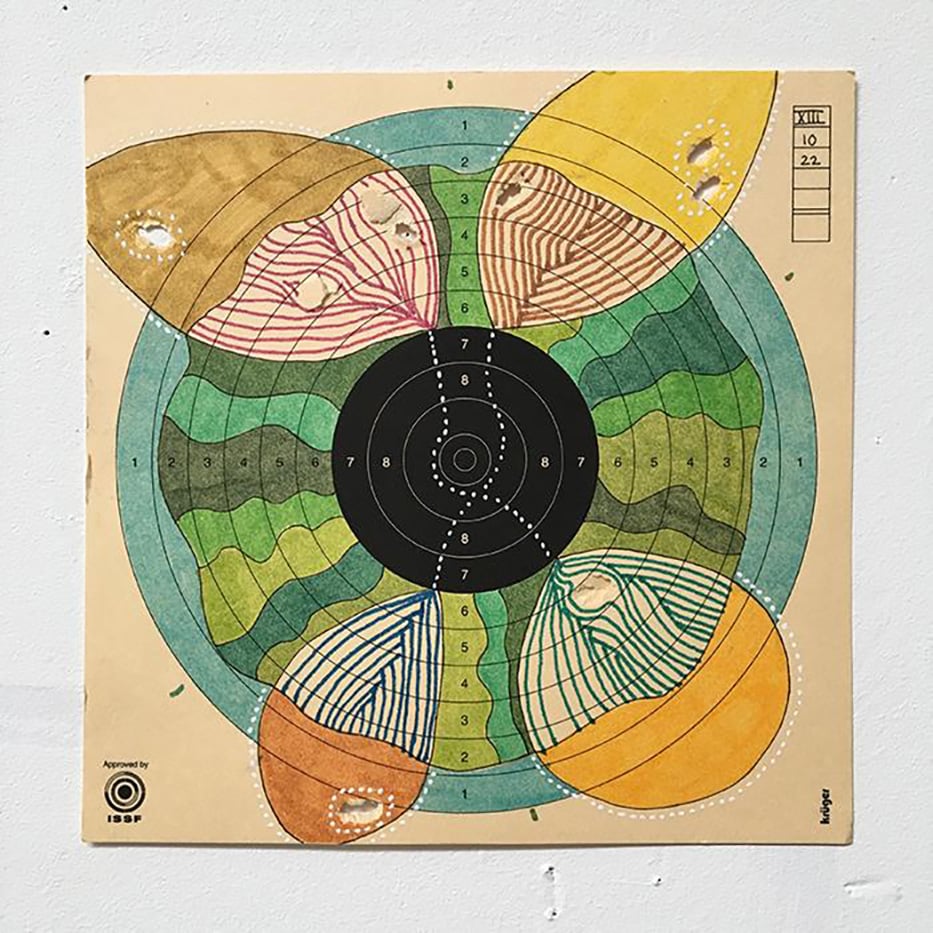 Two strings of holes criss cross one another on the bullseye paper. The ends of the lines connect to petals that cut across concentric circles, then out into the empty space beyond the circle. The bullseye, the perfect 10, remains intact. Beside it, Barbara Marks’ four other bullseye targets are filled with vibrant lines and shapes. All miss the obvious mark but find other, more interesting spots to land.

“A flat file physically contains a finite amount of flat artworks within its metal drawers,” reads an accompanying text. “There are constrictions and limitations on space: one is required to be selective regarding what is housed inside.  It is a microcosm for artworks at a specific scale – generally under twenty-four by twenty inches.  With a keen awareness of their mediums, the artists selected to share this structure offer a measure of their greater individual practices.”

Wedged between artworks,  a plaque welcomes onlookers into the show with the definition of a modicum—a “small quantity of a particular thing, especially something considered desirable or valuable.”

The works reflect a scale and attention appropriate to the definition. In Krauss’ 2020 Splitting, pastel-colored cells split endlessly. Some of the cells are tightly clumped with the smallest of cells fighting to squeeze out and grow. In the adjacent piece, murky blue cells fill up a freer space with an almost leisurely appeal. 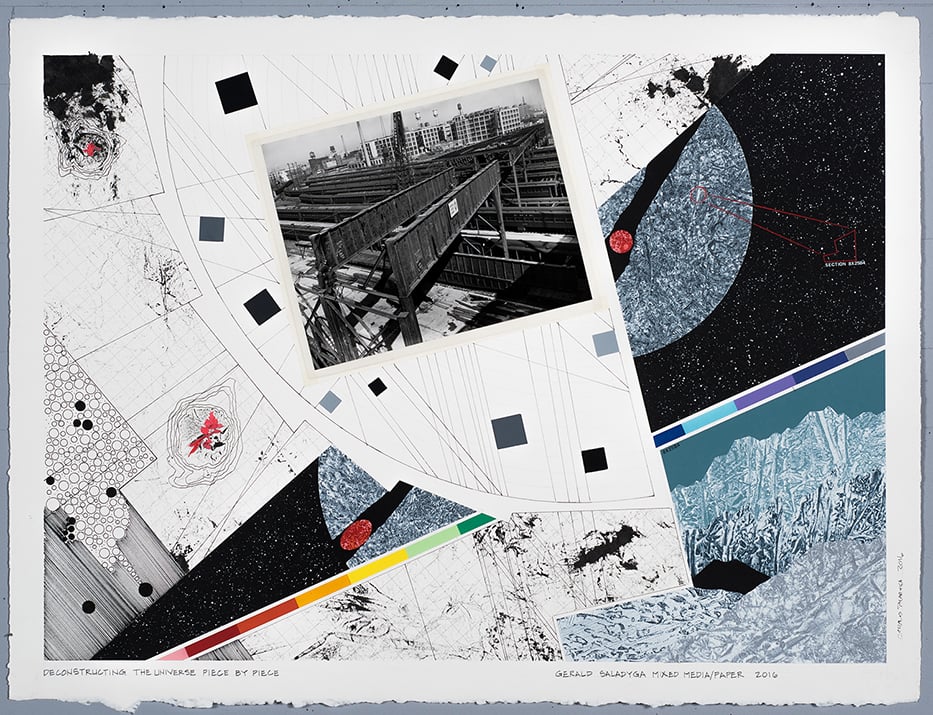 Deconstructing the Universe Piece by Piece by Saladyga. Photo courtesy of Artspace.

Gerald Saldyga's Deconstructing the Universe Piece by Piece juxtaposes black and white photos of city infrastructure against a starry night. Almost schematic in its approach, the piece shows layers of a universe as they are peeled apart. Pull back the starry night sky, only to find the faintest of lines exploding in all directions. Those lines run into topography, a wooden texture, or landscape resembling polar ice caps. The white background pushes each fine colorful circle or square detail to the surface, leaving nothing to hide.

In another piece by Saldyga, Locating the Center of the Universe, a rainbow has an organized chaos not apparent at first glance. The red and orange lines run parallel to one another, intersecting with the purple and blue lines that also run parallel to one another. Akin to Marks’ question of centers, almost none of the lines ever cross through any of the brightly colored circles scattered throughout the piece. Instead, the circles are placed on orbits of their own.

More recognizable forms pop up in Lerner's 2020 Untitled, a photo of a flower bed in which  the flowers are out of focus. Instead, the often overlooked surrounding foliage—broken twigs, weeds, and droopy leaves—all come through. It emphasizes how the surroundings of the flowers contribute to their beauty.

Most of the works are on the smaller side—less than two feet by two feet—so they sparsely populate the walls of the gallery. They  require viewers to search for them and appreciate them in a more intimate context. Even more intimate is Artspace's flatfile cabinet, tucked into the corner but very much a part of the show. Under Dent's leadership, Artspace has reimagined the flatfile to hold fewer works at any given time, and make itself more accessible to viewers.

The metal cabinet will house flatfile works from 10 artists per year, and can be accessed by viewers in the gallery. It's an invitation to to interact with the work and engage in close looking. Next to the cabinet are a table and chairs for viewers to sit with the works and study past works by artists.

It's a more interactive approach that lends itself well to students in Artspace’s new Drop in Drawing program. The program is open to New Haven students in grades 8 through 12 on Wednesday and Thursday at 3 p.m. through June.