At Artspace, Artists Unite Past And Present 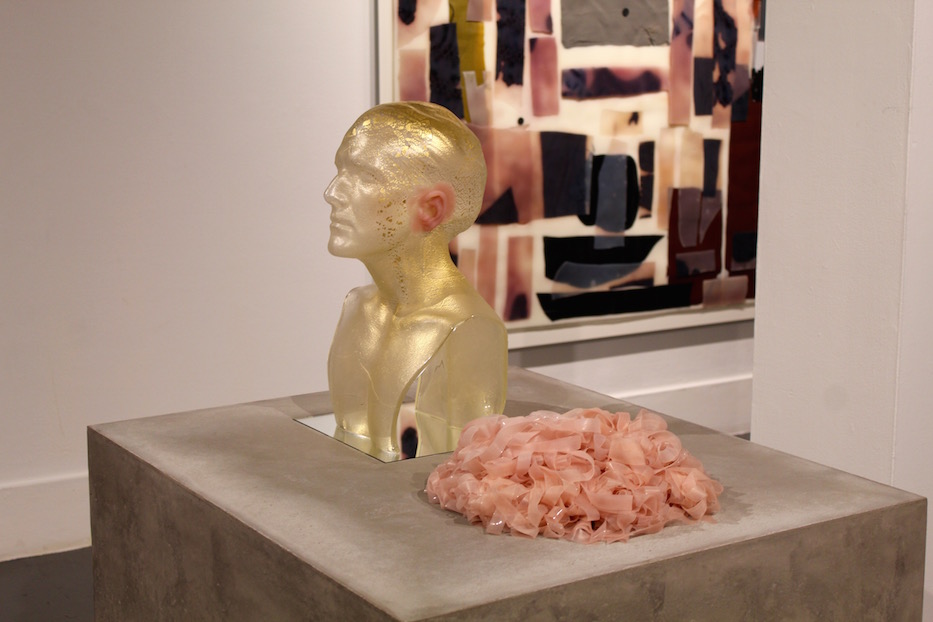 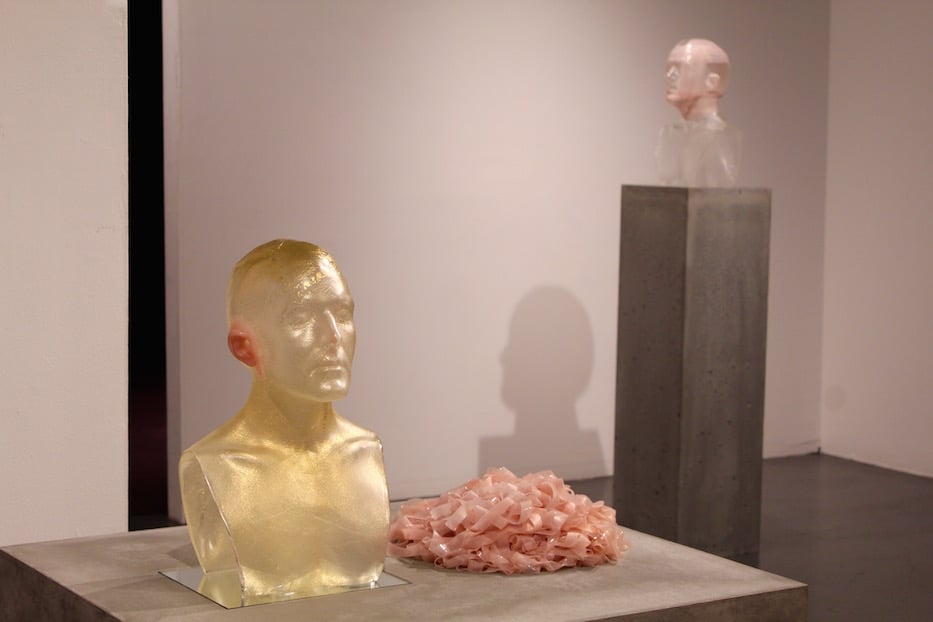 Martha Friedman's work is in conversation with the history and process of mummification. Lucy Gellman Photos; all work by the artists.

One translucent, hollow bust is wrapped in strands of shiny pink rubber, revealing only the pale eyes, nose, and mouth. Another is covered in delicate gold leaf and sits beside a pile of the same pink rubber, now thick and twisted like candyfloss. Both are displayed on concrete pedestals, one of which even towers over the viewer and demands that they look up, subjecting their body to the art.

Martha Friedman’s busts are part of Everywhere and Here: Artists Respond to the Yale Peabody Museum of Natural History Collection. Running at Artspace New Haven through Nov. 20, this group exhibition includes the work of artists Friedman, Anina Major, Brittany Nelson, Cauleen Smith, and Tuan Andrew Nguyen. All have made work in conversation with objects at the Yale Peabody Museum, which is closed for renovations through 2022.

Though the Peabody Museum is currently closed to the general public, the artists commissioned for Everywhere and Here were given special access to view the Peabody collection, work with curators, and present the original objects in the exhibit alongside their artwork. Just as the Peabody Museum contains a diverse set of artifacts, the installation contains a diverse collection of media, from sculpture to mixed-media to videography. 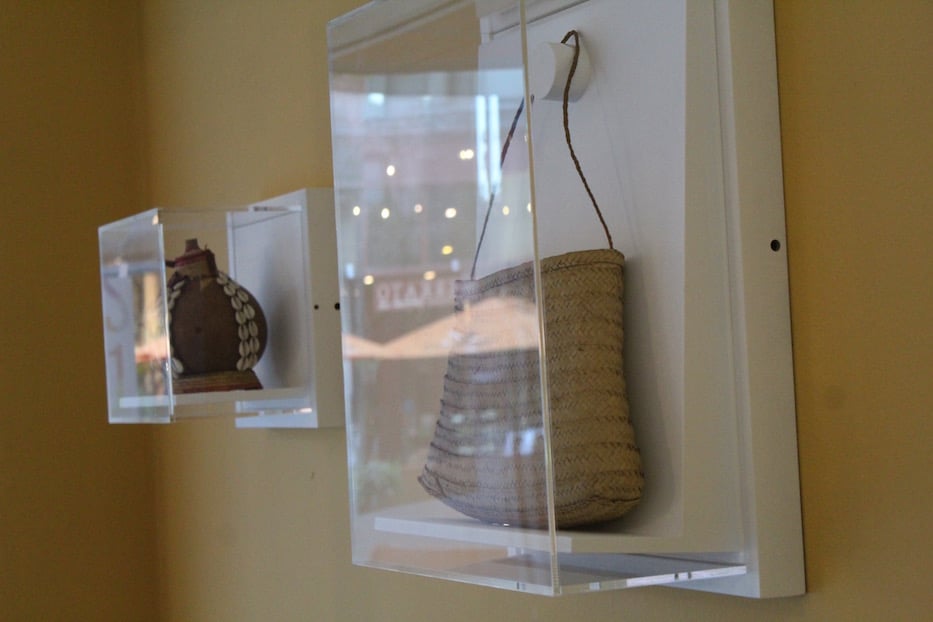 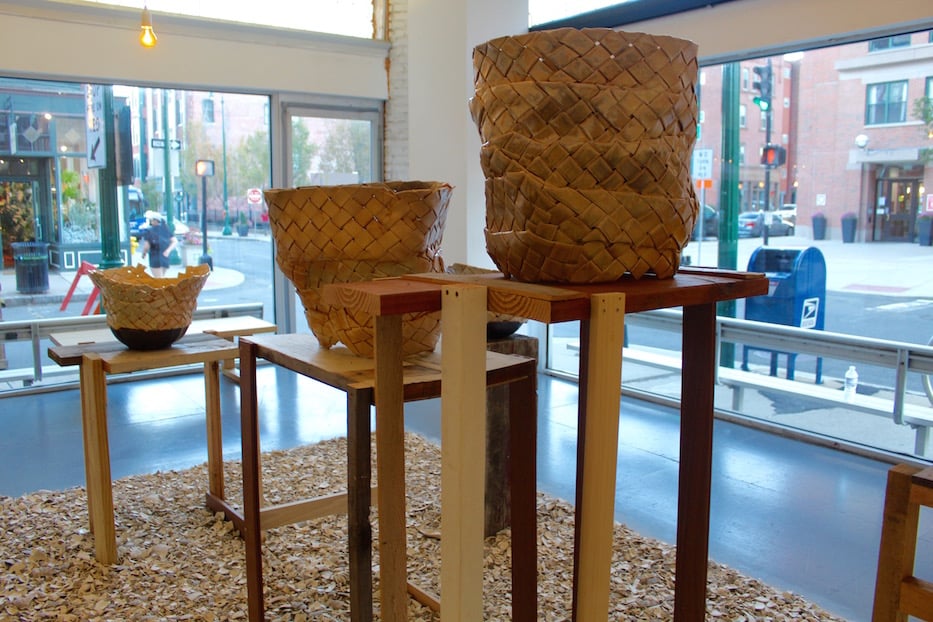 Near Artspace’s Orange Street entrance, Bahamian-born Major draws on her previous work with clay sculpture to make sculptural, ceramic baskets for Everywhere and Here. Inspired by Peabody Collection objects such as a clay shard, a flat woven basket, and a gourd container covered in raffia and cowrie shells, Major unites the distinct objects and materials in her installation. The work is reminiscent of prior pieces that she has done, including in installations such as Plait and Strawdolls.

Major weaves together strips of clay to make finely crafted, oversized baskets that are striking fusions of her inspirations from the Peabody Collection, the clay shard and flat woven basket in particular. The baskets form organic, layered, and unexpected shapes against the bright yellow walls of the exhibit. Shards of shells reminiscent of the Peabody Collection’s clay shard cover the floor of the exhibition, so that the floor resembles a beach.

Creating an immersive experience for the viewer, the exhibit is an entire landscape. Passers-by on Orange Street can see the sculptures through the expansive front windows of Artspace’s building, indicative of Artspace’s goal to bring art into the larger Ninth Square neighborhood and New Haven community. 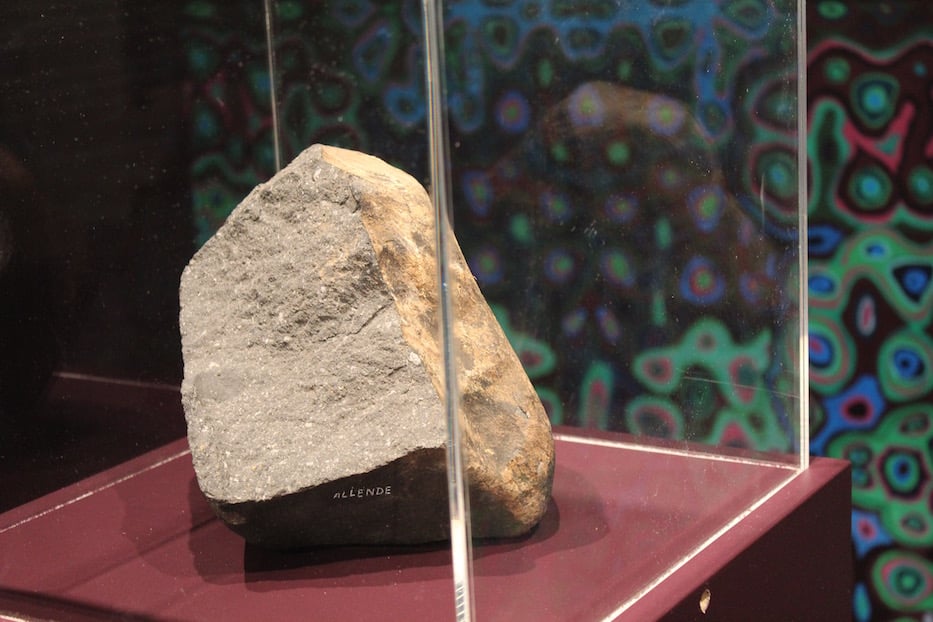 Deeper into the gallery, work from other artists awaits. An animistic mask from the Peabody Collection is immediately visible from the entrance of the alcove where Tuan Andrew Nguyen’s videography project is installed and screening on loop. Nguyen, a sculptor and videographer based in Ho Chi Minh City, aims to “extract and re-work narratives via history and supernaturalisms” in his video projects. These goals are evident in Nguyen’s installation for Everywhere and Here.

Inside the alcove, one video shows a series of animistic masks against a futuristic backdrop. Across the alcove, a second video flashes between footage of masks used in an Indigenous ritual and masks used in a more modern, menacing ritual—the presence of militarized police at urban protests.

When seen one after the other, the ceremonial masks and police masks look eerily similar. B are decorated, fortified, and intended to hide the wearer’s identity—but for strikingly divergent ends.

In the video, police wear masks to commit extreme violence against people protesting state incursion into Indigenous land to develop pipelines and other invasive infrastructure. Nguyen’s project suggests that the masks police wear are a profane imitation of the original animistic masks found in the Peabody Collection. 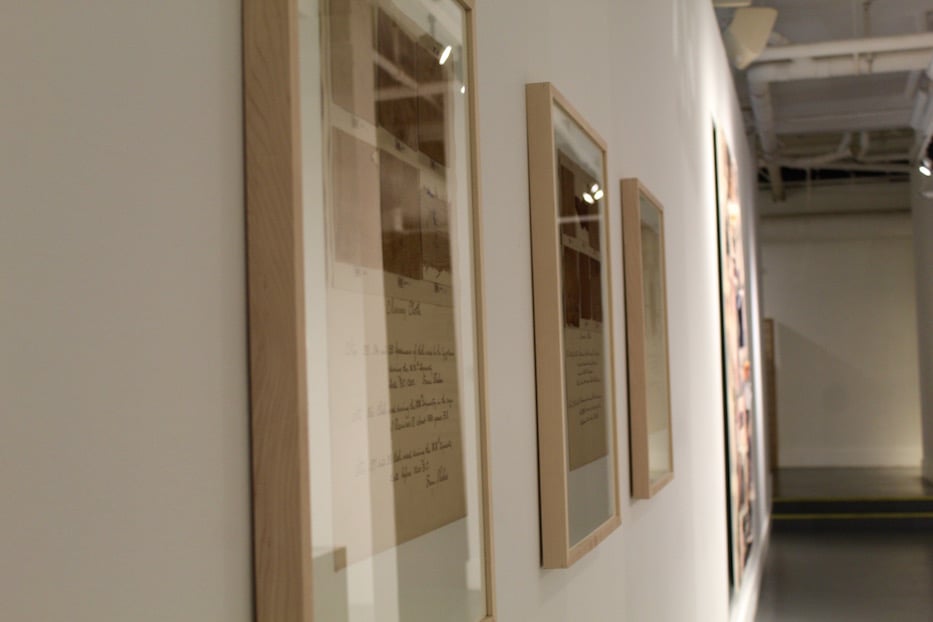 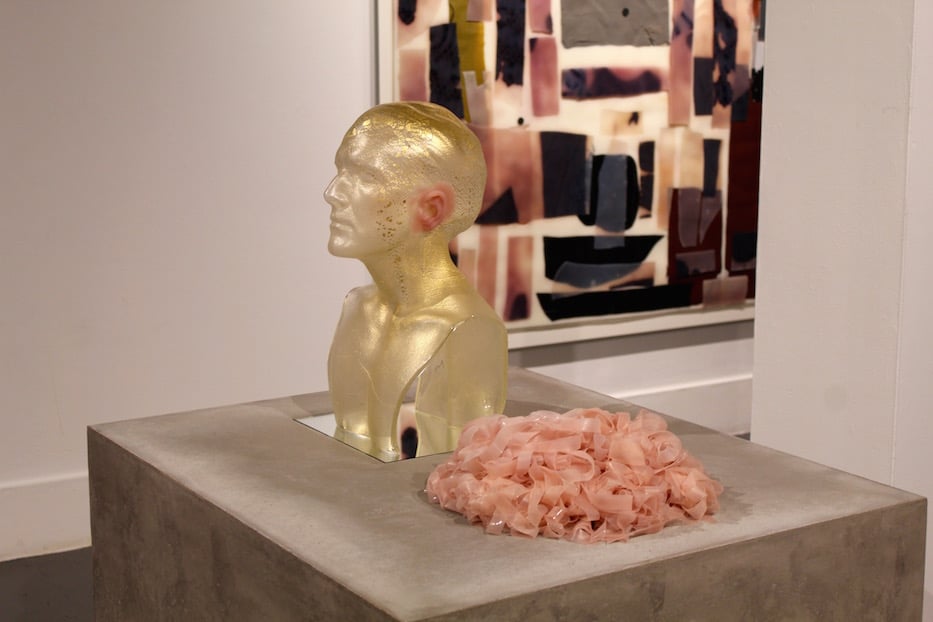 Top: Framed scraps of “Mummy Cloth” from the Peabody Museum. Bottom: One of Friedman's busts.

Martha Friedman’s busts are similarly concerned with human faces and how they can be concealed. Carefully wrapped and bound in pink and yellow rubber, they resemble ancient Egyptian mummified bodies, wrapped and bound in cotton. This link between modern and ancient, rubber and cotton, is not merely theoretical but integrated directly into the exhibition, as framed scraps of “Mummy Cloth” from the Peabody Museum archives hang on the walls of the gallery.  Carefully organized by dynasty and date with an elegant script on cream paper, the pieces of “Mummy Cloth” are treated like works of art themselves.

Friedman’s work raises questions of value, sanctity, and ownership. For one, who do people value and try to preserve after death across times and cultures? Who collected the cloth from the bodies of a king in the VI dynasty, a gazelle, and an ibis, so it could be part of the Peabody Collection? Who truly owns those objects?