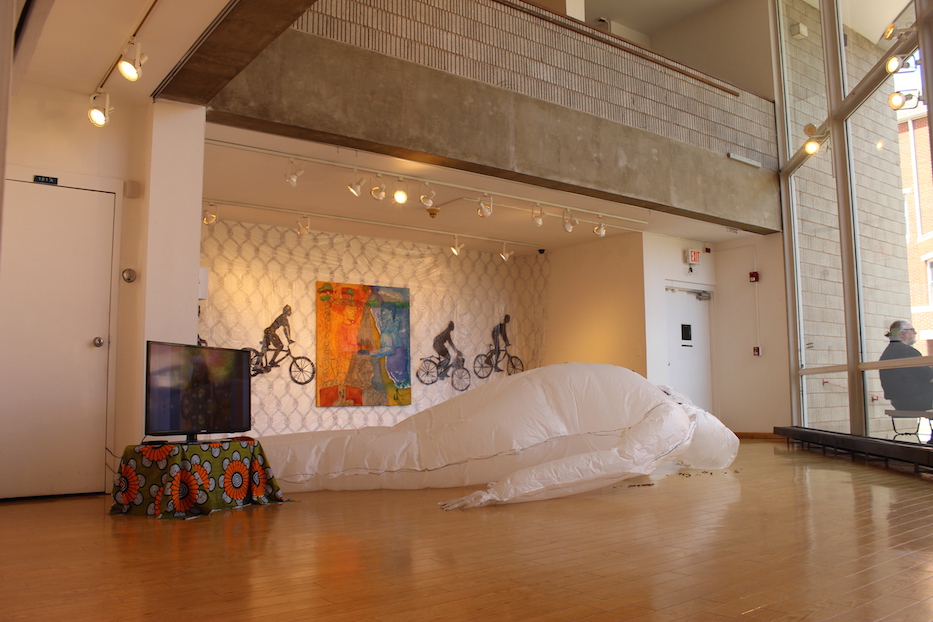 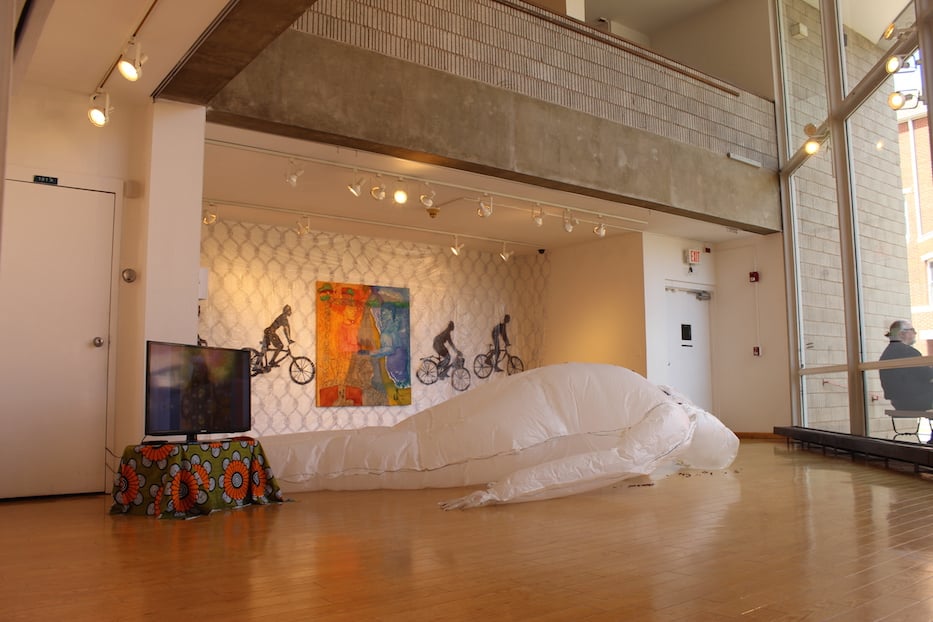 Al Larriva-Latt Photos. All work by the artists.

An inflatable plastic form lies inert on the lower level of the gallery at Creative Arts Workshop. It is white, featureless, and massive, with limbs, arms, and a head. On the back wall, there is more plastic; inexpensive sheeting drapes from the ceiling to floor. With black magic marker, the artist Moshopefoluwa "Mosho" Olagunju has scrawled a sprawling network of nooses upon it. Captivity and death waft from the plastic.

Superimposed onto the plastic sheeting, a platoon of Black people on bikes surge forward, front wheels pointed toward the front wall of the building. They move as a unit, away, into the future.

Olagunju’s work captures the viewer’s eye in Reshaped | Refocused, a sci-fi, Afrofuturist exhibition in dialogue with Octavia Butler’s classic novel Parable of the Sower and the International Festival of Arts & Ideas’ “One City, One Read” initiative. The exhibition ties together the work of the three emerging Black artists—Greg Aimé, Amira Brown, and Olagunju—to comment on the twin and intertwined crises of racism and environmental collapse, and the imagination and creativity needed to overcome them. 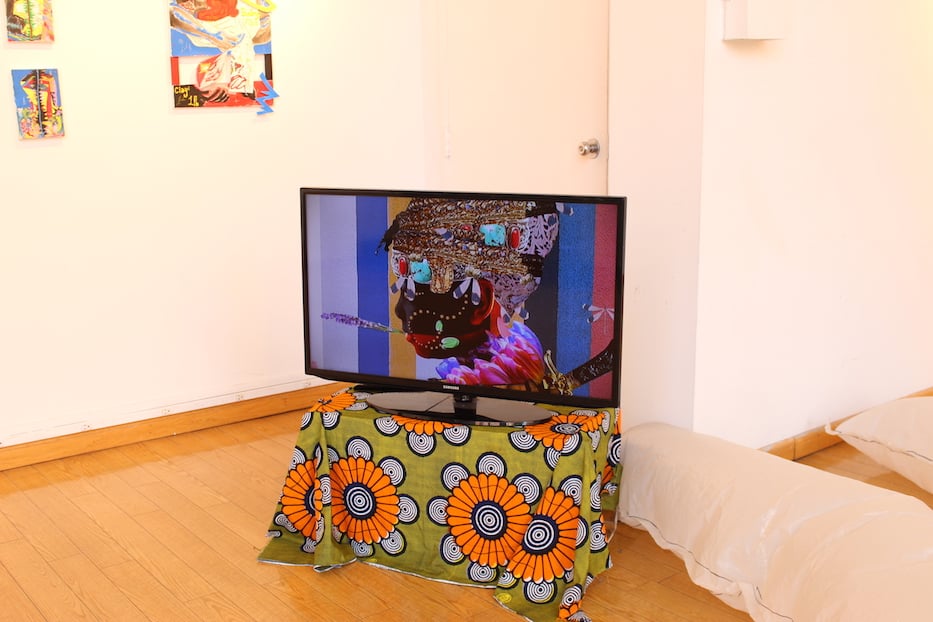 Work by Aimé in the show.

The exhibition runs at Creative Arts Workshop (CAW) on 80 Audubon St. from June 10 to July 9. It is curated by CAW Program Director Reggie Woolery. In addition to the Festival, collaborators include the New Haven Free Public Library and Yale Schwartzman Center.

“Using materials and processes both experimental and familiar, the artists in Reshaped | Refocused reflect and recast their own notions of containment, presence, and freedom,” Woolery writes in the exhibition brochure.

Parable traces the development of  Lauren Olamina, a hyper-empathetic and spiritual Black teenager. In the midst of climate disaster, violent class struggle, and a multitude of other crises, she flees her Southern California community. With a band of others, she treks to Northern California, where she seeks to spread the Earthseed religion and, eventually, initiate the settlement of humans on other planets. For Lauren, another future is possible–it simply needs to be imagined first.

The artists were given a two-month period to produce work based on the text, during which time they participated in conversations with Woolery and with each other. Woolery encouraged the artists to engage with Parable conceptually, rather than illustrate it. All of the work is new, with the exception of the two plastic pieces that Olagunju created for his 2022 undergraduate thesis at Bard College. 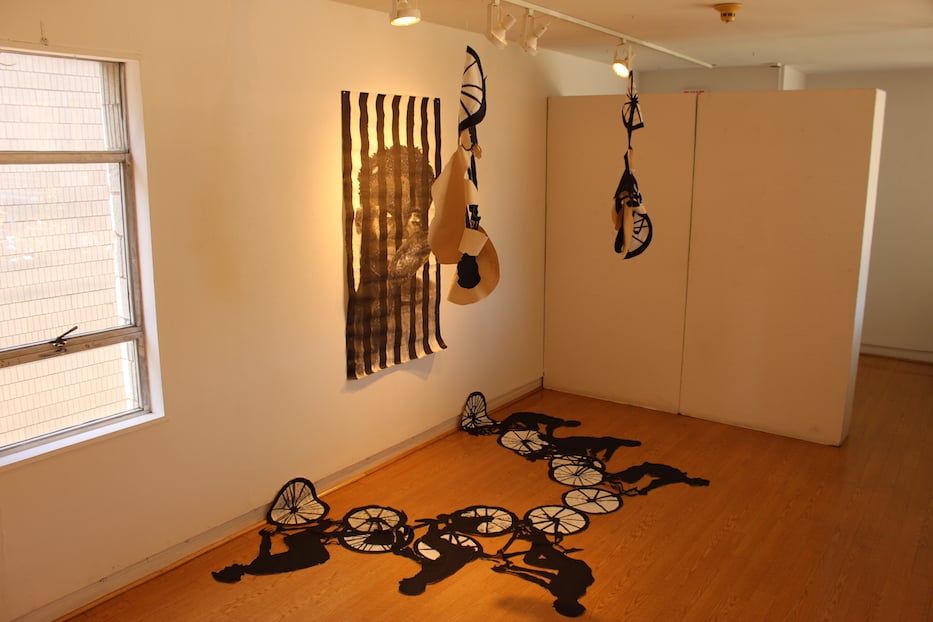 On the upstairs floor, Olagunju again refigures the human form.

On the upstairs floor, Olagunju again refigures the human form. Six paper silhouettes of people biking have been arrayed in an arc on the floor. Two others hang from the ceiling. The suspended paper forms loose coils, taking on a new density, mass, and dimensionality. Given its propensity to wrinkle and furrow, paper is an especially evocative material for this display.

The hanging bodies impede the viewer’s movement to the centerpiece “Stars and Stripes,” a multi-toned black and gray portrait of a Black boy. Head cocked to the side, he gazes beyond the vertical stripes that pin him to the painting. Budding from the skin of the boy’s hand and gathered in the strands of his curls are two galaxies. Within these galaxies, stars rove, burn, and expand—and new possibilities emerge.

And yet to view this future germinating within the boy, one must stand in communion with these hanging bodies of paper, acknowledging their presence. This sense of possibility co-exists with that of confinement and death; they are intertwined.

Aimé's work, which employs the help of the Artivive app.

Aimé carries on this theme of confinement. His work engages multiple realities, both physical and virtual, with the help of the Artivive app. Four notebook-size digital collages hang on the second floor, including portraits of mythical and real-life people. When the viewer opens the Artivive app and points their camera at a collage, the visual data of the painting serves as a QR code that launches the viewer into an imaginary, virtual realm.

“Venus Rising,” a portrait of Venus in profile, is a pastiche of cultural references. Venus is donned in gold-plated armor. The edges of each individual plate are scalloped, recalling archways from Islamic architecture. Her helmet—crisscrossed with tiny ornate gold curls—evokes a Medieval chainmail headdress, like the one pop star Doja Cat wore on Instagram Live in 2020. On her back is a jetpack with dual engines, a callback to the Star Wars Mandalorian character. For Aimé, the future seems to reside in this mix of ancient and pop culture.

In the virtual realm of the Artvive app, the imagination is unleashed. “Venus Rising” animates from a still image into a video. The video zooms into a battalion of angels at her side, pistols in hand, aimed toward the heavens. The clouds rise and fall around her head, gathering momentum, and the translucent bubbles surrounding her head glimmer. 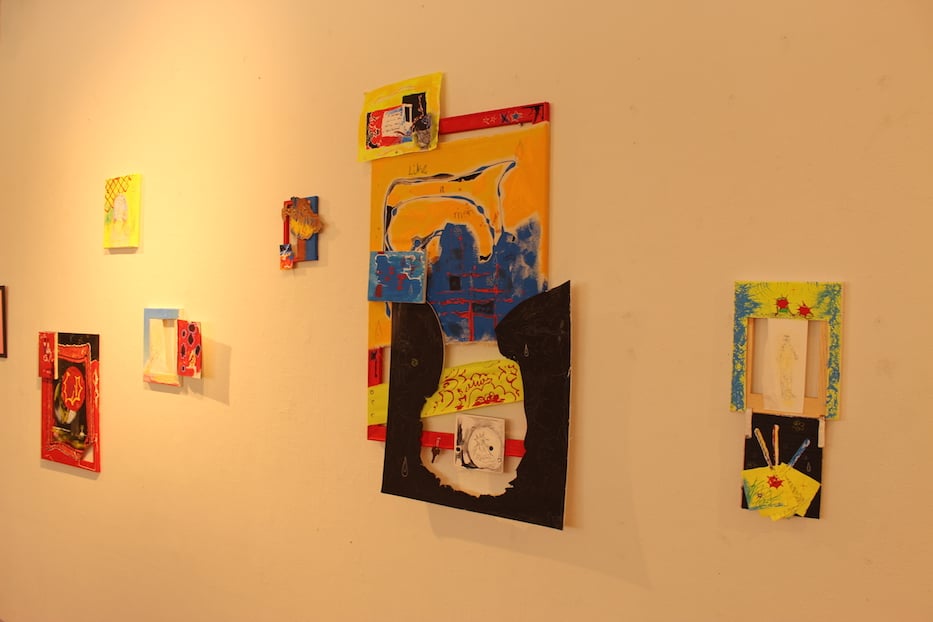 Brown: "You're left reeling, you’re just like, where am I?”

The potential energy within the still images ties in with Brown’s work, which addresses themes of potentiality and Blackness.

Parable was the second work of Butler’s that Brown had ever read. (They first read Kindred on recommendation from her twin sister, who is also an artist.) Before reading Parable, they'd just completed a series Darkstar I, which centers a young, Black, female character named Darkstar.

They were shocked by the parallels they discovered between Darkstar and Lauren, the Parable protagonist.

Both characters were Black young women, brimming with potential energy, on the brink of release. 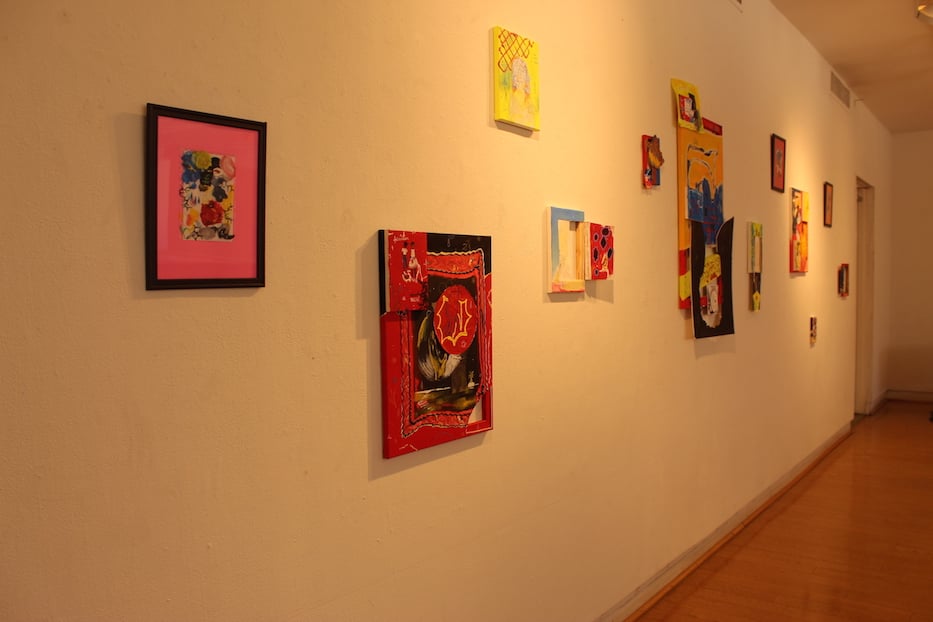 One of Brown’s most eye-catching works is “A fire (Lauren).” She takes an additive approach, building onto the wood frame with a mix of media—raw canvas, foam core, cord, and lined notebook paper—to create an expansive surface that ruptures the boundaries set by a conventional frame.

The result is an expansive space with tears and ruptures. Only three-quarters of the raw canvas is present; one-quarter has been cut from the fame. A silhouette profile of Lauren’s back, shoulders and face extends beyond the top edge of the frame. Chin aloft, shoulders held back, she gazes ahead, into futures of her own imagining. Yellow flames flick from the edge of her silhouette–she is the spark, the source of change.

Yet this silhouette is created by cutting Lauren’s shoulders and head out of the foam core. The top-most portion of her head, where the brain lies, is empty space. The rest of her body is filled in by a bottom layer of canvas. Presence is a mix of emptiness and filled space.

This ties back to Brown’s focus on potentiality, which they define as “the ability of something to have more than just what is immediately connoted.”

A walkthrough of Reshaped / Refocused leaves the viewer in this liminal space, where sci-fi imaginings, community resilience, and Blackness point the way forward.