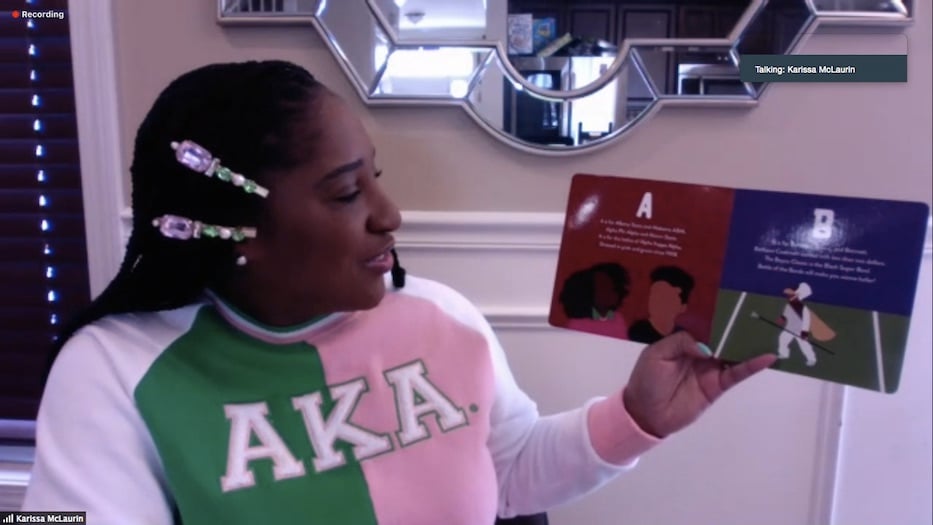 Karissa McLaurin was well into The ABCs of HBCUs when she turned to a vivid image of blue and white that marked the letter S. In the center of the page, two women stood at a table, their hands almost touching. One wore her hair out, curls cascading down her shoulders. The other wore hers fixed in braids with dainty blue beads at the ends. Both lifted one arm, as if to wave hello.

“S is for Sigma Gamma Rho and Step Shows, Savannah State and Southern are Second to none,”McLaurin read, keeping one eye on the camera and one eye on the book. “Such a Sacred Sisterhood at Spelman College, Serving ‘Black Girl Magic’ since 1881.”

Wednesday, McLaurin was one of several readers to take World Read Aloud Day online at Roberto Clemente Leadership Academy, as teachers and students brave a second year of learning amidst the Covid-19 pandemic. Across the city, the New Haven Public Schools (NHPS) Literacy Department transitioned to pre-recorded videos, Zoom rooms, and Google Meet setups for the day. Watch some of those here.

While elementary schools have reopened, the district reserves Wednesdays for deep cleaning, meaning that all students learn remotely one day per week.

“I think it’s important to continue—one, because we can do it as a whole school community,” said Cara Cuticello, a literacy coach at Clemente who organized the school's event. “And two, as a leadership school, it’s a way to get community members and leaders into the school to talk to the students about who they are and what they do.” 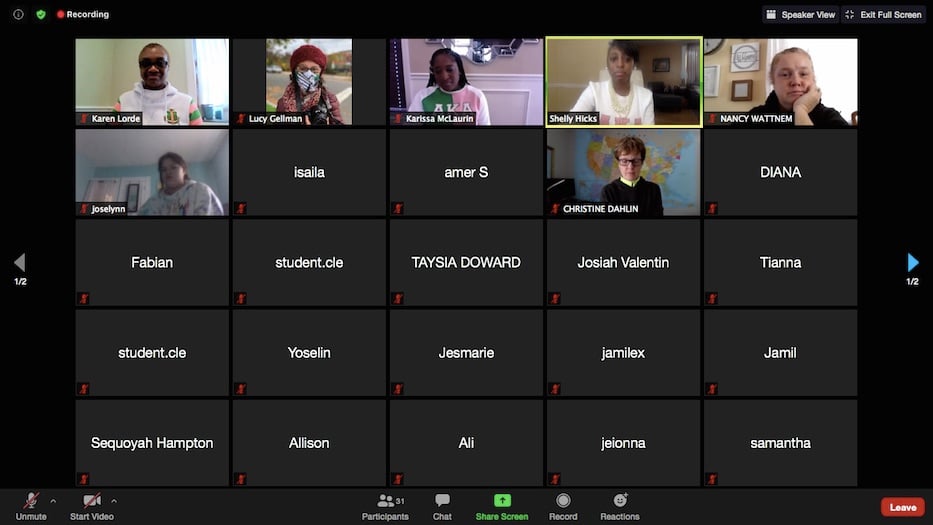 For years, the day has been a sacred one at Clemente. When classes are in-person, the school chooses a theme and turns it into an all-out celebration of literacy. One year, teachers dressed up as Dr. Seuss. Another, the school did a tribute to One Hundred and One Dalmatians, down to a principal who dressed as Cruella De Vil. As the school made the virtual pivot, Cuticello enlisted the help of fellow teachers and administrators to bring in fellow New Haveners.

One of them was math coach Karen Lorde, a 10-year NHPS veteran who is also a member of the  Theta Tau Omega Chapter of the Alpha Kappa Alpha Sorority, Incorporated. During a staff meeting, Lorde suggested that she could enlist two of her sorority sisters, both of whom are graduates of the city’s public schools. She called it a chance for students to see mentors who look like them, in a district where almost two-thirds of educators identify as white.

“I thought it would be really motivational, because they are both college educated career women,” she said in a phone call Wednesday afternoon. “There is something to me when students are able to see people like them. They can relate. And because they can relate, they’re more engaged.” 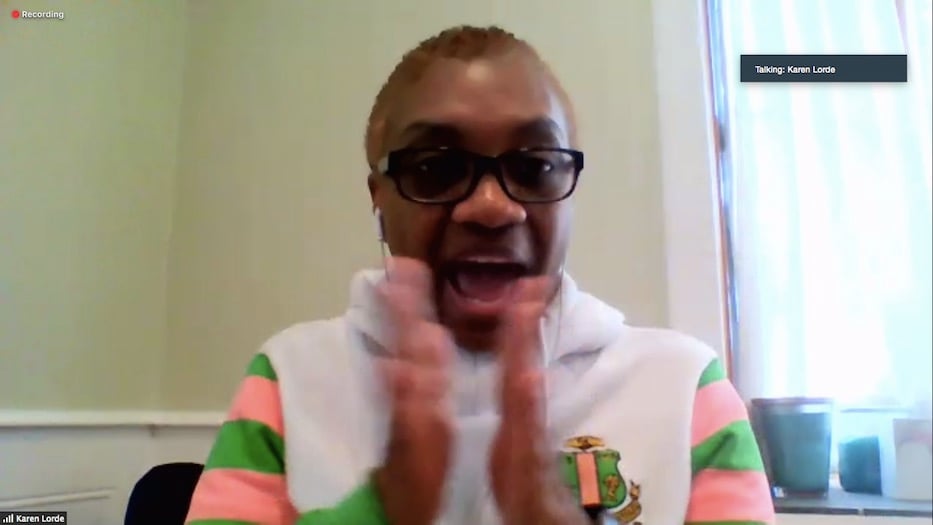 Lorde led students in a round of applause after both books.

Wednesday morning, McLaurin and fellow AKA Shelly Hicks appeared in sweatshirts emblazoned with sorority’s logo in light pink and deep green. As dozens of sixth graders logged into Zoom, Lorde welcomed them, upbeat as she described World Read Aloud Day. Only a turned their cameras on, bedrooms, desks, and remote learning setups shifting into focus.

McLaurin smiled into the screen and opened to the first page. Two jewel-toned barrettes in her hair gleamed pink and green.

As she read, the letter “B” was no longer relegated to “boy” or “bear,” but to Bennett and Benedict Colleges, Bowie State University, and the beloved battle of the bands that “will make you want to holler,” she read. “J” was no longer for “jump,” but for the 80 percent of Black judges who graduated from an HBCU, including the former U.S. Supreme Court Justice Thurgood Marshall. By the end of the book, her voice rang over the screen as she noted that HBCUs were initially formed “while reading while Black was a crime.”

“That was a good story,” piped up a sixth grader named Amer, his camera still off.

As an NHPS grad who is now a research associate in psychiatry at Yale New Haven Health, McLaurin said she takes any opportunity she can to let kids know that HBCUs are an option for them. After growing up “all around the world” with parents who were in the military, she graduated from Hill Regional Career High School and attended Albertus Magnus College for both her undergraduate and graduate degrees.

While she was at Career, she said, no one told her that attending a historically Black college was an option. She wishes they had. Her husband is a graduate of Howard University, where the sorority was founded in 1908. Her sister is a graduate of Virginia State University. She delighted in the book when she found it for her young son, who is now three years old.

“I don’t think people realize the benefit that HCBUs have,” she said in a phone call Wednesday afternoon. “I’ve spent a lot of time on those campuses, and it’s just like, you can be anyone you want to be. You can be your authentic self. You don’t have to hide your Blackness. Whereas I feel in other environments and other schools, you kind of have to shelter who you are.”

She also considers reading and literacy part of being an AKA, she added. The sorority offers mentoring programs to high school students, spearheads scholarship programs, and takes them on HBCU college tours. Last September, Alpha Kappa Alpha, Inc. raised $1 million for HBCUs over 24 hours for the third year in a row. Before this year, she joined World Read Aloud Day in person with members of the Yale African American Affinity Group (YAAA). 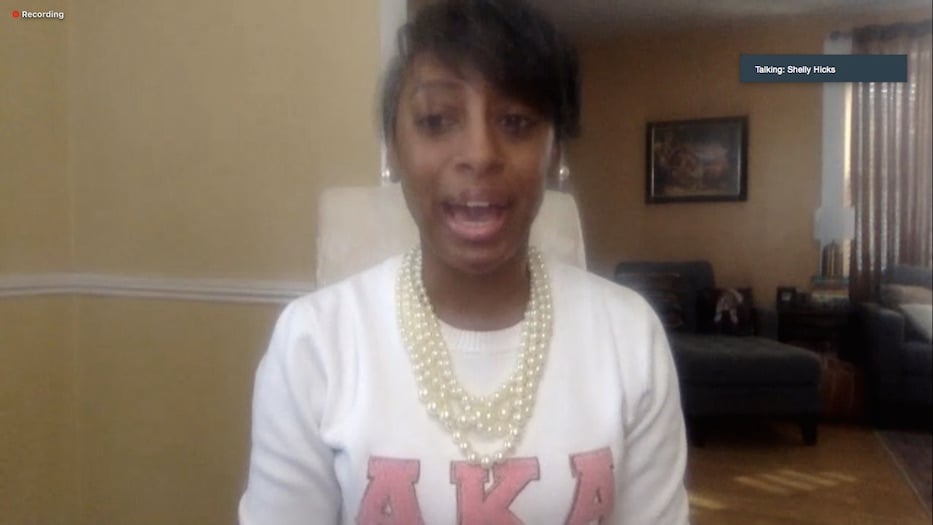 No sooner had she finished than Hicks opened her copy of Langston Hughes’ 1958 Thank You Ma’am, set in Harlem in the middle of the twentieth century. In the story, a young boy tries to rob an older woman of her purse, because he wants to buy a pair of blue suede shoes and does not have the money.

The woman—Ms. Luella Bates Washington Jones—holds on to both her pocketbook and to the boy. After giving him a swift kick in the rear, Jones takes him home, lets him wash up, and feeds him dinner and dessert. At the end of the evening, she gives him money to buy the shoes. He never sees her again.

As she read, Hicks beamed through her screen, her eyes bright and knowing as the story unfolded. A string of pearls glinted from around her neck. When it was Jones’ turn to speak, she raised her voice to take on the character’s cadence. Then she lowered it, soft and smooth.

At least one student jumped into the chat to let her know that he was following along. Others unmuted themselves for questions as soon as she had finished.

“Did the lady pass away or something?” asked sixth grader Desire Gee.

“If I think about it, I think she just wanted to be kind,” Hicks responded.

“So you can use your imagination too,” added Amer. “If I use my imagination I say, no, the lady was tired, she just probably wanted to go to bed.”

Lorde hopped back into the conversation. When she imagines the end of the story, she said, “he moved away, he went to high school, he graduated, he went to college. He went to a Historically Black College.”

Hicks sees the day as a way to give back, she said after the event. Born and raised in Newhallville, she is a proud product of the city's public schools, from Lincoln-Bassett and Bishop Woods all the way through James Hillhouse and Cooperative Arts & Humanities High School. In the years since, she has become a vocal advocate for school choice.

She said that she loves World Read Aloud Day, in no small part because "literacy is the foundation for everything." In her previous work as director of communications and community relations at Highville Charter School, her favorite part of the job was coordinating readers for that same date every year.

“They [students] would see people who looked like them,” she said. “Representation really matters. They’re not just reading to the students, but also having conversations with them.”