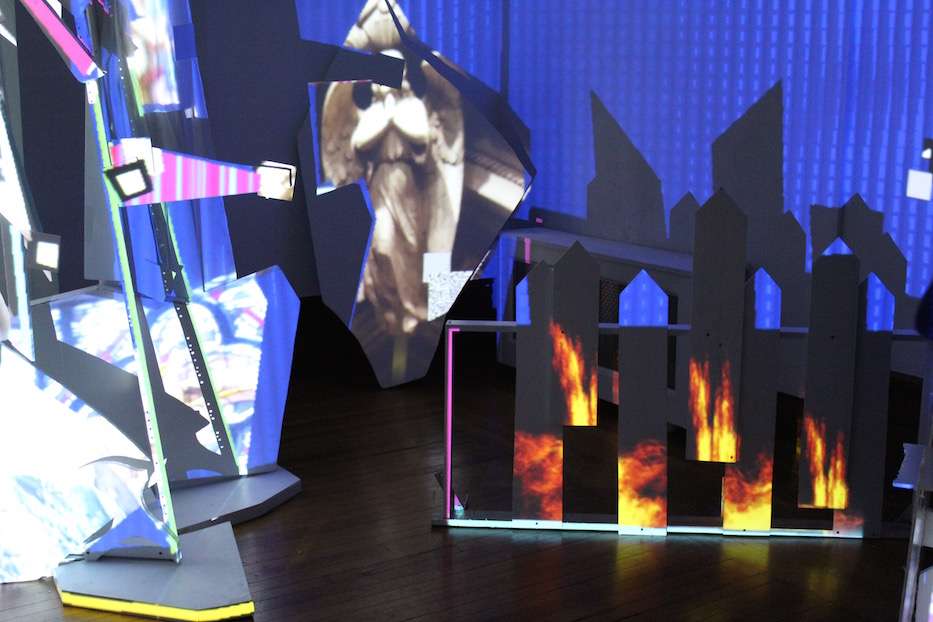 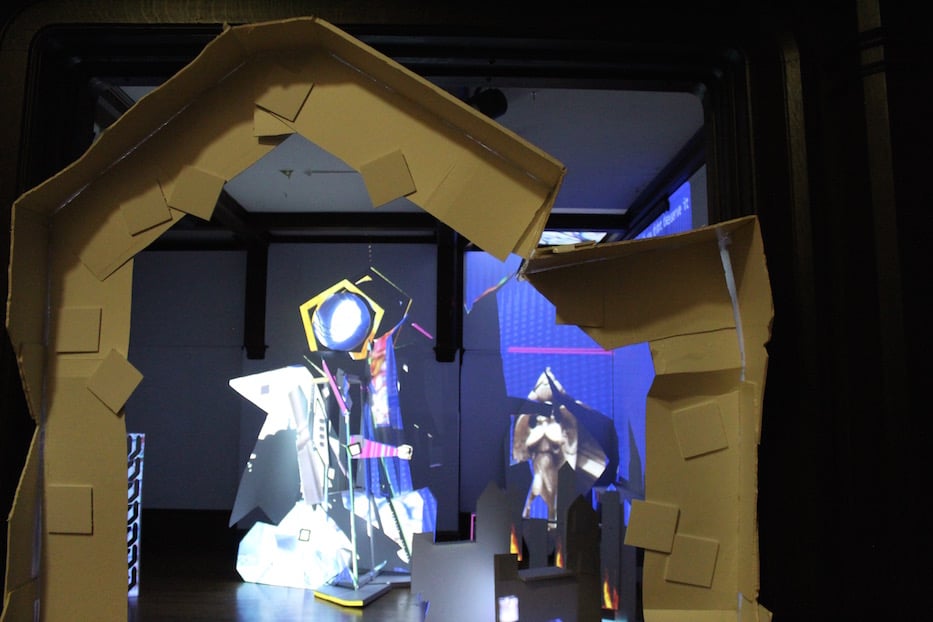 On a dark Thursday afternoon, bright lights welcomed visitors to a “church” with larger-than-life sculpture, video, and text. On the floor and walls were the various furnishings of a traditional church—from the altar to the prayer candles, confessional booths, and stained-glass windows. Video clips with carved stone angels and flickering flames brightened the room. The words Everyone’s guilty of something appeared projected on the wall.

The installation is one of four in Technically Real, a group show from students at the Educational Center for the Arts (ECA) now on view at the Ely Center of Contemporary Art. Thursday, students opened the show to an audience of parents, peers and community members. It runs now through Dec. 19; hours and more information are available here.

“Because [our class] has this luxury of being together for three hours a day, four days a week, we're able to seriously hammer in these crazy things that don't even seem like they could happen,” ECA faculty member Willie Stewart said. 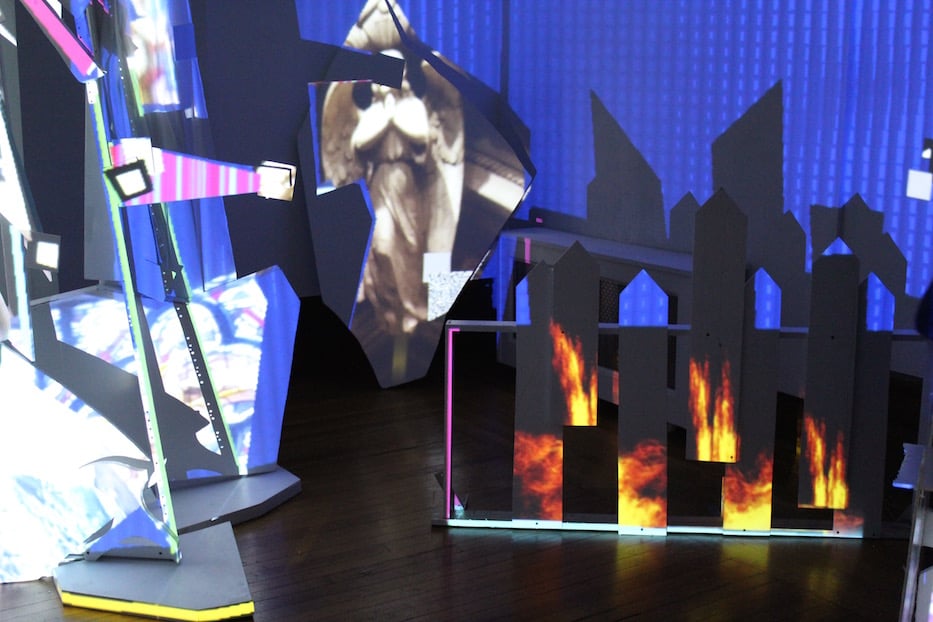 The "church" is one of four installations students worked on.

The installations come out of a new interdisciplinary, special-topics class that Johanna Bresnick, the chair of the ECA Visual Arts department, teaches with Stewart. Normally, Bresnick teaches sculpture and 3D design, and Stewart  teaches “New Media.” With funding from Area Cooperative Educational Services (ACES), ECA has updated its course offerings to include courses in interdisciplinary digital media. Brenick said it appeals to students well-versed in technology. 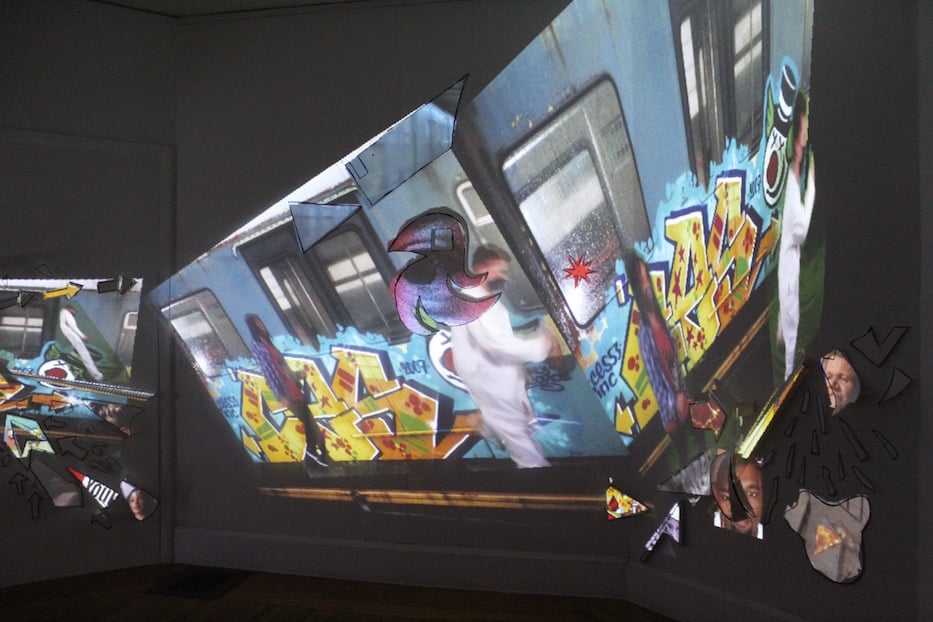 To begin this “all hands on deck group project,” as Stewart described it, students had to all use white objects such as chairs, pieces of poster board, and plastic grocery bags, and come up with a video component. They assembled the items into different installation sculptures, and each group approached the video component of the project differently.

The results range from riffs on organized religion to an urgent artistic call-to-arms to protect the planet. In the church-like installation, student artists invite passers-by to immerse themselves in the setting and sit on the white wooden chair. Along with an intricately cut screen, it creates a confessional booth. Above the booth is a video of an audio speaker. It feels concerned with questions of selfhood and autonomy.

Sophomore Sophie Greber, part of the group of ECA students who worked on this installation, said that many churches “prioritize [listening to] whoever’s talking rather than thinking your own opinions.” The inclusion of the phrase Everyone’s guilty of something was her brainchild: she heard her dad say those exact words, and then repurposed them. 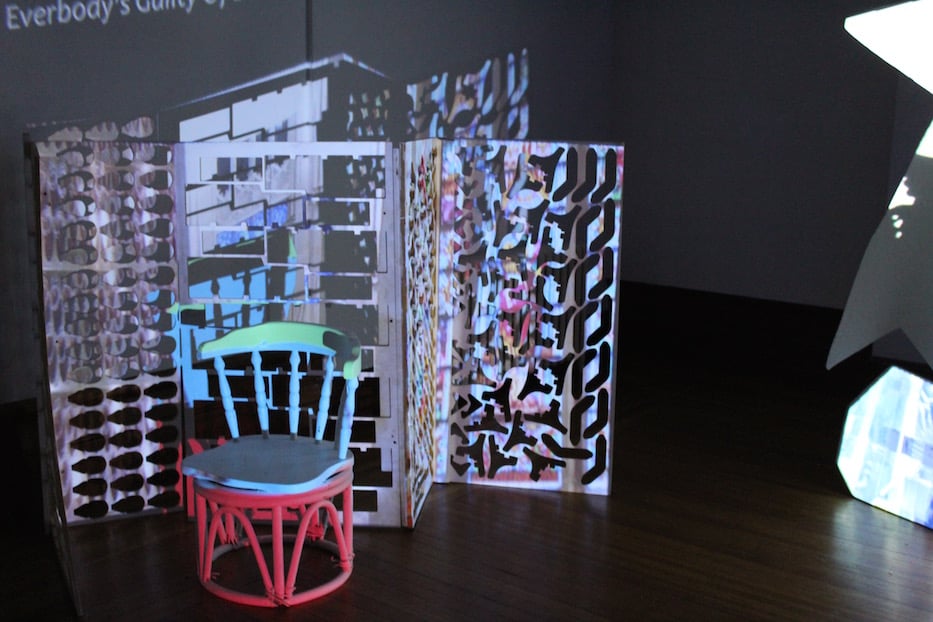 ECA Sophomore Sophie Greber: Many churches “prioritize [listening to] whoever’s talking rather than thinking your own opinions.”

In the next room, another group has arranged its white pieces into one cohesive sculpture with three sides, each one representing a distinct phase in the destruction of a coral reef. While the first side shows a coral reef teeming with life, the second shows the same reef bleak and bleached. The third is a “darker, more unknown side that ... we’re still constantly destroying,” said Max Barrett, one of the artists on the team.

Thursday, fishing nets hung from the ceiling of the exhibition room, at points so low that the passerby were caught up in them. Barrett described a detailed process that was hours-long, during which students threaded wire through “multiple layers of netting,” and then figured out a way to suspend it from the roof of the 120-year-old building.

“So every drill and every stake in it was a really important thing, and you had to know where it is,” Barrett said. “We even had to get the right paint color on it.” 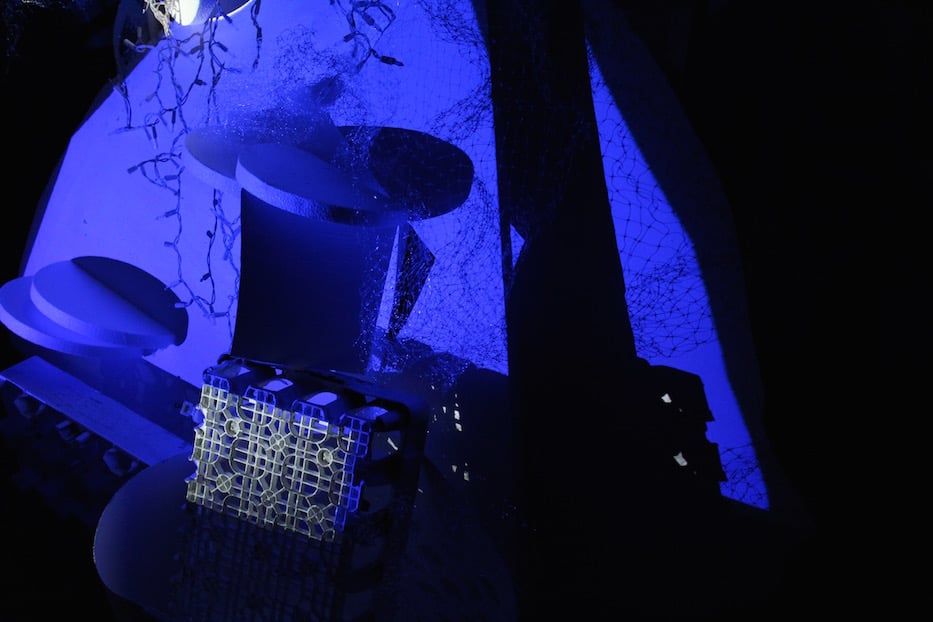 A detail of the reef-like installation.

Debbie Hesse, gallery director and board vice president at the Ely Center, said she is happy to have the work in the space. She recently realized that the center had a “block of time in December,” and saw that the timing would “dovetail really well with [the ECA’s] end of semester projects.” Given the short and dark days in December, she thought it would be ideal to exhibit some kind of video project.

Both Bresnick and Hesse are pleased with the collaboration between the Ely Center and ECA, they added—and looking forward to more in the future. Bresnick described the opportunity for her students to “participate in a gallery where there's actually adults showing most of the time” as “fantastic,” and Hesse said that it was “energizing seeing what [the students are doing] doing, that they've kind of used [the building] as a studio and transformed the building.” 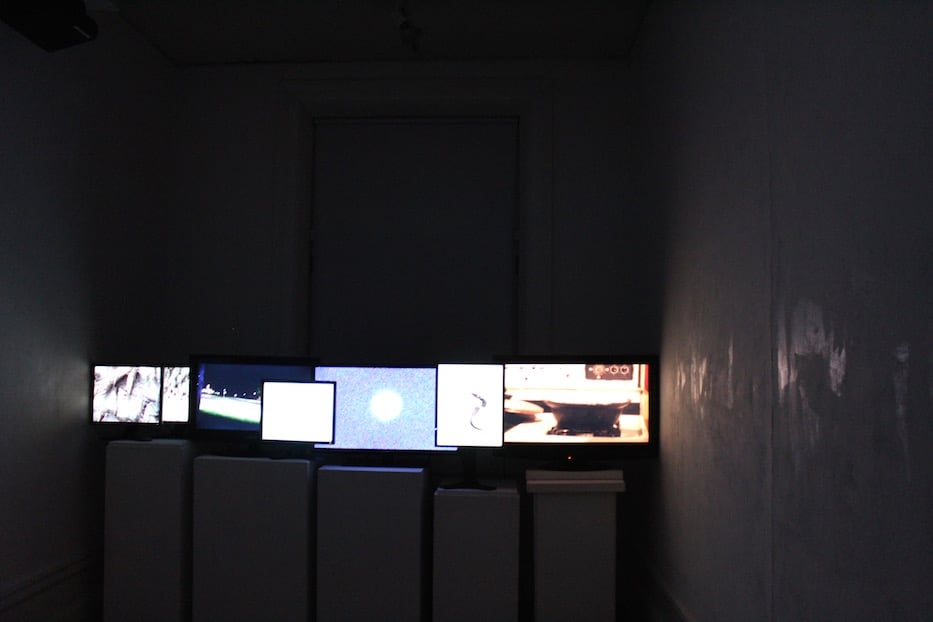 In a dark room off to the side of the exhibition, Henry Slomba, a senior at ECA, had set up a row of seven TV monitors that played a series of video clips.

“I always carry a camcorder with me, and I record moments around me that I think are interesting, or that I think would be useful in the film,” he said.

After compiling his recordings, Slomba chooses what clip to play at a certain moment on a certain TV screen “like a collage,” so that the viewer gets to “watch these different films,” or “see the world splayed out before you in these instances of action.”

Slomba said he sees this initial project as an experiment and looks forward to seeing where he can go from here. Several of his peers echoed the sentiment.

"I feel like so many people don't accept digital media as something that is art,” Greber said. “A lot of people think that digital art creates itself. Because somehow, like computers or whatever, but it's not at all true. This was very difficult. I put my blood, sweat, and tears into this as well as everyone else in my group. And I just hope that people appreciate it.” 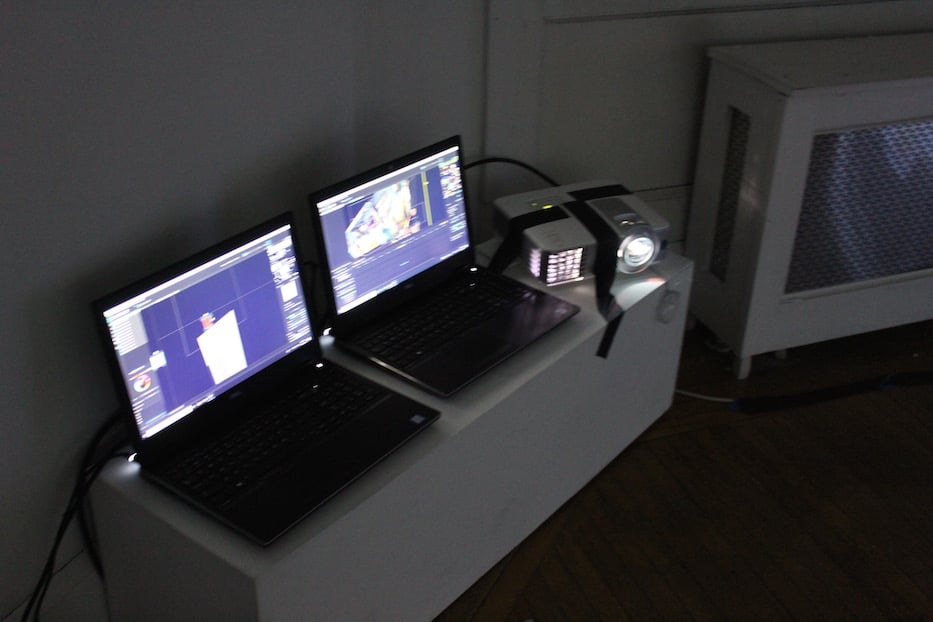 Technically Real runs at the Ely Center of Contemporary Art through Dec. 19. The space's winter hours are Sunday, Monday, Wednesday and Thursday from 12 to 5 p.m. For more information, visit the organization's website.