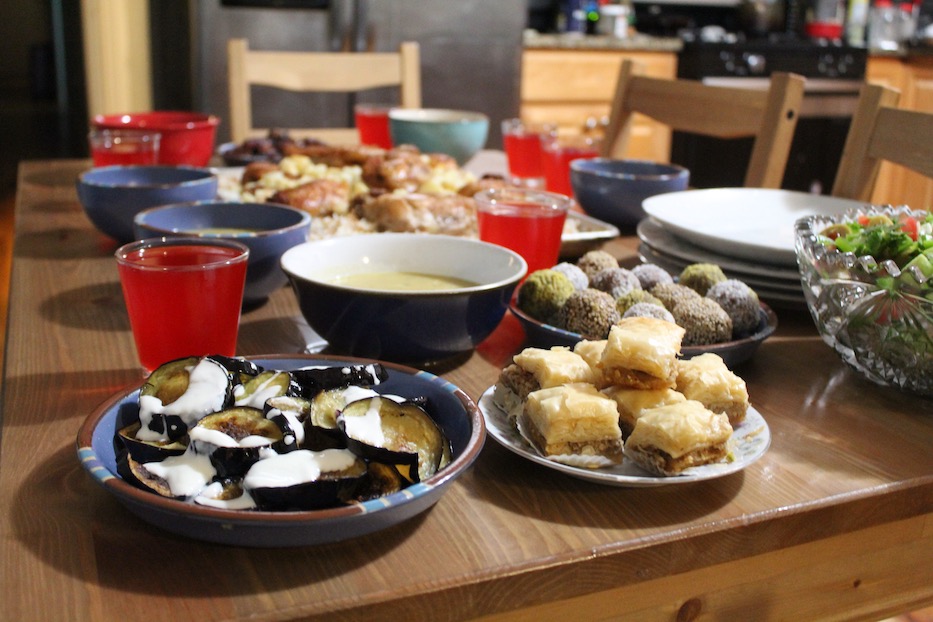 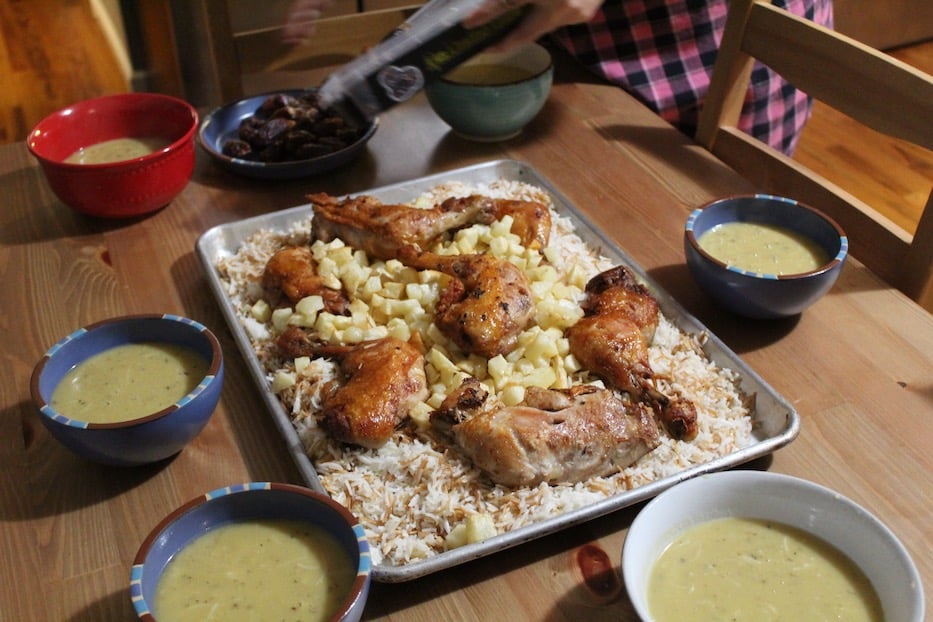 The family's iftar meal. They requested not to be photographed for this story. Lucy Gellman reports.

The chicken sizzled and popped on the stovetop, fragrant as its skin browned. On one side of the table, Dina Tareq set out a deep cake pan, studying its scalloped edges as she poured chocolate and vanilla batter inside. Her hands became balletic, setting out pistachio and sesame-rolled dates, chopped salad with glistening cucumber and tomato, lentil soup with whisper-thin threads of chicken. Rounds of eggplant with yogurt sauce peeked out from the corner. Her younger brother studied each new arrival as it landed on the table.

Outside their window, the sun was beginning to sink over the West Haven beaches. It was almost time to break their Ramadan fast.

The scene is a nightly one during Ramadan for Tareq and her family, Iraqi refugees who came to New Haven in 2013 and moved to West Haven last year. For all of them, the holy month is a time to turn inward, reflect and show gratitude—while also working full time and building a professional life in the country they now call home. They will end it with Eid el Fitr celebrations on Monday, which mark the end of Ramadan for Muslims across the globe.

“There are reasons why you need to fast,” said Tareq, who works as the communications, sales, and events director at Havenly, on a recent Wednesday at the family's home. “And one of the greatest reasons is to teach you that there are people out there suffering. There are people out there, they live in hunger and there's no one there to help them. They might lose their families. They're struggling with their jobs. You always need to be grateful of what you have and appreciate everything.”

Before sitting, Tareq’s mother, Havenly Co-Executive Director Nieda Abbas, poured ruby-colored fruit punch into clear glasses placed around the table. The oven hissed and roared to life as Tareq opened its door and slid the cake inside. As they sat for the meal, she, her mother and father reached for a date, a nod to the Prophet Muhammad’s counsel to break one’s fast with dates and water. The last time they had eaten was around 3:30 a.m. that morning – roughly 16 hours earlier. 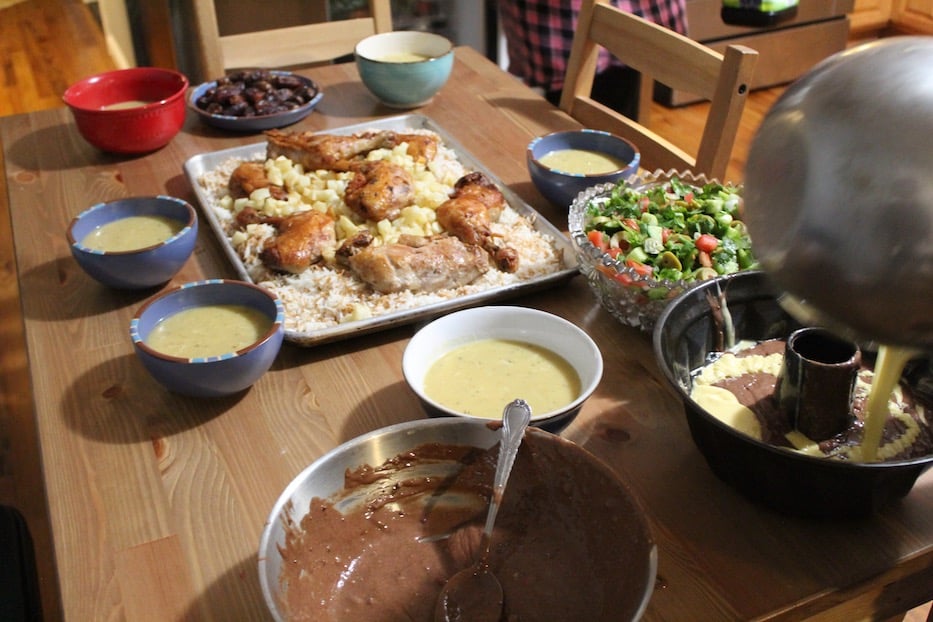 Tareq, who is 23, enjoys baking as a way to unwind. A recent iftar included a marbled chocolate and vanilla cake.

When Tareq sits down to break her daily fast, she is dipping into over a decade of history that spans Iraq, Syria, Turkey, New Haven and West Haven. Now 23 years old, Tareq was born in Baghdad in the late 1990s, the second daughter in a family of seven kids. During her childhood, her dad ran three culinary businesses in the city, for which her mother worked as a cook and ultimately ran a food relief program for her neighbors. As she spoke about her childhood, Tareq lifted lentil soup to her mouth, the liquid still steaming.

She remembers Baghdad as a place that taught her “humanity, like being a good person,” Tareq said. While her early childhood was a time of turmoil for the city—she was just four when U.S. forces invaded Iraq and occupied Baghdad in 2003—that’s never the first thing she remembers. Instead, it’s the memory of getting lost in her neighborhood as a child, and running into an older man who was close with her father. He helped her find her way home.

During her childhood, he country was also upturned by both war and sectarian conflict. Baghdad is a city shared by Sunni Muslims—like Tareq and the members of her family—and Iraq’s Shia majority. If a Sunni Muslim walked into a Shia neighborhood or vice versa, Tareq said, they could be killed or injured for being in the wrong place at the wrong time. Even as a child, she knew that that violence could come to her doorstep.

In 2006, her father received a threat that if he continued working, his restaurants would be bombed. The family took what they could and fled to Damascus, Syria.

Her father went first, and the family followed a week later. Tareq was only seven.

“We had to leave everything,” she said. "It was just not a normal childhood. You're leaving your family, your loved ones, your school and neighbors.”

She paused to move from lentil soup to fragrant rice, studded with vermicelli noodles and cubed potatoes. A chicken thigh, crisped golden on the skin and still warm, waited on the plate.

Perhaps because Damascus is where she began fasting for Ramadan, Tareq associates the city most closely with the foods she misses from Syria. Tearing a piece of chicken from the bone, she described the stuffed, baked kibbeh, red-brown tamarind juice (Sharab Tamr Hendi), and Booza—a rolled type of Syrian ice cream with cornstarch and pistachios—that she still remembers vividly.

With a smile, she grabbed her phone and pulled up an image of a vendor selling fresh tamarind juice in Old Damascus, the velvet blue of night behind him. A giant brass jug, rising into the sky, was slung over his back. Bright lights from Damascus’ Al-Hamidiyah Souq blinked in the near distance.

Her family applied for refugee status in 2007, when they were still living in Syria. As they waited for news, her parents ran a deli, building on the culinary foundation that would become part of Havenly’s mission years later. Four years into their time in Damascus, the Syrian Civil War upended their lives a second time, causing them to flee again. This time, their journey took them to Adapazarı, Turkey. Tareq, who was by then a teenager, remembered it as very green, with farms stretching out before her.

It was there, three years later in 2014, that family members received the news that they would be coming to New Haven as asylum seekers. Within days of their arrival, they were living in Fair Haven. Tareq attended classes at James Hillhouse High School, where she graduated with honors in 2017. Through Integrated Refugee and Immigrant Services’ (IRIS) “Cultural Companion” program, her family met Caterina Passoni, who co-founded Havenly in 2018.

A pot of water had begun to whistle on the stove. Tareq rose to take it off the burner, scooping loose cardamom tea into a cup for her father. The dark, broken leaves danced in the boiling liquid as she poured, and then settled at the bottom of the cup.

Connecting To A New Home 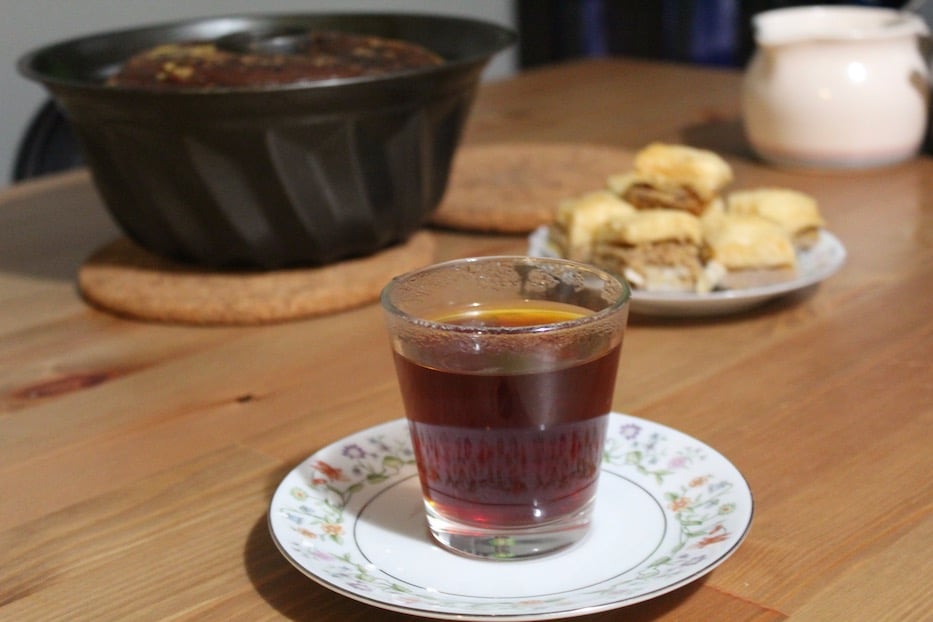 Cardamom tea, which Tareq's father loves, is often part of the meal after dinner. Baklava, cake, and stuffed dates are also usually on the table.

This year, just as in years past, Ramadan rituals have become a constant for Tareq in a world that continues to shift. In the family’s West Haven home, her day begins between 3 and 4 a.m., when an alarm reminds her that it is time to rise for Fajr—the pre-dawn prayer—and suhoor, the first meal of the day. When she can, she takes a short walk out to the beach, which sits just across the street. It’s there, each day, that the sun rises and sets like clockwork over the water.

Fasting reminds her of how much there is to be grateful for. There is her health, which was imperiled after a driver rear-ended her last month, totaling her car and sending her to the hospital with whiplash. There is her father, who contracted Covid-19 in the early months of the pandemic, and now observes a partial fast due to reduced lung capacity. There is the nightly iftar, which brings her family together to eat as a unit. In other months, she said, they wouldn’t normally eat at the same time.

And there is the food on their table, which reminds her of how much the family has. Of all the things deemed Haram or forbidden in Islamic law, she said, food waste is one that makes her incredibly upset (indeed, she spoke about it with a hitch in her voice, as if she'd been physically wounded). Even as she and Abbas navigate different foodways and Halal butchers in West Haven and Orange, she is grateful for what the family has.

With its blessings, this Ramadan also feels different, Tareq said. A year ago she was working part time and finishing her undergraduate degree in healthcare management, a field that called to her because she wanted to help people. Ramadan ran from April 12 to May 12, and she struggled to fast during the last leg of classes and finals. She didn’t cover her hair. She wasn’t able to dedicate the same energy and thought to observing the holy month that she would have liked to.

This year, she has been able to keep her fast and pray five times a day, for which she uses an app called MuslimPro (one of her younger brothers is also an alarm clock, she said: he woke her up recently at 3:30 a.m. just to have her drink a few sips of water). Inside Havenly’s Temple Street storefront, there is an area where she and other employees are able to pray during the day.  When she fasts, she wears a hijab, which helps her feel closer to her roots as a Muslim.

Back in the kitchen, the cake had finished baking, and the air was thick and warm with the smell of chocolate. As Tareq finished her meal, Abbas moved from the table to the couch, where she is able to rest after a day that begins before sunrise. Back at the table, Tareq cleared the dishes, stacking them by the sink. She lifted the cake from the oven, marveling at its black-and-white marbling.

The sky was velvety black outside. With the blinds shut, Tareq’s father began the Isha prayer, the final prayer of the night. On the table, a notification from the app MuslimPro popped up on Tareq’s phone, reminding her to pray before closing her eyes.

The path—from Fair Haven to West Haven, from high school to college to a job—has made her think differently about the word “refugee,” she said. What used to feel like an unwelcome label is now one that she embraces.

"The first couple years, it was like 'Why am I a refugee?' Because it was a struggle,” Tareq said. “I had to struggle. It’s just so hard to explain. But after a couple years, when I graduated, when I started learning, when I started having more connection with people to be surrounded with a community, then this word started to change a lot. ‘Refugee,’ it’s like a home to me. That’s where you came from.”