At Institute Library, Photographs Take A Long Look At History 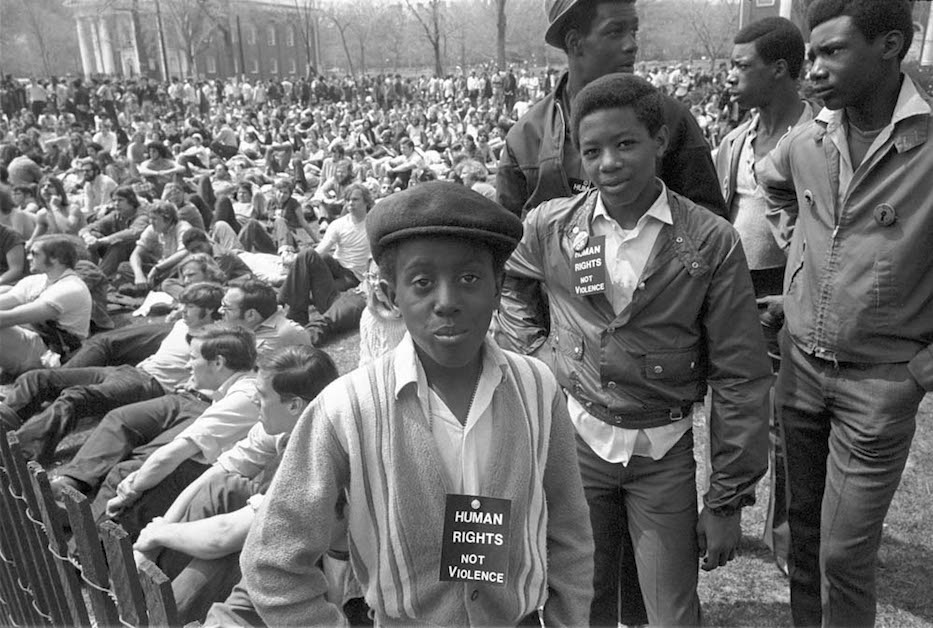 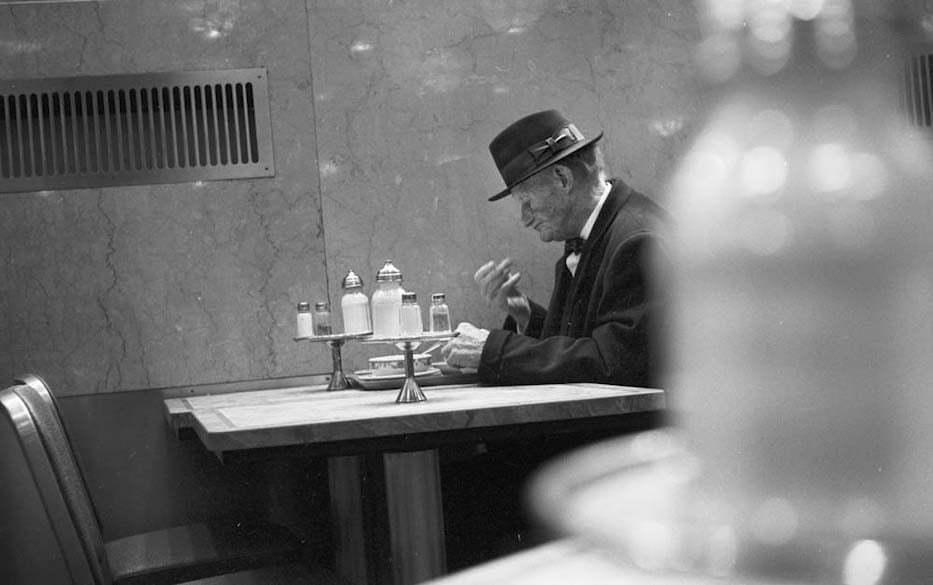 An elderly man wearing a top hat and a bow tie sits alone in a restaurant in New York, eating his supper in quiet reflection. The blurred object in the foreground of the image creates the impression that the photographer has stolen a glimpse into this otherwise private moment. There’s a slight blur of the man’s hand as he prepares to eat his next bite. The subject, it would seem, is unaware of the observance of his solitary meal.

It’s a manner that is characteristic of the rest of John T. Hill’s photography. The viewer is given a brief glimpse into the simple, but powerful everyday moments of his subjects.

Hill’s works are now part of John T. Hill: Persistent Observer, on display at the Institute Library on Chapel Street until Jan. 15, 2022. Curated by Stephen Kobasa, the exhibition features 22 of Hill’s photographs from across the globe. Several of the images were taken in New Haven—Savin Rock, the New Haven Green—while others capture scenes from Rome, New York, Atlantic City, and Fatima, Portugal.

Curator Stephen Kobasa chose to omit any explanations of Hill’s work from the exhibit based on his belief that providing a single explanation for a piece of art ignores the fact that viewers bring their own experiences and questions when they engage with art.

Hill studied painting, design, and photography at the University of Georgia and became a professor at the Yale School of Art and Architecture in the 1960s. In 1971, he co-founded the Yale Department of Photography, in which he acted as the Director of Graduate Studies until 1978.

Alongside his own photography, Hill has painstakingly documented the work of other artists. Most notably, he produced several books about the works of photographer Walker Evans, whom The Metropolitan Museum of Art calls “one of the most influential artists of the twentieth century.” Hill and Evans were colleagues at the Yale School of Art and Architecture and later, Evans appointed Hill as the executor of his estate. Kobasa noted that Hill’s dedication to other artists reflects the overall generosity and lack of self-congratulation that characterizes his work.

In many of Hill’s images, the viewer is left with more questions than answers. A man in São Paulo, Brazil runs by while a mother and several other onlookers peer at something out of view. As is often the case with Hill’s works, the unique placement of emphasis in the photo leaves the viewer unsure of where to focus their gaze. In the São Paulo photo, the onlookers and the runner provide a sense of leftward direction, but this is combatted by the prominent placement of the young boy staring off in the other direction, oblivious to the ongoings at the other end of the street. 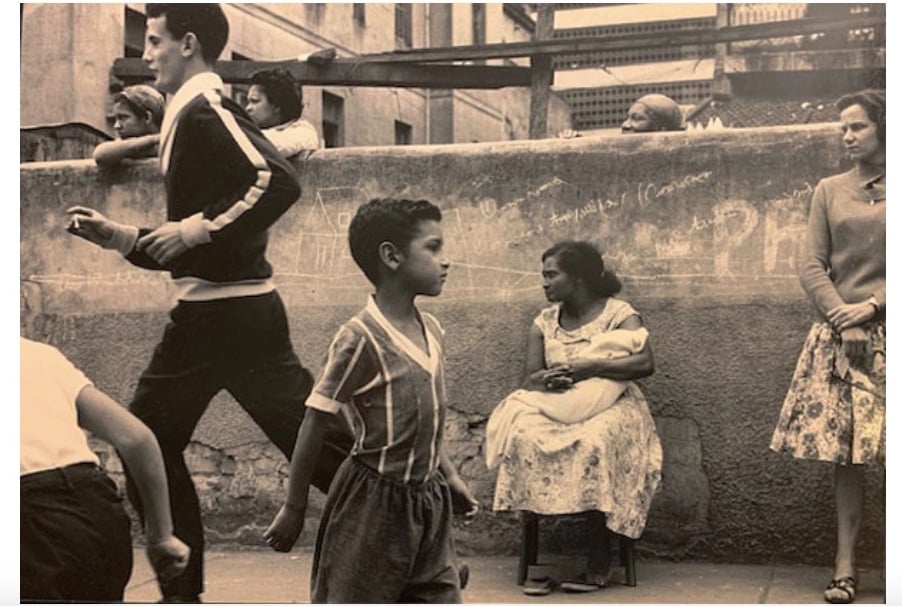 Kobasa suggested that Hill’s unique placement of objects in his images conveys “a sense of surprise,” which reflects how Hill views the world. As Kobasa sees it, Hill has a “certain gift” for attending to ordinary moments that often go ignored. “Sometimes it is the most obvious thing that tells you the most,” Kobasa said.

The interpretation of these moments is up to the individual viewer. In an unusual but contemporary choice, Kobasa chose to omit any explanation of the artist and his work from the exhibition. Instead, he prefers to allow viewers to create their own experiences. This is based on his belief that providing a single explanation for a piece of art is “tedious and boring” as well “absurd” in that it assumes people do not bring their own experiences and questions.

“What I see is not what I expect everyone to see [when they view Hill’s photos],” Kobasa said.

This may leave the inexperienced art viewer with the disconcerting feeling that they missed something. Others may appreciate Kobasa’s curation choice given Hill’s focus on scenes from everyday life, which may have very different emotional significance to different people.

The one photo of Hill’s that does receive some explanation is perhaps the one that is most well-known: his image of a young,Black boy taking part in the Black Panther trial protests on the New Haven Green in May 1970. In the photo, the boy stands in a slight, non-purposeful pose, gazing at the photographer with an expression that is difficult to pinpoint. It may read to some as “Yes, here I am.” Thousands of people in the background look on, presumably viewing the events at some sort of stage or speaker area.

This snapshot in time is contextualized through the prominent placement of the book May Day at Yale, 1970: Recollections, by Henry “Sam” Chauncey, John T. Hill, and Thomas Strong. The book describes the events of the protests, which were organized in response to criminal charges laid against members of the Black Panther Party, a controversial Black Power political organization with roots in New Haven.

In May of 1969, party member Alex Rackley was kidnapped, tortured, and killed by other members of the group based on their suspicions that he was passing information to the FBI. During this period, the FBI was widely distrusted for its clandestine attempts to neutralize the Panthers and other groups promoting political dissent.

On May Day in 1970, thousands of people attended a rally at the New Haven Green in support of Panthers Bobby Seale and Ericka Huggins. The protestors, who ranged from locals to Yale students, were suspicious of the legitimacy of the charges that had been laid against the party members given the FBI’s previous attempts to discredit the group.

Hill, alongside Strong, played a key role in documenting the events of the May Day protests. Kobasa emphasized that Hill sought to bring out the uniqueness of the individuals that were part of the rallies, using his photographs to “see the individual human” amongst the crowd.

Hill’s work offers viewers a peek into New Haven’s past and the ordinary moments that make life what it is. Meanwhile, Kobasa’s curatorial choices leave the enigmatic aspects of Hill’s photography intact. Perhaps Hill’s work, like many other things in life, is not meant to be explained.

The Gallery Upstairs at the Institute Library at 847 Chapel St., New Haven, will showcase John T. Hill: Persistent Observer until January 15, 2022. The Gallery is open from 11 am to 5 p.m. Tuesday to Friday, and on Saturday from 12 to 2 p.m.