At MLK Poetry Jam, Storytellers Own The Night 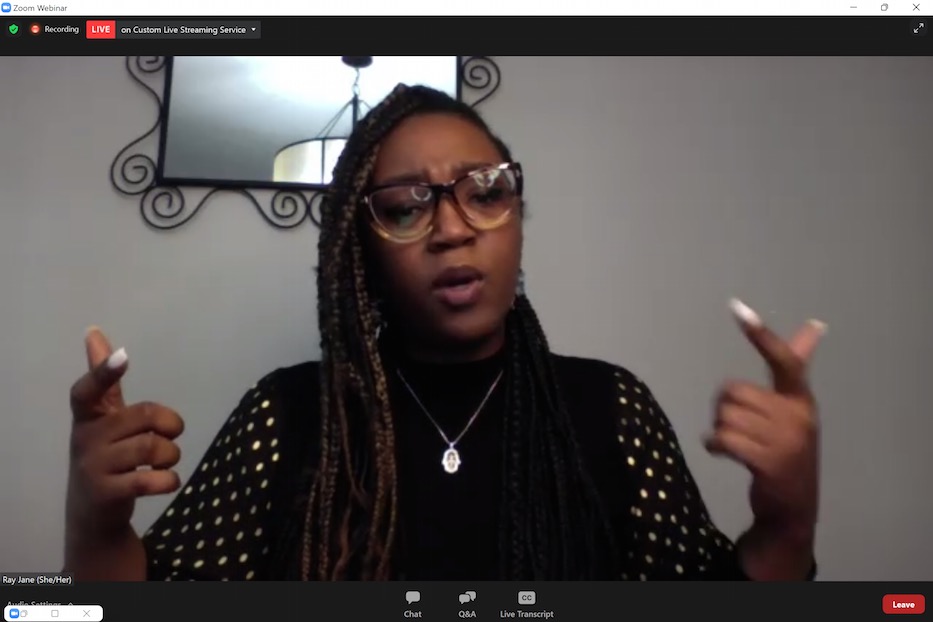 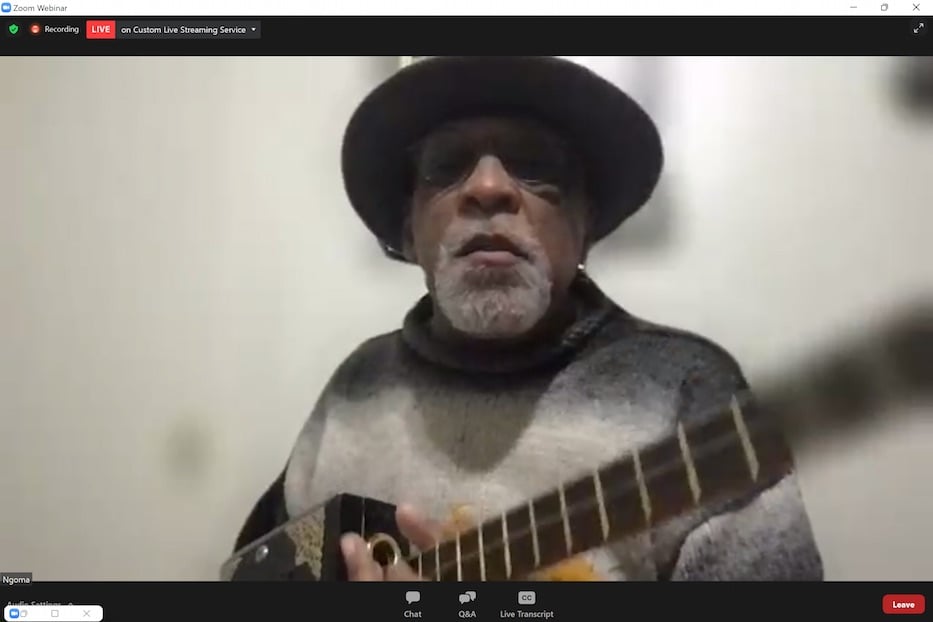 Poet Ngoma Hill sang over the choir as a recording of “Oh, Freedom” played in the background. As it drew to a close, Hill brought out a three-string cigar box guitar, ornamented with gold and lace-like details. He picked at the guitar while singing off the names of Nat Turner, John Brown, Harriet Tubman. He crooned through the refrain “You ain’t paid your dues/ to sing my blues.”

Sunday night, Hill joined co-host Croilot Semexant and over a dozen poets at the “Z Experience Poetry Jam,” part of the Yale Peabody’s 26th Annual Celebration of Dr. Martin Luther King, Jr.’s Legacy of Social and Environmental Justice. The jam, held in honor of the late Zannette Lewis, was just one in a line of several events honoring King’s legacy and highlighting its impact on artists and activists in greater New Haven. Watch all of those here.

The poetry jam included eight open mic poets—volunteers with poetry ready to read—and four featured poets. Viewers tuned in from across the country, from New York to San Antonio, Texas, and even Greece. 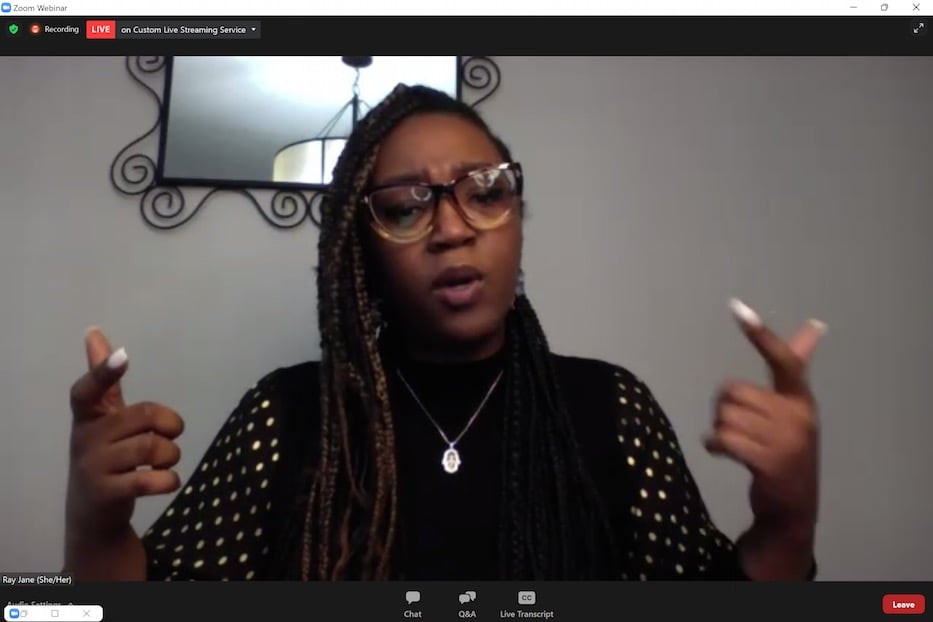 For over two hours, Black, Latinx, and Asian poets came together to give collective voice to their experiences living with racial oppression in the United States. Even in virtual space, the slam became a platform for the sorrow and deep anger at both individual and shared experiences with racism.

Fresh off her win of the inaugural Verb Benders slam poetry competition Brooklyn-born poet Ray Jane kicked off the night with a poem titled “Privilege.” Hill found Jane’s work on Facebook and invited her to the slam from there. As she read, the  poem gestured toward the invisible stronghold of systemic privilege for the wealthy:

They find it hard to conceive that they could live on top of we —
how the design of that truth could be so well woven into America’s seams.
They get so confused they even use the wrong quotes to justify their means.
BLM hit the streets and every major corporation started quotin’ MLK Jr.
but somehow amidst the wall between proceeds and privilege
they managed to miss the dream.

Lorraine Currelley, the Bronx-based executive director for Poets Network & Exchange and Bronx Beat Poet Laureate for 2020-2022, graced the virtual stage with her poem “As Good As New.” The poem, which is inspired by the painting called El Dueno del Todo (the Owner of Everything) weaves a story of the riches that poor enslaved people carried with them in their centuries-long search for freedom and for home. She read:

Like Morris, we bring pieces of our lives:
aged pictures passed down, a dress, pair of shoes, grandfather’s sacred letter,
and 102-year old Auntie Hatty telling us to wash our panties before going to bed . . .

Seems like Black folk have always been looking for home,
escaping plantations, looking for our people, children snatched from our wombs . . .
our resilient descendants still fight for what remains: freedom, a failed promise. 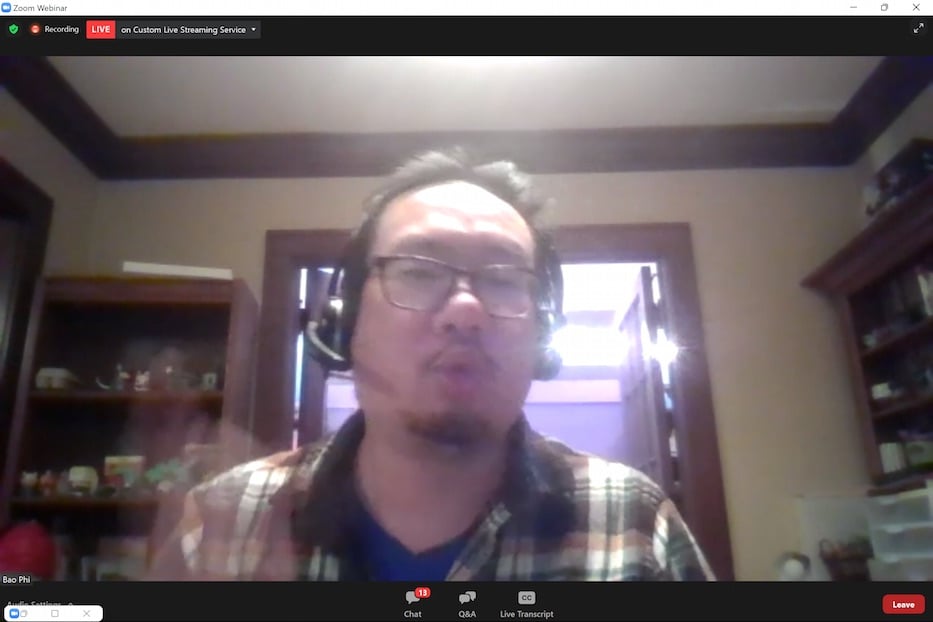 The slam’s last feature, Bao Phi, is the son of Vietnamese refugees who fled to the Phillips neighborhood of Minneapolis during the Vietnam War.

“Refugees,” Phi reminded the audience, “Don’t come to America with a plan.”

Drawn to spoken word by the skills of orators including Dr. King, Phi’s career in poetry began during his time competing for his high school speech team’s “Creative Expression” category.

The first poem he shared, called “Frank’s Nursery and Crafts,” was dedicated to his mother, an avid gardener in their Minneapolis suburb. In it, he remembered an incident in which he and his mother held up the line at a cash register in a gardening story because they were sure they'd been erroneously charged. The cashier first insisted on the receipt’s accuracy. Phi’s Mom firmly contested, much to the annoyance of the line of white customers behind them.

Small woman, with no knowledge of the way things are in America
Though year after year she makes flowers bloom in the hood,
flowers in the face of this land that doesn’t even want her here.

When a manager came over to tell the cashier they's overcharged Phi’s mother by $40–incorrectly listing an item quantity as 22 instead of two, Phi and his mother won the sympathy of the line formed behind them.

If only I was old enough to tell them to keep it,
because it’s not my Mom’s English that’s broken.

The poets used the slam platform as more than a place for emotional resonance. Alongside poems of grief, indignation, and anger were pieces that called for joy and visualizing a better world, where freedom—and justice and love alongside it—are promises realized. 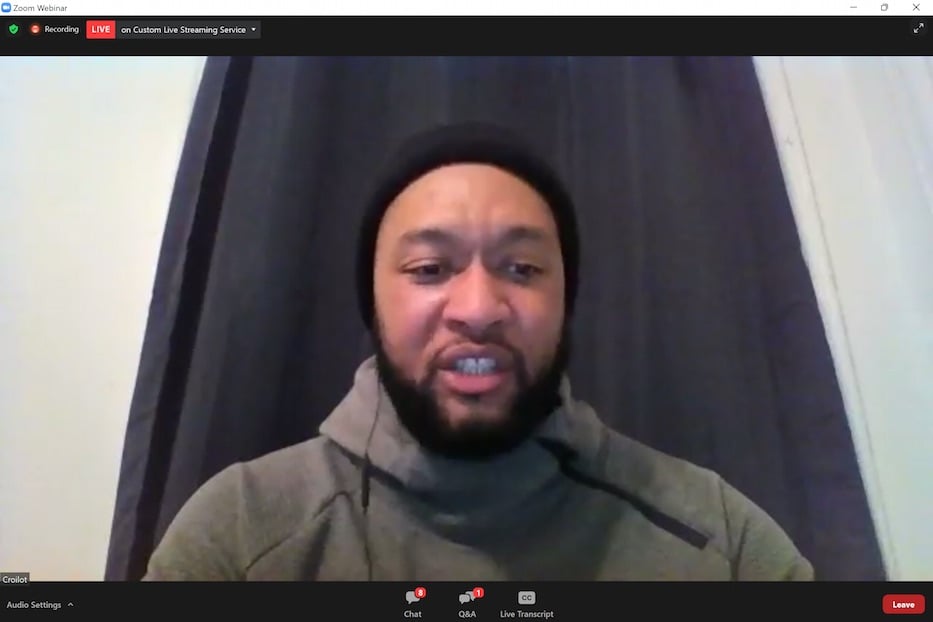 Jane’s poem “My Black Is” subverted narratives of Black identity tied to enslavement and discrimination for narratives of hope, everyday pleasures, and warm nostalgia:

Phi ended the night with a poem he called a work of “science fiction.”

“I wrote this poem because rather than try to . . . I’ll just say anger is something that I’ve been very familiar with in my younger years, and I think as a cis straight male anger, violence, revenge . . . these emotions are all very familiar to me," he said. "But when all of this [Asian-American persecution during the Covid-19 outbreak] went down, I wanted to do something different. I wanted to write a poem that instead of asking for revenge was actually asking us to imagine a world where this stuff doesn’t happen.”

Phi recited his poem “Alternate Reality,” which urged others to consider a world where violence is replaced with flowers, blame is replaced with mourning together, and family members can say proper farewells to dying loved ones.

It’s not science, but rather science fiction
that the landmines are not landmines, but seeds.
And like flowers bursting from the soil after the winter you are
an explosion in bloom.