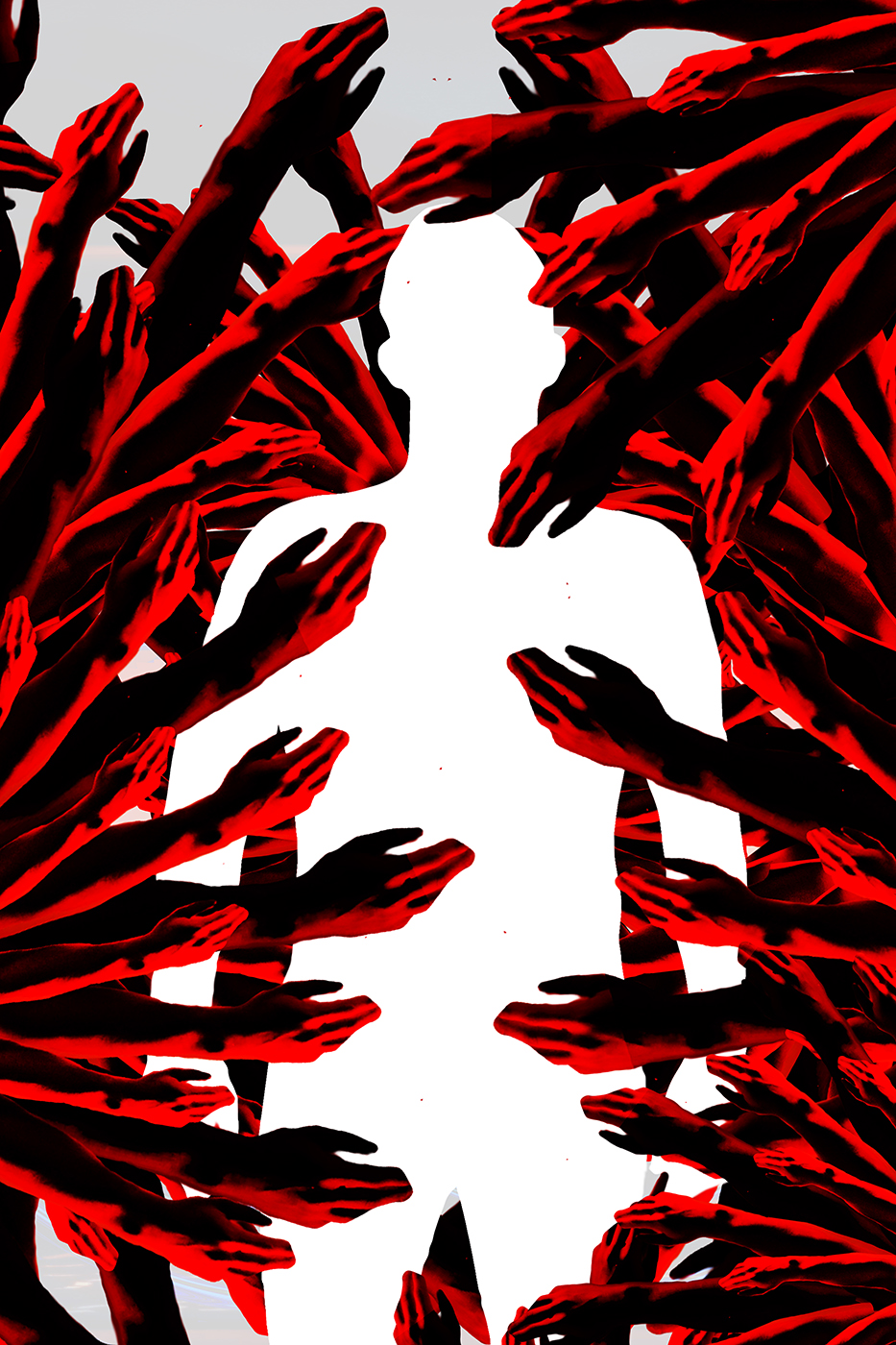 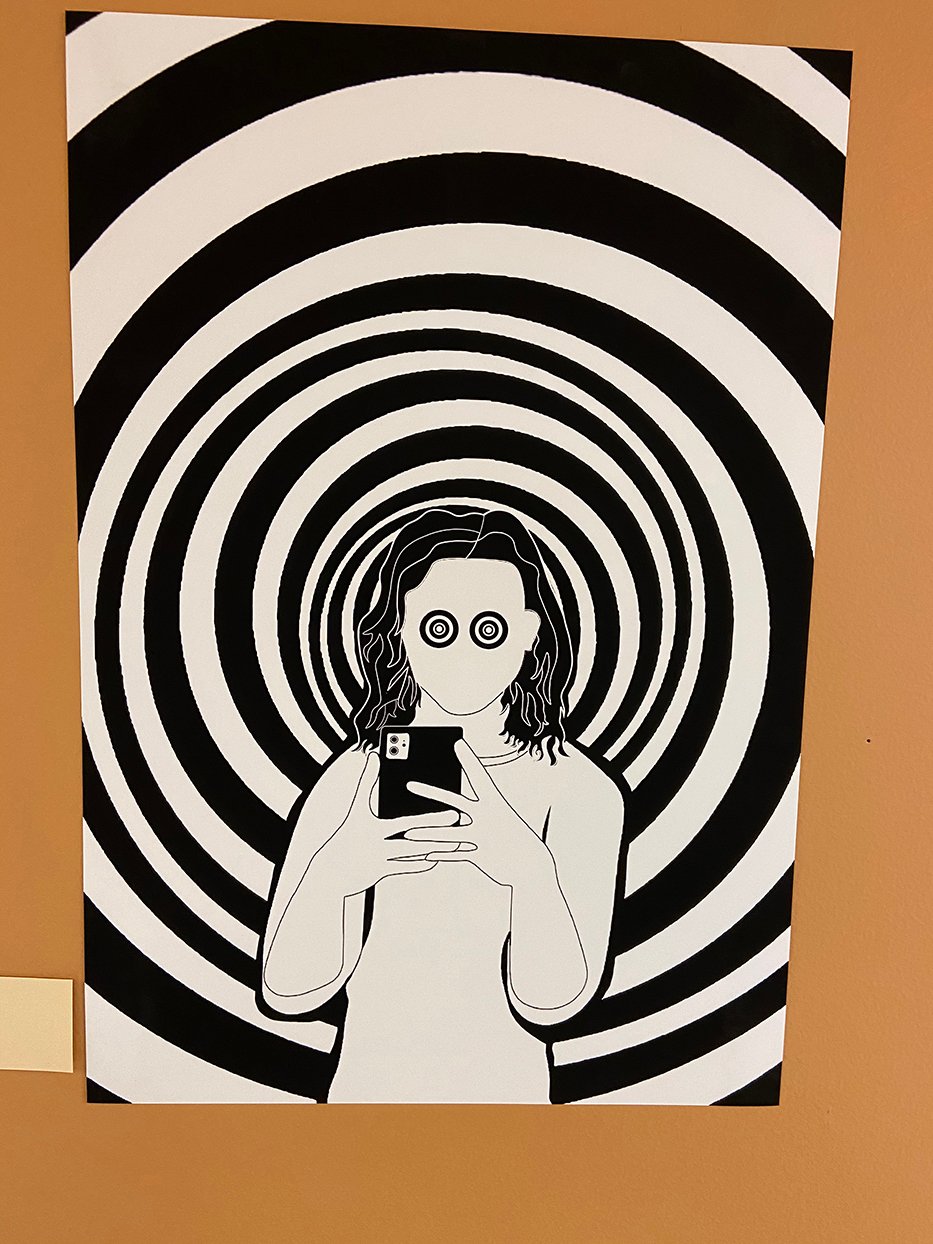 Excessive Use by Vanessa Giraldos. Photo Courtesy of the New Haven Pride Center.

A person on their phone stands in front of a black and white spiral background. The figure has been disturbed; their eyes rise from the phone screen and stare  at the onlooker. A series of concentric circles stare back with a mixture of confusion and hostility.

Vanessa Giraldos’ Excessive Use hangs alongside works by artists Maria Altamura (Basurababii), Jessie Bowie, and Stephen Cardone in Relinquish Control, running at the New Haven Pride Center through April 2. Curated by Altamura, the show features four queer artists from Fairfield County as they reflect on losing and re-finding control over the course of a year marked by the Covid-19 pandemic.

An artist talkback is available here.Viewers are able to see the work virtually or person, but must schedule an appointment to access the center's Orange Street gallery.

At first glance, the pieces are a bit disjointed from one another. Bowie’s mixed-media illustration of male bodies seem at odds with  Cardone’s more muted photo of a pair of hands crossing fingers. The longer one looks, the more each piece offers a distinct perspective on how the artists have explored control either within themselves and the larger communities they belong to.

The setting—a gallery explicitly dedicated to queer art—is not lost on the artists. In promoting the show, each of them wrestled with the visibility of their queerness and how it translated to audiences beyond friends and families. In a discussion that opened the show, they joked about how being “artsy” was often synonymous with being queer growing up. 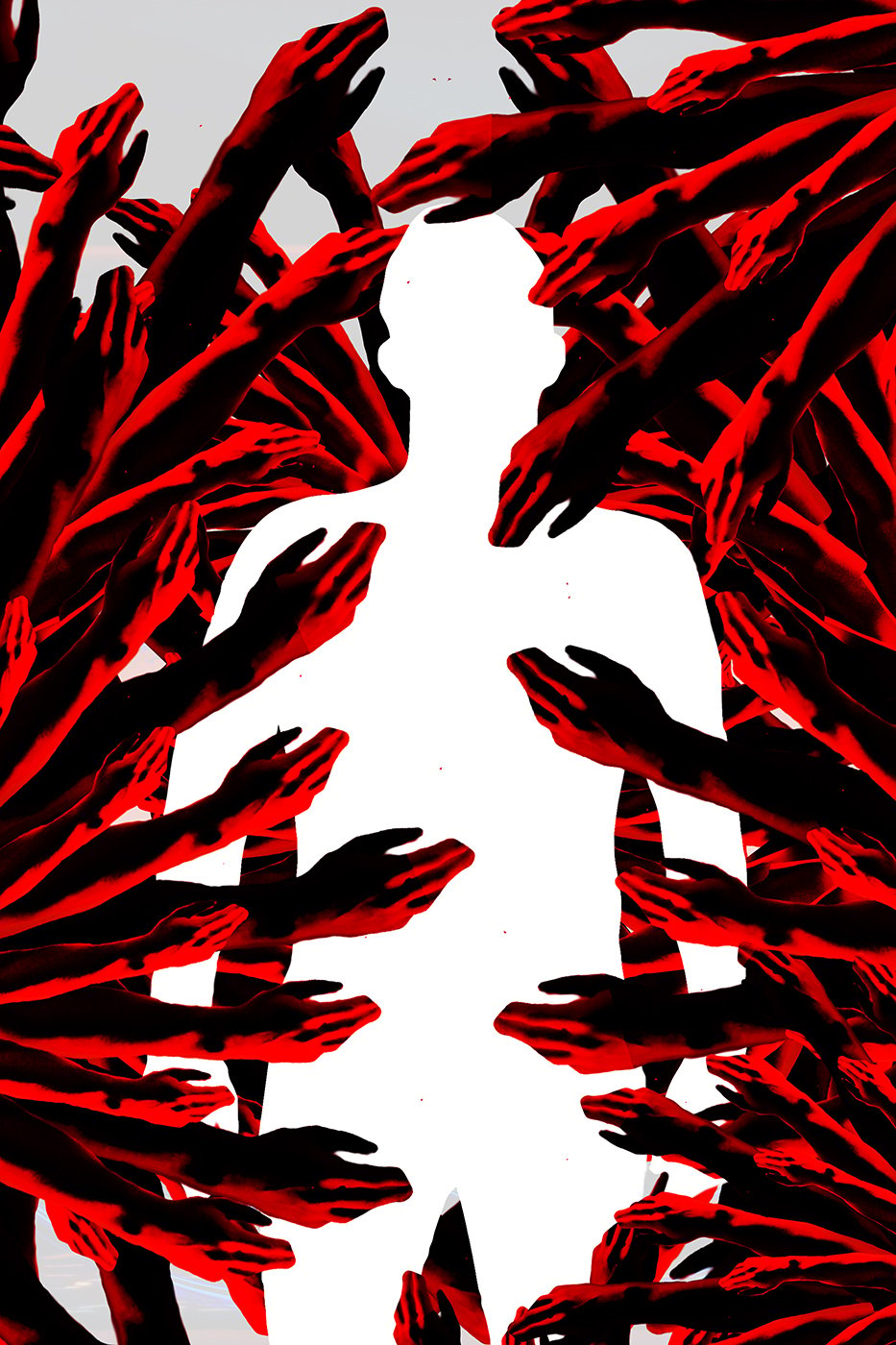 In An Ugly Prayer, a gaggle of red arms extend out from the outline of a human body, and overlap with another set of red hands that are reaching towards the body. It reads as a sort of layering—the personal illusion of control with the outside factors that dictate that control.

After taking a break from six months of producing, Cardone returned his work with a new perspective of centering the subject more and bridging the gap between subject and photographer. He chose to let the subjects shine and center their beauty, he said. 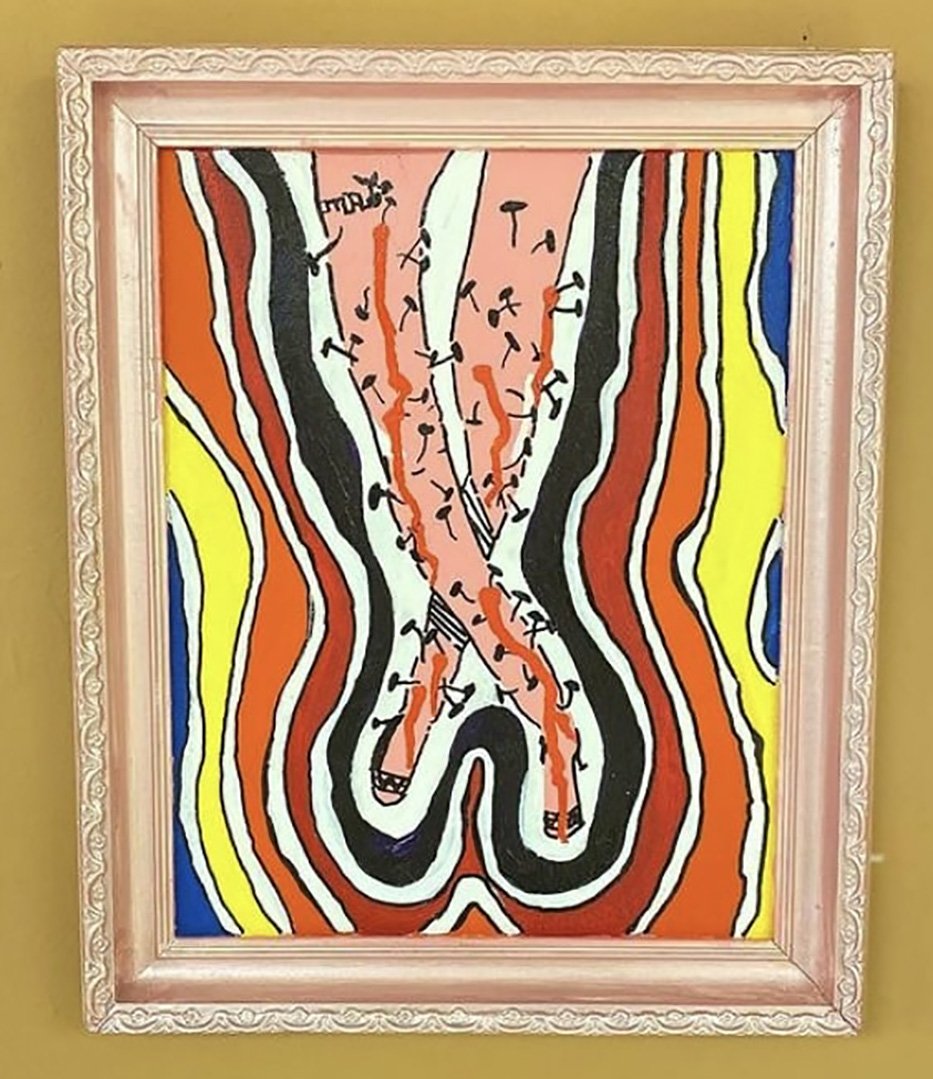 Over the course of the pandemic, Altamura dabbled more with muted color than her  usual over-the-top color palette. In Divine Intervention, two peach-colored legs littered with nails cross one another, representing the invisible pain Altamura experiences as disabled person. The streams of blue, yellow, and orange encasing the legs are a reminder of the divine protection she carries, she said.

It fits into surprising conversation with the color-blocking in Bowie’s work, as many of his male figures are outlined in weightier black and shaded with warm black and brown skin tones.

The black in Giraldos' work, meanwhile, is rich and almost velvety to the eye. The images often reference her memories, or physical objects that have held her interest. Even though the images are easily recognizable due their full shading and heavy lines, the empty space distorts the images just enough to give a sense that the images are not as rigid as they appear. As if, perhaps, they still must fight for control.

“How do we create tangible things out of these intangible things?” she said at a talkback Monday night. “As a queer person of color, I’m always interested in exploring through art  whether it be culture … or a reflection of the outside environment.”