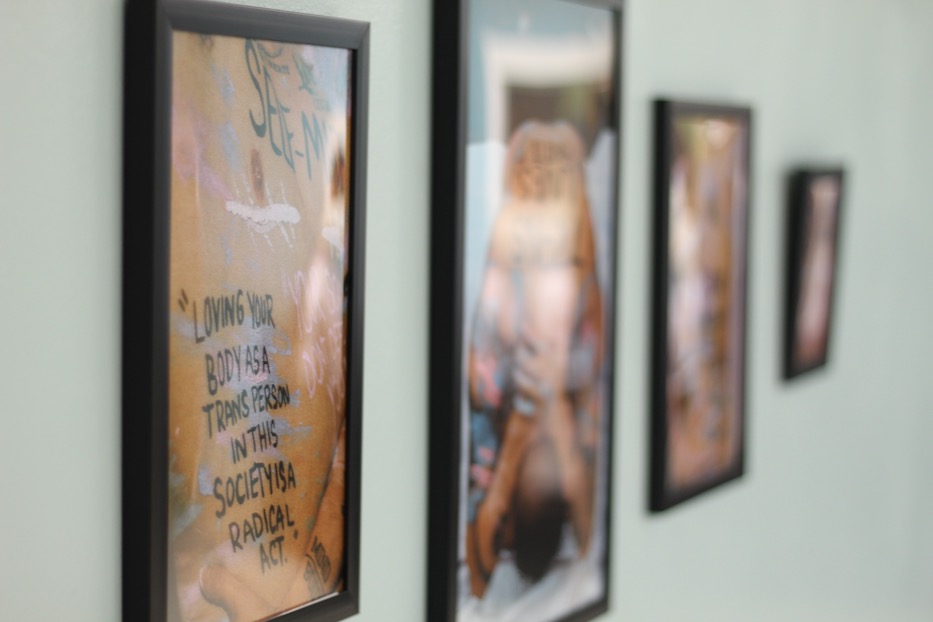 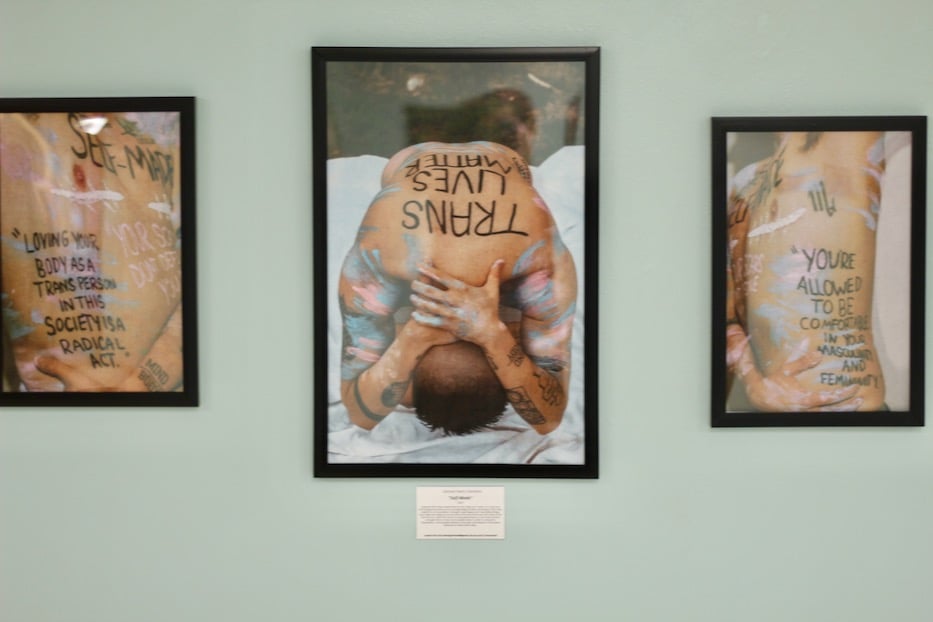 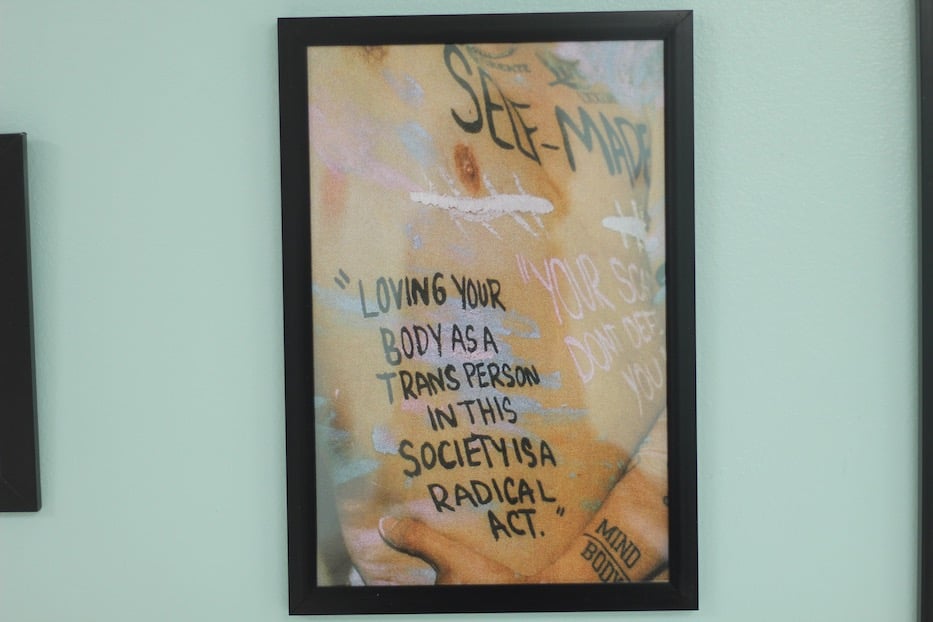 The figure leans forward in child’s pose, his hands clasped over the back of his neck as if in prayer. On his arms, smears of blue and pink paint wind down the biceps, tinted with silver as they slip over sharp black tattoos, then move past a spray of freckles. In the blank space on his upper back, the words TRANS LIVES MATTER sprawl across skin.

The portrait, taken earlier this year, comes from Berlin, Conn. based photographer Samuel Avery Giardina, an artist using his camera and his craft to advocate for trans rights, visibility, and mental health across the state and beyond. Now through early December, his work is the subject of a solo show at the New Haven Pride Center at 84 Orange St., in the newly-painted Great Room Gallery.

The show opened Nov. 14, in observance of Transgender Awareness Week. The Pride Center is open Monday through Friday from noon to 5 p.m. and for support and affinity groups that it lists on its website. This weekend, it will hold a vigil and altar making for Trans Day of Remembrance on Sunday afternoon at 3 p.m. Learn more about that here.

"Trans folks exist, and they deserve the right to live happy, fulfilling lives, to feel safe, to feel loved, to feel valued, and just to live their very best version of themselves," said interim Executive Director Juancarlos Soto Wednesday afternoon, surrounded by Giardina’s work. "When he [Giardina] applied, we saw his artwork and we fell in love with it." 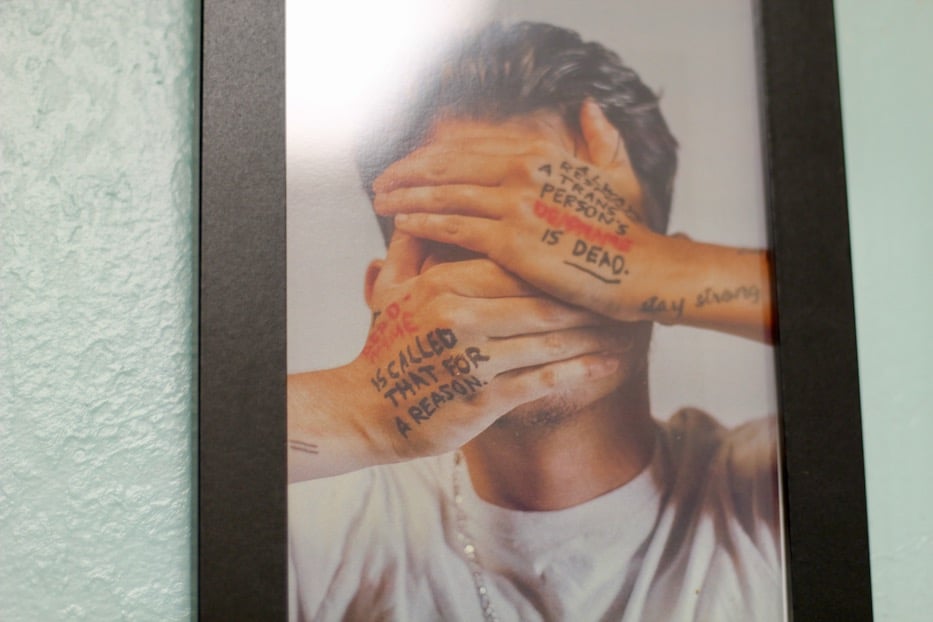 Giardina’s gift is not just his sharp eye, but interest in layered narrative, intimate self-portraiture, and the intervention of technology on every aspect of the transitioning process. In his 2020 “Coming Out,” which marks the beginning of the show, Giardina slouches against a wall, head placed in the deep V his knees have made against his chest. At the base of the image, his cotton socks roll up into the frame. A handle glints on a closed door in front of him. It appears he is alone.

Text floats over the image, two purple ovals in the upper right of the frame. “I don’t know how to tell you this but…”/”I’m transgender,” the text reads, the letters floating in space. In the right light, a viewer can catch themselves in the frame’s reflection—an invitation from the artist to consider how they might respond. If they come close enough to the image, they can nearly hear the artist’s steady breath, an affirmation that he is still here.

There’s also something confessional about it, of a piece with how information is shared and curated in digital spaces. But in making the moment so public, Giardina also brings a viewer all the way in, and lets them start a visual journey alongside him. In text accompanying the exhibition, the artist explains that he came out as trans in early 2020, and began taking testosterone in April of that year. He also chose and stepped into the name Samuel Avery during that time, and something clicked. 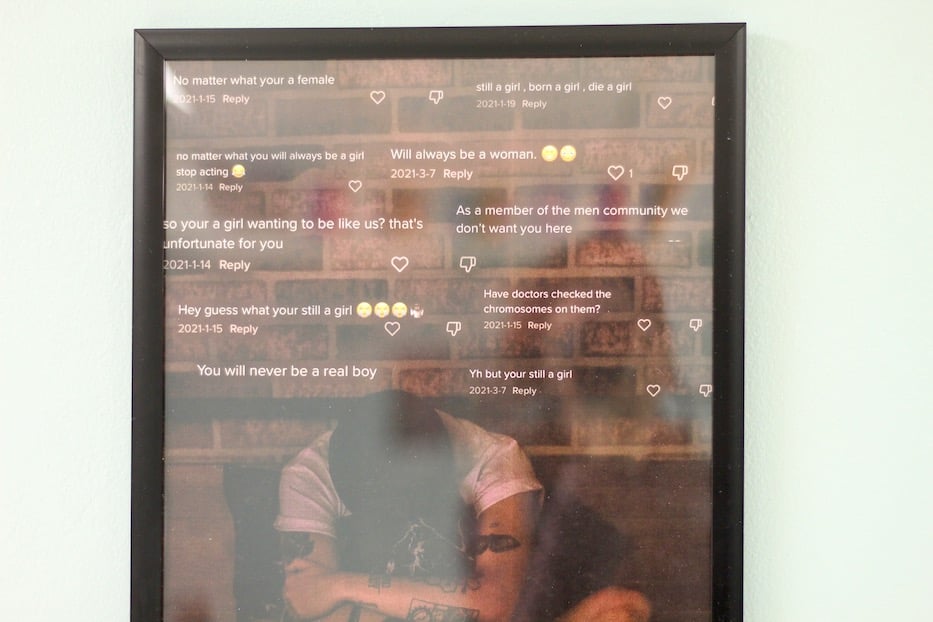 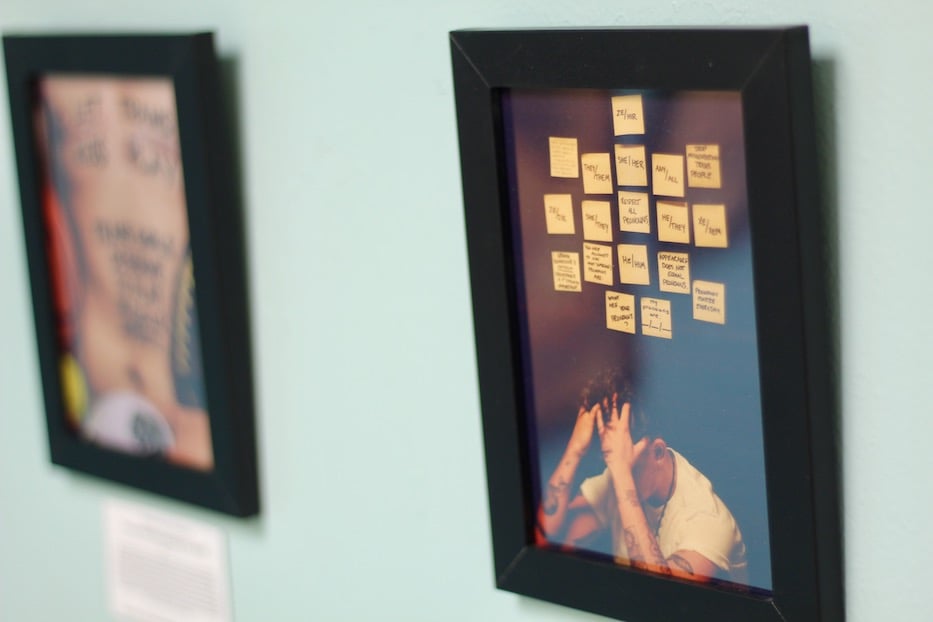 Top: "The Reality of Being Trans on Social Media," 2022. Bottom: Detail, "What Are Your Pronouns?" 2022. The shoot was done this year "in honor of national pronoun day," reads an accompanying label.

As they follow a timeline of the last two years, a viewer can track the artist’s journey along everything that was and is happening in the wider world, from Covid-19 to a rise in anti-trans legislation that has continued into this year.

The rest of the exhibition, installed on freshly painted, aqua-blue walls, is dedicated to that wider story, and how it dovetails with Giardina’s fight for trans visibility and acceptance. Just feet away from “Coming Out,” the series “Self-Made” again shows the artist as the subject, this time covered in a chrome-tinted blue and pink paint and black text. The colors are immediately recognizable as those in the trans pride flag.

Loving Your Body As A Trans Person In This Society Is A Radical Act, reads one block of text, written beneath his right nipple and armpit. You Are Allowed To Be Comfortable In Your Masculinity And Femininity, reads another. The title, hanging over it, asserts both Giardina’s self-made-ness in this moment—the moral certainty that has gone into his transformation—and implies the word that is both missing and present. Which is to say, “Self-Made Man.”

The clarity and size with which the statements are written, meanwhile, magnifies their impact. These sentences alone are not particularly complicated or controversial—one is allowed to be comfortable in that space in between gender binaries. Trans rights are human rights. Trans lives do matter. The genitalia with which one is born is not destiny: what a fragile and precarious way to see the world. Agreeing with him doesn’t seem hard. 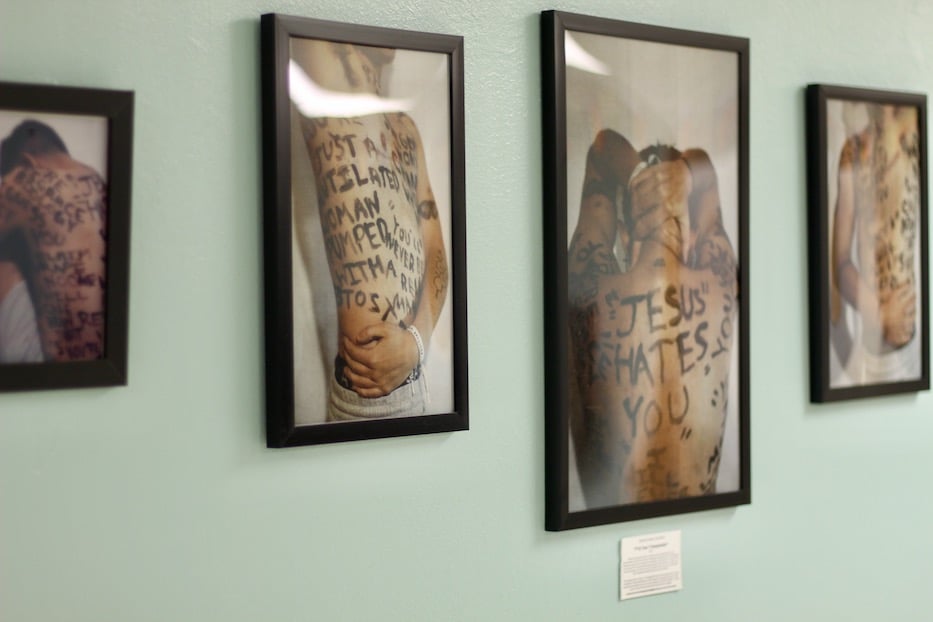 Except, of course, that the artist is living in a country where the right wing, including Christians with whom Jesus would be none too pleased, would like to legislate him out of existence.

In this sense, it’s incredibly moving that Giardina’s skin itself is the substrate; he makes his transformation, and the body that it creates, into a piece of living art. There’s a fair amount of vulnerability there: he is willing to put his own body on display as an act of resistance, and also an attempt to ease the path for those who may come after him.

So too in a series of self-portraits installed on the opposite wall, in which Giardina has externalized the insults that he has faced as a trans man. In one, the words Jesus Hates You cascade down his back, surrounded in a sea of vitriol floating in black paint. On his torso, pictured in another frame, the sentences You’ll never be a real man and Woman pumped with testos— collapse into each other, the words criss-crossing his chest in every direction.

It brings a deeply human element to the work, reminding viewers that in the midst of theoretical and legislative discourse, abstracted attacks from the right, and (often performative) cis allyship on the left, real lives and livelihoods hang in the balance. The images are sobering, but they are also a calling in of sorts, asking a viewer: “What would you do if you heard these words? What will you do to change if you’ve ever been the person saying them?” 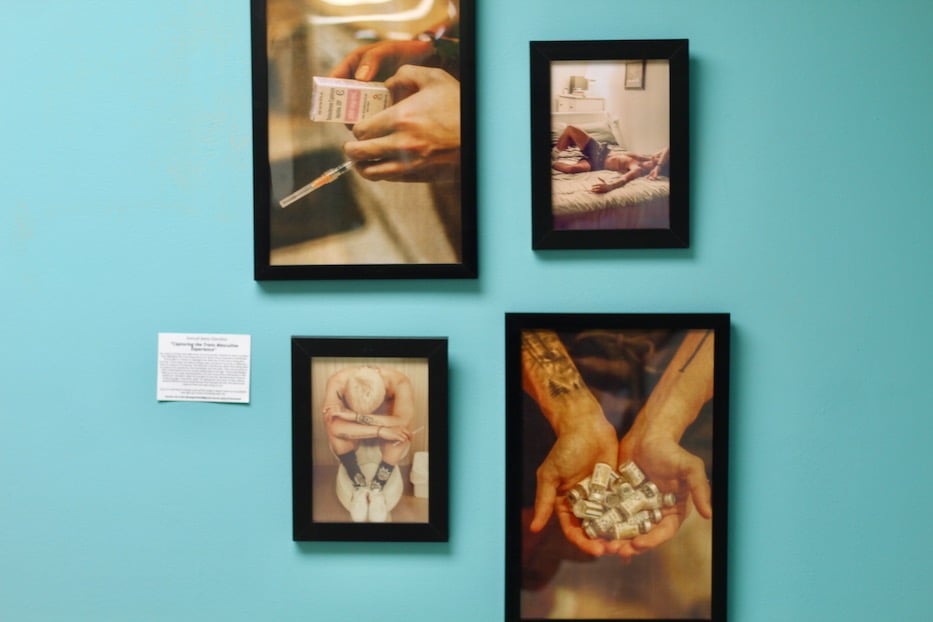 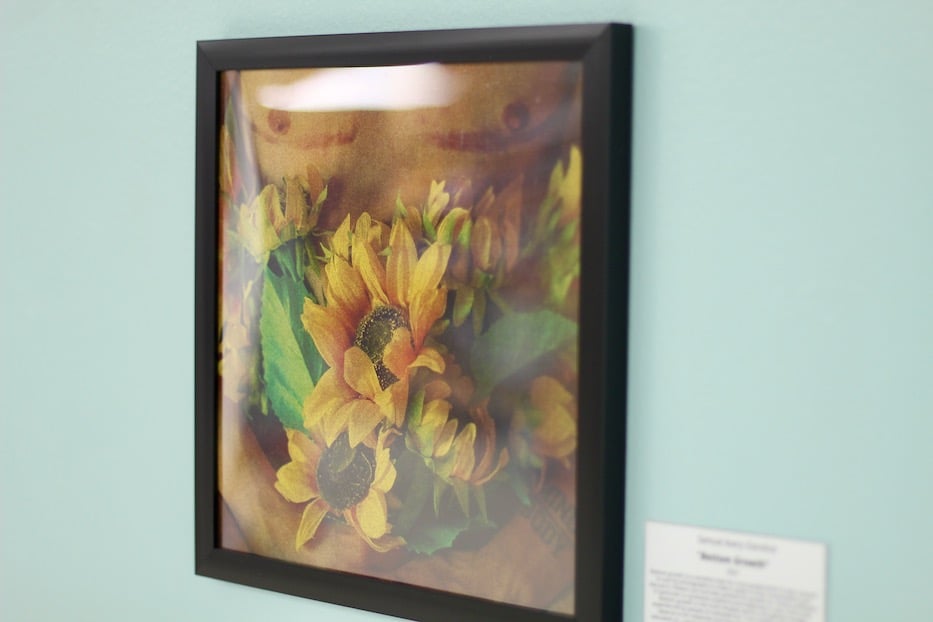 Giardina also highlights the importance of trans visibility: he documents his own medical journey with testosterone, which began in April 2020 and continues today. In a quartet of photos titled “Capturing The Trans Masculine Experience,” he breaks down the process of taking T, balancing two self-portraits with close-ups of needles and emptied vials in his hands.

It opens a very real, often unspoken discourse around needle anxiety, physical and emotional discomfort, and body dysmorphia that Giardina explores in work throughout the show.

The artist leaves room for small, tender joys, and a viewer is luckier for it. In his 2022 “Bottom Growth,” Giardina has pictured a detail of his hands, holding a bouquet of sunflowers over his genital area. Above the blooms, two red lines hover under his nipples, the signs of top surgery still visible. There's something very painterly about the image, as if its taken from a Dutch still life.

As they bloom, the petals soaking the image in yellow and green, a viewer jumps to the understated power of these flowers, which remediate toxic soil as they put down roots. 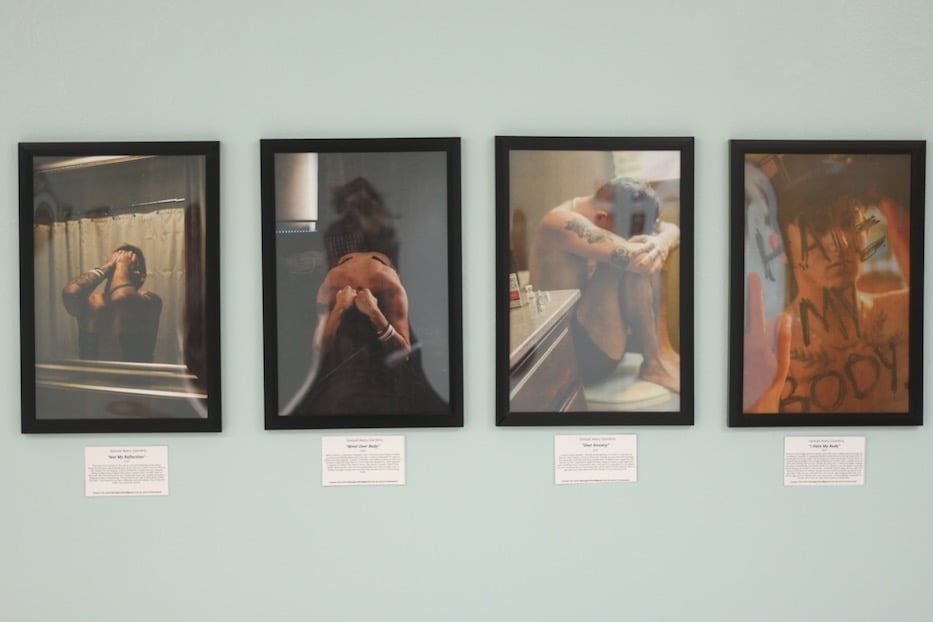 From left to right: "Not My Reflection," "Mind Over Body," "Shot Anxiety," "I Hate My Body" are all dedicated to body dysmorphia.

Back in his office Wednesday, Soto stressed that the exhibition is part of keeping operations running at the Center, particularly during Trans Awareness Week and also all year long. He pointed to a young drop-in from Gateway Community College, who commented that they felt seen and accepted in the Center's basement space.

"I think we always have to show up for our community," he said. "We need to continue to be that place that accepts people, that sees people, that values people, that encourages people to be the best version of themselves, and also to support the community. Including our staff, who are members of that community.”