At SCSU, A Tale Of Two Families 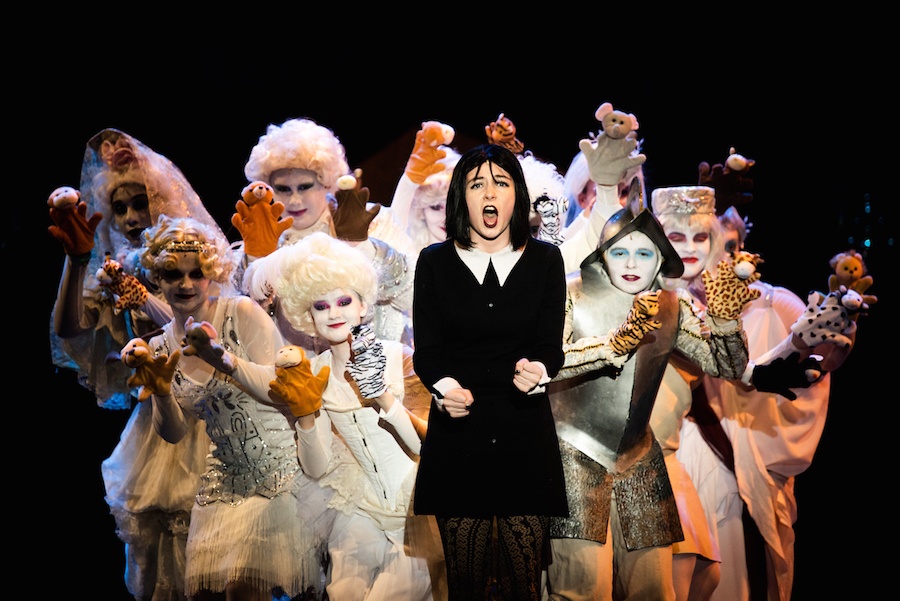 At first meeting, Gomez and Morticia Addams stare down Mal and Alice Beineke. The first couple is dressed in a black pinstripe suit and black-lace evening gown. The second, in trench coats. They couldn’t seem more different. But they’re supposed to get along, for the sake of their lovestruck kids. Right?

That’s the conflict at the center of The Addams Family, running Oct. 6-7 and 11-14 at the John Lyman Center for Performing Arts on Southern Connecticut State University’s main campus. The production is presented by the Department of Theatre and The Crescent Players, a student-run organization. Despite the recent warm weather, it’s right on time for Halloween.

The musical, with music and lyrics by Andrew Lippa and book by Marshal Brickman and Rick Elice, is based on Charles Addams’ long-running cartoon. But it’s more caricature than macabre, more silly than sinister.

As the musical kicks off, Wednesday Addams (a terse Maire Whelan) is still a teenager—almost a “Thursday,” says her father. She’s older than she is in the original comics, sporting a sleek bob instead of her iconic braids. She’s also old enough to have decided to marry “normal” Ohioan Lucas Beineke. When she invites the Beinekes over for dinner, she begs her parents for “just one normal night.”

Following the universal truth that teenagers must find their parents embarrassing, Lucas simultaneously begs his parents for the same. Specifically, he wants his mother to stop speaking in greeting-card style, rhyming poems.

Wednesday also makes a specific request of her father: that he not tell Morticia (Melanie Byron) of her plans to marry Lucas. Gomez (Matthew Lopes) must decide whether to honor his promise to his daughter or his promise to his wife that they will always be honest with each other. Lopes plays the divided patriarch with gusto, hitting all of the notes—comedic and musical—perfectly.

He can’t keep the secret for long. After the reveal, Gomez points out that Morticia, ghostly white and austere, also tried to hide her engagement. She reflects, and then exclaims, “Oh God, I’ve become my mother!” Even the creepiest can be cliché.

Byron, with nearly permanently pursed lips, is equal parts morbid and mordant. When she does smile it’s to rejoice that death is unavoidable. “For when I’m scared of true disaster/ I remember this…/ Death is just around the corner,” she sings in a jazzy showstopper. Naturally, a corner/coroner joke ensues.

Morbid puns aside, the show is ultimately about family. Watching your kids grow up is hard for the Addams too. Gomez sings “Happy Sad,” an empty-nest lament about feeling—you guessed it— both happy and sad that Wednesday has grown up. Despite the uninspired title, Lopes makes the number feel sincere.

Unlike several shows up now, The Addams Family eschews politics by design. A few lines stand out. When Wednesday first tells her family that the Beinekes are from Ohio, her father responds, “Ohio? A swing state!” Later, as the two mothers awkwardly get to know each other, Alice tells Morticia that her poems are “always about the one thing everyone needs and so few have!" The Addams matriarch pans, “Healthcare?” (The real answer, we are told, is love.) But most of the jokes feel like a product of their time—2010, when Brickman and Elice wrote them.

Some beloved elements of the source material appear in the musical: a pale hand appears in a tight spot light to snap in the iconic theme song during the overture and curtain call. Even Cousin It, a motorized stack of wigs, appears twice, although It plays no part in the plot.

All said, the show is more kooky than spooky—a rom-com dressed up in black lace and dark jokes. But that’s not a bad thing. When daily life feels like a horror show, cartoon darkness is a welcome respite.

SCSU Theatre, in collaboration with The Crescent Players, presents The Addams Family - A New Musical Comedy at the John Lyman Center for the Performing Arts Oct. 5-7 and 11-13. For tickets and more information, click here.