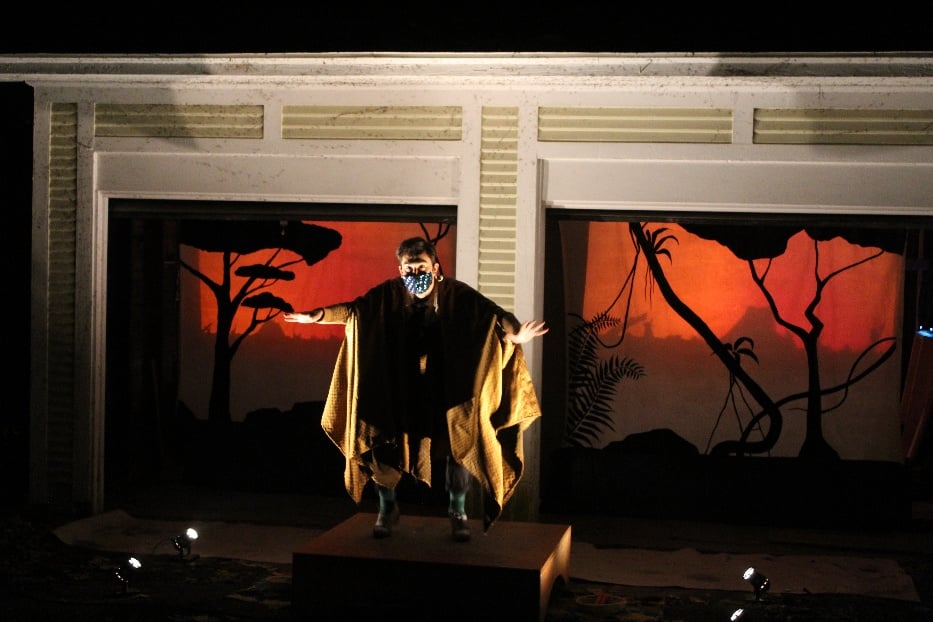 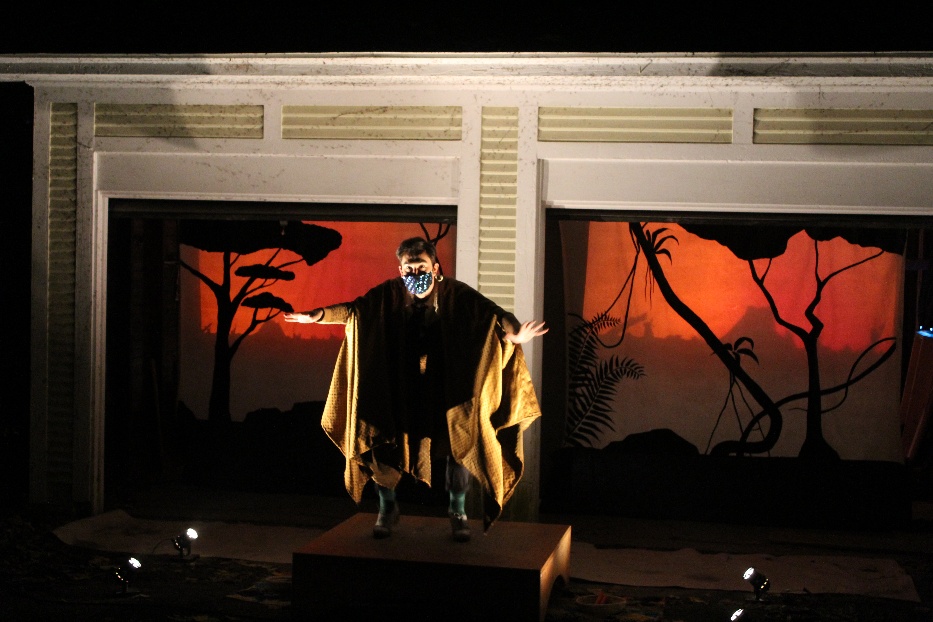 Boitatá, defender of the Amazon, rose from the ground and towered over the seated audience. The large green serpent stretched out her neck, looked at eight-year-old Emma Bailey and shrieked, “Boitatá.” She was hungry for Emma's eyes.

Bailey and her mother Rachel were two of a few dozen people to attend East Rock Halloween Project's production of Boitatá Saturday night. Instead of a traditional static stage, small COVID-19 “pods” of three to four families marched across four outside garages, each depicting a different scene of the Boitatá myth.

The production was a collaboration among artists from A Broken Umbrella Theatre, Yale School of Drama, Brown University, Brazil, and Puerto Rico. The play was selected because it was an opportunity to tell a story beyond the Western canon and spread a positive environmental message, said producer and director Addie Gorlin-Han.

The myth is originally from the Tupi-Guarani indigenous peoples from Brazil. In Tupi Guarani, “mboi” is “snake” e “tata” is “fire.” With countless variations across tribes, languages, and dialects, the group chose to adapt Educa Mais Brasil’s version.

In the work, the environment is front and center. The first scene, performed on Cottage Street, opened with performer Orlando Hernández, standing in front of the shadows of a rainforest. Swinging his arms in a chopping motion, he asked the audience to join in and chop down metaphorical trees with him. For the brief minutes he tap danced away carefree on the stage, the forest was peaceful.

In a flash, a thick dark cloud of smoke from the logger’s fire rose behind him blocking the sun. Flames emerged, and Hernández fled. The legend goes that after months of devastation, a hurricane came and flooded the forest killing all the animals. Boitatá awoke to find no food except the eyeballs of dead animals. She ate the eyeballs, which held the last bit of light and hope for a brighter future.

Giant floating eyeballs  fashioned out of Chinese Paper lanterns guided audience members to the next garage. At the front of the pack, Lorena Garay strummed away on her guitar filling the chilly night air with soft chords just like the ones played at a campfire. 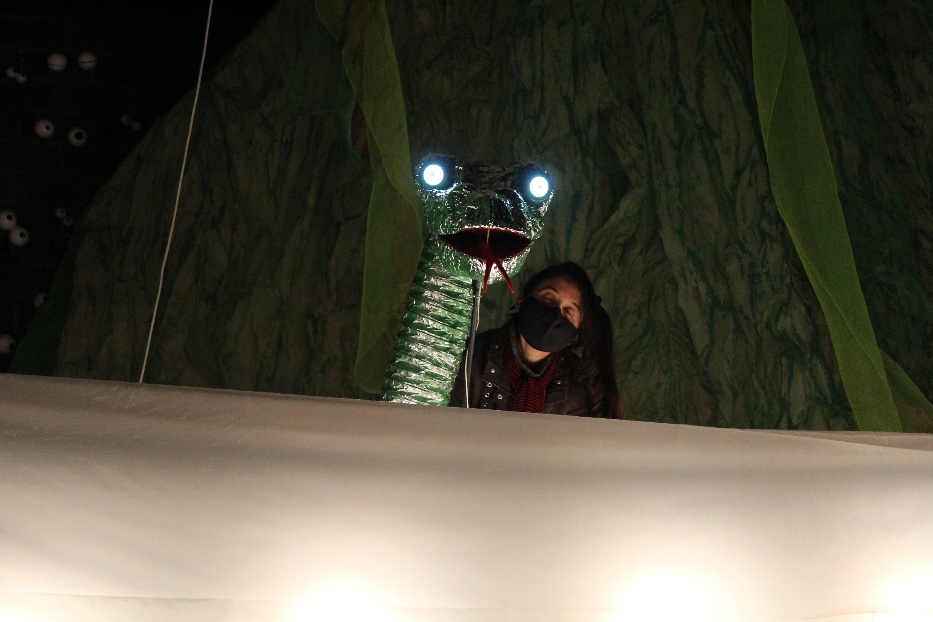 Boitatá emerged from the Amazon river after a great catastrophe with a hunger for eyeballs.

At the second station, a young and loud Boitatá emerged from the depths of the Amazon river. At first glance, she was tepid and stayed close to the ground scanning the devastated surroundings for food but found nothing but eyes.

She stretched out her neck towards audience members, screeching her name. Audience members both young and old squealed with laughter as the baby Boitatá floundered on stage. Suddenly she found a trove of eyes behind her, and grew dramatically in size. She raised herself from the ground and stood more than seven feet tall. Yet, she remained hungry.

By the next station, Boitatá had blossomed into a devastating beautiful adult snake with a charming personality that could easily get anyone’s eyeballs if she asked—and she did. Drag artist Tipsy Von Tart, decked out in shimmering sequins, walked across the stage lamenting her stomach issues. The eyes she loves to eat so much, she explained, caused a bit of a gassy stomach.

After releasing some of her gas (which she blamed on the audience and frog) she was ready to perform. To the tune of Jesse J’s "Burnin’ Up," she spun, strutted and danced from corner to corner of the garage. As an interlude in the middle, she replaced lyrics Alicia Keys’ from “Girl on Fire” with her own take, “I love those big juicy eyes / they’ll go straight to my thighs.” 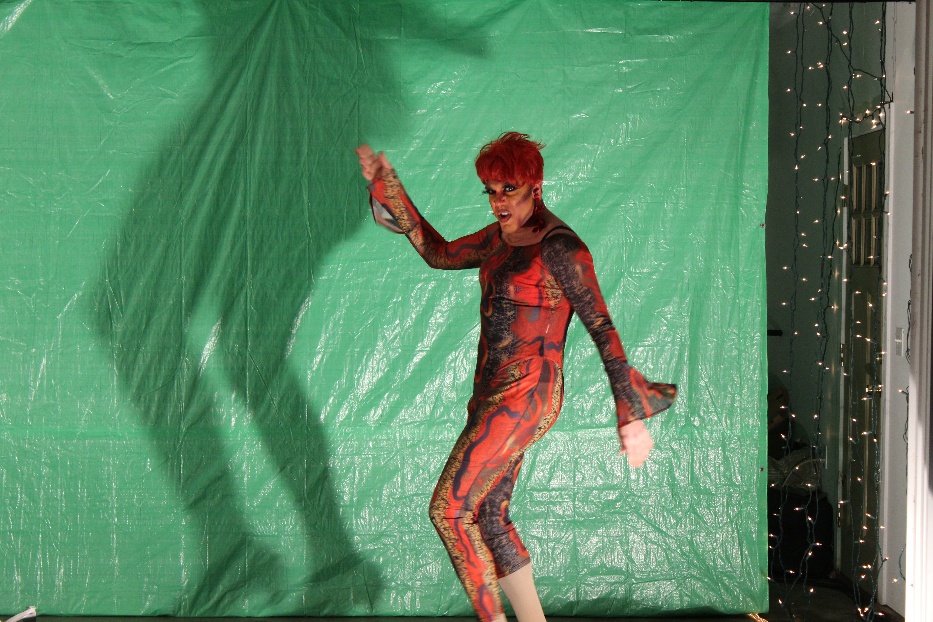 In the final station, Boitatá went quiet. Her evergreen scales became translucent, allowing all the glowing red eyeballs inside to shine through. The audience watched in silence as she wriggled across the stage for the last time before dying. The red lights dimmed out, and crew members released a wave of white balloons into the pitch black sky. The balloons represent the light returning to the planet once more.

For theater lovers like the Baileys, the performance was a rare opportunity for Emma and her mom to experience the usual joy of Halloween even in the middle of COVID-19.

“In times of COVID where you can’t get live theater, this was an extraordinarily welcomed treat for us,” Rachel Bailey said. “Halloween is for the kids."