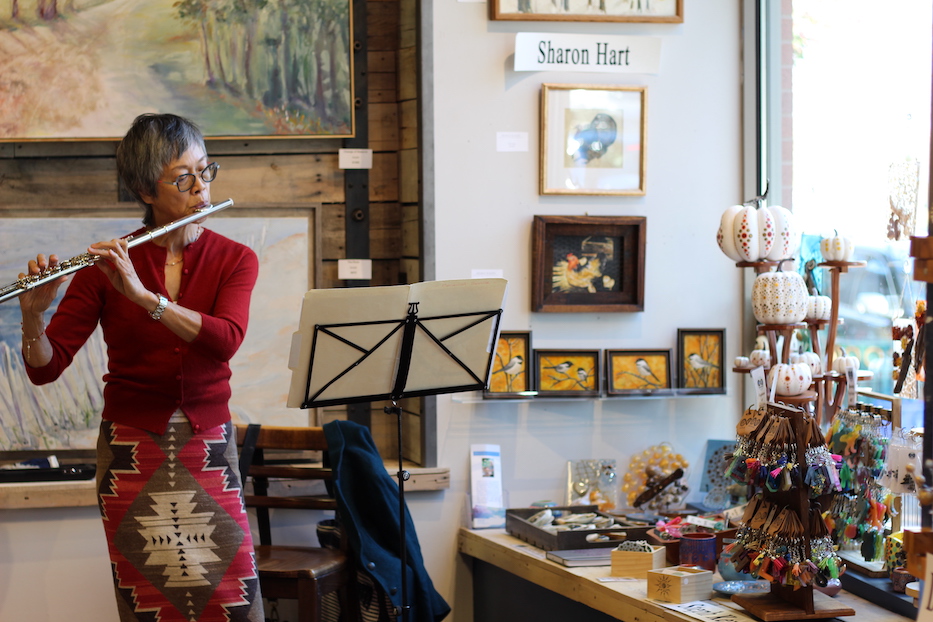 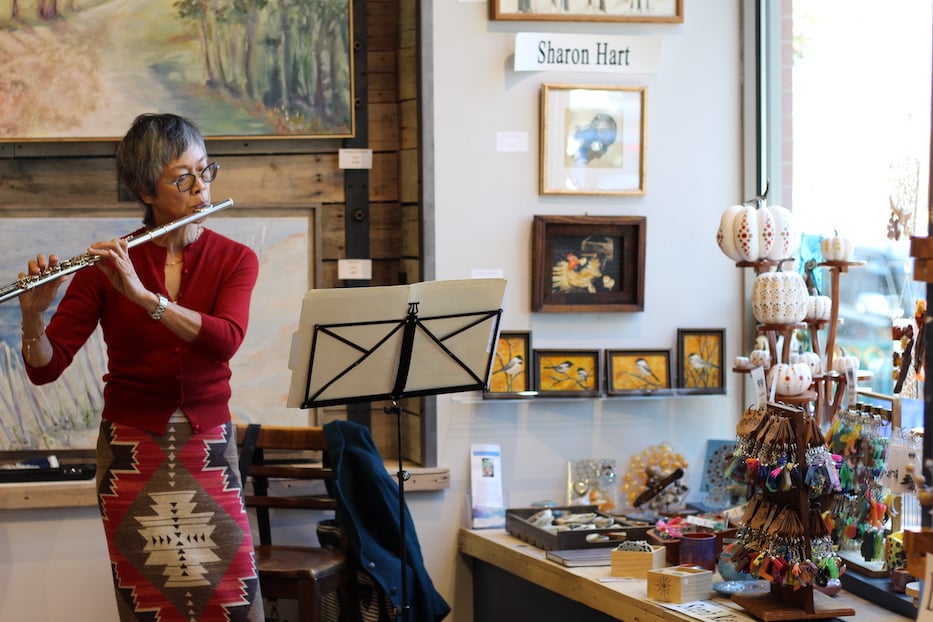 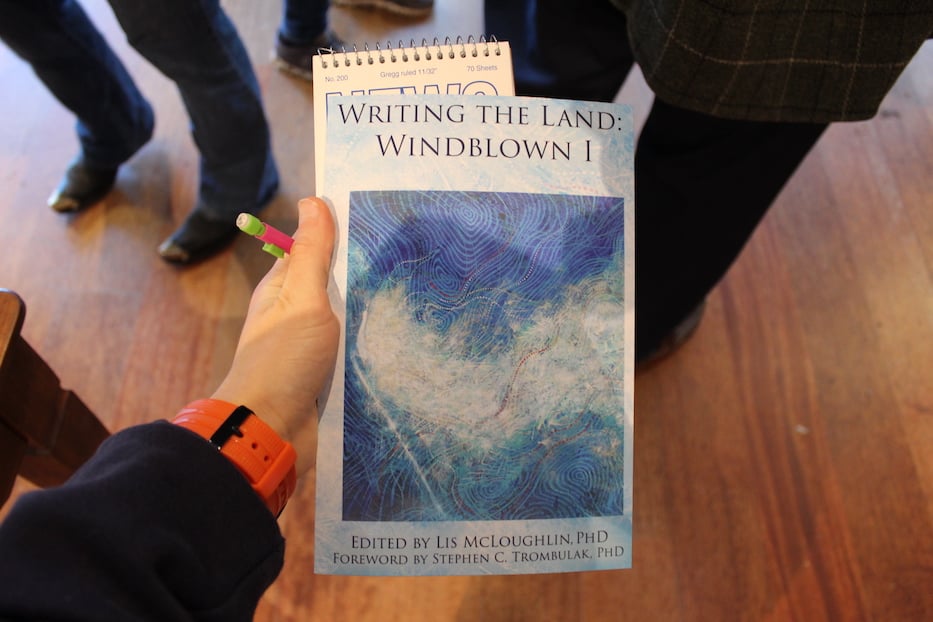 Laurel Peterson’s voice sailed through the Branford Arts and Cultural Alliance’s main street building, her words describing the Beacon Hill Preserve. On all sides, images of marshlands and grasses peeked out, as if they were listening.

Dozens gathered Sunday at 1004 Main St. in Branford, as the Branford Arts and Cultural Alliance (BACA) and Branford Land Trust (BLT) gathered to celebrate Writing the Land: Windblown I with an afternoon of art, music, and poetry. The book, now available through the BLT and participating land trusts, includes the voices of 25 poets from across the country writing on a total of 11 protected lands. Learn more about it here. 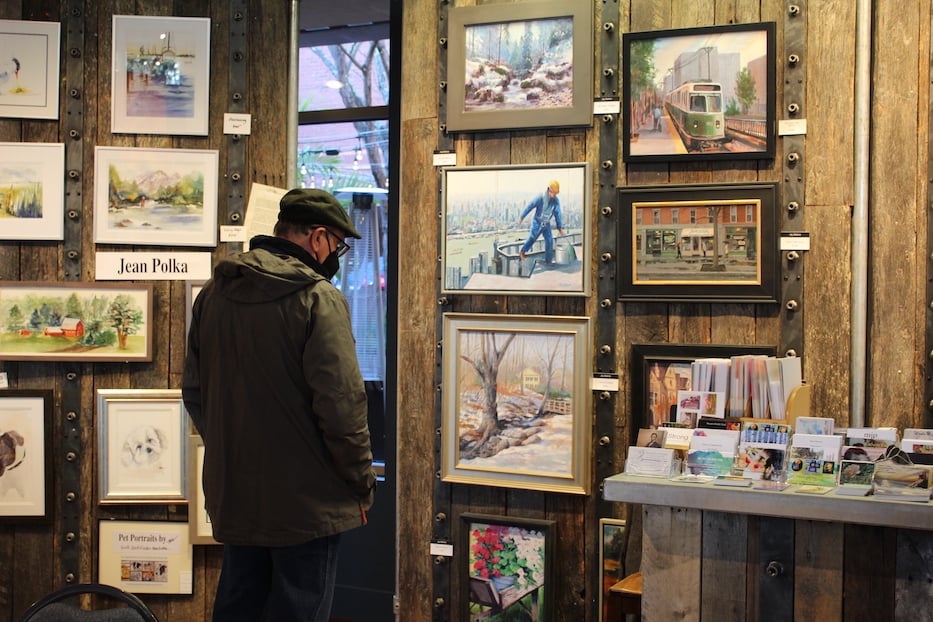 “It was natural to set up a union between BACA and the BLT to make sure that the message of environmental protection reaches everyone,” said BACA President Frank Carrano, who  helped pull the reception off without a hitch. "We offer all residents of Branford quality art so that everyone can enjoy it." 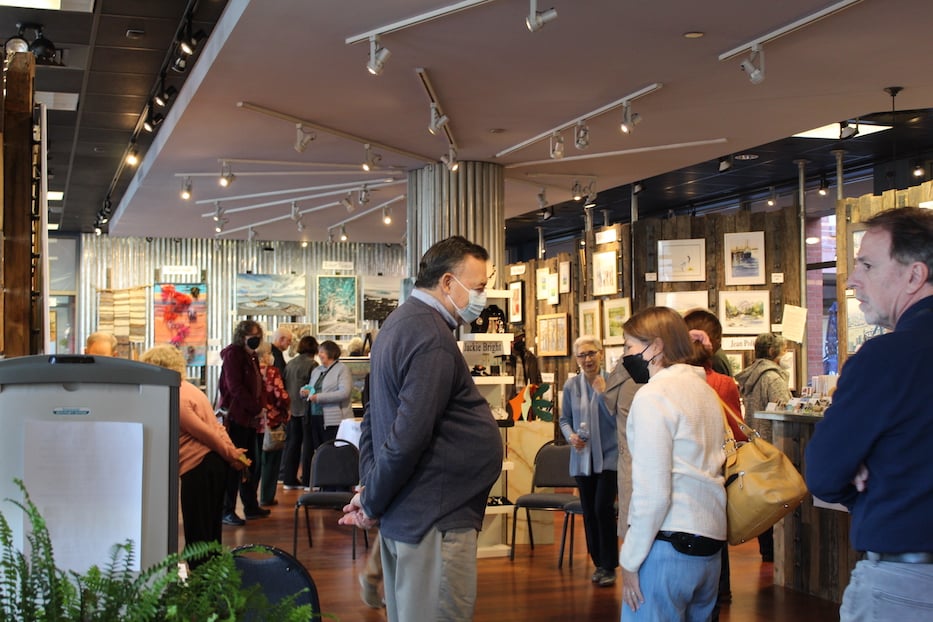 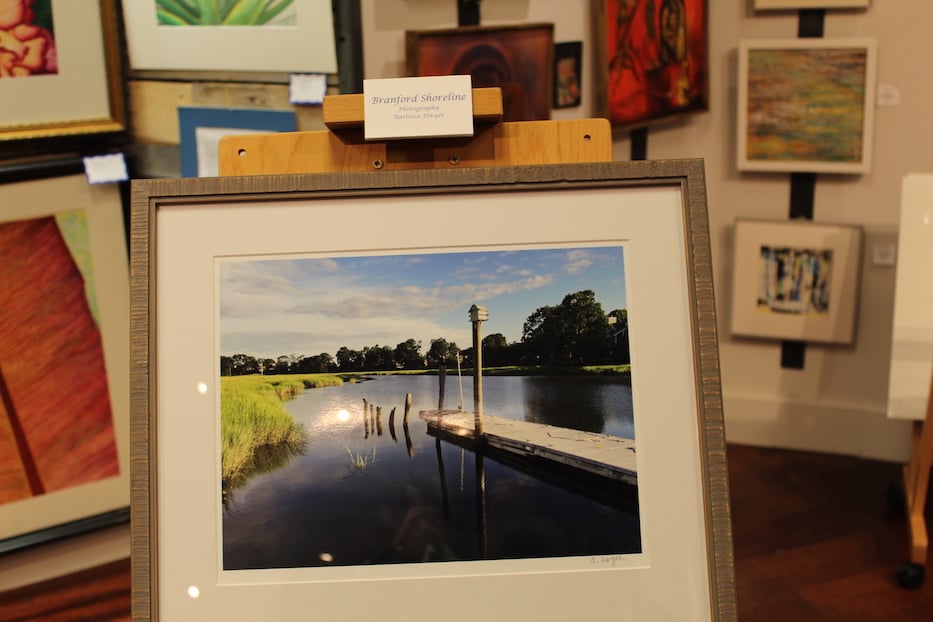 During the reception, Peterson read a selection of poetry from the book, the words springing vividly to life as visitors took in the multimedia images of marine life, quieting marshes and velvet-black waterways, flowers bursting into bloom, delicate woodland birds and sprawling grasslands captured in every season.

Her poetry in the book is dedicated to Branford’s Beacon Hill Preserve, one of several natural sites celebrated in the book, and a treasured place for Branford residents who know and love its trails and wildlife. In her poetry,  Peterson describes the affinity between beauty and nature, and calls to attention the need for the stewardship and respect of these shared lands.

In preparation for writing about Beacon Hill, Peterson walked through different paths and seasons to understand the nature and beauty around her.

"Each time I walked there, I saw something new," she said. "There is so much there—abundant bird life, grasses, wetlands, and lochs." 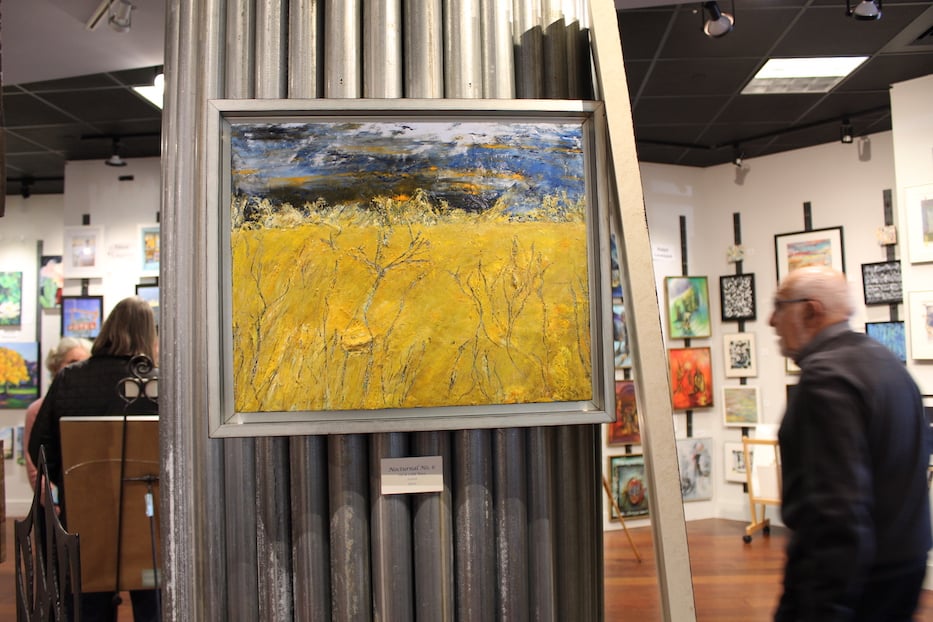 Many of the artworks around the BACA were also a tribute to Branford’s wildlife, and came with inspirational stories.

Sharon M. Hart's painting of a section of the town’s Trolley Trail and 27-acre Vedder Preserve was inspired by the story of her father-in-law, she said. Jennie Vedder, who later donated her property to the Branford Land Trust, used to let Hart's father in law clam on her property. In return, he and his family would give her clam chowder.

"I was inspired by Mrs. Vedder's devotion to family connection, and how much family history is on those lands." she said. "It is a true treasure." 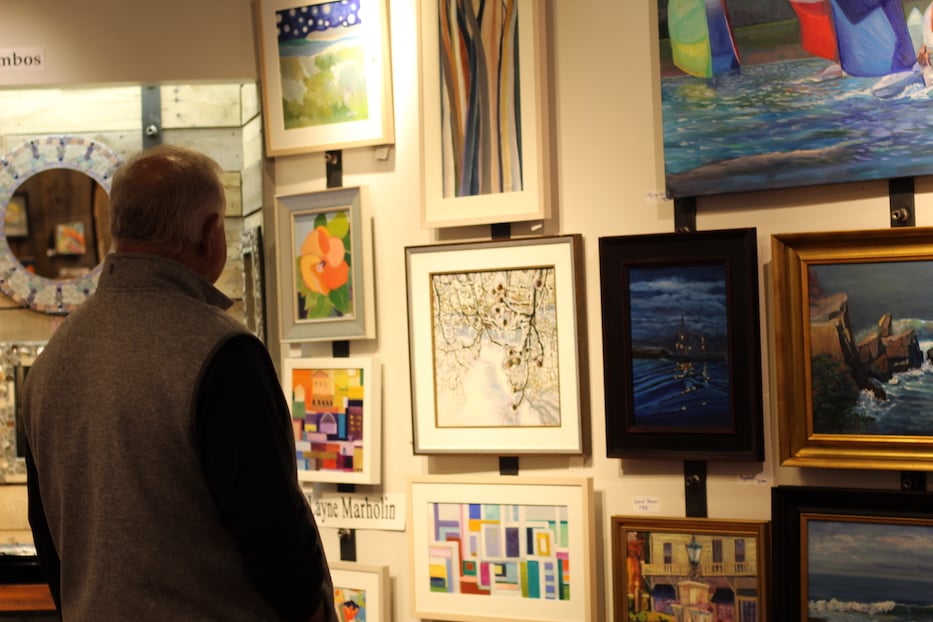 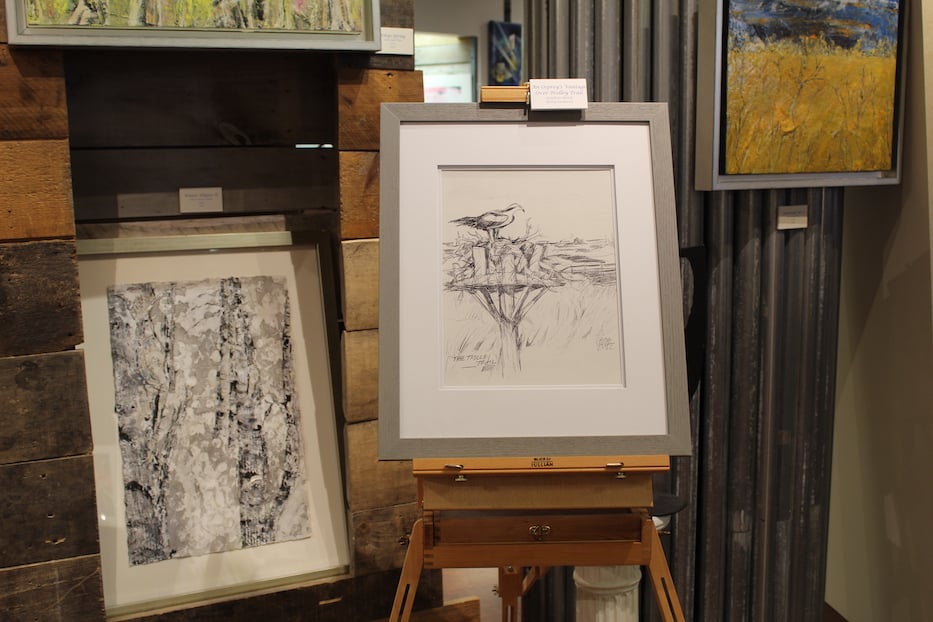 Other artists chose to dedicate their pieces to wildlife and animals, like Gerry Cassanova and his osprey sketches.

Cassanova grew up in Branford, but moved to New York in his twenties. He was a true city person, he said—and found coming to Branford fairly sedate.

That changed when he went to see the Trolley Trail and was enraptured by the ospreys and the otherworldly natural surroundings of the marshlands.

"I came down there everyday to watch the rhythm of the ospreys," Cassanova said. "For a city person like me, who only saw Manhattan pigeons—this was a whole other world."

Julie Wagner, president of the BLT, said that artists can play an important role in land conservation.

"Many groups do not strictly identify themselves as conservationists," she said. "Artists aren't really tree-huggers, but their work can help people understand how fragile our ecosystem is, and why we have to protect it."

This piece comes to the Arts Paper through an extension of YAJI, or the Youth Arts Journalism Initiative (YAJI). YAJI is a program of the Arts Council of Greater New Haven through which New Haven and Hamden high schoolers pitch, edit, and write articles for the Arts Paper. Read more about the program here or by checking out the "YAJI" tag.  Amelia Stefanovics is a senior at Hill Regional Career High School.