Cafe Nine Slows It Down 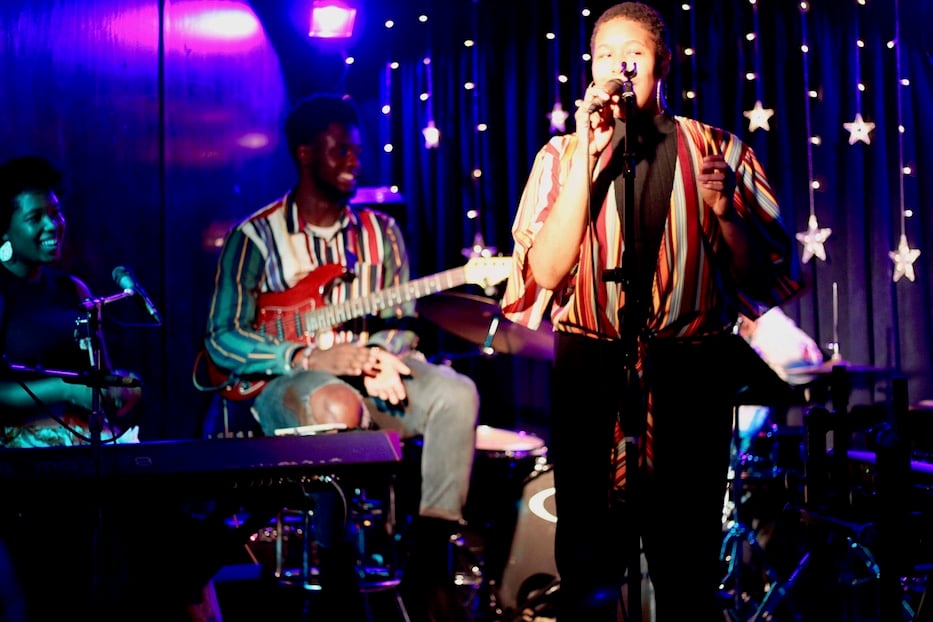 Ebony Griffith leaned into the mic, her face bathed in green and blue light. She hesitated, loosing a spray of soft, twinkling piano notes from her right hand. Her left traveled to her back, then back to the keyboard. Then she made a confession: it was her first time singing in public. Ever.

The audience cheered then hushed, as if it knew it was getting ready for a benediction.

Thursday night, Cafe Nine warmed up, cooled down, and found its groove with a double bill featuring Connecticut bands L & E: The Duo and Ab-sydian, two homegrown groups that are still starting their music careers. Close to 30 people came out for the concert, many dancing in their chairs and in the crowd by the end of the night. 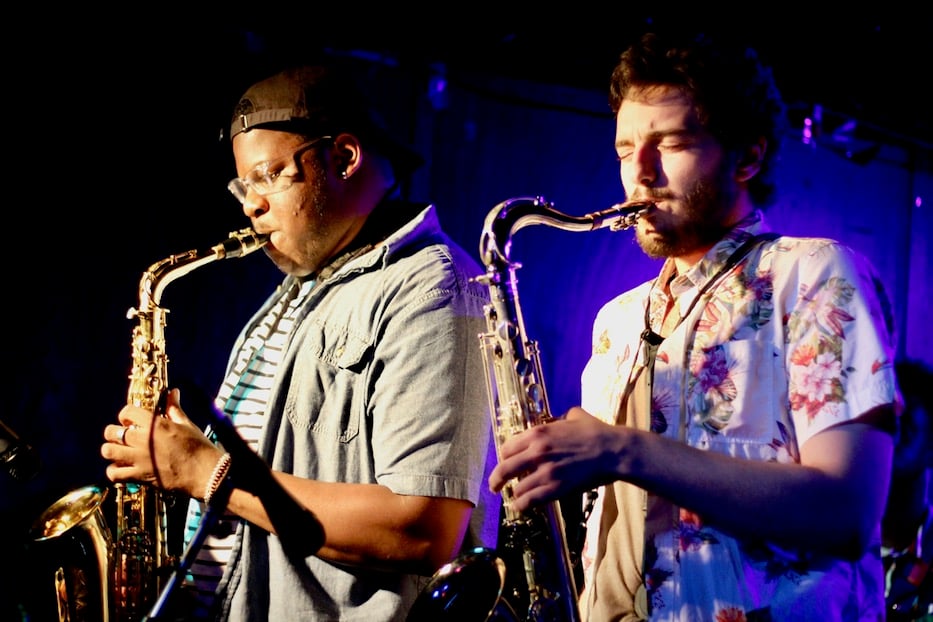 Based in New Haven, L & E comprises Lennix Cuffy and Ebony Griffith, now college students who met during their time at Sacred Heart Academy. Cuffy is a student at the University of Connecticut; Griffith is studying at Western Connecticut State University. Ab-sydian, of which Griffith is also a member, started earlier this year when a group of music students at Western Connecticut State University decided to form a band. After launching in January, the group started playing gigs in March. Members of both groups said Cafe Nine marks a New Haven first for them.

“We don’t know what the future holds, but we wanted to perform this summer,” Cuffy said during an interview outside the venue. "Like, it's time."

That easy, very much present spirit coasted over both sets, which fused new work with well-loved staples by Bill Evans, Stevie Wonder and Sade as well as Kendrick Lamar and PJ Morton (videos from the show are at the bottom of this article). Taking the stage close to 9 p.m., L & E kicked off the set with a mix of influences that have become particularly important to them: India Aria, Erykah Badu, and Jill Scott (both called Scott’s “Slowly Surely” their de facto anthem of the summer).

Cuffy’s voice coasted over the crowd like a prayer, somehow muscled and mellow at the same time. As the two jammed, the audience joined in, singing along to choruses, snapping, and waving their arms from a series of tables and barstools close to the stage. Taking cues from each other—a head nod here, a flicked wrist there—they harmonized, getting loud whoops and high fives from a few parents who had come to the show. 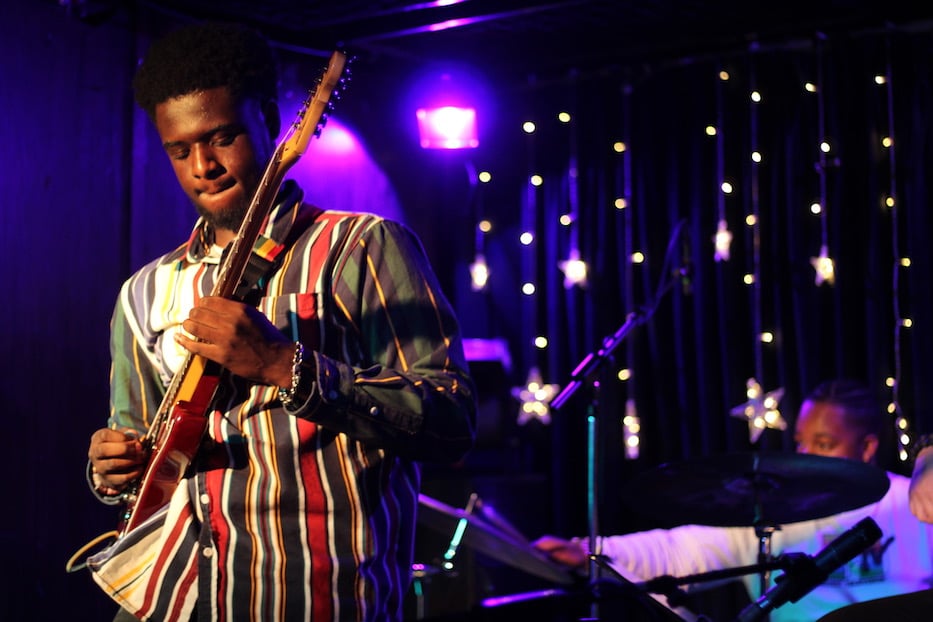 Cuffy said that in part, she’s embraced the duo because it gives her a platform to celebrate and remember her dad, who used to sing all the time. In the years since his death, she sings as a way to be close to him. It has rubbed off: Thursday night Griffith said she was inspired to sing too, close to the end of the set. After a soft, rising start, her voice filled the space, a delicate croon with spun sugar at the edges.

“This is the first time,” she told the audience to excited applause. “I woke up today and I chose to sing in public.”

“I’d been scared to hear my own voice,” she said later outside the venue, adding that she does not even sing in the car or the shower when she’s alone.

Back onstage, Ab-sydian ran through a sound check and got serious. A wailing saxophone cut through the air, joined by another. A small spray of sweat and spittle came off the stage. Drums sped up, then entered a frenzied, manic back-and-forth with bass and percussion. Keys and vocals broke in, a few attendees standing in their spots and starting to groove. Members stepped up to the mic and then back, giving each other a chance to get their musical footing.

The stage got hotter. In a wash of blue and pink light, David Merola tightened his grip on his tenor sax, pursed his lips and went to town. Stepping into offstage for a moment, alto saxophonist Reval Martinez nodded along, lowering his head to listen. Elsewhere in the crowd, a mere suggestion of a shoulder shrug became a full blown shimmy.

When Merola stepped back, he made room for a hammering, propulsive drum solo from Isaiah Schmidt, who had also played with L & E earlier in the evening. He stepped aside for twangy, jazz-flecked solos from Griffith on keys and Xavier Bertrand on guitar, then welcomed Martinez back onstage for a dizzying flurry of notes.

The group very much wears a Gen X timestamp—keyboard player Elisee Ngbo referred to Stevie Wonder’s “I Wish” as traveling “way, way back” in music history—but it’s one that invites a sense of experiment. Before the end of the night, members put their spins on work from Chick Corea to tracks from Kendrick Lamar’s 2014 untitled unmastered. 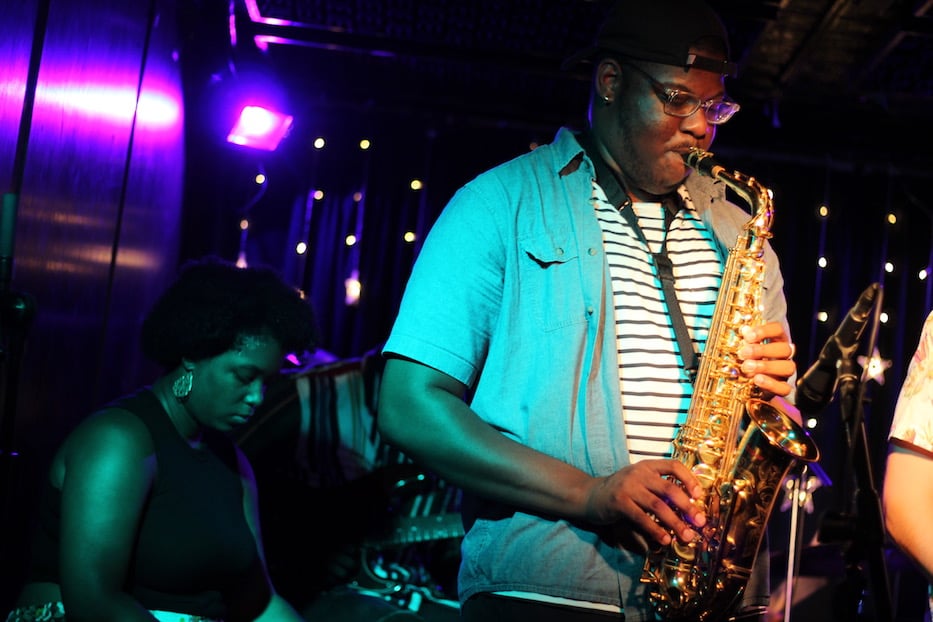 By the end, the audience was bobbing along to a rendition of Corea’s “Spain.” After that quiet fake out of the beginning—some attendees chatted right through it, not totally aware that the keys were part of the song—Merola and Martinez came on strong, speeding up the sax. Band members waved their arms, getting the audience to clap along. They peeled into a rotating door of solos, working through their own improvisations. The audience cheered through the final note. Then the band took a bow, and headed out into the cooling night.

Click below to see some of the music from the event.