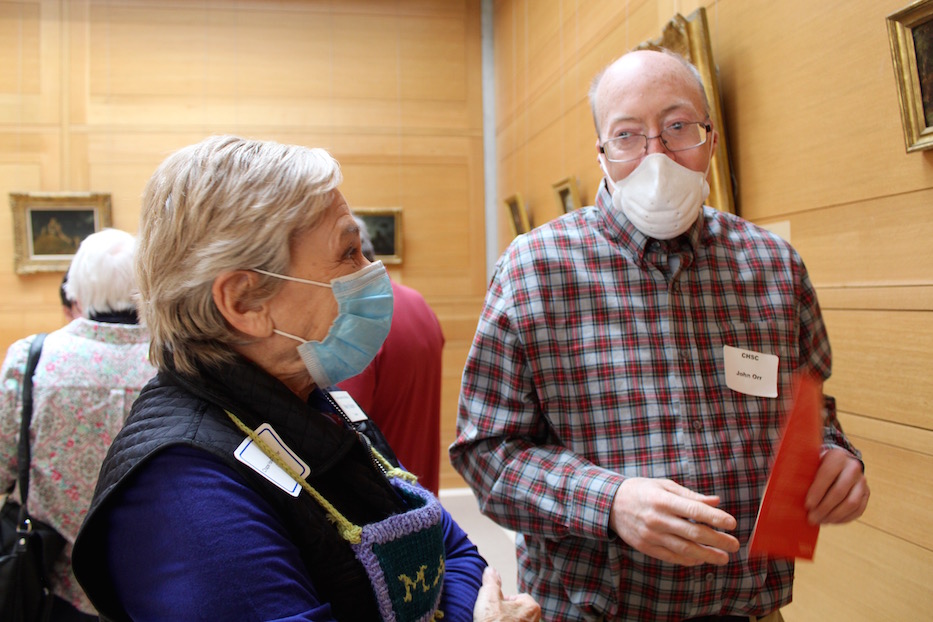 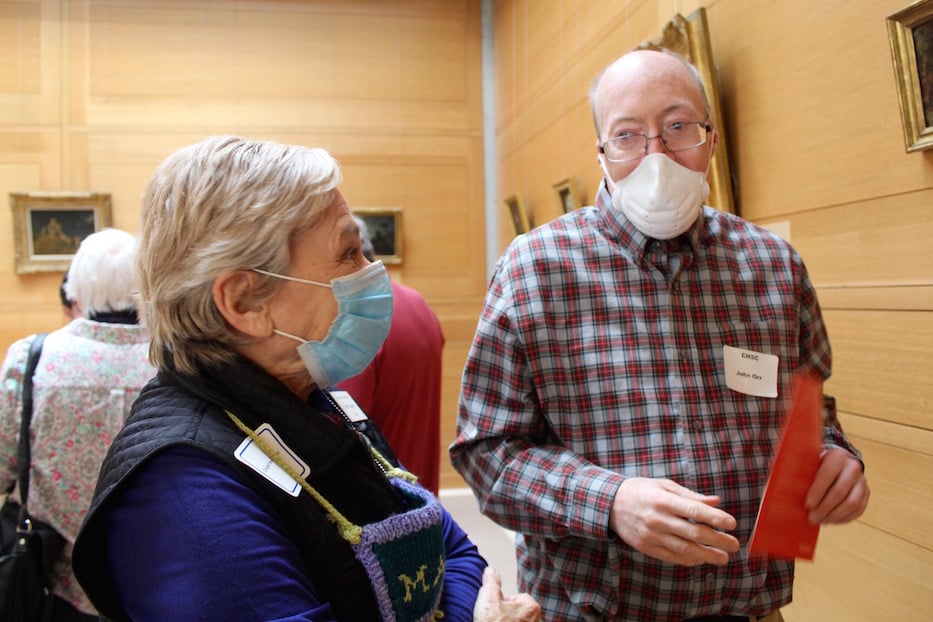 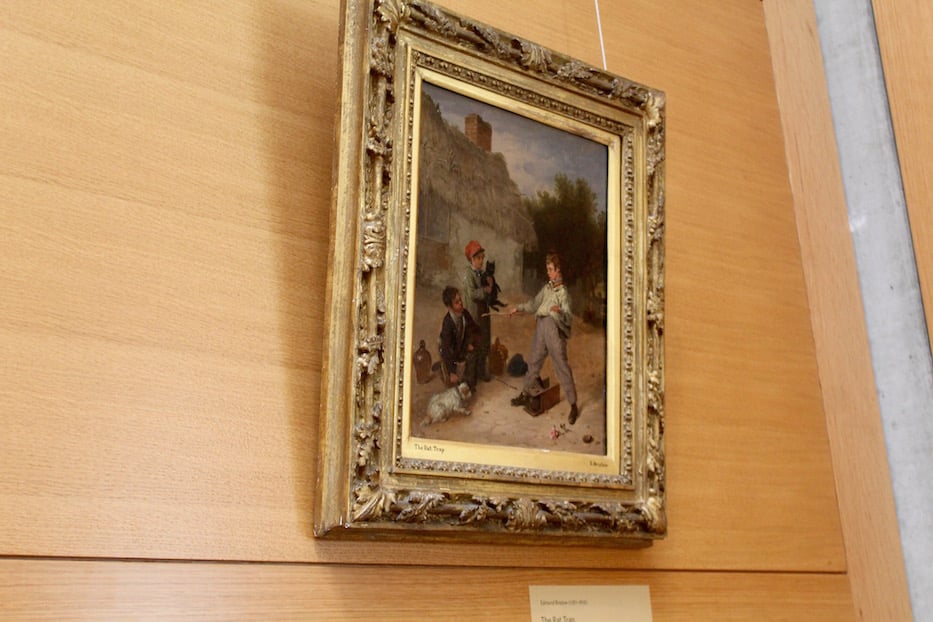 Top: Docent Mary Sagarin and John Orr at the opening Sunday. Bottom: The Rat Trap. Lucy Gellman Photos. The video at the end of the article is courtesy of the Yale Center for British Art.

When John Orr looks at the nineteenth century painting The Rat Trap, he sees three kids who are up to no good. In the work by British painter Edmund Bristow, a young boy points a stick at two friends, each of whom holds a small, furry animal. Between the boy’s feet, a rat stares out from the aforementioned trap, its pink paws visible. It reminds Orr of the days he spent watching three modern mischief makers—the Three Stooges Larry, Curly, and Moe—as a kid growing up in New York.

Orr is an artist, mentor, and affiliate of Chapel Haven Schleifer Center (CHSC), the Westville-based program teaching independent living skills to people with developmental and intellectual disabilities. Sunday, he joined friends, family members, and fellow Chapel Haven classmates for In Celebration of Our Neurodiverse Community, a two-week exhibition at the Yale Center for British Art (YCBA).

The exhibition turns Chapel Haven students into curators. Participants have picked paintings from the YCBA's vast collection, and written new wall labels with their personal reflections to the work. All of those works and wall labels are now displayed in the fourth-floor collections seminar room.

“This is a place that you can come and you can see pieces that come from other countries,” Orr said, surrounded by a salon-style hanging of paintings in the Center’s fourth floor long gallery. “It’s a great atmosphere.”

The program itself is a years-in-the-making extension of “Out To Art,” a collaboration between the YCBA and Chapel Haven that turns 12 this year. The show runs through May 15 in the fourth-floor collections seminar room. More information is available here. 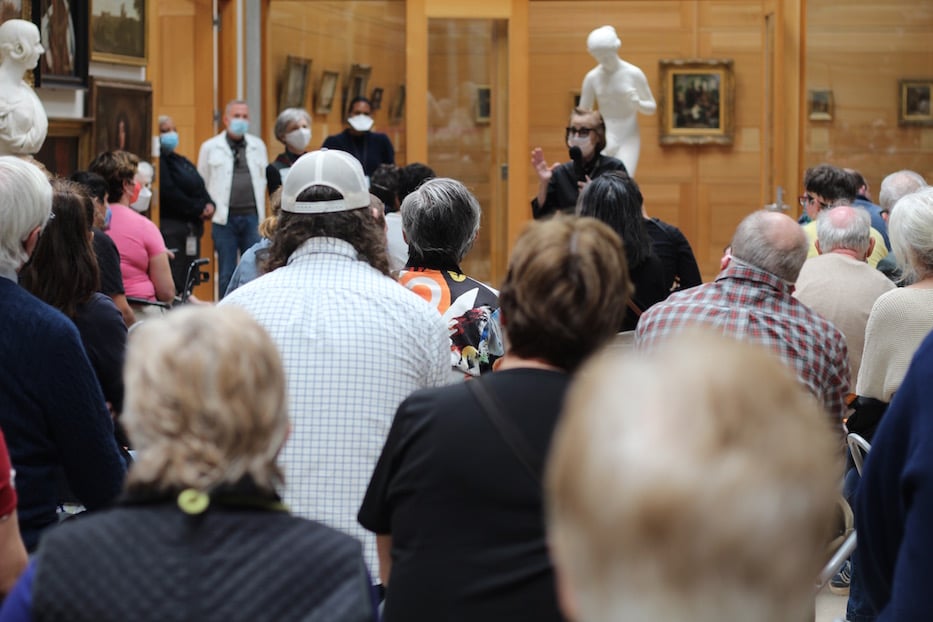 “Out To Art” is the brainchild of Linda Friedlaender, senior curator of education at the Yale Center for British Art, and Chapel Haven Art Director Tina Menchetti. Each year, they work with a handful of students in the organization's Residential Education at Chapel Haven (REACH) program. Many of the students are so enamored with the program that they enroll several times.

“Out To Art” was born in 2009, when Menchetti and Friedlaender first started talking about a way to make visual art—and arts institutions—more accessible to Chapel Haven’s students. At the time, Menchetti had tried student field trips to other galleries in the city, and found that staff often weren’t equipped to handle visitors who communicated and perceived the world around them differently. On one particularly upsetting occasion, a group from Chapel Haven was escorted out of a gallery after a resident got too close to a painting.

Menchetti knew there had to be a different way to expose students to art—and to get museums and galleries on board with visitors who had different needs. Friedlaender, whose tenure at the Center has also included work with the Yale School of Medicine, Yale Child Study Center, and the Center’s “Exploring Artism” program, stepped in to fill a gap. She is quick to say she does not do anything alone, and has had the full support of YCBA staff and leadership in building out the program.

“It was her idea to create a class,” Menchetti said, gesturing to Friedlaender with a bright, big smile Sunday. At the YCBA, Friedlaender trained gallery staff, volunteer docents, and security guards in working with adults who have different developmental and social skills. Each September through June, a group from Chapel Haven came to the Center for two hours once a week, eager to learn more about works in the collection and the inner workings of a museum. She called the then-nascent program “Out To Art.” The title—and the mission—stuck. 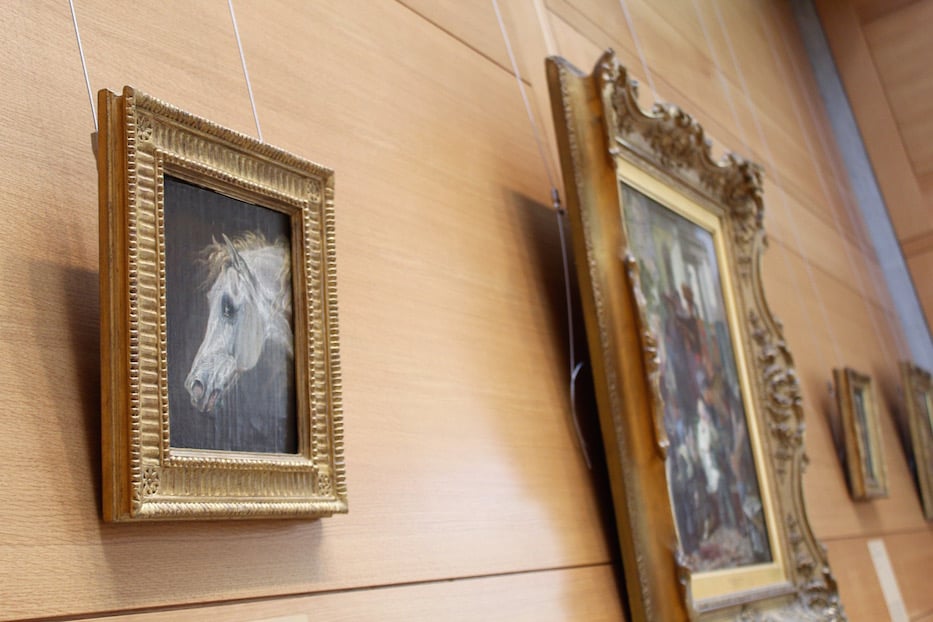 Martin Theodore Ward, Head of a Grey Arabian Horse. "I've always had an affectionate spot for streamlined paintings, and the way the horse is looking at the viewer—you, in this case—is comforting and it's definitely something I would be hanging up on my wall," Andrew Burbank writes in an accompanying label. "Very simple background, not a lot going on."

To celebrate their 10-year anniversary, they started to build the bones of In Celebration, which has been in the making for over two years, in 2019. Using 20 works from storage, they turned the walls of a classroom at the YCBA into a mock installation space. From there, they embarked on some of the same close looking that curators do when they are building a show for the general public.

When the Center closed indefinitely March 2020, Friedlaender and Menchetti knew they wanted to keep the program going. Friedlaender trained the Center’s team of docents on Zoom, making the YCBA one of the first museums to brave the pivot to online learning. Unable to meet in person, they used digitized works from the collection to craft lectures, close looking sessions, and virtual tours. When it was safe to do so, Friedlaender, Menchetti, and docent Berclee Cameron took printouts of those paintings to Chapel Haven’s Westville campus to resume work on In Celebration.

“This exhibition was treated no differently than any other exhibition,” Friedlaender said. YCBA staff worked across departments to design and print exhibition booklets, plan out the gallery, and ultimately install the works and labels.

At Chapel Haven, 13 “Out To Art” participants became curators, culling the collection of 20 works into an intimate 11. Over several weeks, they wrote and rewrote exhibition labels with personal reflections, drawing on their own memories as they looked closely at the works. In one label, Andrew Burbank writes that Martin Theodore Ward’s Head of a Grey Arabian Horse is comforting for how streamlined and straightforward it is. Across the room, Debbie Goldman praises Ben Nicholson’s oil-and-pencil 1934 (still life), in which minimalist shapes float across blocks of color. 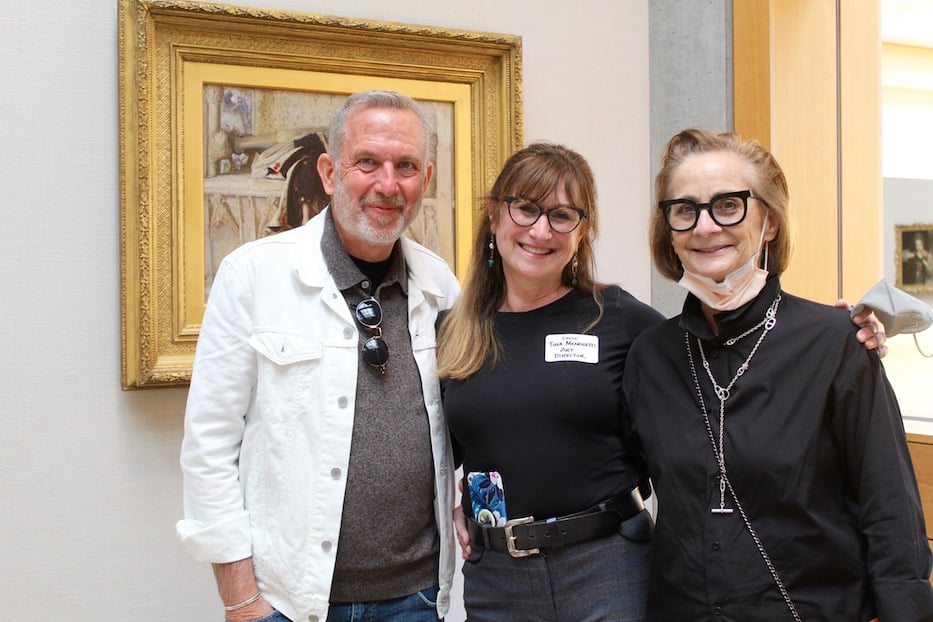 It was very much a team effort, Friedlaender said. An accompanying exhibition brochure thanks 22 docents, 16 security personnel, seven art handlers and installers, 13 CHSC students, a small accessibility working group, and staff and administrators at both the YCBA and Chapel Haven. A video team from Yale Media Services documented the process, cutting eight hours of tape into an eight-minute video that plays on loop in the gallery.

“We wanted to show that it takes a lot of time, effort, and hard work,” Friedlaender said. She and Menchetti have since submitted a conference paper on the collaboration, and are waiting to hear whether it has been accepted.

Some members of the Chapel Haven family, like Orr, have returned to participate in “Out To Art” year after year. As an artist himself, Orr became a head mentor in the program, walking many of his peers through the collection. He and a few other participants also call themselves “art guards,” and will tell YCBA visitors if they get too close to a given work on display. In over a decade, he’s become particularly fond of certain guards and docents, who he now knows to expect when he comes into the building. He has a soft spot for Richard Johnson, the former head of installation, who worked on the exhibition.

Sunday, Orr sat in the Center’s Long Gallery with docent Joy Marks and fellow Chapel Havener Debbie Margolis, chatting about the works that made it into the show. During the curatorial process, Margolis was drawn to George Chinnery’s portrait of Josiah Andrew Hudleston, an English and Irish guitarist and composer who lived in the nineteenth century. 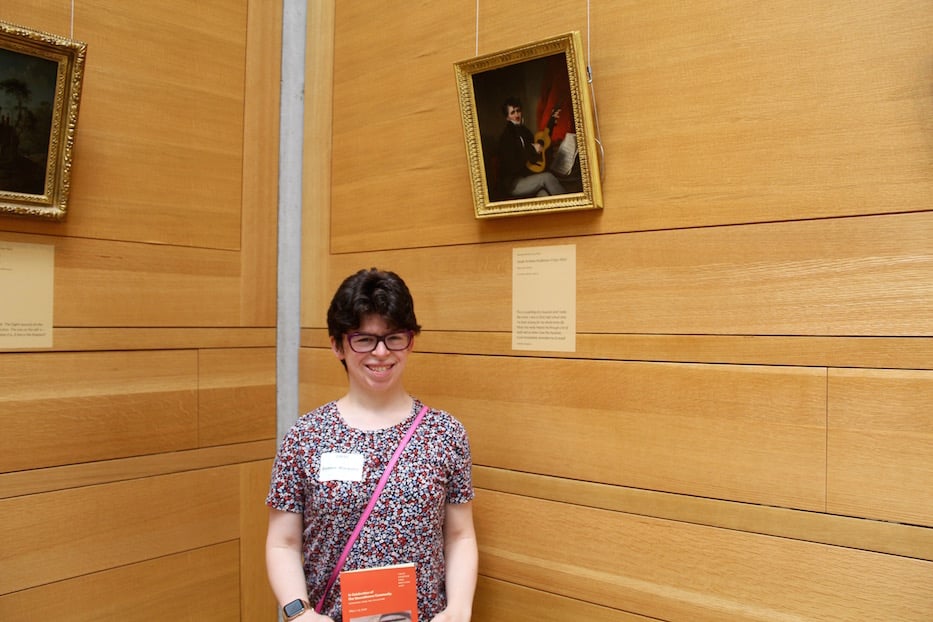 "It’s really opened my eyes to showing me that I’m smarter than I think I am,” Debbie Margolis said.

While the pick is timely for several reasons—Hudleston has had something of a musical moment since his works were rediscovered in a basement 30 years ago—Margolis gravitated toward the memory of her own music making. When she saw the piece, it spoke to her.

“This is a painting of a musician and I really like music,” she writes in an accompanying label. “I was in [the] high school choir. I’ve been singing my whole entire life. Music has really helped me through a lot of stuff, and so when I saw the musician, it immediately reminded me of myself.”

Margolis added that the exhibition changed her understanding of not just the art that is accessible to her in New Haven, but also the projects of which she’s capable. She joined the “Out To Art” program after arriving at Chapel Haven in September 2020, in the thick of the pandemic.

“I didn’t believe that I could do an Ivy League class,” she said, framed by the bright, floor-to-ceiling walls of art in the YCBA’s Long Gallery. “To me, the Ivy League is as smart as smart can be. It’s really opened my eyes to showing me that I’m smarter than I think I am.” 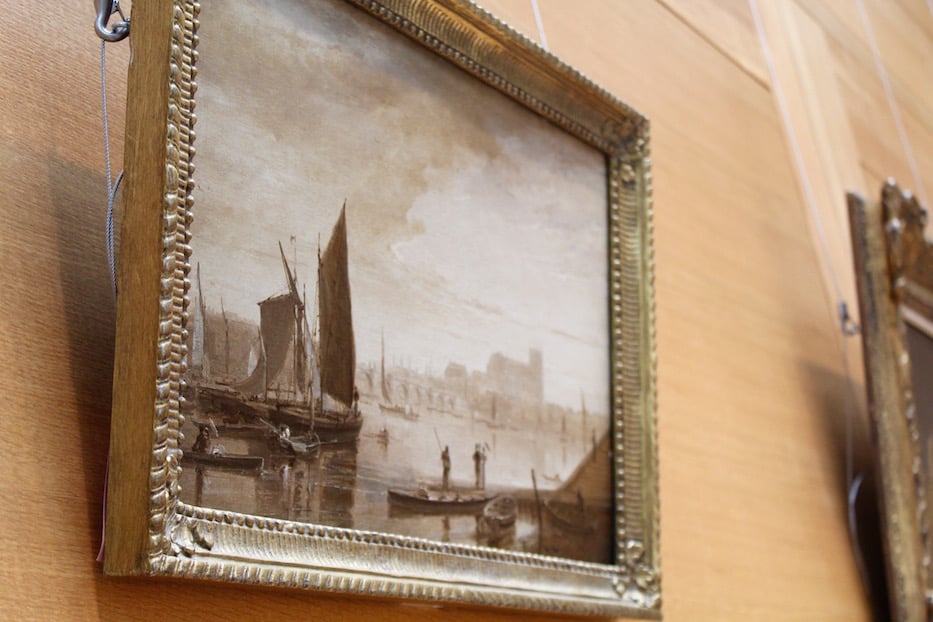 Thomas Hollis, Westminster Bridge and the Abbey. "It kind of reminds me of when I was growing up, actually," writer Payder Nelson in an accompanying label. "My family and I used to take long walks around New York, and I remember that—near the water."

Back in the seminar gallery, Orr and docent Mary Sagarin chatted in front of The Rat Trap, trading their real-life memories of the not-so-cute vermin. Sagarin, who wore a large, soft and knitted nametag around her neck, remembered coming down to her kitchen one night, and feeling the furry, warm touch of a rat as it scurried across the floor. Orr recalled working at a nursery in Cheshire, where his job included keeping rats out of fresh seed. He once went to bury a rat—Sagarin shuttered reflexively as he conjured the image—and hit a PVC pipe, soaking himself as it exploded.

A few feet away, Margolis showed off the portrait of Hudleston as her parents looked on, studying the musician that their daughter now knew so well. Nearby, small paintings of Westminster Bridge and Abbey and Somerset House took on a new life with words from Payder Nelson and Rick Savard. Gabby Russell’s label breathed new life into Charles Brooking’s English Ships Running Before A Gale, as she observed “it looks like they’re going somewhere, but the waves are not cooperating.” On the other side of the room, the video played quietly, walking viewers through the process of building the exhibition.

Just outside on the fourth floor, sunlight streamed in and danced across the building’s open, airy plan. Eleven newly minted curators prepared to head back to Chapel Haven for a pizza party. “Out To Art” showed no sign of stopping anytime soon.

“They’ve embraced this building,” Friedlaender said of participants in the program. “They feel safe here. They know who they’re gonna see. They know that this is a place where they belong.” In Celebration of Our Neurodiverse Community runs through May 15 in the fourth-floor collections seminar room. More information is available here.