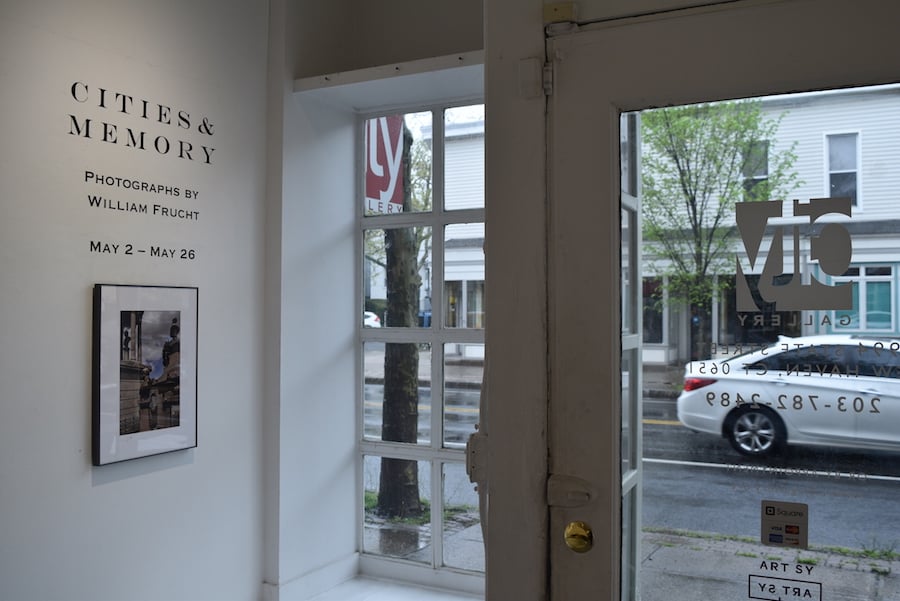 In the window of City Gallery this month, three dolls gaze out at passersby from the frame of a black and white photograph. One has a soft, flat face, with Betty Boop features embroidered on the cloth. Another is a bit disheveled, with arched brows and a smile that looks more like a grimace. The third reaches out from the frame, as if searching for a childhood interrupted and left behind.

The image was created by William Frucht, a City Gallery member and a photographer who specializes in photographing abandoned places. It’s part of Cities and Memory, which collects photographs the artist made on a recent trip to South America, focusing on two abandoned mining towns in the Chilean desert—each one dusty, crumbing, and desolate—and a cemetery in Buenos Aires.

“I told my wife that if we spent two days at these abandoned mining towns, she could decide the rest of the trip,” Frucht said on a recent afternoon in the gallery.

Frucht’s wife, Candace Ovesey, chose Santiago and Buenos Aires as destinations. While in Argentine capital, she brought Frucht to Recoleta Cemetery, just blocks from their downtown hotel. Frucht said that at first, he wasn’t really interested—“but the minute we set foot in there, I was overwhelmed.”

Frucht found Recoleta to be packed full of mausoleums in “dozens of different styles, cheek by jowl.” Though he didn’t set out with the intention to photograph it seriously, he was struck at every corner by visual reminders of the way people remember their ancestors and their past.

“I found that astonishing and it kind of forced its way into the series,” he said.

What’s astonishing in the gallery is the way some of the photos taken at Recoleta are the liveliest images in the exhibit. In “The Population,” statues are layered over statues, monuments over monuments in jostling layers of stone. The figures face in different directions, recalling pedestrians crossing a busy intersection. In an exhibit that makes a display of desertion, this is a crowd.

Under Frucht’s lens, the deserted mining towns Humberto and Santa Laura take on new characteristics."Enclosure, Humberstone," for example, which depicts four crumbling walls with no roof above, is all about texture. There are the rust colored waves of corrugated metal and the rough wooden beams.

Then rgw back wall is covered in something that looks like barnacles and the ground below crusted over and cracking.

At times the structure looks like sandpaper, at others, like terry cloth, and at still others, like a peeling sunburn. And it all contrasts with the cloudless blue sky above it, which is completely flat in texture and rich in color, like a smooth wash of watercolor or gouache.

In a series of four black and white photos from Santa Laura, it’s as if the objects have moved into the absence left by the people who used them. 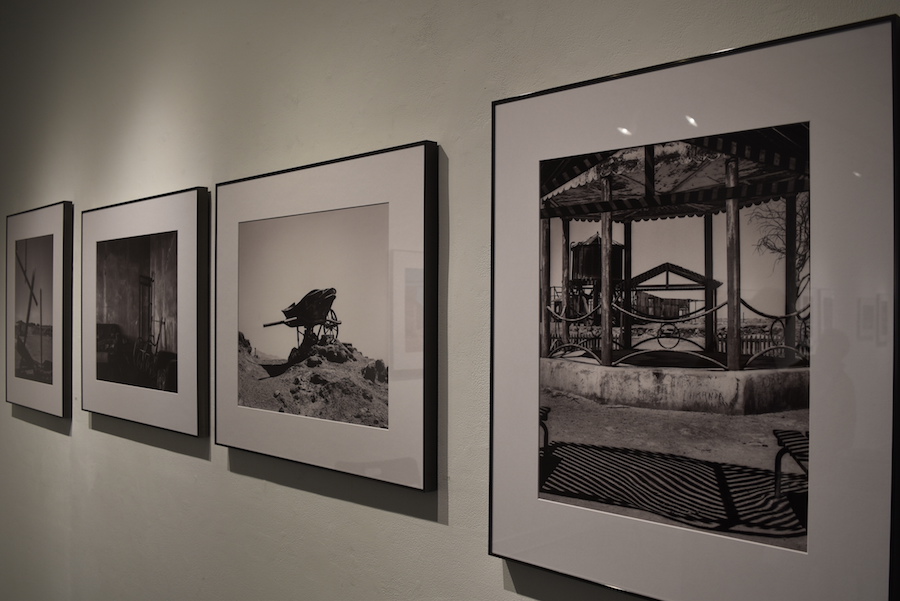 The remains of a structure in the main square have fallen almost to the ground. The pieces hang suspended, drooping and sagging like they’ve lost hope.

A wheelbarrow sits on a tiny stone outcropping, photographed at an angle that makes it look like a mountain. It’s as if the wheelbarrow is staring into the distance, looking to see who will come walking over the hills.

Light falls softly through a window onto the bare frame of a rocking chair. Highlighted in this way, the chair itself almost becomes a seated figure, waiting for someone to come home. The image leaves the viewer asking, “Who is absent from that chair?”

The photographs highlight shape and tone and shadow. They feel flat and smooth rather than deep and textured, and they have a certain cinematic quality to them. Taken together, it feels like they’re trying to tell a story.

Indeed, the pairings in this exhibit—for which Frucht credits art framer and installer Dwight Pederson—often amplify the impact of individual pieces.

The lace laid lovingly over a coffin in “Mother and Infant, Recoleta” is echoed perfectly in “Wrought Iron, Recoleta”—except instead of lace, the latter image captures the drape of light and shadow through the wrought iron door onto the stone interior of a family mausoleum. 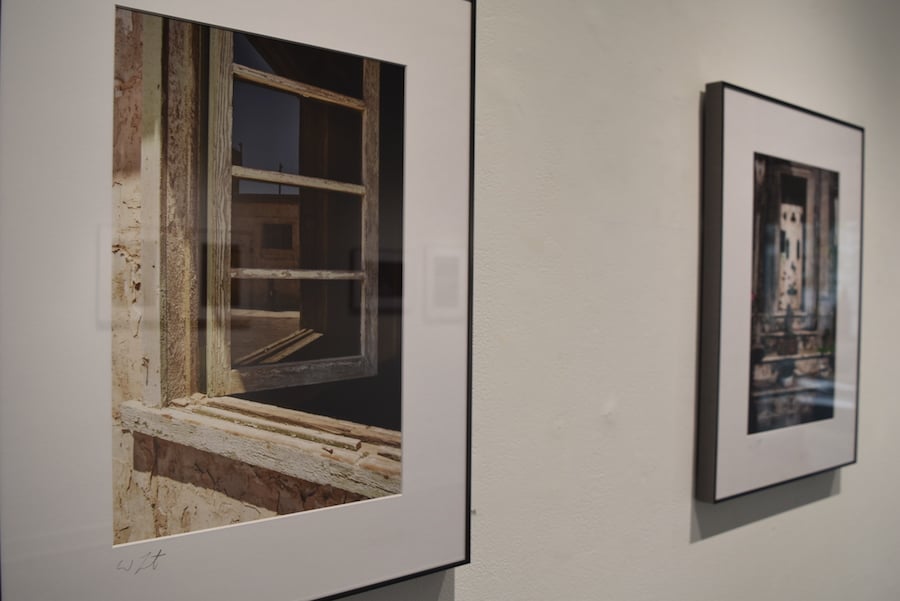 In “Shed, Humberstone,” a spray of sparkling light shines through hundreds of holes in the walls of the abandoned structure, like a sky full of stars. Adjacent, “Ferns and Glass, Recoleta,” shows just a few speckles of light on plaster walls and the light catching the edges of a cut-glass vase.

That quality of light is what Frucht says draws him to photograph in abandoned places. Asked what he hopes to uncover about these places in his photographs, he said that “in simplest terms,” it’s about “good light and interesting forms.”

“One of the biggest attractions about abandoned interiors is that they’re not artificially lit,” he said. The natural light “can be just exquisitely beautiful. It’s often not much more than that.”

But as he recalled the story of Humberto and Santa Laura, it became clear that there might be a bit more to it than he lets on.

Three or four years ago, Frucht sold a photograph to someone who had just moved to New Haven from Santiago. “He told me, ‘If you like abandoned places, you’ve got to come to Chile,” recalled Frucht.

Humberto and Santa Laura were once company towns in northern Chile, built around saltpeter mines—the nitrite-rich substance used in fertilizers and gun powder. In the 1800s, the towns were bustling with foreign investment and filled with families, schools, and plenty of arts and culture. But when a synthetic substitute for saltpeter was discovered in the mid 1900s, the mines closed and the towns collapsed around them.

Frucht is not alone in wanting to capture a bit of that past. Both towns were declared UNESCO World Heritage sites in 2005, and are now visited by intrepid travelers touring the Atacama desert.

Frucht appears to be drawn to places that hold on to the past like a soaked sponge, dripping with ghosts—places that every city seems to have—and his photographs in this exhibit catch and frame many of those spirits.

“These are things that were once intensely important to people and are not anymore,” he said. “They are signs of a different life.”

William Frucht's Cities and Memory runs at City Gallery through May 26. City Gallery is open Thursday through Sunday 10 a.m. to 4 p.m. or by appointment.