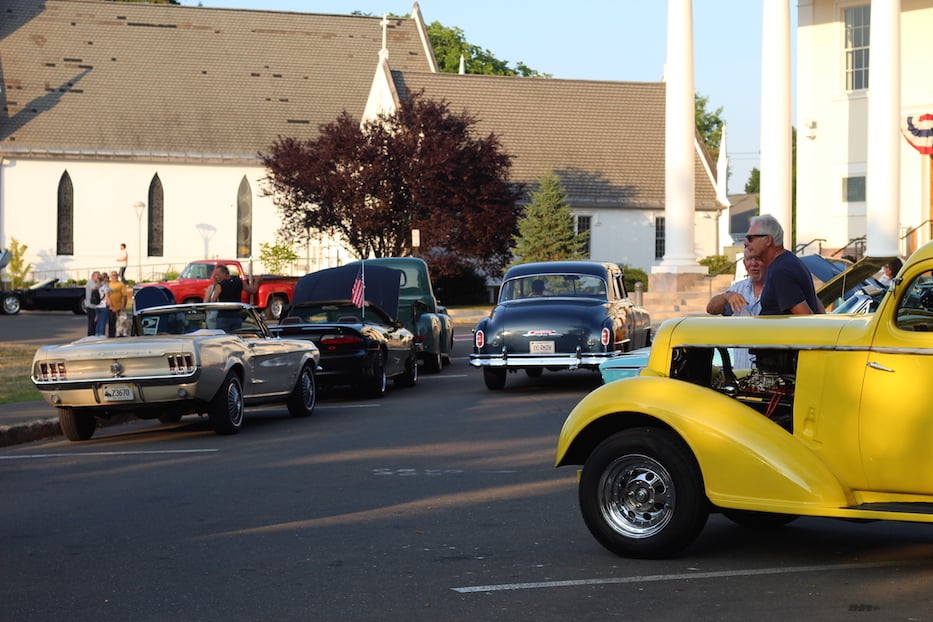 As Elvis Presley’s “Blue Suede Shoes” drifted over the Branford Green, Andy Anderson set out a blue lawn chair behind his 1957 bumblebee black-and-yellow Ford. Anderson took in the growing crowd and thought back to the decades he’s dedicated to classic cars.

Earlier this month, Anderson was one of roughly 40 car lovers and attendees to come to the Branford Green for the second monthly “Shake Rattle & Roll,” an annual celebration of classic cars in the center of the town. Organized by the Branford Parks and Recreation Department, the car show runs each Wednesday through the end of the month. It is the first year that the show has taken place on the Green.

Classic car lovers and curious locals alike come to see the cars, listen to the classic 50s music, and just sit on the Green. The next iteration of Shake, Rattle & Roll  is Wednesday July 20 from 5:30 p.m. to 8 p.m. A final one will follow on Wednesday July 27.

With cars lining Town Hall Drive, guests walked, took pictures and even got a chance to sit in some of the cars. 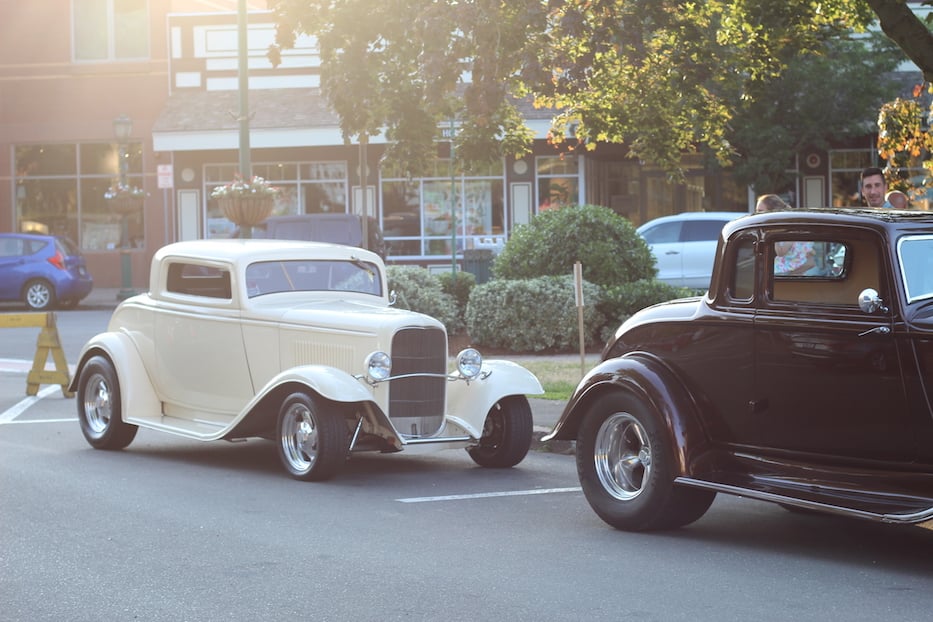 Some car owners, like Anderson, are professionals in the car business. Born and raised in Branford, Anderson got his start in cars racing for a team. Later, he worked for a racing company, and finally, he started his own classic/antique car resale business, Blasts from the Past, in 1987 out of his home in Branford. His whole family has a car legacy: They have been racing and working with cars since 1911.

“Cars are in our blood,” he said. “My son worked for Nascar and raced our own cars in the super-late models division.”

Anderson recently bought a 1957 Ford from California, and had it shipped to Connecticut. The Ford is a “resto-mod,” a restored-modified car that has many new parts so that it can be used as an everyday car. 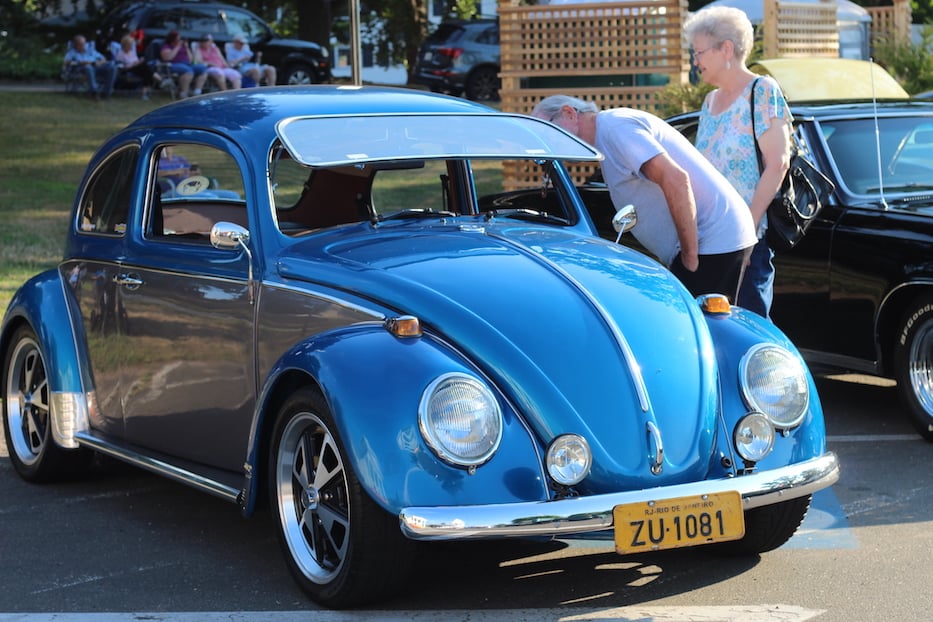 Others brought their family cars to show. Alex and Carolyn Santos showed off their 1965 Volkswagen Beetle, originally from Rio de Janeiro in Brazil. Alex Santos, who is Brazilian, had the VW Beetle shipped from Rio to the U.S. The family uses the car, which is fully restored, every day.

“We've only had it a couple of months,” Santos said. “It’s quite a good car.”

Tony Delfino came with his 1963 Ford convertible, which he called his favorite car. He’s been interested in cars since his late teens, and at one time owned a 1959 Chevy convertible race car and 1959 Ford Galaxie convertible. He even nurtured that love during his six years in the U.S. Army, as he saw different automobiles and modes of transportation in places including Antarctica, Alaska, and Russia.

Delfino did not find his car by chance. 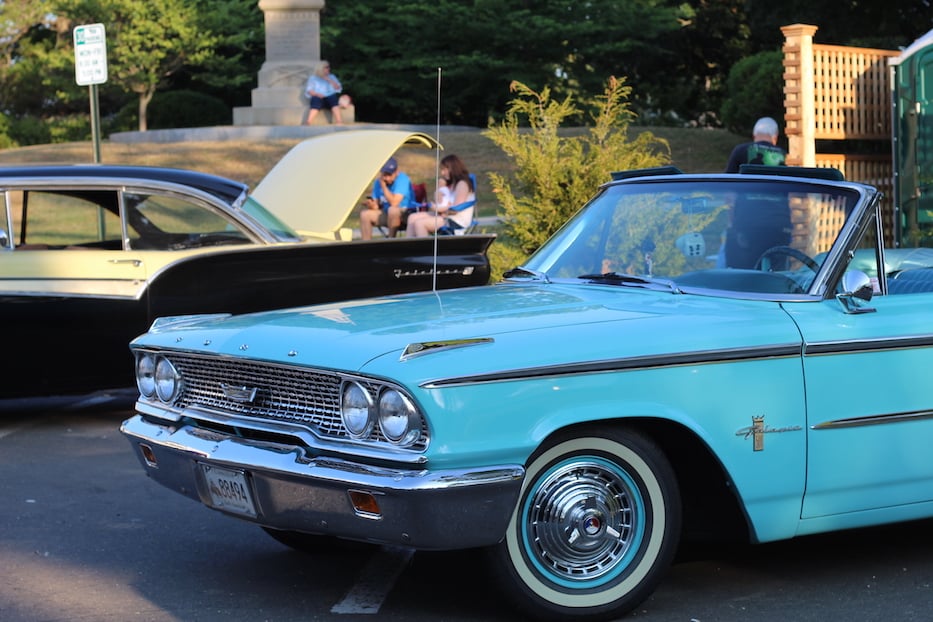 He connected with an online antique car dealer in Newark, Ohio, who hinted about a ‘63. Delfino drove out to Ohio and found his blue Ford. He is the third owner of the classic car; when he received it, the car had 8,000 miles on it.

There needed to be adjustments, he said. The type of paint they used in the 60s was either enamel or lacquer, so Delfino repainted it so that it would be glossier and have a higher sheen. He also replaced the engine and transmissions in order to travel longer distances. The seats were replaced five years ago.

“It was easy to restore,” Delfino said. “I can do the repairs on these cars by myself, even though I’m not a professional mechanic. In new cars, nothing can be repaired by hand - it has to go to professional [for] repairs - but my blue car only needs a single toolbox.”

Shake, Rattle & Roll takes place each Wednesday in July from 5:30 p.m. to 8 p.m. on the Branford Green. This piece comes to the Arts Paper through YAJI Summer Camp, an initiative of the Youth Arts Journalism Initiative (YAJI). YAJI is a program of the Arts Council of Greater New Haven. Read more about the program here or by checking out the "YAJI" tag.  Amelia Stefanovics is a rising senior at Hill Regional Career High School.