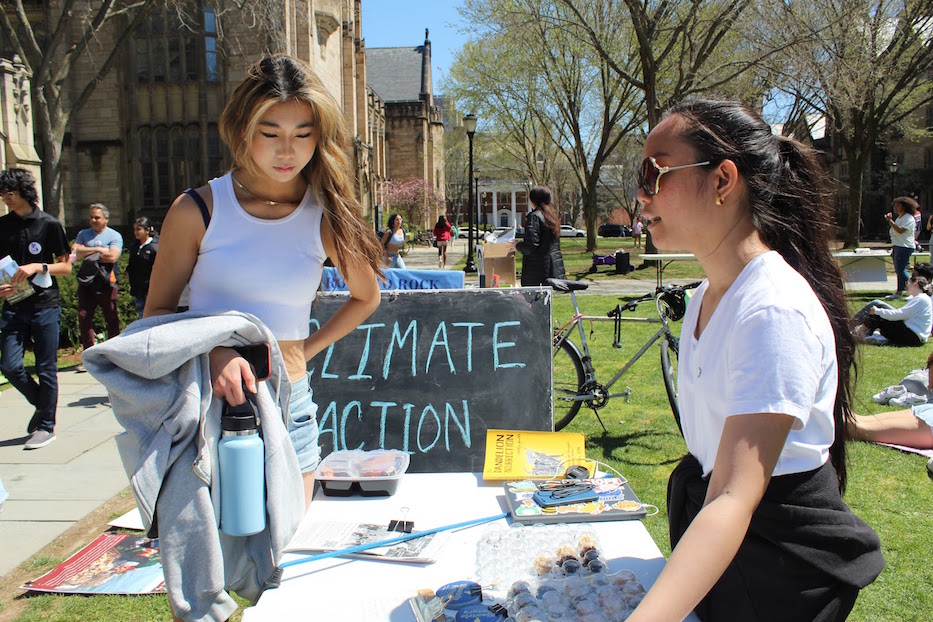 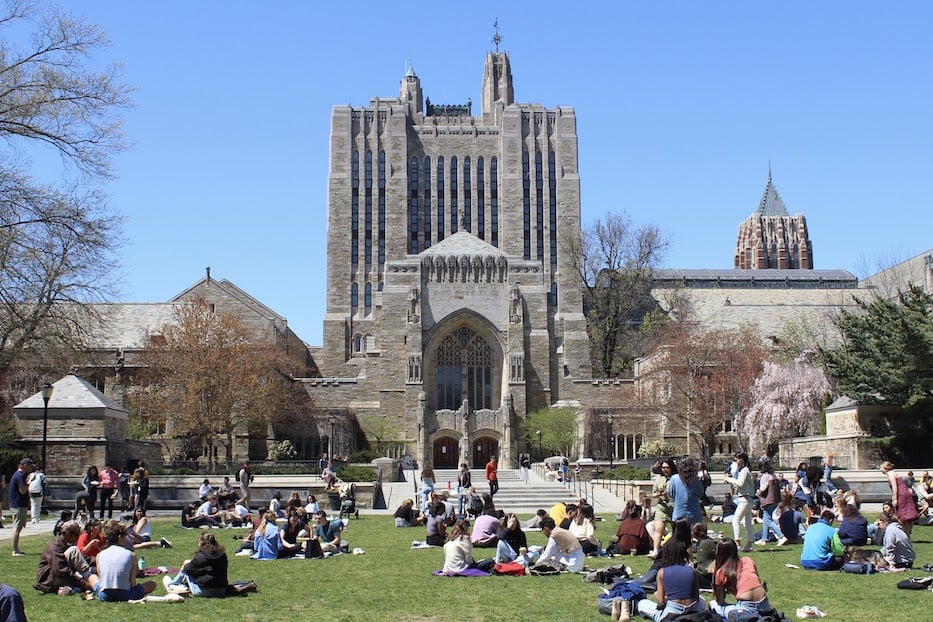 The Earth Day Fest was organized by the Yale Student Environmental Coalition (YSEC) and featured YSEC members and other Yale environmental groups spreading environmental lessons, initiatives, and ways to get involved in climate advocacy. Each group represented in the coalition set up a table covered with different signs detailing various YSEC initiatives. 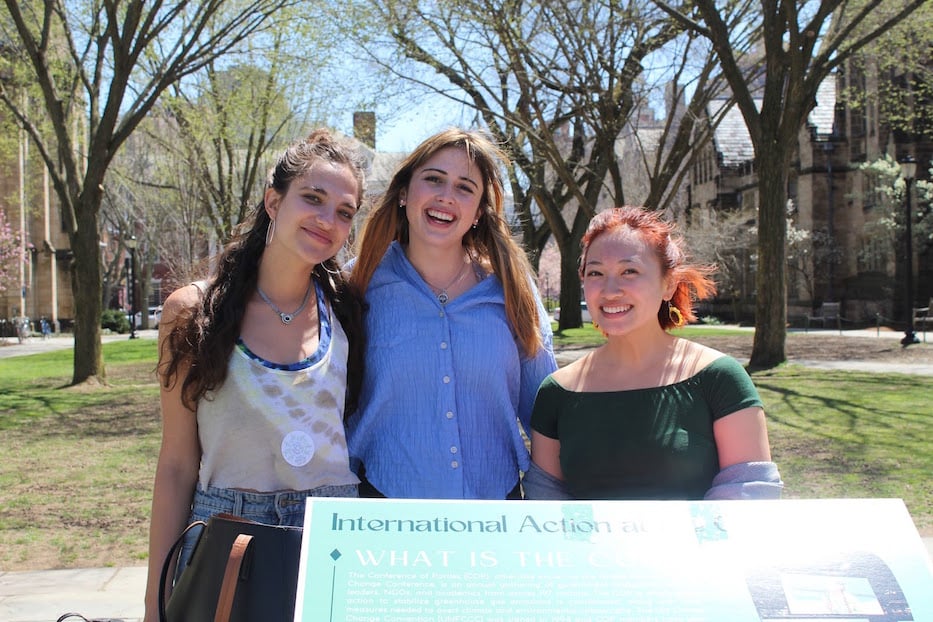 “We’re here to talk to people about the power and limitations of international agreements relating to climate action,”said YSEC member Jamie Chan.

Chan said every year students attend the Conference of Parties, otherwise known as COP or the United Nations Climate Change Conference, an annual climate summit where countries around the world gather to discuss climate mitigation and sustainability efforts.

Daviana Berkowitz-Solar attended COP last year. She described the overall experience as “amazing” and said it was touching to see people openly talk about climate change but was doubtful about the sincerity of promises from elected leaders.

“There were also moments where you don’t know what's going to happen beyond the words” Berkowitz-Solar said.

Despite those flaws, she said she remains optimistic that countries will take climate action through pressure from activists and accountability from other nations.

Saskia Braden, another YSEC member, also attended COP last year. She agreed with Berkowitz-Solar stating that, “There's a lot of big promises that most of the time do not get fulfilled.” Braden said that while the effectiveness of COP can be questioned, it serves an influential role in “global environmental culture,” providing space to deliberate over urgent climate issues.

During the conference, she was delighted to witness the emphasis on minority voices and contribution of youth activists. She stressed the importance of including marginalized communities in climate solutions saying it's important to involve people from “all walks of life.” 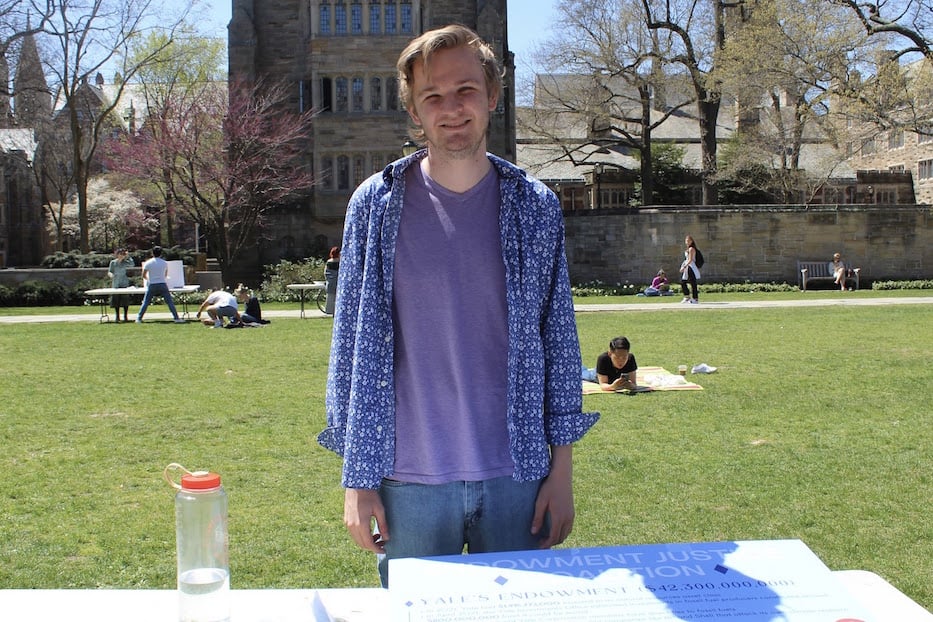 Garrett Frye-Mason represented the Yale Endowment Justice Coalition (EJC) at another table nearby. Frye-Mason said he was drawn to the EJC because of its collective action and how it promotes the value of togetherness and collaborative solutions to institutional problems.

EJC works to stop inequities within the university by looking within the Yale community.  The coalition  uses direct nonviolent action to push for change with their most notable action being the 2019 demonstration at the Harvard-Yale game.

Frye-Mason said  Yale’s $42 billion endowment fund as “unethical” because Yale plays a direct role in the climate crisis through its investments.

“There’s a strong link between climate change and wealth hoarding of institutions founded on the monetization of higher education…From our estimates, anywhere from like $800 million to like $2 billion [of the university’s endowment] is invested in the industry of fossil fuels'' he said.

Frye-Mason said this  year the EJC took a more legal approach to their initiative, filing a complaint against Yale with the state attorney general's office. EJC argued that Yale's investments are unethical and illegal based on nonprofit law. He hopes Yale will “change in a material way, to change the material conditions of climate change and of austerity in New Haven.” 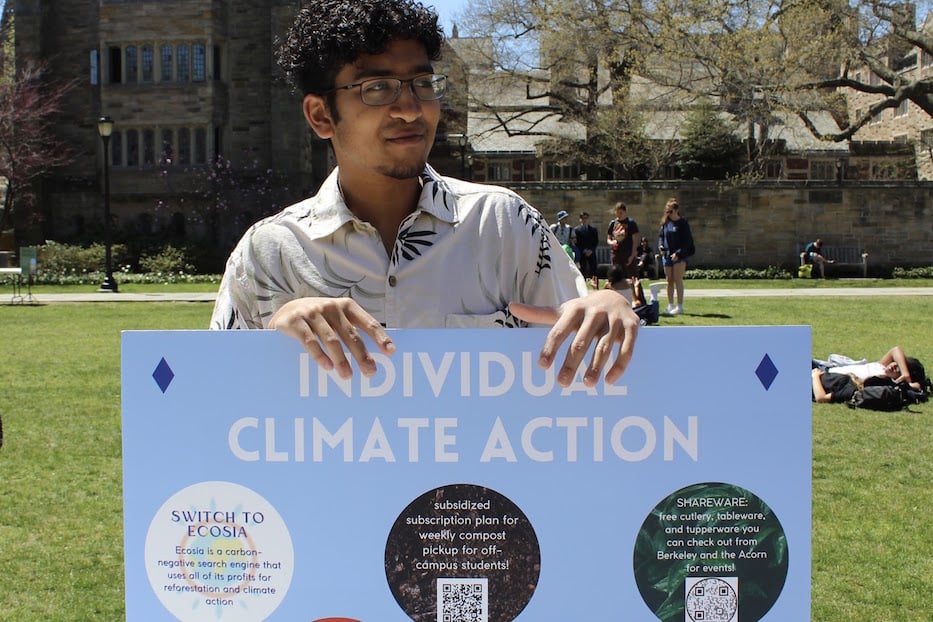 Sheikh Nahiyan, a member of Green at Yale.

Sheikh Nahiyan, a member of Green at Yale, got into climate change from taking a summer seminar class in 2021 called “The Logistics of Climate Change” and has been hooked since.

Nahiyan advised those seeking to get involved in environmental advocacy to look for sustainability organizations on campus because of their need for volunteers. 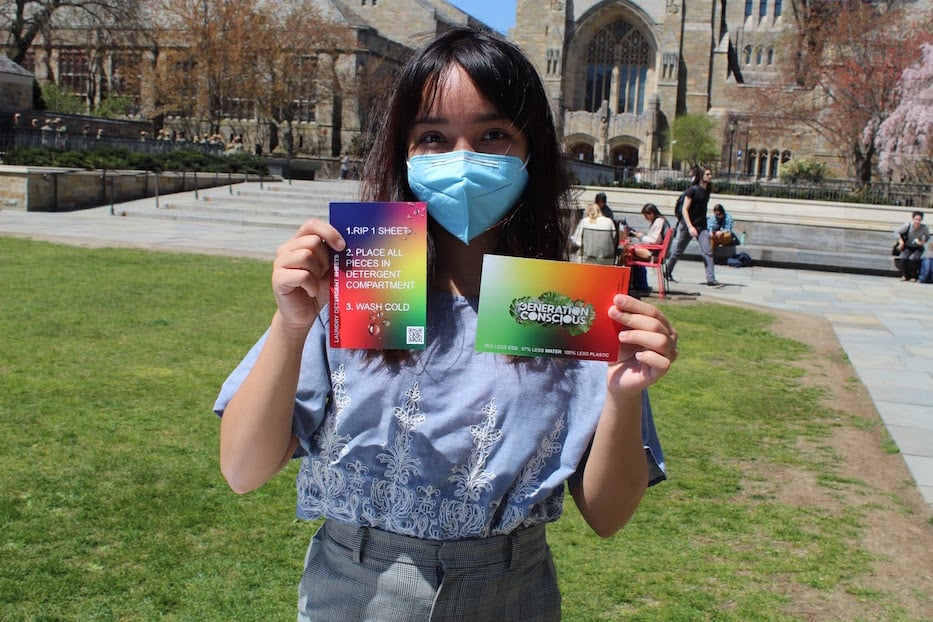 Next to Nahiyan stood Alex Loste, the sustainability liaison for Ezra Stiles College. She’s currently working on Common Closest, a thrift store project at Yale and is also an ambassador for Generation Conscious, a sustainable laundry care company that  advocates for a zero waste refill model.

Loste’s journey into climate advocacy sprung from her concern for her home country the Philippines, and its susceptibility to rising sea levels. 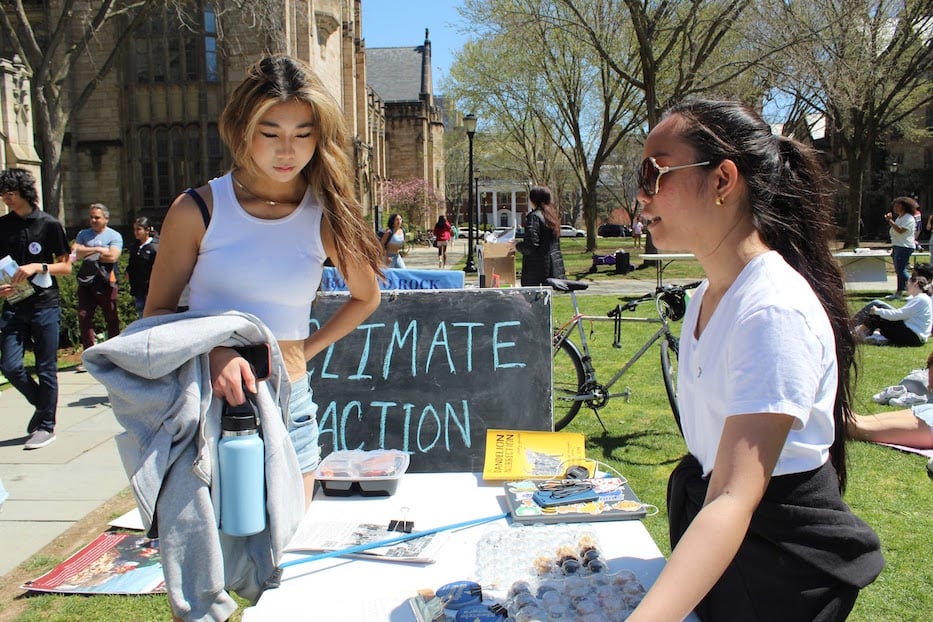 Local environmental organizations were also tabling at this event.

Patricia Joseph, a high school senior at Engineering Science and University Magnet School and member of the New Haven Climate Movement (NHCM), stood at a table answering the questions of curious Yale students.

"A lot of climate work goes into fighting injustices that are already present," she said, noting how climate activism is vital not only from a scientific standpoint but a social standpoint as well.

Joseph’s interest in the New Haven Climate Movement stemmed from attending a webinar featuring teen climate activists during quarantine.  She encourages anyone interested in climate activism to get involved.

“If you‘re really passionate about it, I think you should go for it,” she said. “It's very satisfying to see that you can make a local change even if it's just attending a few meetings.”

This piece comes to the Arts Paper through the fifth annual Youth Arts Journalism Initiative (YAJI), a program of the Arts Council of Greater New Haven. Read more about the program here or by checking out the "YAJI" tag. Abiba Biao is a senior at Achievement First Amistad High School.