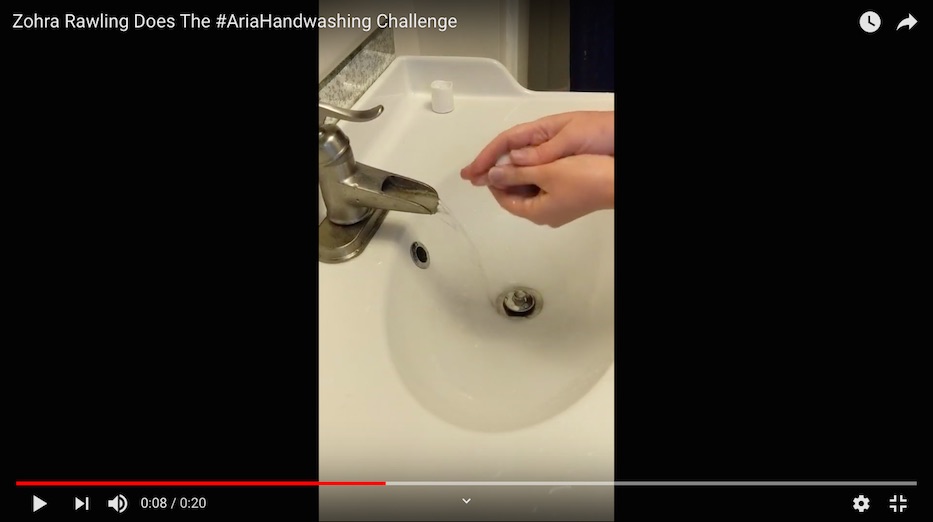 Zohra Rawling turned on the tap and reached for a disc of white soap. She opened her throat and took a breath. Then she issued a new kind of PSA: a public service aria reminding viewers to wash their hands.

And maybe, to add a little Mozart to the mix.

Tuesday afternoon, the West Haven soprano belted into the #AriaHandwashing challenge, started as a Facebook and Instagram meme by baritone Lucas Meachem last Saturday. After Meachem posted a video “for those who are tired of singing Happy Birthday twice” and busted out Gioachino Rossini instead, opera singers from around the world started joining in.

The initial post came one day after the Dallas Opera cancelled performances of Giuseppe Verdi’s Don Carlo, in which Meachem was set to appear as Rodrigo later this month. Across the country, operas, symphony orchestras, and theaters were closing their doors for the health and safety of their performers and their patrons.

While the Metropolitan Opera is offering free, nightly streams of its “Live In HD” feature, thousands of musicians are suddenly out of work.

Without a stage, operatic vocalists have turned to their sinks and bathroom mirrors. By Tuesday, there were close to 20 videos across different platforms, spanning at least six different countries and several states in the U.S.

Some people, picking up their soap, launched into selections from Georges Bizet’s Carmen. Others thought Richard Wagner’s The Flying Dutchman fit the mood. Others sang in Italian, as if in solidarity with one of the communities hardest hit by the COVID-19 outbreak.

Several have opted for Wolfgang Amadeus Mozart, from Così fan tutte to Die Zauberflöte (The Magic Flute). Rawling joined Tuesday afternoon, with 20 soaring seconds of the “Der Hölle Rache” (Queen of the Night) aria.As she passed the soap from palm to palm, sudsing up, her voice floated over the running water. In an absence of an orchestra, it would have to do.

“I think it’s wonderful,” she said afterwards. “Performing is on hold, but we are still practicing our craft. Why not have some fun while we are at it?”

“Music can be such an isolating career,” she added. “Like an iceberg, what you see is such a minuscule amount compared to what there is underneath. I’m grateful for social media bringing artists together while we collectively wait to hear when we may return to work.”