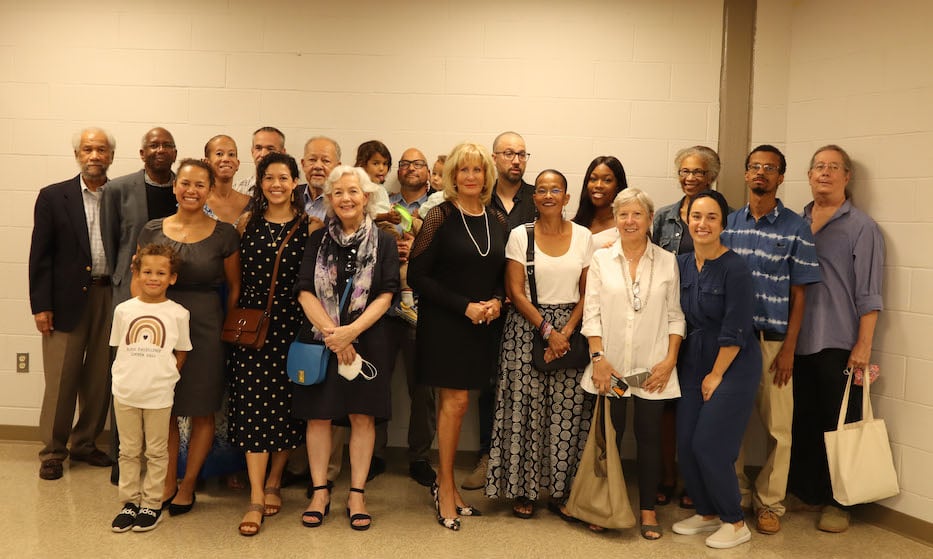 An activist and advocate who looked at a problem, and found the solution. A community builder. A devoted father who taught his children to fight for a more just city.

Those are some of the words used to describe Courtland Seymour Wilson, a Hill neighborhood activist who died in 2000, and became the namesake for the Hill neighborhood branch of the New Haven Free Public Library (NHFPL) in 2006. Saturday morning, roughly 40 family members, friends, and NHFPL staff gathered at the Washington Avenue branch to celebrate a plaque in his honor.

While it was installed last year, the library waited until 2022 to celebrate because of the ongoing Covid-19 pandemic.  This event marked attendees' first reunion since the passing of Courtland's wife, Ruth Isabel Herb Wilson. All of Wilson’s children were present with the exception of his son Jon Wilson, who was unable to attend.

“He threw wrenches into the system of decision making … He worked to figure out how to get resources from where they’re at, to where they need to be,” Wilsons’ daughter Ruth ‘Ruthie’ Wilson Gilmore said. 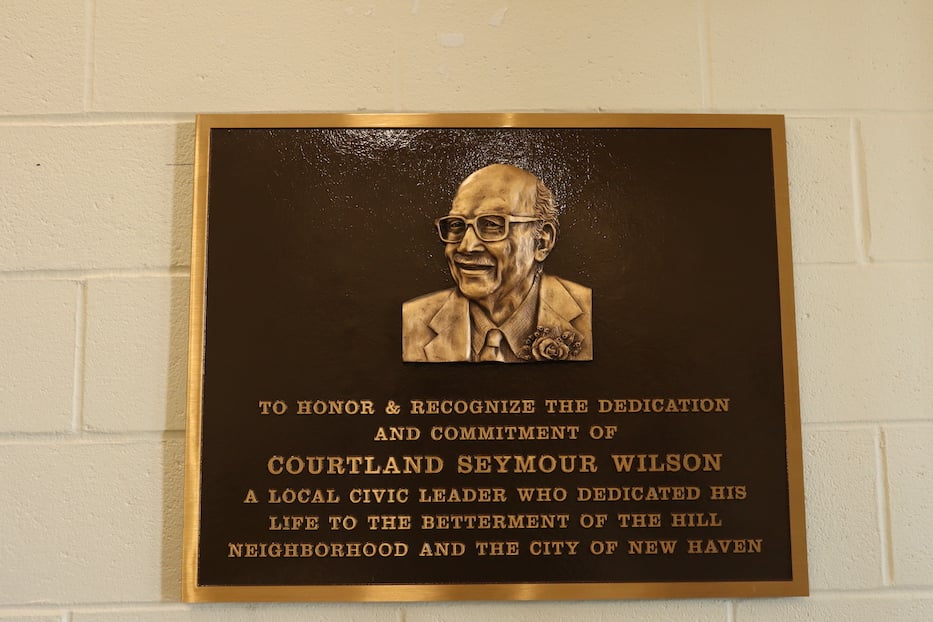 Born in 1918, Wilson was a pillar in the New Haven community for years, working as a tool and die maker for the Winchester Corporation before continuing his work at Yale University’s Physics lab. He went on to work toward equity and inclusion for the Yale Medical School as assistant dean of student affairs before serving as executive director at the Hill Housing Corporation.

Those are  a few of the many highlights of Wilson’s career of changemaking in the community.

After a few remarks from library officials, Courtland’s children, grandchildren, and friends shared the impact of Wilson’s legacy on their lives.

Peter Wilson began by acknowledging his father’s impact on the Hill neighborhood itself. Even though he and his family were not technically from the Hill, he said, they became a part of the neighborhood through his father’s work.

“I don’t think there’s any section in New Haven that has more individual affordable housing than the Hill,” he said.

He also spoke to the “poetic justice” of the library’s location, which was once the home of Leon’s Restaurant. Peter recalled his father and mother telling a story of attending the restaurant, and not being served there.

“He threw wrenches into the system of decision making … He worked to figure out how to get resources from where they’re at, to where they need to be,” Wilsons’ daughter Ruth ‘Ruthie’ Wilson Gilmore said. Olivia Charis Photos.

Cortland’s daughter, Ruth ‘Ruthie’ Wilson Gilmore , a professor at the City University of New York who has been working as a prison abolitionist for years, noted the importance of the library in preserving the histories of past generations.

“In order to abolish prisons we must create other things,” she said. She noted recent efforts to “censor libraries” against the histories of people like her father.

“This cannot stand,” she said. Public libraries are “one of the last places where we have a public space for the public.”

Ruthie said she fought with her father all the time, but that she loved it because “He always gave you a chance…as long as you were respectful.”

Many also attested to the teaching side of Wilson’s character. His granddaughter, Eva Wilson, recalled sitting underneath his desk at his Hill Corporation office when she was a little girl. She said she loved “feeling the energy” of change he created at work.

“I feel like I was always learning with them [her grandparents],” she said.

Courtland Wilson Jr. also shared how he learned through his father. “I just watched him [at work] and there was nothing that man could not do.”

Courtland Jr. recalled when his father began proctoring exams at Yale Medical School. Wilson would go on to write a program proposal to the U.S. Department on Health, Education, and Welfare for diversification of the school.

“I was at home on 266 Goffe Terrace the day he switched vocations,” Courtland Jr. said. He remembered a Friday afternoon around 4  p.m., sitting at the kitchen sink with a view of the front door. When his father walked in with his tool and die box, Junior thought his dad had been fired. He would soon come to know that Wilson had “traded his apron and tools for a jacket and tie” and would be hired by Yale to run the program he had proposed. 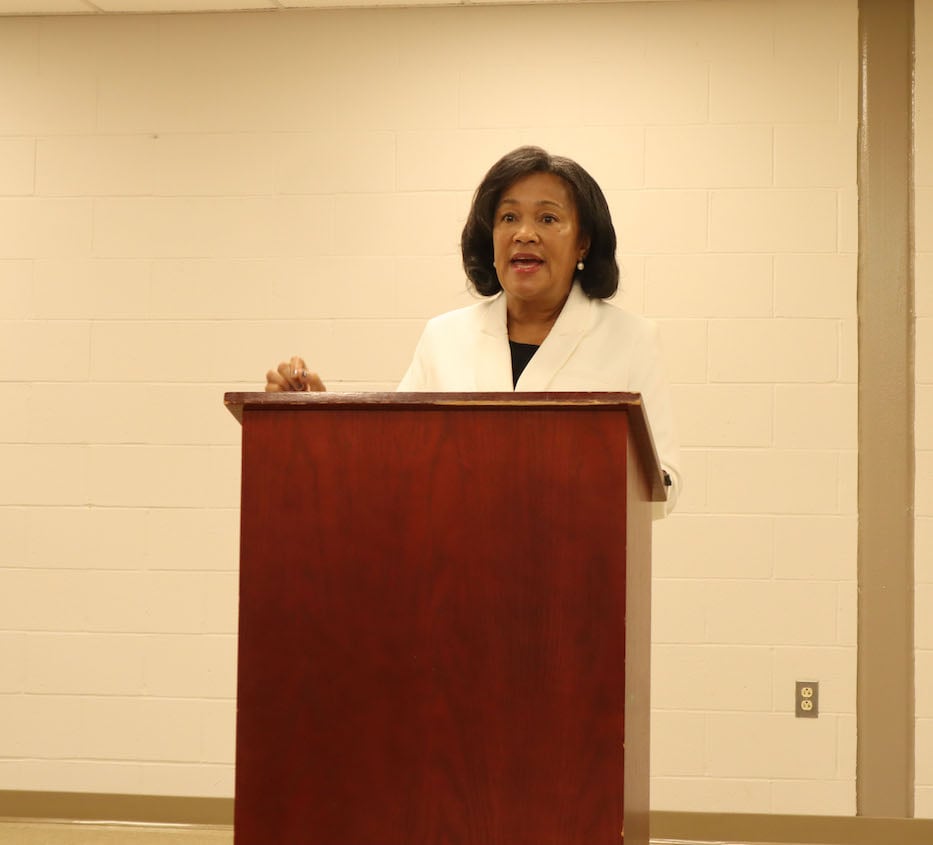 Even those who were not blood relatives noted how deeply connected with Wilson their lives became because of who he was. Former Mayor Toni Harp, who served as the  first woman mayor of New Haven, said Wilson was a mentor to her.

“If you see something that needs to be done you should say something and then do something about it,” Harp said, summarizing what Wilson’s extensive work for the city taught her.

She specifically noted his work in housing development. “Courtland Seymour Wilson understood how housing stabilizes communities. [The Hill] was a neighborhood that was just—in distress to put it mildly, and then five to ten years later it is one of the most active communities in our city,” Harp said.

Paul McCraven and his wife, Dr. Cynthia McCraven, said that Wilson’s son introduced them on a blind date.

“Courtland was a father to me,” Paul said, recalling a time Wilson went out of his way to give him a work reference.

Cynthia, who attended Yale Medical years ago when it was “at the beginning of their look at diversity and equity” said that Wilson emphasized teaching them how to be providers for people of color. This was not a central focus of current professors.

“Before there was the title!” Ruthie proclaimed from her seat. 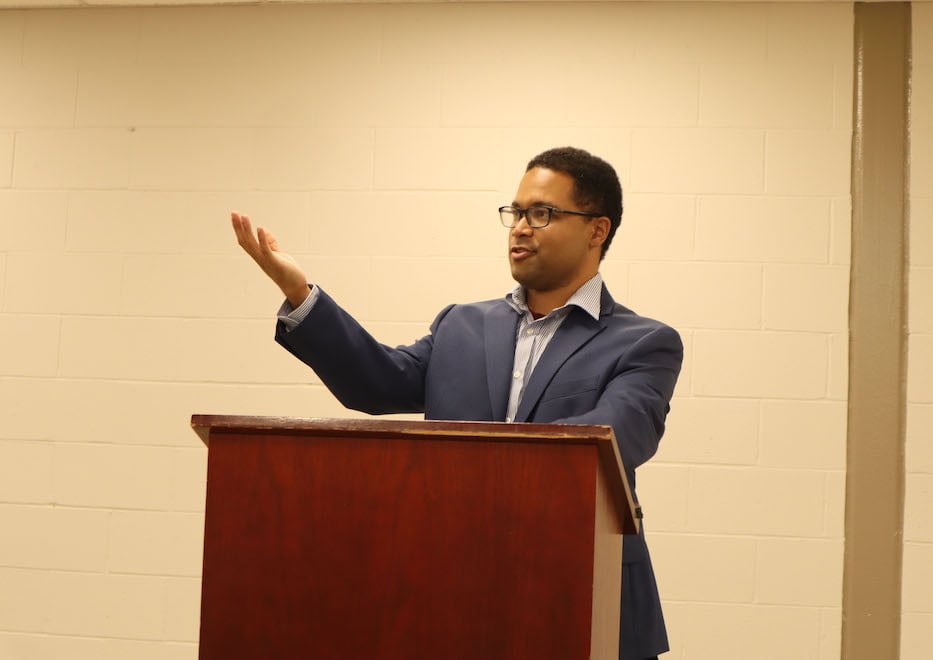 NHFPL Deputy Director Luis Chavez-Brumell, who served as the branch manager at Wilson from 2018 to 2020. Olivia Charis Photos.

Courtland Herb Wilson II, one of Wilson’s grandsons, looked at his two toddlers that were present Saturday before looking back to the audience.

While in Accra, Ghana two weeks ago celebrating the 59th anniversary of Du Bois' death, Morand noted a quote he saw at the activist’s mausoleum.

Paraphrasing, Morand said that “the only death is to give up hope … to believe that because time is too long that change can’t happen.”

“Du Bois and Courtland Wilson both lived nine decades and were oftentimes one of only a few out there pushing things,” he said. Morand added that Wilson's fearlessness is at the heart of “the generative power” of the Wilson Branch Library.

“Every generation that comes is a Courtland Seymour generation and it will continue on forever."