CWOS Takes A Deep Breath, And Kicks Off 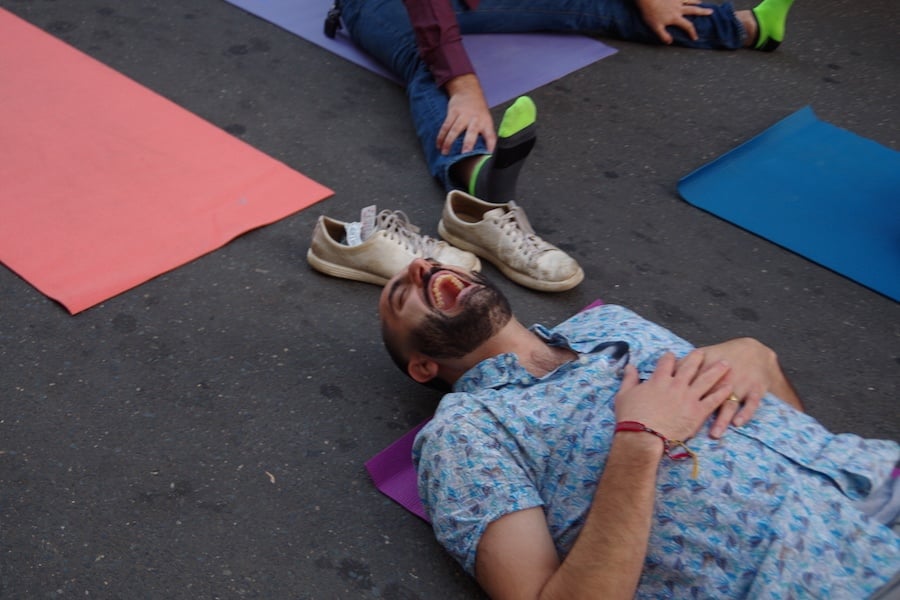 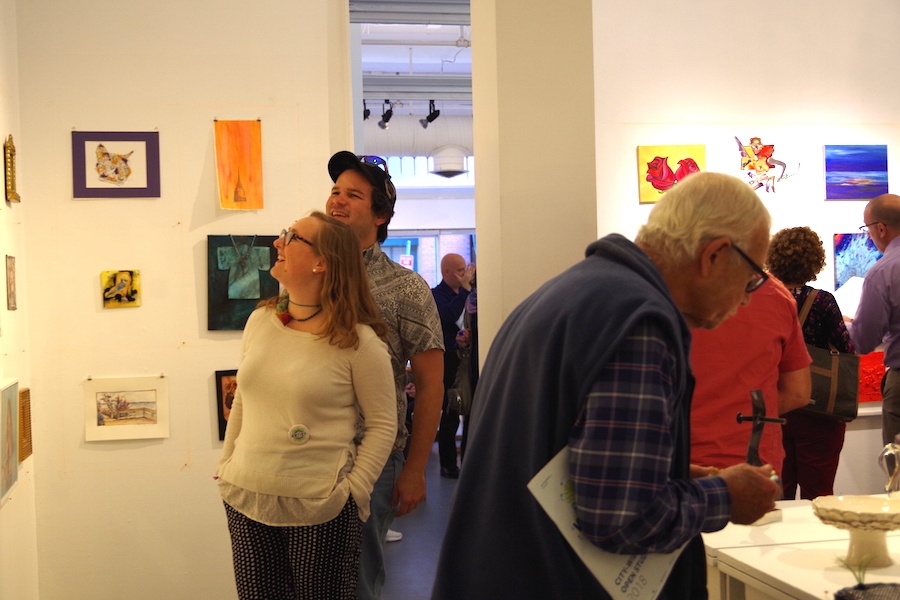 Elinor Slomba was bouncing outside of Artspace, ensuring that maps got handed out, forms had ben signed, and artists were good to go. As attendees began to enter the space, she gave out four or five hugs in a row. The night, she said, was “just good people loving on each other.”

Friday evening, emerging and established artists alike gathered at Artspace New Haven to kick off the 21st annual City-Wide Open Studios (CWOS), a month-long celebration of arts and culture around the city. Close to 500 attended the event, which doubled as Town Green Special Services District’s “Noodles On9” first Friday celebration.

This year, Artspace has built its events, weekends, and a generous handful of specific commissions around the theme of “wellbeing.” With New Haven's historic Goffe Street Armory no longer safe to use, its signature site-specific weekend will be held on Yale University’s West Campus, in a building attached to the Yale School of Nursing. More information is available on the organization’s website.

Friday night, that theme came to life inside Artspace as Orange Street partied outside. Particularly striking was the formal emphasis on the reclamation of materials. In work 475—otherwise unlabelled—the artist had fashioned a mask from a cardboard box, with plastic cuttings as multiple rows of eyes and ears. The cuttings protruded out of the top, almost like an "on" button. 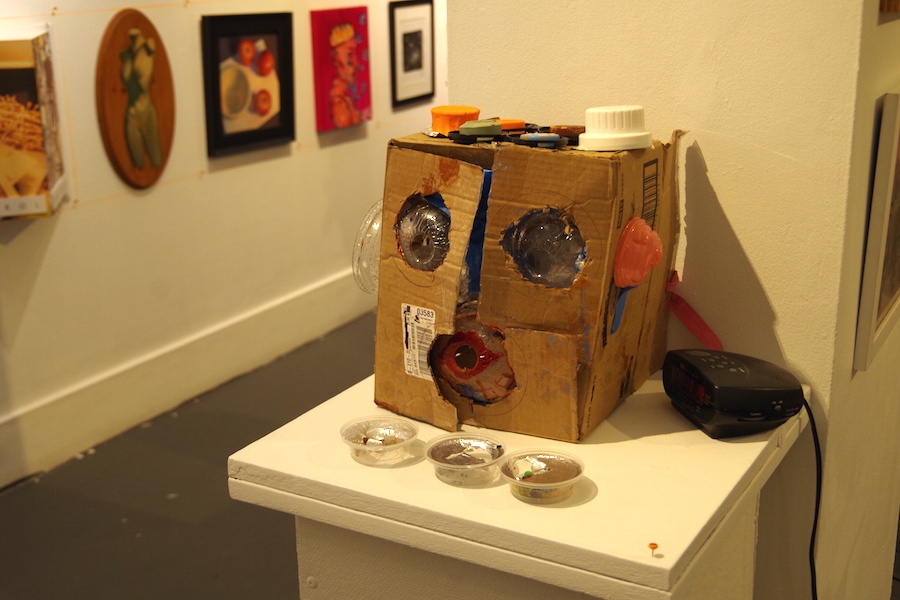 The robotic, yet familiar sense of the piece brought the viewer into uncanny relief, as if the face looking back at them was made of their own trash. Here were previous intimate objects allowed to look back at their creator. They made the viewer recognize their own responsibility to the planet as they would recognize another human being.

That extended to Colin McMullan’s video work Tree Spa for Urban Forest Healing, as an actor who plays “the professor” weighs the densities of soil from beyond and within a border using a makeshift scale. The professor spoons in the soil gently and notes its qualities, remarking to himself as he examines it. The cinematic production suggests a closeness to the viewer, implicating them in the act of judging the soils and finding them equal. How could it be otherwise?

On another wall, Jay Bright has continued his American Flag series, in which he examines the reality of the flag as opposed to its symbolic nature by embedding it in its everyday contexts. This piece features a flag inside the grill of a black Jeep, reminiscent of a painting in his series featuring the flag in the light of an ambulance. Both works have a sense of drama, the ominous black surrounding a segmented flag. It’s visually incongruous, which causes the viewer to reconsider the flag, as a part rather than a unified symbol. 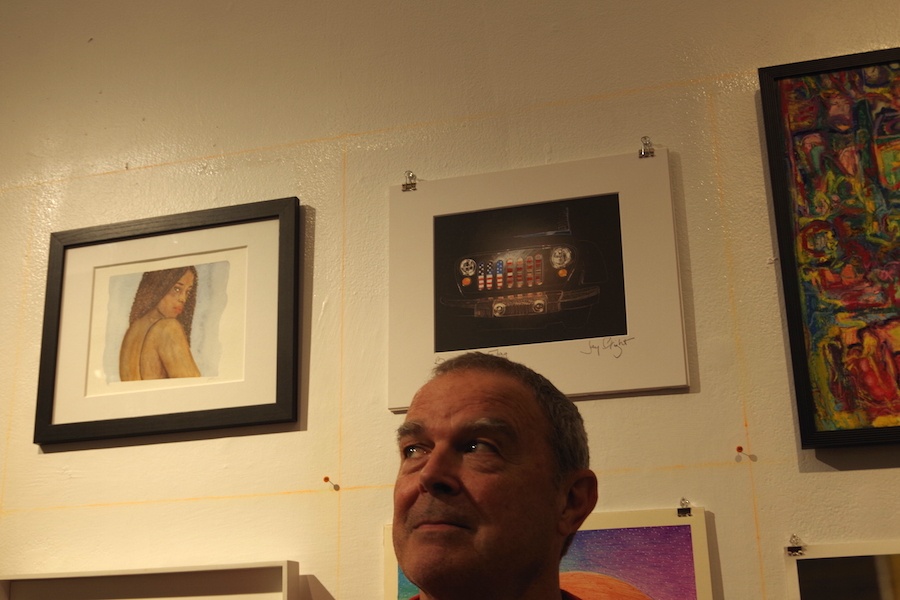 These works were presented alongside healthy doses of comedy. Zoe Matthiessen’s work features a screen capture of Space Invaders inside President Donald Trump’s head, facing out of a black background. The piece centers around an absurd psychology of power, pointing out that the president sees enemies everywhere. There is no player present in the window into the president's mind, underscoring a sense of impotence despite the desire to attack.

Attendees had a similar view of what it means to engage in well-being. Looking around them, attendees Eric Epstein and Kevin McCarthy praised the diversity of the crowd–children, adults, older adults, people of color, representatives of the queer community were all in attendance. Others suggested an emphasis on caring for yourself, and fostering community in which people can rely on one another. Artspace Board Member R. Lee Stump emphasized that this year’s CWOS was an opportunity for people to “recover, find themselves, and make peace” in a visceral, community-based way.

The space was filled with a spirit of catching one another at the most vulnerable. Friends and friends of friends and just-made friends asked after each other, laughing over sake, beer, and Mecha noodles. Yoga novices and street Bodhis alike stretched with one another in a small yoga class, then danced out their tensions in the street. 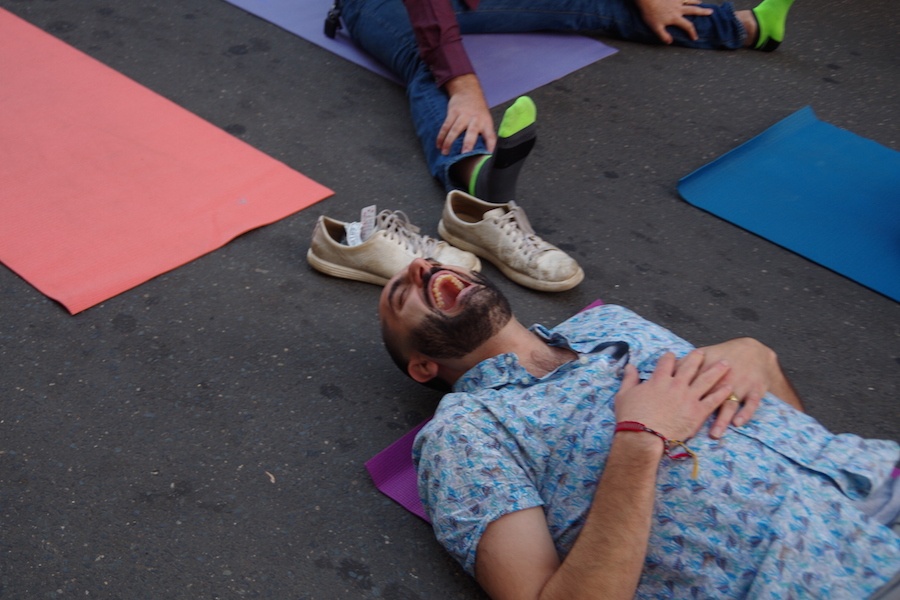